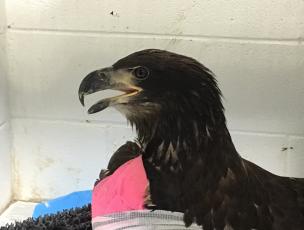 On June 4, a young Bald Eagle was found down on the ground near an active eagle nest in Midlothian, Virginia. The bird was unable to fly and was captured and taken to a local permitted wildlife rehabilitator, who found a fracture in the eagle’s left wing. The eagle was transported to the Wildlife Center the following day.

Dr. Dana examined the hatch-year Bald Eagle when it arrived; the bird was bright and alert. Dr. Dana suspects the eaglet is female based on measurements and weight; the eaglet weighed in at 4.0 kg and had a body condition score of 2.5/5. Dr. Dana carefully examined the fractured wing via physical exam and radiographs. The fracture of the left major metacarpal appeared to be two or three days old and was closed (not through the eaglet’s skin), complete (broken into two pieces), and mobile (no healing had taken place). The soft tissue surrounding the injury was swollen and bruised. No other injuries were found. 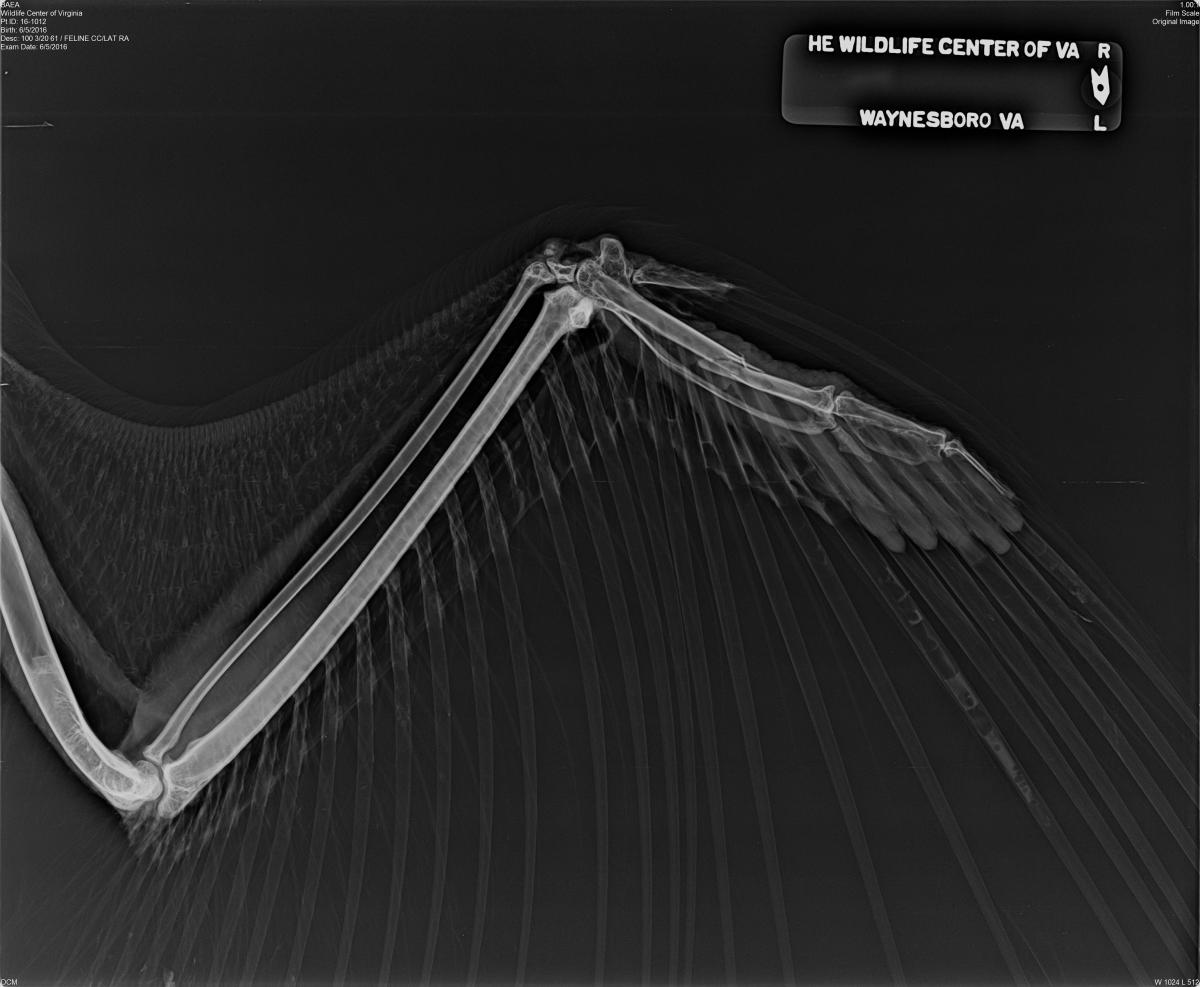 Dr. Dana carefully splinted bandaged the wing,and started the bird on anti-inflammatories and pain medication. A surgical repair will be performed when the swelling around the injury has decreased; Dr. Dana hopes to attempt surgery on June 9 or 10.

Your special donation will help the Center to provide care to this Bald Eaglet …and to the 2,500 sick, injured, and orphaned wild animals the Center will treat this year.

The release of Bald Eagle 16-1012 went smoothly on September 28. A crowd of about 70 people gathered to observe the eagle's return to the wild. 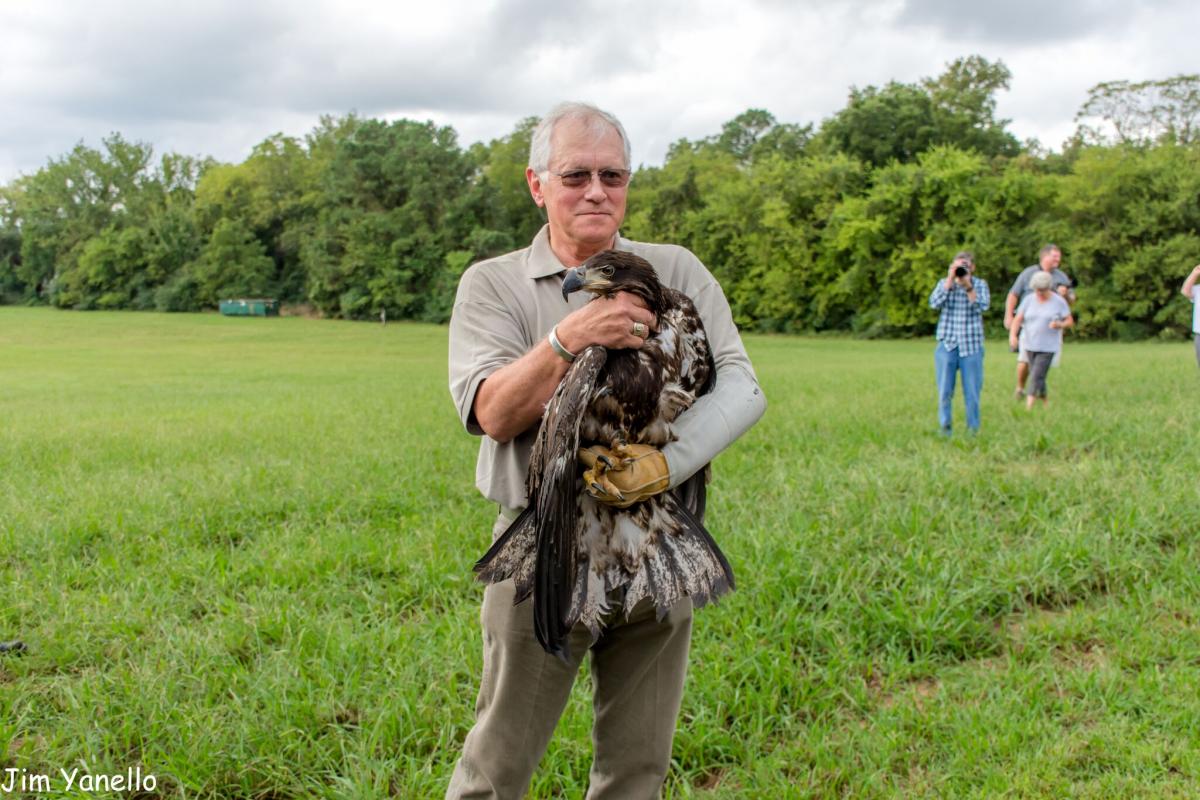 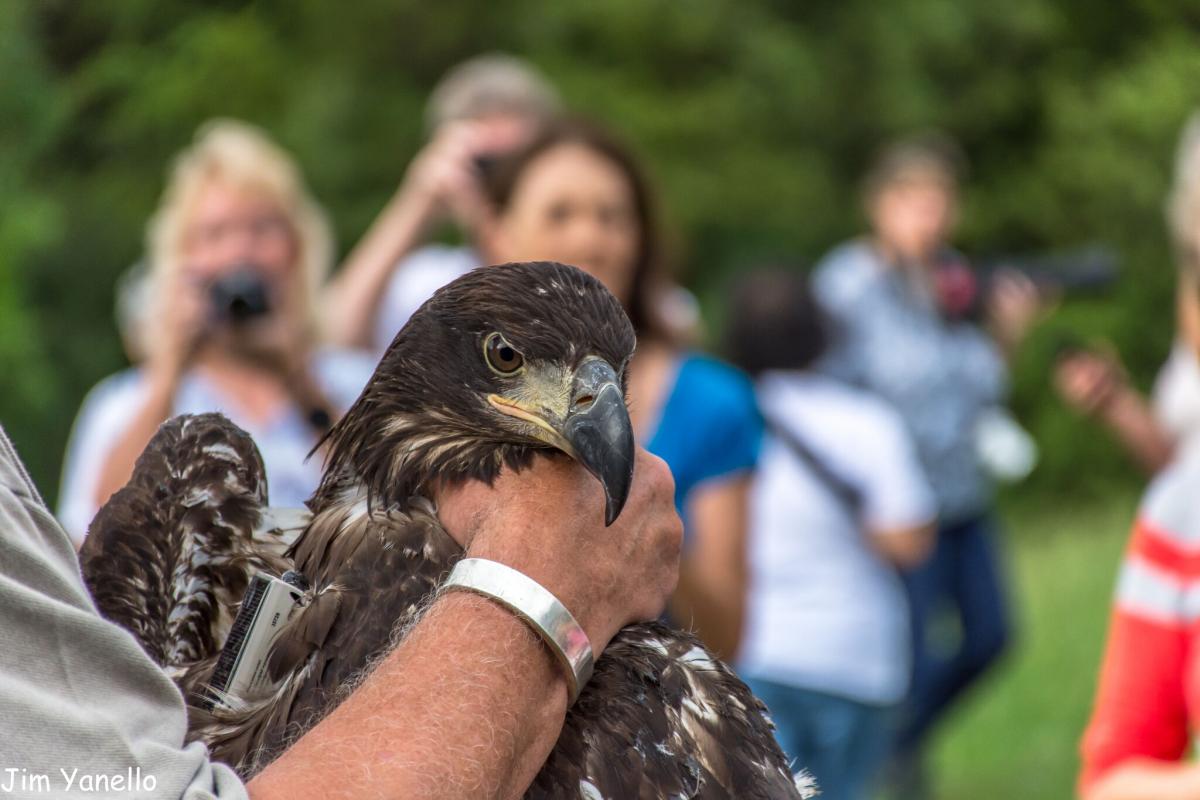 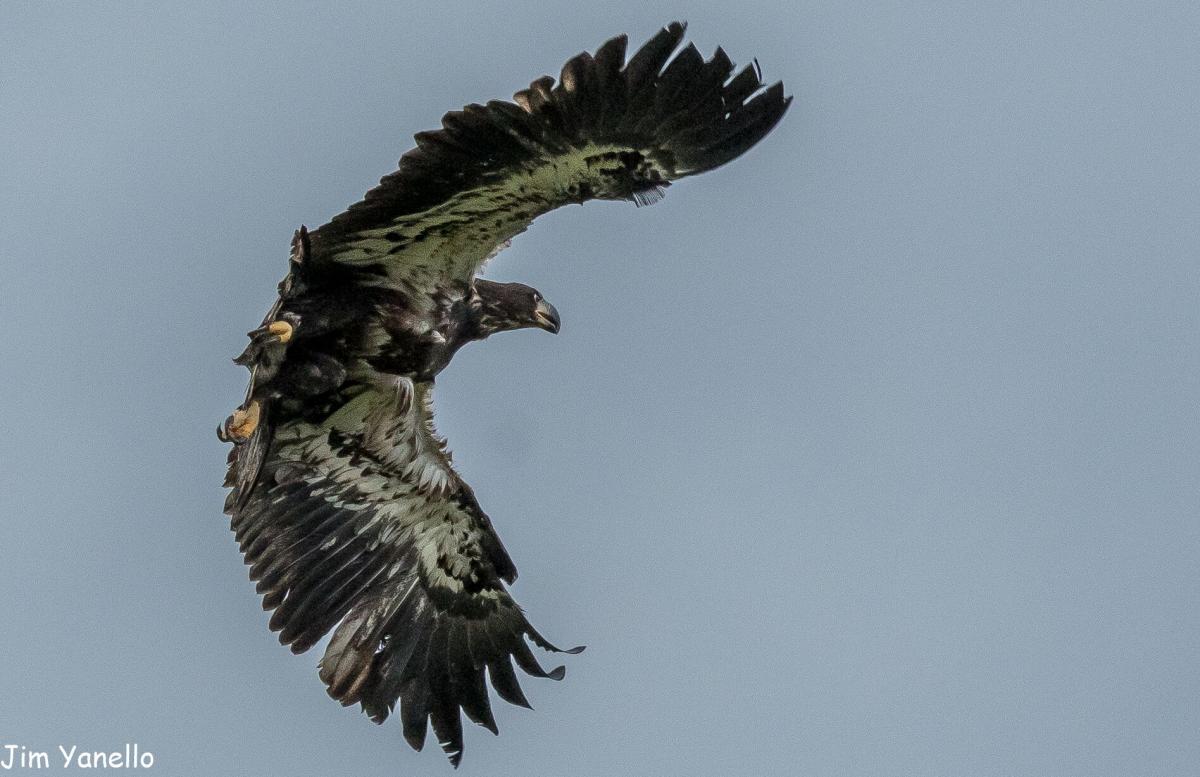 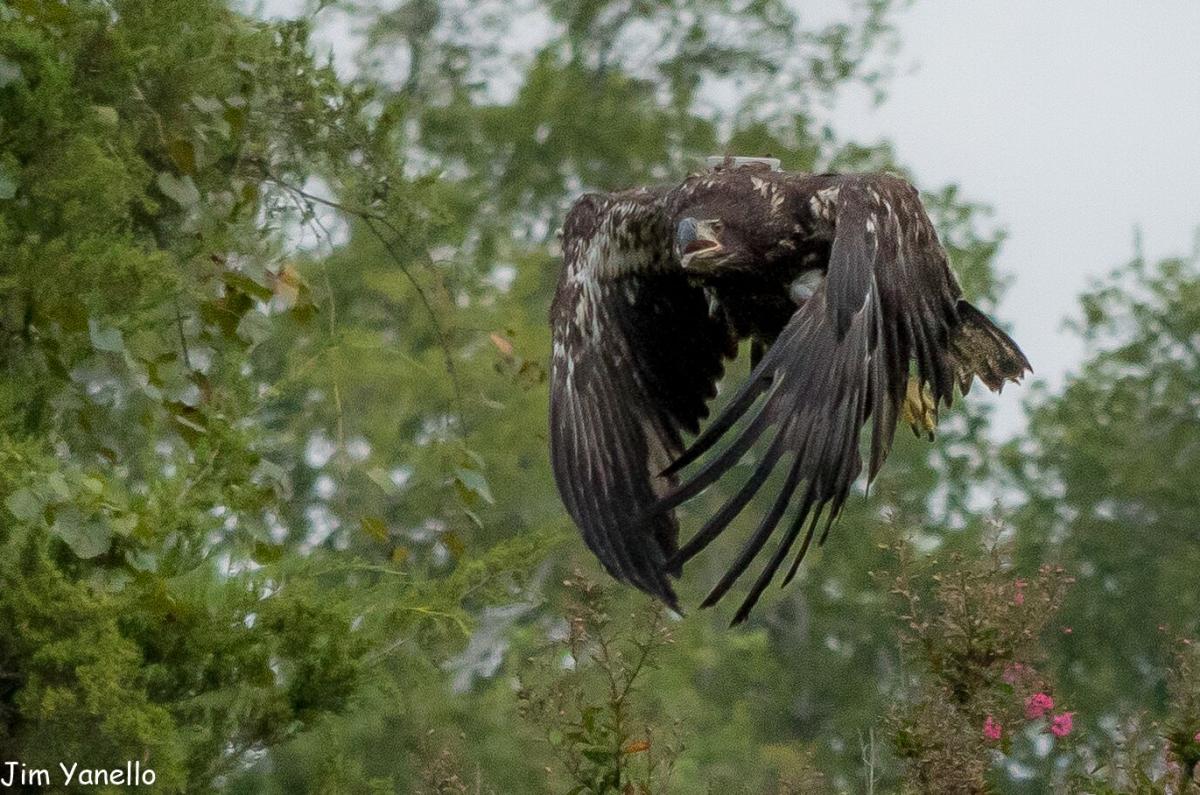 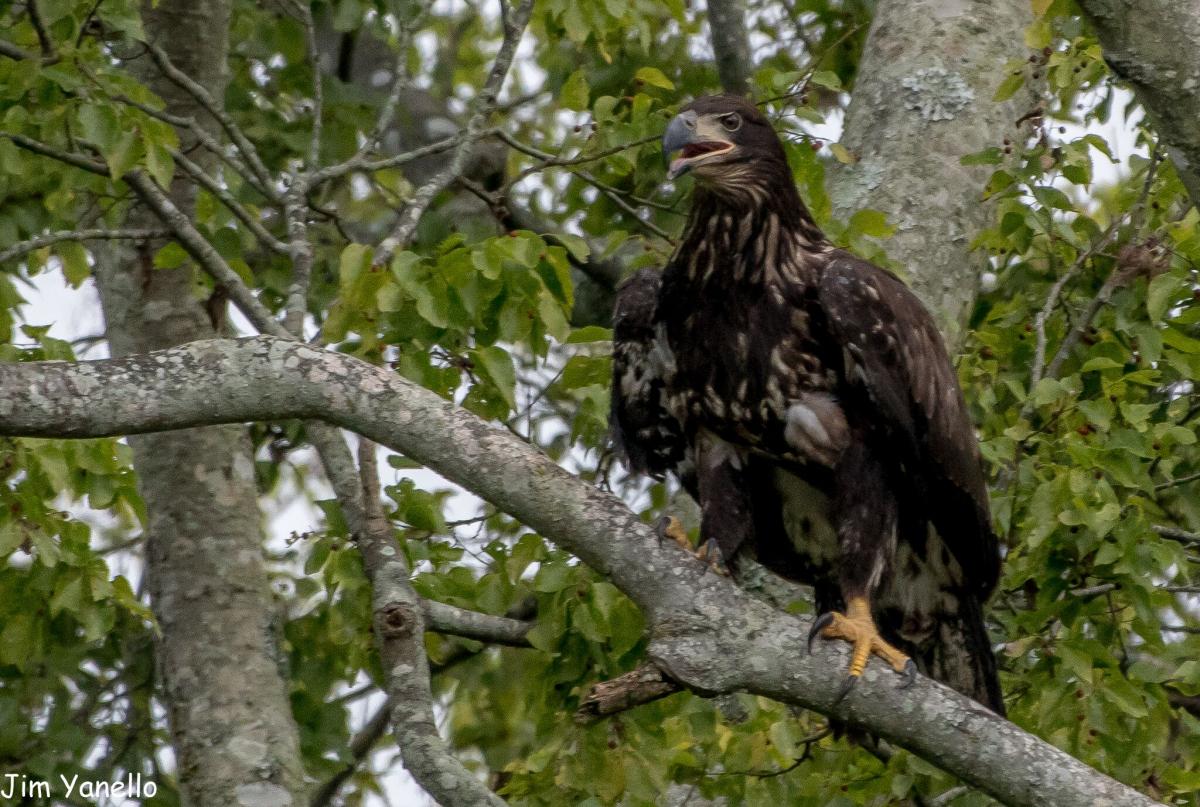 On Wednesday, September 21, Bald Eagle #16-1012 had blood drawn for pre-release analysis. Dr. Dave also fitted a GPS transmitter on the eagle, which will track the bird's movements post-release. The eagle was returned to the flight pen for additional time to fly while wearing the GPS transmitter.

The young eagle will be a part of an ongoing research study that will monitor eagle movements. This study looks at the data received from these tracked Bald Eagles to determine the range and behavior of Bald Eagles in Virginia’s coastal plain. Migratory behavior is studied as biologists are able to see how far Bald Eagles move in the winter season, and the data will play an important role in modeling how these birds use airspace. By looking at heights at which the eagles fly, average distances, and other specifics, biologists are able to relate this eagle behavior to real-life issues, such as airstrike data. During the past few years, VDGIF Biologist Jeff Cooper has fitted dozens of Bald Eagles with GPS transmitters.

After two more days of flying well with the GPS transmitter, the bird was cleared for release. The eagle will be released on Wednesday, September 28 at 12 noon at Berkeley Plantation [12602 Harrison Landing Road, Charles City, Virginia 23030]. The release is free and open to the public. If attending, please RSVP to lkegley@wildlifecenter.org.

Attendees are encouraged to visit the gift shop; Berkeley Plantation is offering a 10% discount on tours to eagle release attendees. 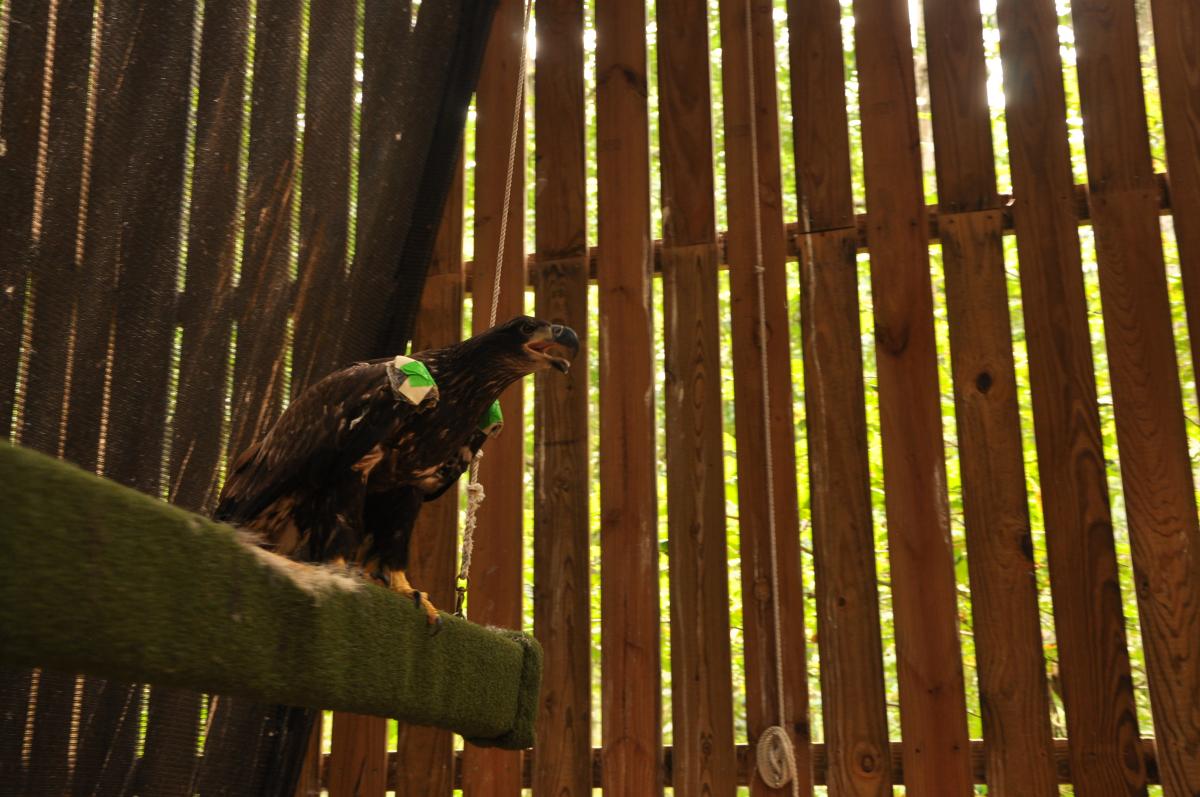 Bald Eagle #16-1012 has been flying well during the past few weeks. The eagle is currently flying at least 15 passes during each daily exercise in flight pen A3, and has a strong, steady, even flight. The rehabilitation staff feel that the eagle will be ready for release soon. The veterinary team will schedule blood work within the next few days and will also fit the Bald Eagle with a GPS transmitter. As long as blood work results are within normal limits, and the eagle adjusts to the transmitter, the team will work on scheduling a release within the next two weeks.

On August 7, Bald Eagle #16-1012 was moved to one of the large outdoor A-pens. The following day, the eagle was able to fly two complete lengths of the enclosure and has been showing signs of slow progress since then. On August 21, the eagle completed seven full lengths while maintaining an acceptable altitude and successful perching ability. Rehabilitators will continue to carefully monitor and exercise the eagle to determine the possibility of release.

Bald Eagle #16-1012 healed well in the weeks following her surgery. Two-week post-op radiographs were taken on June 23 and showed evidence of healing; on June 29, the veterinary team removed the stabilizing external fixator from the eagle's wing. The healing fracture remained bandaged, and the team began physical therapy on the bird's wing to encourage extension and mobility.

Four-week post-op radiographs were taken on July 7; the veterinarians were pleased to see a very stable fracture site. The bird was moved to a small outdoor C-pen enclosure for additional cage rest.

On June 9, Dr. Dana took Bald Eaglet #16-1012 to surgery to repair the bird's left major metacarpal fracture. Dr. Dana was able to achieve good alignment of the fractured bone and placed an external fixator to stabilize the fracture. Four pins, stabilized by a sturdy external bar, will hold the fractured bone in place during the next few weeks. The bird's wing was bandaged, and the eaglet recovered from anesthesia well in the Center's holding room. 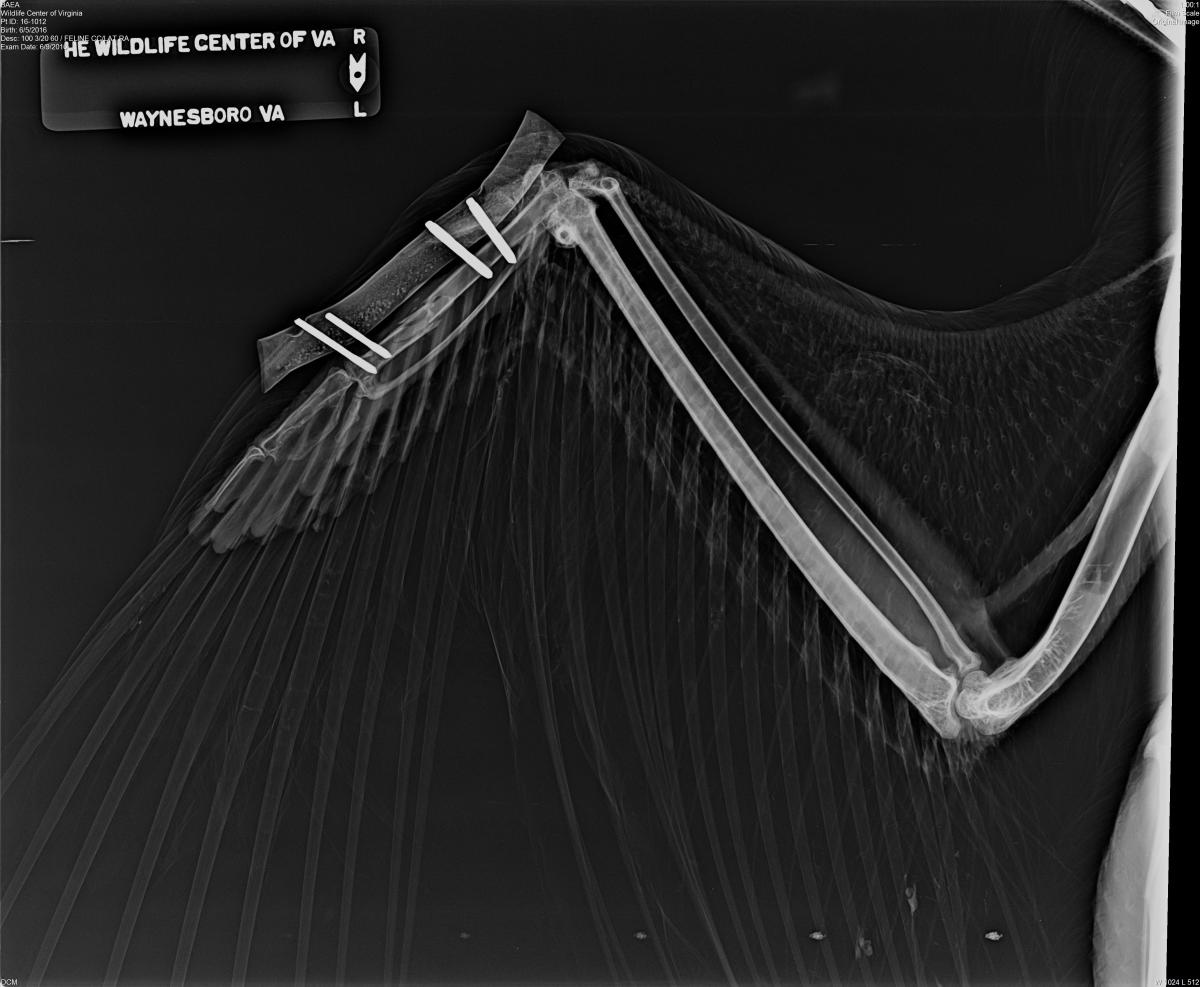 In the week following surgery, the fracture site was checked and cleaned daily. The bird appears to have good extension in the wing, and on June 15, the veterinary team began a course of physical therapy on the eagle. Every three days, the bird's wings will be stretched and extended, so ensure that the wing muscles do not become stiff and contracted as the bone heals. Follow-up radiographs are scheduled for June 23.