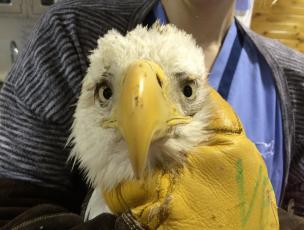 On January 27, a mature Bald Eagle was hit by a car in Sussex County, Virginia. The bird was captured by a Department of Game and Inland Fisheries biologist, who took the eagle to a local veterinary clinic for stabilization. A Wildlife Center volunteer transporter drove the Bald Eagle to the Wildlife Center on January 28.

Dr. Helen, the Center’s veterinary fellow, examined the eagle upon admission. The eagle was standing in the crate and appeared to be very bright and alert. The eagle was quite large and weighed in at 5.8 kg – Dr. Helen noted this is the largest eagle she’s ever admitted!

Dr. Helen anesthetized the bird for a full physical exam and radiographs; the veterinarian who initially stabilized the bird had bandaged the eagle’s wing after finding a left ulnar fracture. Radiographs confirmed multiple fractures of the bird’s left ulna; several small metallic pieces were also noted in the bird’s ventriculus (stomach). It’s unknown what the metallic fragments are at this point though they appear to be wire-shaped. The eagle tested positive for lead at a level of 0.343 ppm; while the bird wasn’t exhibiting any clinical signs of lead toxicity, the Wildlife Center typically treats eagles that have a lead level of more than 0.20 ppm. 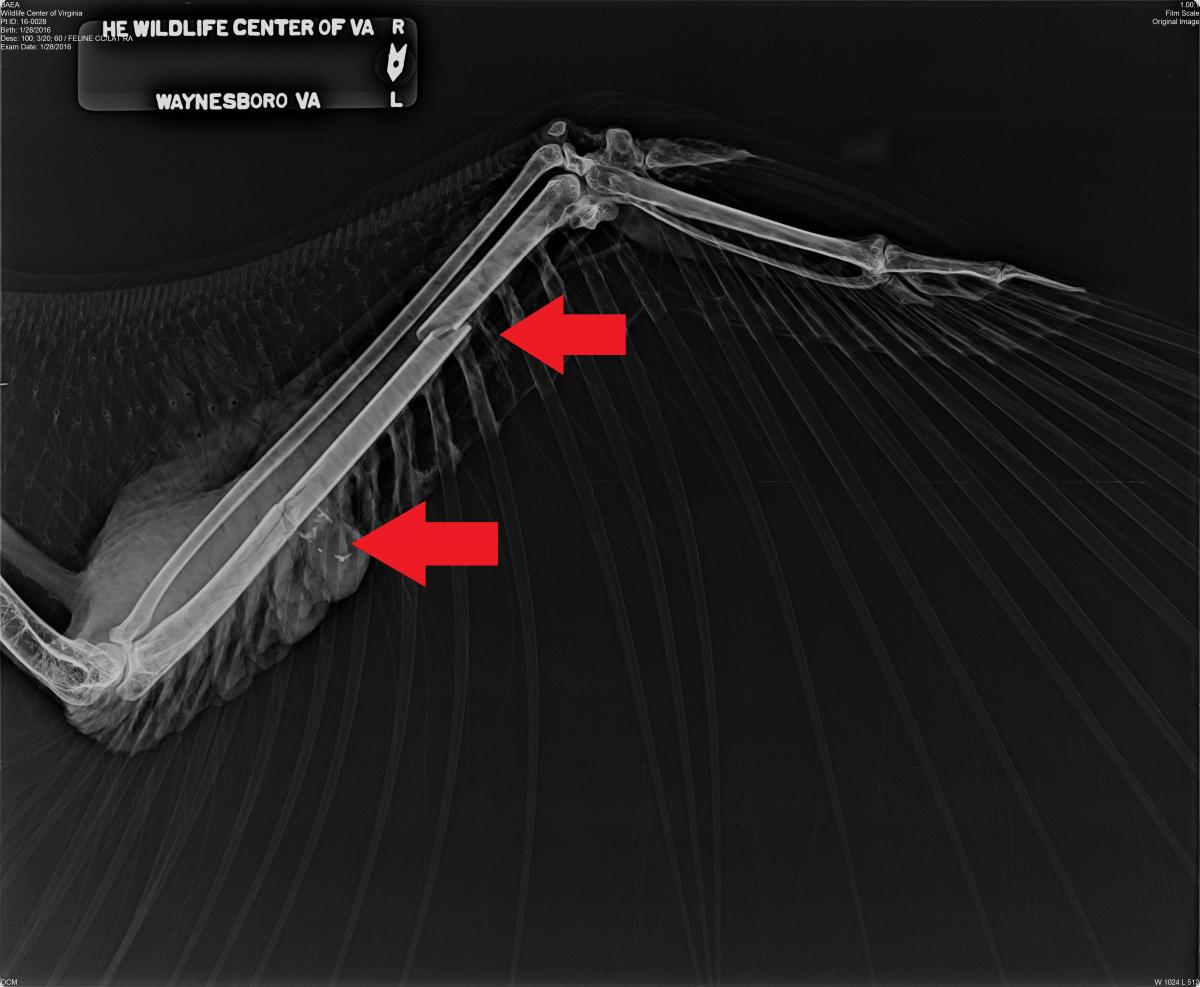 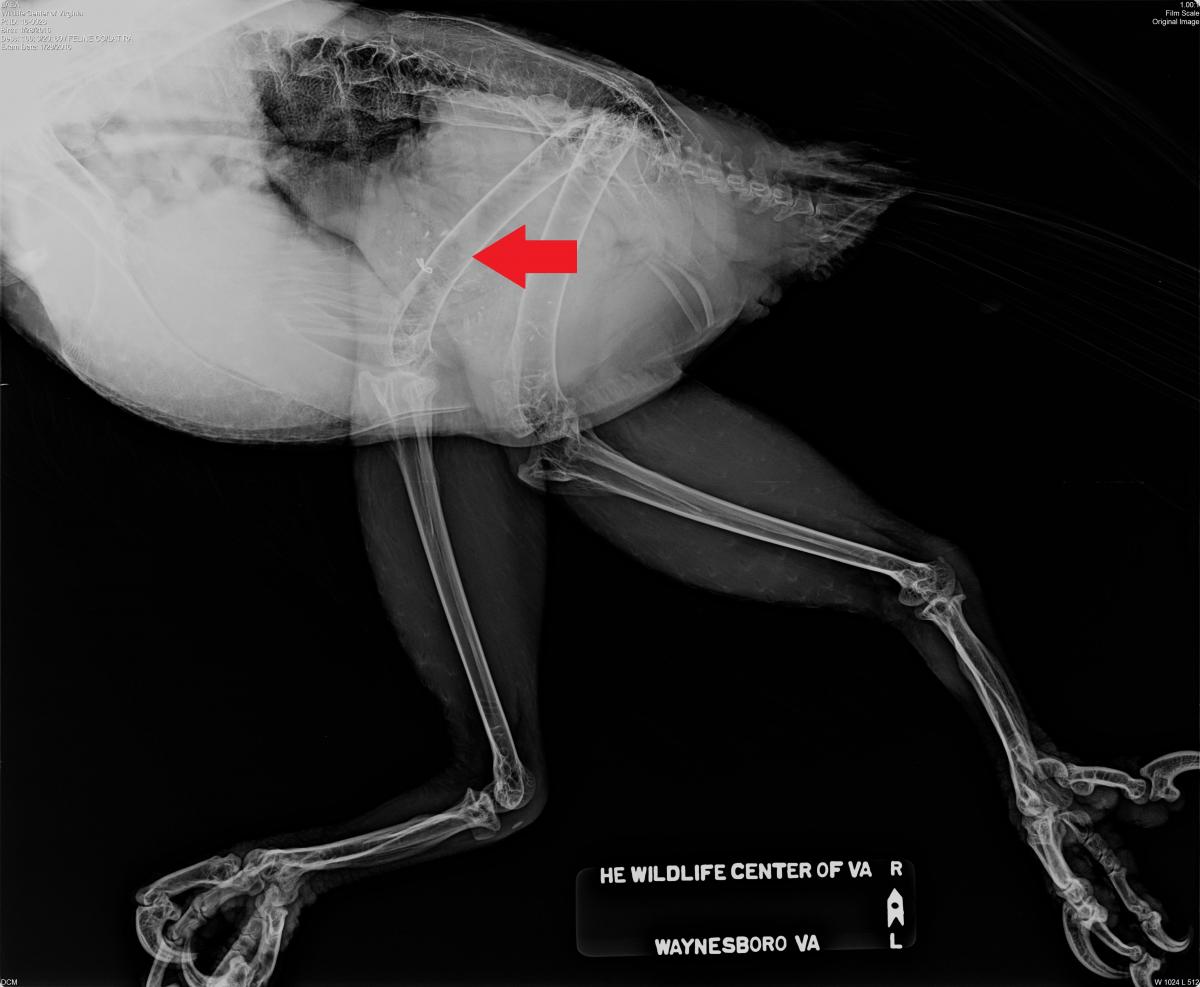 While the eagle was under anesthesia, Dr. Helen plucked the feathers around the bird’s fracture site in preparation for a possible surgery. The injured wing was very swollen and bruised. The wing was bandaged again and the bird was placed in the Center’s holding room for the night.

On January 29, the veterinary team reviewed the eagle’s radiographs and discussed plans for a possible surgical repair of the ulna fractures. While the fractures are fairly well-aligned, the distal portion of the fractured ulna is slightly rotated; without surgery, the eagle’s wrist extension could be affected as the bone heals. Drs. Helen and Dana will take the bird to surgery on January 30.

The staff will monitor the eagle to see if the metallic fragments pass through the bird’s digestive system. The staff may need to use an old falconry technique known as “water-bombing”, where a large, heavily soaked piece of rat skin is fed to the raptor. Because the fur of prey is regurgitated in the form of a pellet, this material will help collect the foreign bodies in the eagle’s ventriculus as the eagle prepares to cast a pellet.

On January 30, Drs. Helen and Dana took Bald Eagle #16-0028 to surgery to repair the bird’s ulna fracture. Dr. Helen was able to place the intramedullary pin through the bird’s fractured bone, though the bruised and swollen wing complicated the fracture repair. In the middle of surgery, the eagle suddenly became very warm and began breathing rapidly, which is unusual for birds on a high level of gas anesthesia. The bird’s heart rate also increased suddenly. The veterinary team quickly took measures to decrease the bird’s body temperature and administered an anti-inflammatory and pain medication. The eagle improved slightly, but several minutes later, went into cardiac arrest. The veterinary team was unable to revive her.