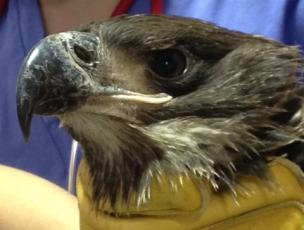 On June 27, a hatch-year Bald Eagle was found on the ground with water-logged feathers in Westmoreland County. The eagle was easily captured and transported to Wild Bunch Wildlife Rehabilitation by wildlife rehabilitator Diana O’Connor. Wild Bunch Wildlife Rehabilitation staff noted that the bird was very thin, but found no other injuries. The eagle was transferred to the Wildlife Center the next day.

During the initial exam, Bald Eagle #15-1348 was dull and lying sternal [chest down]. Dr. Meghan examined the bird and found that the eagle infested with flat flies and lice and also had significant damage to multiple feathers shafts on her tail and each wing. Radiographs and blood work were unremarkable.

The veterinary staff administered fluids and started the eagle on a broad spectrum anti-parasitic medication. The bird was placed in the Center’s holding room and offered a meal of chopped rat.

The next morning, Bald Eagle #15-1348 was bright, alert, and standing, but had not eaten any of her meal. The eagle will be offered a variety of foods to see if she will begin to eat on her own. The veterinary team will monitor the bird for any changes in attitude or condition.

Bald Eagle #15-1348 (GW91) was released on September 21 in front of a crowd of about 50 people. Dr. Dave, the Center’s veterinary director, released the bird. The eagle flew over the trees and attendees, over a long corn field, to a tree where she finally perched. Track the eagle’s whereabouts here! 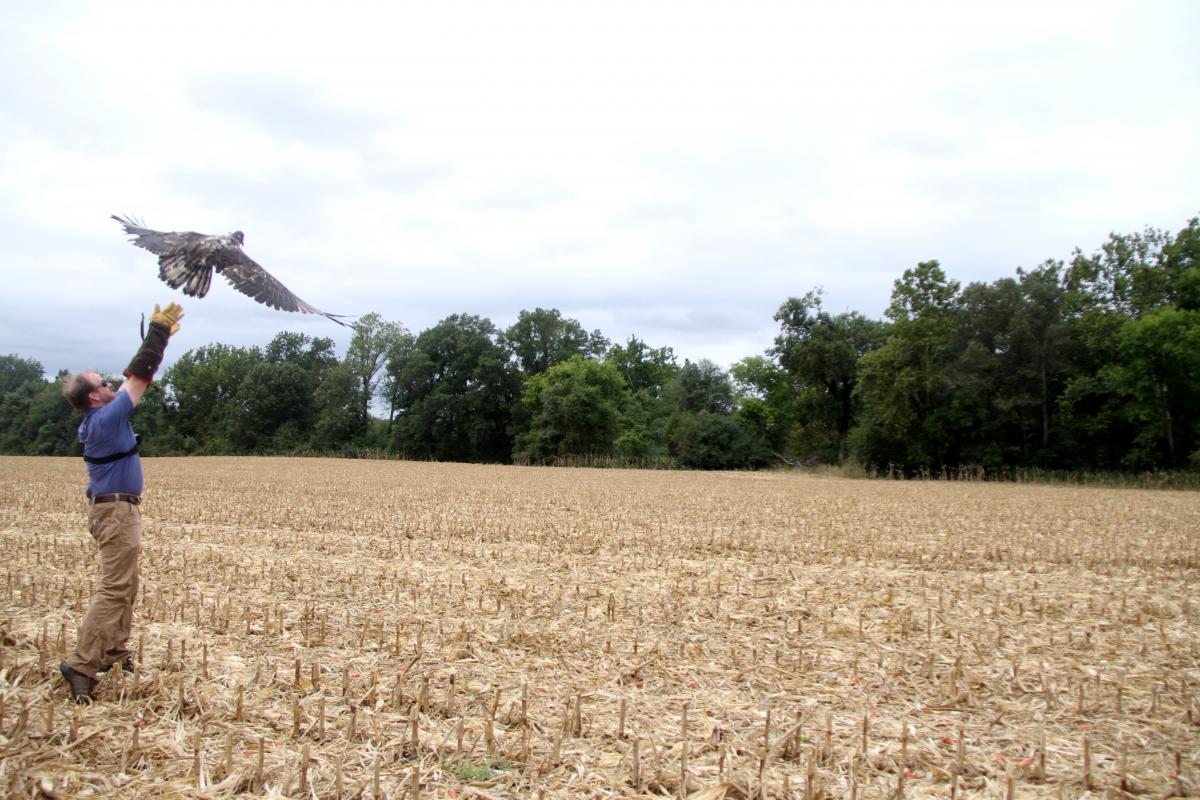 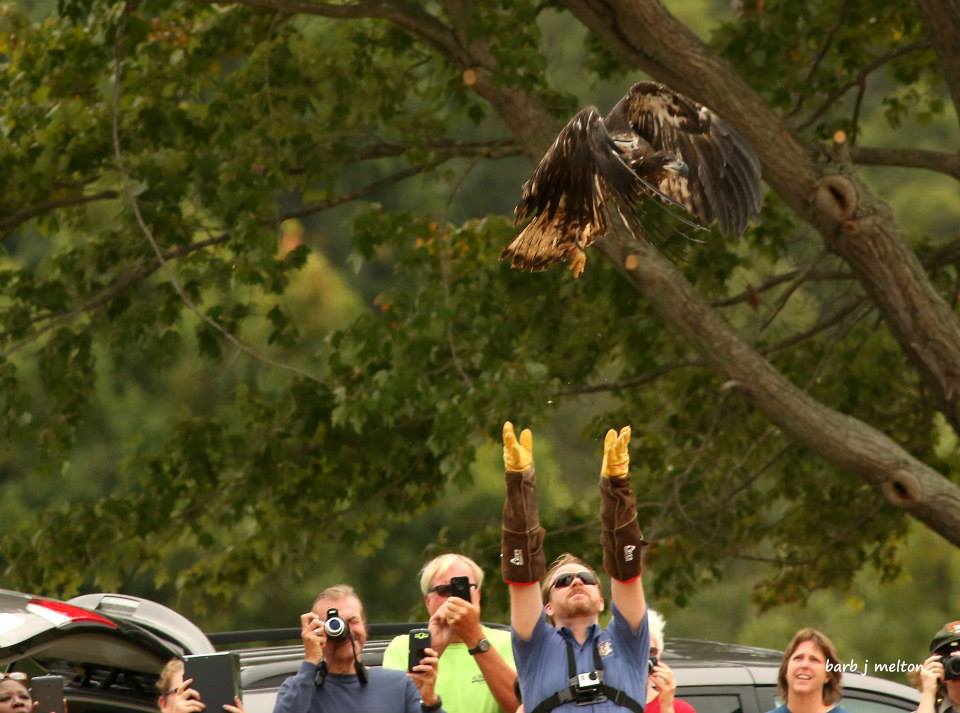 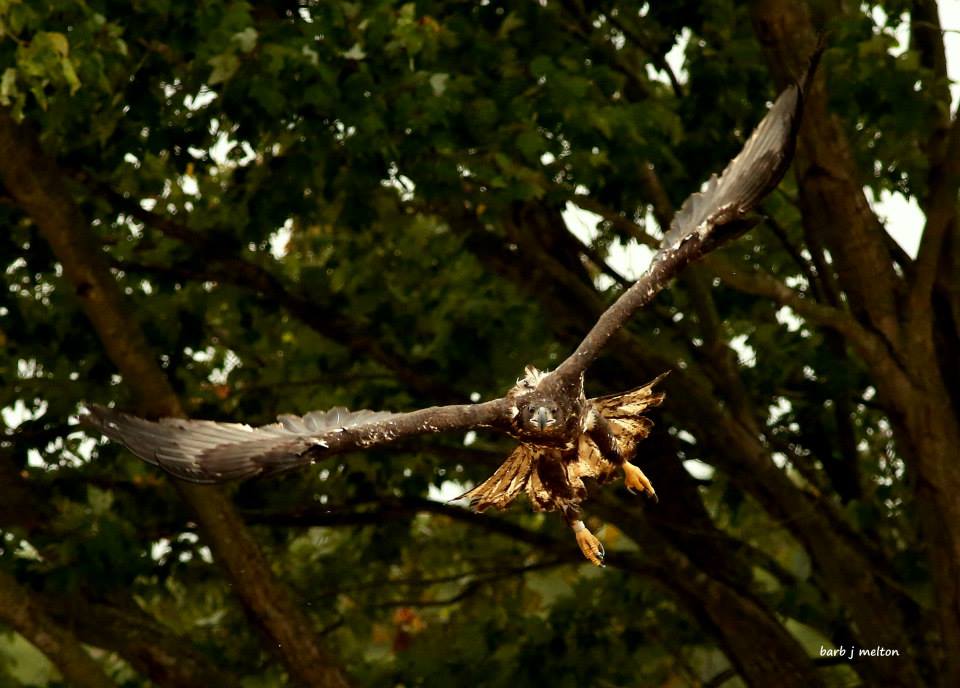 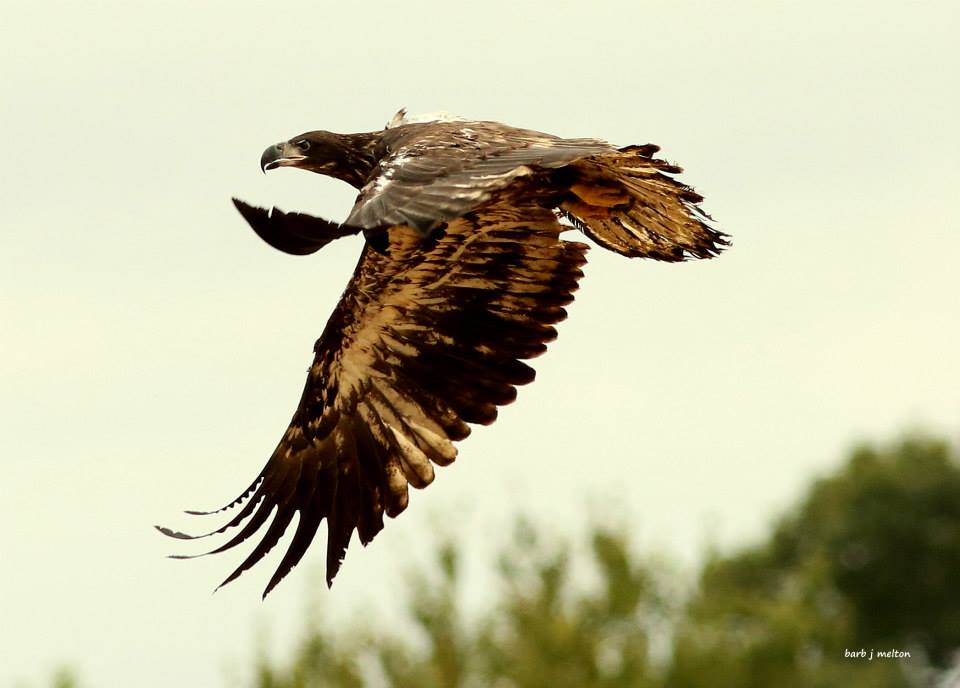 Bald Eagle #15-1348 has been flying very well during the past week. On Wednesday, September 16, the eagle was caught up for a pre-release exam and blood draw. Results were within normal limits, and Dr. Helen declared the eagle ready for release.

The young eagle will be released on Monday, September 21 in Colonial Beach, Westmoreland County, Virginia at 12 noon. The release party will meet at the George Washington Birthplace National Monument [1732 Popes Creek Road, Colonial Beach, VA]. Dr. Dave, the Center’s veterinary director, will release the bird. The release is open to the public; those planning on attending should RSVP to Lacy at lkegley@wildlifecenter.org. Attendees should plan to meet at the Visitor Center. 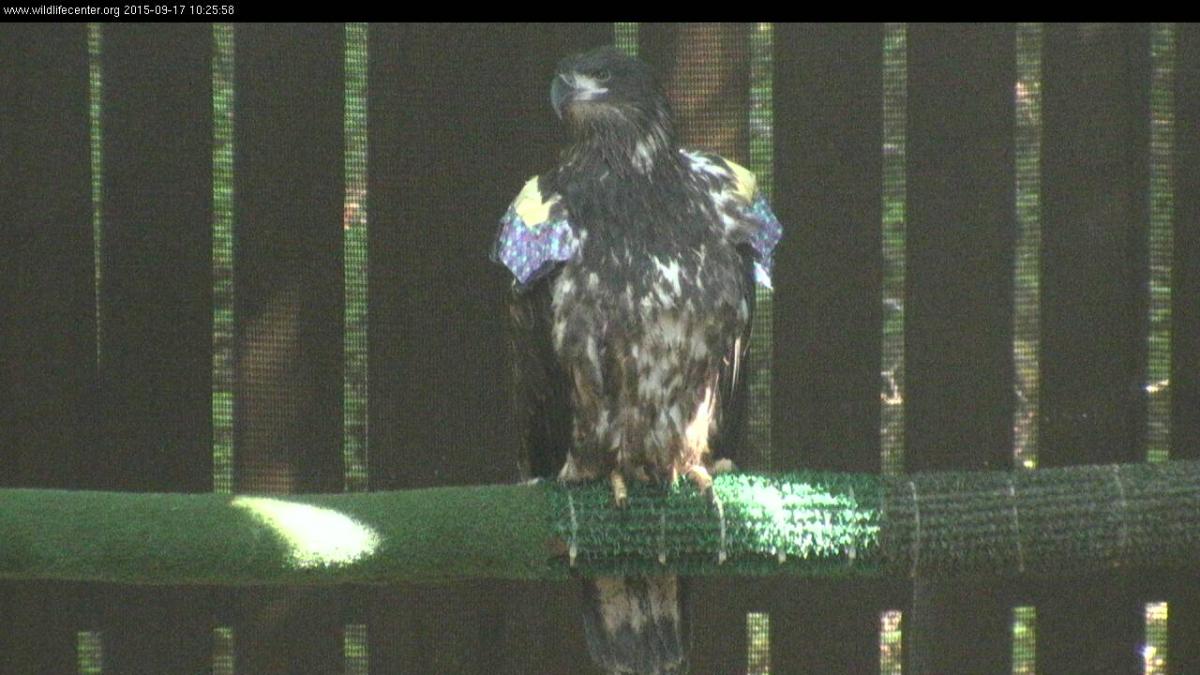 The eagle is wearing a GPS transmitter; after release, updates will be available on the Center's Eagle Tracking page. This bird will be known as GW91.

Bald Eaglet #15-1348 has been exercising well during the past two weeks. The bird has increased her stamina, and generally has good height and form while flying. The bird is currently flying an average of 13-14 passes in the flight pen before tiring, which is nearly at optimum condition. 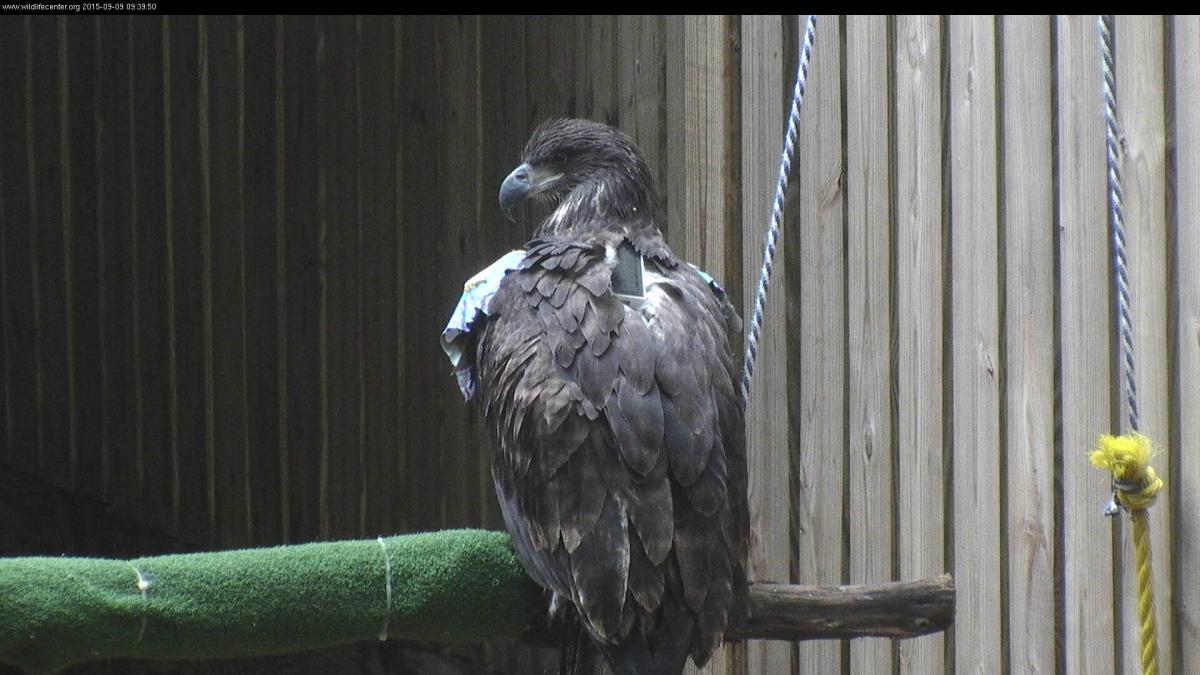 Because this eaglet is flying well and is likely the next bird to be released, the eaglet was fitted with a GPS transmitter by Department of Game and Inland Fisheries eagle biologist Jeff Cooper on September 8. Jeff came to fit Bald Eagle #15-1667 with a GPS transmitter prior to her release. Because this eaglet is a young bird, Jeff and the Center staff would prefer to have the unit on this bird for at least a week prior to release.

Exercise will continue during the next week. Continued improvement in the bird's flight capabilities will be needed before the eagle is cleared for release. No determination has been made of the time and place for a release.

Bald Eagle #15-1348 has continued with daily exercise sessions in A2. While the bird is able to fly more than 10 passes in the flight pen, the bird frequently flies low to the ground after it begins to tire. The eaglet will need to gain more stamina and height during flight conditioning sessions before it can be considered for release.

Bald Eagles #15-1667 and #15-1348 continue to do well in flight pen A2. Both birds are eating well and are consistently making 10 passes perch-to-perch. While the two eagles’ flying abilities are improving, each bird still needs to improve in endurance and perching before they can be considered ready for release. The rehabilitation staff will continue to exercise the eagles in the upcoming weeks.

The staff have been able to observe Bald Eagle #15-1667 during the past few days via Critter Cam; the eagle remained still unable to fly well through Saturday, August 1. The staff noted an intermittent right wing droop via the webcams, and also observed the eagle being a little unstable after hopping off of the A-frame, though the bird recovered her balance well.

On Sunday, August 2, the staff noted some improvement in eagle 15-1667's flight capabilities; the bird was able to fly from an A-frame perch to a higher swinging perch. On August 3, the rehabilitation staff exercised eaglet #15-1348 and reported that adult eagle #15-1667 was able to keep pace -- she flew the length of the flight pen a total of 10 times!  The staff will continue to exercise and monitor the eagle during the next week. 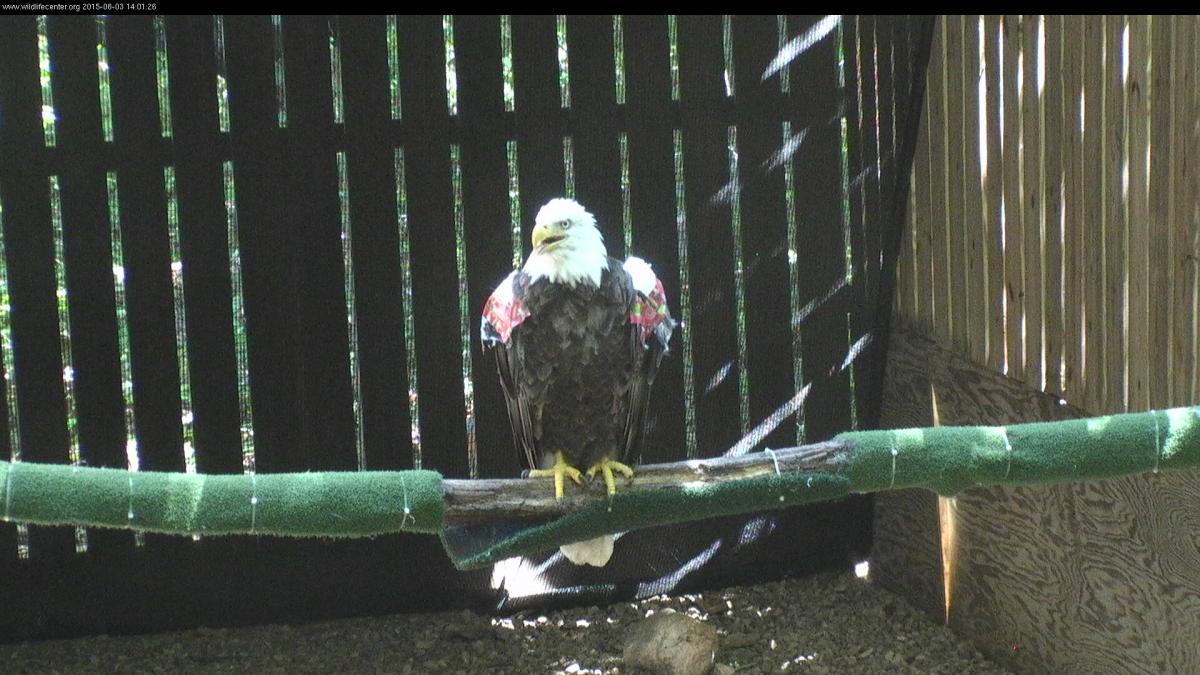 On July 15, the staff will begin to exercise Bald Eaglet #15-1250 to prepare the bird for release later this summer.

For a couple of days following admission, Bald Eaglet #15-1348 remained quiet and dull. The veterinary team continued to provide fluids to the bird and hand-fed the eaglet to ensure it was receiving enough nutrition. On June 30, the bird was moved to a small outdoor enclosure, to see if the move would stimulate its appetite. The bird began eating on its own and appeared to be brighter.

After the staff were sure that the eaglet was consistently eating, the young eagle was moved to flight pen A2, to share an enclosure with eaglet #15-1250 and Bald Eagle #15-0355. The eaglet has gained nearly a kilogram since its admission and currently weighs 3.70 kg. 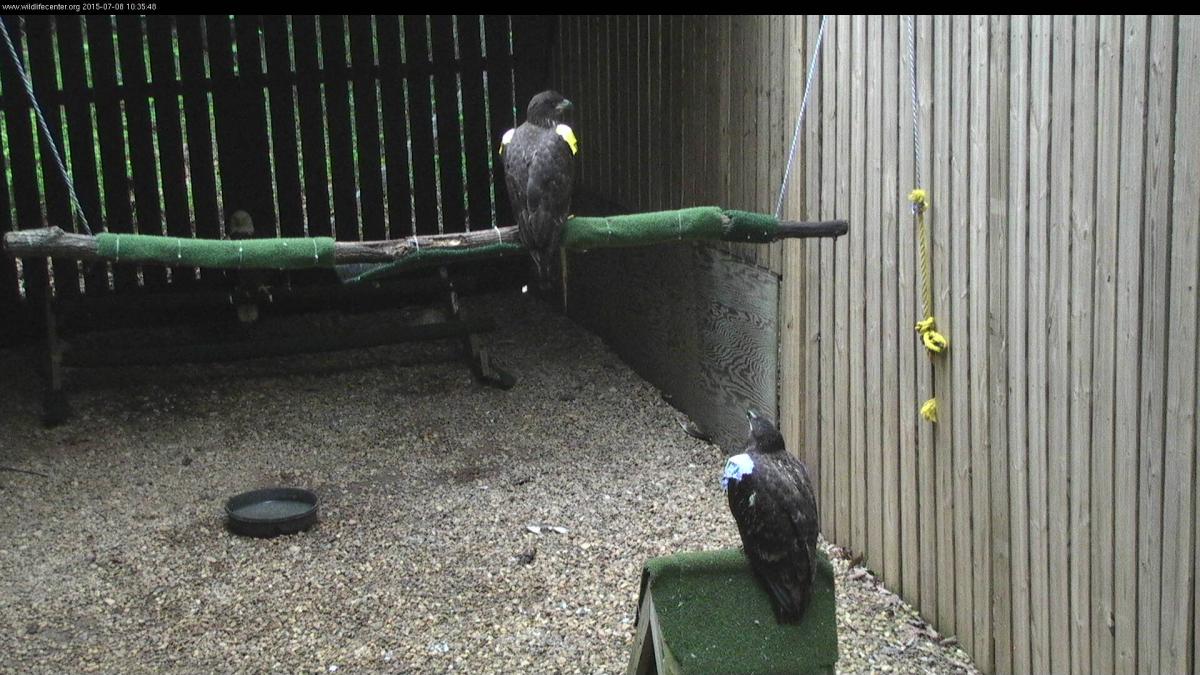