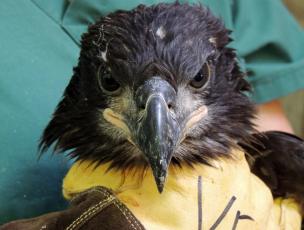 On June 18, a young Bald Eagle was found down on the ground at Westlake Country Club at Smith Mountain Lake, Virginia. Dr. Diane D’Orazio from the Southwest Virginia Wildlife Center went to the country club to retrieve the eagle; the bird was on a cliff overlooking a creek on the golf course. Dr. Diane was able to capture the young bird and transported it back to the Southwest Virginia Wildlife Center in Roanoke.

The eagle was quiet and thin and had maggots present on the shafts of the feathers on its tail and right wing. Dr. Diane and rehabilitator Sabrina treated the bird, removed the maggots, and began tube-feeding the young eagle. The following morning, the young eagle was brighter and standing. The eagle was transported to the Wildlife Center of Virginia on June 21.

Dr. Meghan noted that the eagle was bright and alert, and well hydrated when it arrived at the Center. No external parasites were noted. The physical examination and blood work were within normal limits. The bird became stressed with prolonged handling, and the team decided to move the young eagle outside. The young eagle, which is suspected to be female, was placed in a large airline crate in one of the Center’s C-pens, along with Bald Eaglet #15-0733. 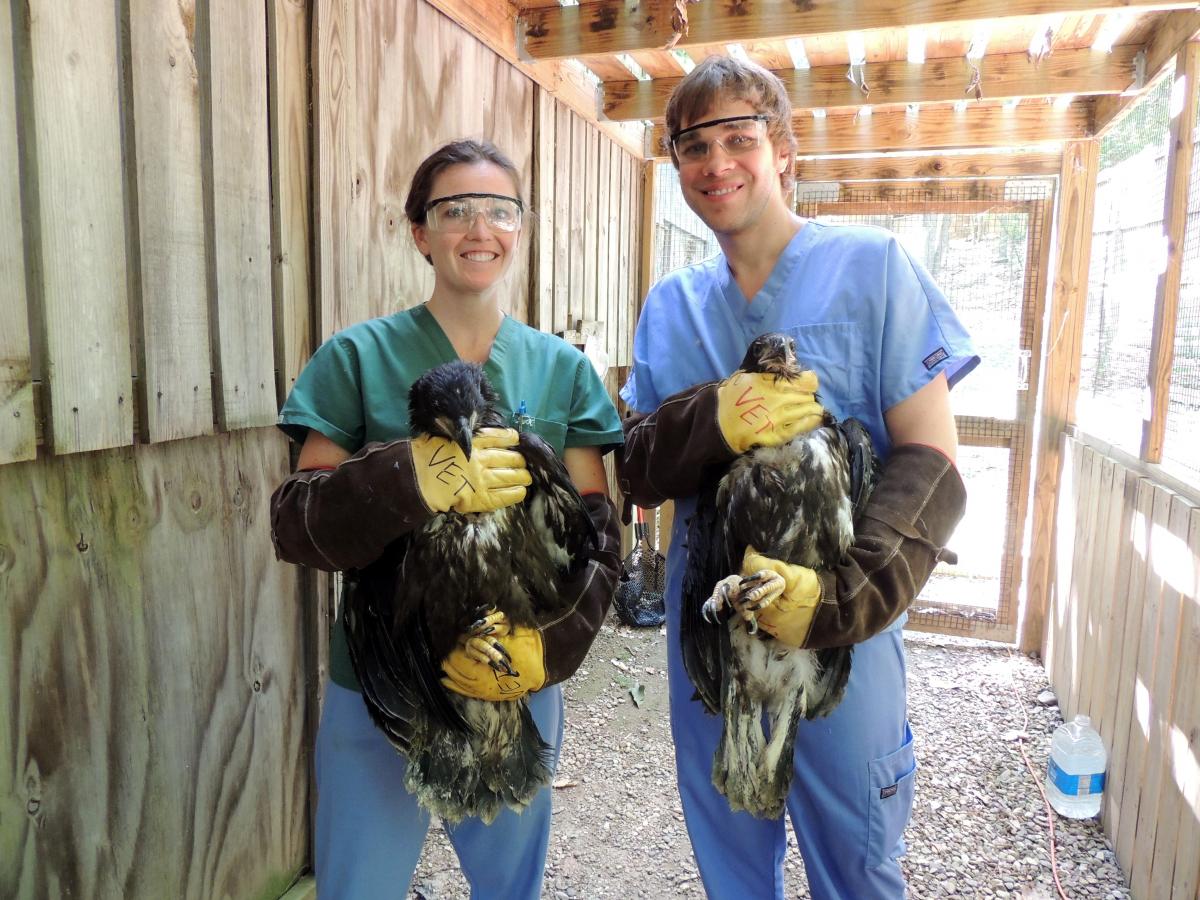 The two eagles will spend a couple of days getting to know one another while #15-1261 remains in a crate; the two birds will then be allowed to interact and will likely move to a larger outdoor flight pen.

Your special donation will help the Center to provide care to this young Bald Eagle ... and to the 2,500 sick, injured, and orphaned wild animals the Center will treat this year.

Bald Eagle #15-1261 was successfully released at Smith Mountain Lake State Park on October 16. Wildlife Center President Ed Clark transported the eagle to the release and discussed the eagle’s story and rehabilitation. Southwest Virginia Wildlife Center President Sabrina Garvin had the honor of releasing the Bald Eagle back to the wild, in front of a crowd of about 60 people.

Ed reports that the eagle flew low to the ground away from Sabrina, before gaining altitude and continuing to fly up and over the trees and out of sight.

The eagle will now be known as SML52 on our Eagle Tracking page. Tune in next week when we post updates on this young bird's travels!

Eagle Release in the News:

Bald Eagle #15-1261 has been flying very well during the past week. On October 6, Dr. Helen drew blood from the bird for a pre-release blood work analysis. Results were within normal limits, and the bird was cleared for release.

The juvenile Bald Eagle will be released at Smith Mountain Lake State Park [1235 State Park Road, Huddleston, VA 24104] on Friday, October 16 at 11:00 a.m. President Ed Clark of the Wildlife Center of Virginia and Sabrina Garvin, founder and director of Southwest Virginia Wildlife Center, will be present at the release, which is free and open to the public. Those who wish to attend should plan on meeting at the Visitor’s Center; please RSVP to lkegley@wildlifecenter.org. 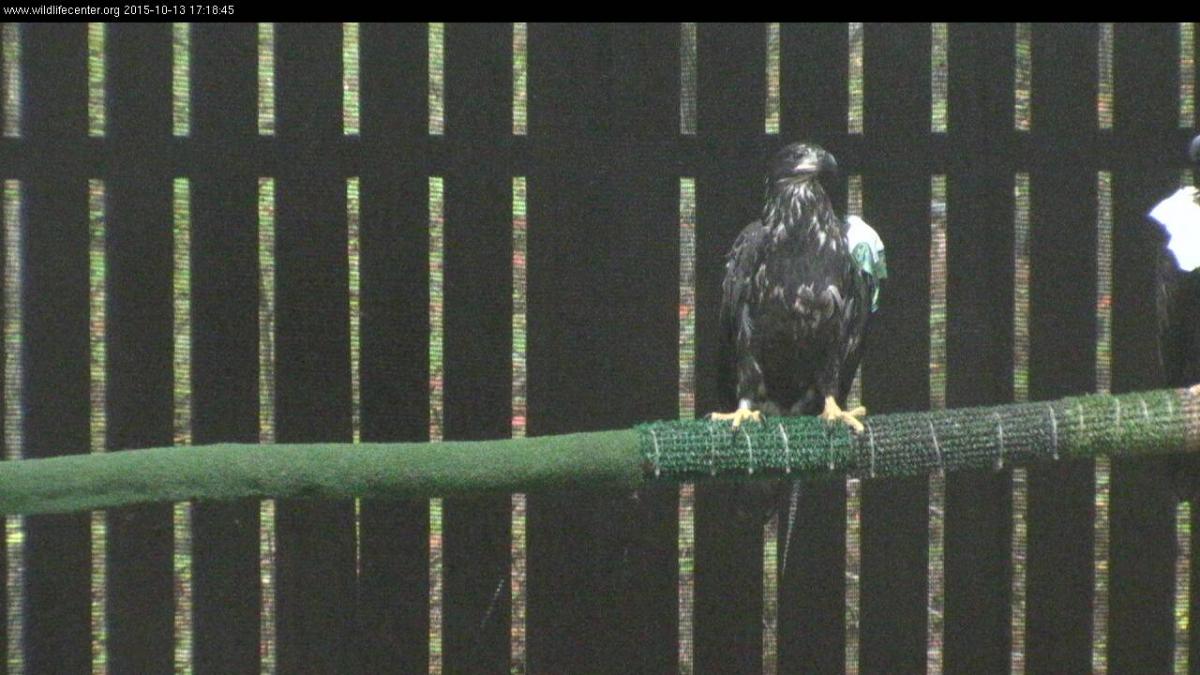 On Tuesday, October 6, Department of Game and Inland Fisheries eagle biologist Jeff Cooper will come to the Center to fit the three young eagles with GPS transmitters. The eagles will be a part of an ongoing research study that will monitor eagle movements. This study looks at the data received from these tracked Bald Eagles to determine the range and behavior of Bald Eagles in Virginia’s coastal plain. Migratory behavior is studied as biologists are able to see how far Bald Eagles move in the winter season, and the data will play an important role in modeling how these birds use airspace. By looking at heights at which the eagles fly, average distances, and other specifics, biologists are able to relate this eagle behavior to real-life issues, such as airstrike data. During the past few years, VDGIF Biologist Jeff Cooper has fitted dozens of Bald Eagles with GPS transmitters.

After the transmitter fitting, the birds will continue to be exercised for at least a week before release is considered.

On September 11, Bald Eagle #15-1261 was moved from the A3 enclosure and joined Bald Eagle #15-1922 in A2. The bird will continue with daily exercise and has been flying with good height, maneuverability, and perching. If the eagle is able to fly at optimal level [15 passes end-to-end], the rehabilitation staff will consider preparing Bale Eagle #15-1261 for release.

Bald Eaglet #15-0733 still has not been seen flying much. Repeat radiographs performed on September 7 were largely unremarkable and shows that the fracture site continues to heal. The staff noticed that the bird had many broken tail and wing feathers and decided to move Bald Eaglet #15-0733 to the A3 tower to prevent further damage to the feathers.

On September 9, the veterinary staff did more “eagle shuffling”. Moving Bald Eaglet #15-0733 to the A3 tower, freed up space in the larger portion of the enclosure; the staff decided to shift Bald Eagle #15-1261 to A3 to give its cage-mate, Bald Eagle #15-1348, more room to exercise in preparation for release.

Staff will continue exercising Bald Eagle #15-1261 in the coming weeks, along with its enclosure-mates, Bald Eaglets #15-1312 and #15-1339. Currently all three birds are making seven to ten passes end-to-end.

The four young Bald Eagles in flight pen A3 have been doing well during the past month. Three of the young eaglets -- #15-1261, #15-1312, and #15- 1339 -- have gradually started flying. At first, they made short flights to the swinging perches, but soon the short flights were replaced by longer flights up to the tower and flights from end-to-end in the flight pen. All birds are eating well and are maintaining weight.

Bald Eaglet #15-0733 has not been seen flying much – the bird tends to remain on the A-frames and ground perches in the flight pen. This young eaglet had a severely fractured wing when he was admitted in May; while the eaglet may need additional time for flight conditioning, it’s also possible that he will not be able to fly well enough for release.

Within the next day, Bald Eaglet #15-1261 will be moved to flight pen A2, and will share space with eaglet #15-1348. By splitting eagles into smaller groups, the rehabilitation staff will be able to safely exercise the birds to prepare them for release. 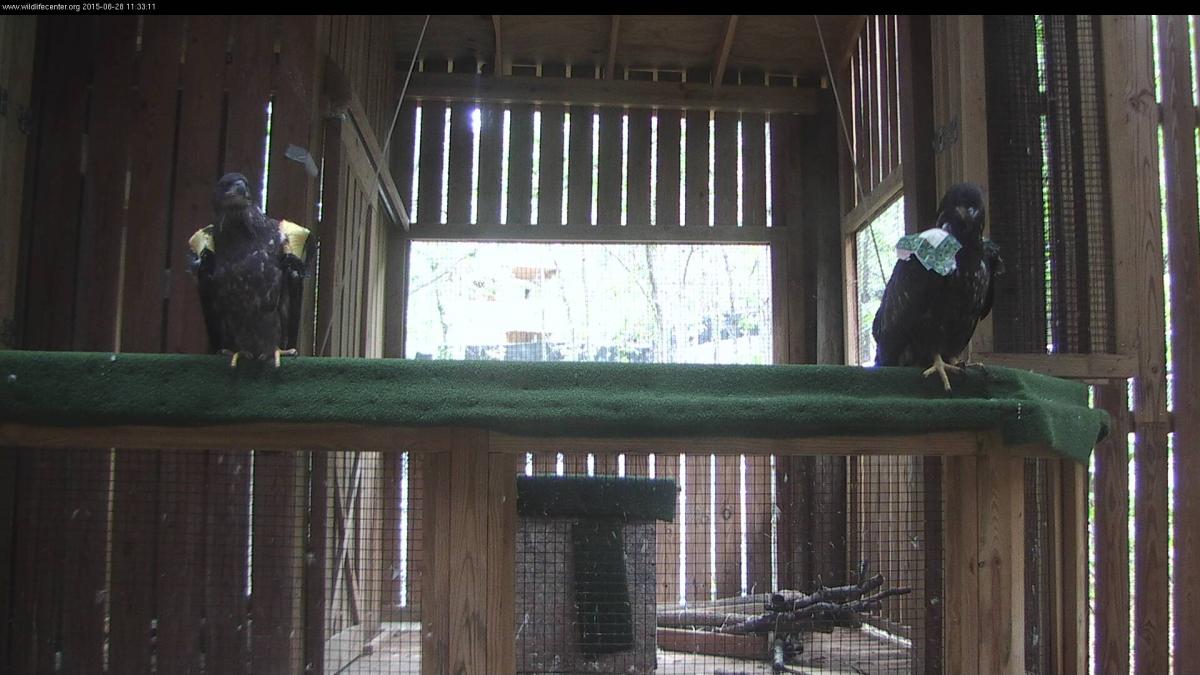 For identification purposes, most of the eaglets’ protective wing “bumpers” have remained the same:

This recent move means that four eaglets are now being housed together. They can be identified on Critter Cam by their colorful, protective “wrist” bumpers:

All of the birds are eating well and are in good body condition.

Bald Eaglets #15-0733 and #15-1261 were introduced to one another last week; the two young birds appear to be getting along well. Both are eating and gaining weight.

On Friday, June 26, Bald Eaglet #15-0733 was brought into the Center’s hospital and anesthetized for follow-up radiographs. Dr. Helen and Dr. Meghan were pleased to see a significant improvement of the bird’s healing wing fracture. The eaglet is also doing very well with physical therapy – there is a notable improvement in the bird’s range of motion after each physical therapy session. The team is currently measuring the degrees of wing extension with the new goniometer, and hope to see continued improvements in the coming weeks.

Also on June 26, Bald Eaglet #15-1261 had a complete blood count performed, which revealed a high white blood cell count. This could indicate an underlying infection, so the eagle began a course of antibiotics. After both birds were done with their diagnostics, they were moved to the A3 tower – a 12' x 14’ loft area that overlooks the main flight portion of the A3 flight pen.

Tune in to the Wildlife Center’s Critter Cams – Eagle Cam will be streamed occasionally throughout the week. #15-0733 is wearing “baby duck bumpers” – protective “wrist” guards with a pattern of baby ducks. Bald Eagle #15-1261 is bumperless. 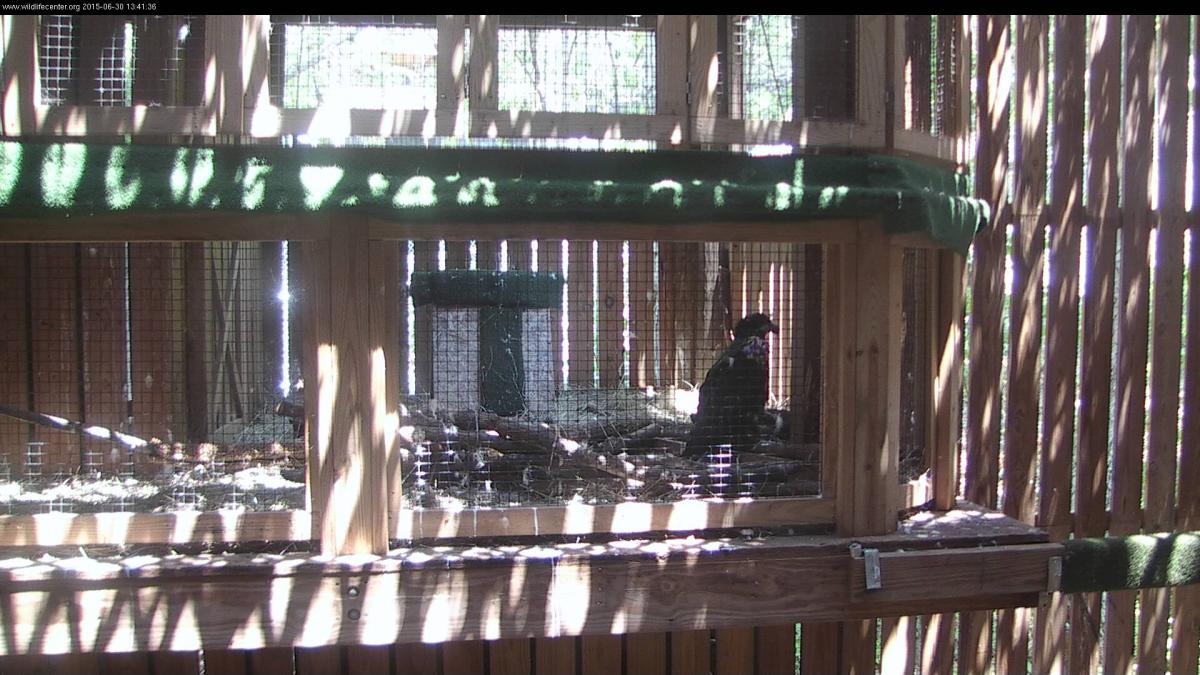 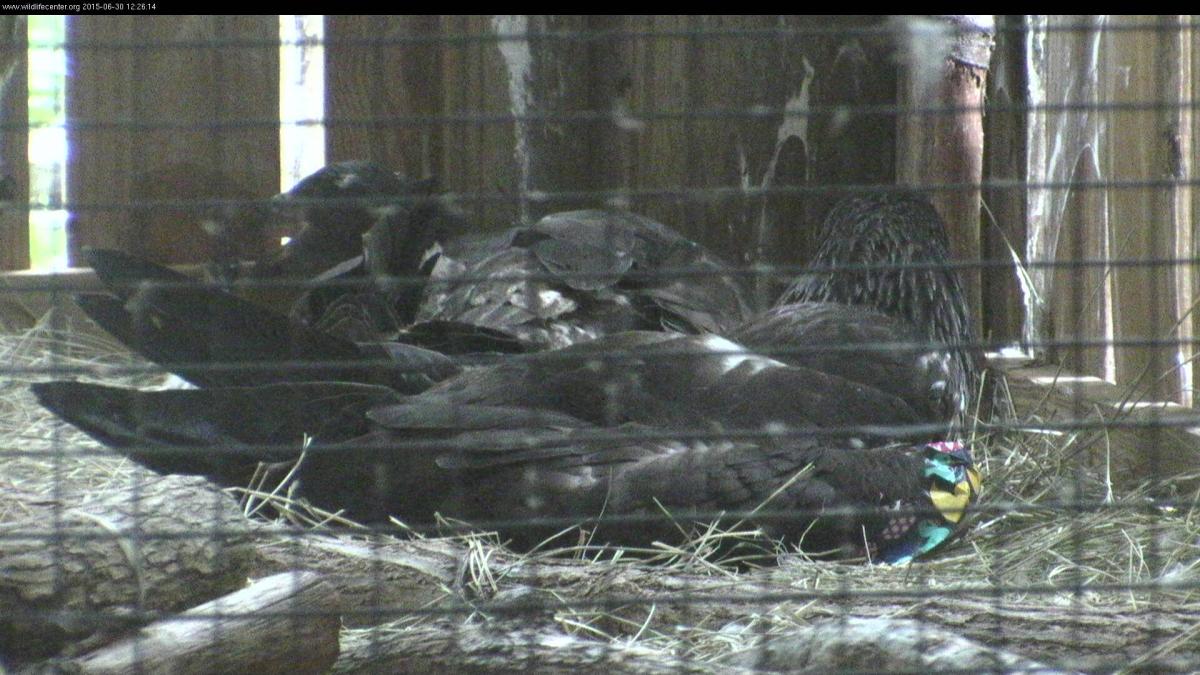