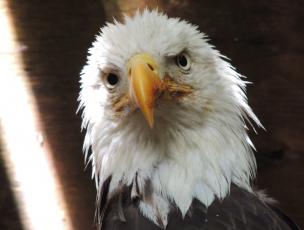 On May 10, a mature female Bald Eagle was found down on the ground in Stafford County, near Widewater State Park. The bird was unable to fly, and an animal control officer responded to the scene. The officer attempted to catch the bird, which flapped a short distance into nearby water. The animal control officer waded into the water after the bird and was able to catch her. A Virginia Department of Game and Inland Fisheries officer transported the eagle to the Wildlife Center.

Dr. Meghan Feeney, the Center’s veterinary intern, examined the bird when she arrived. The eagle was bright, alert, feisty, and had no obvious injuries. On physical exam, Dr. Meghan found that the eagle had a broken talon and several superficial foot lacerations, but no other injuries were noted. Blood work was within normal limits, and no fractures were noted on radiographs. Dr. Meghan placed the bird in the Center’s holding room for the night after giving her fluids.

On Monday, May 11, the Bald Eagle was test-flown in one of the Center’s large flight pens. The eagle was not able to gain height during flight, and remained only a couple of feet off of the ground. The eagle was placed in the Center’s holding room again. Dr. Meghan, Dr. Helen, and Dr. Dave all examined the eagle's radiographs again, but no injury was noted.

The eagle will be cage-rested for the next week and the team will check for signs of a wing droop.

Your special donation will help the Center to provide care to this Bald Eagle …and to the 2,600 sick, injured, and orphaned wild animals the Center will treat this year.

On August 26, Bald Eagle #15-0642 was successfully released back to the wild at Widewater State Park. A crowd of about 100 people attended the release, including the homeowners who initially reported the injured eagle, and the animal control officer who rescued the bird.

As the Bald Eagle was released, she flew off across a field, and then over a tree line about 250 feet away. We are currently waiting for the bird's GPS transmitter data to be added to our tracking account; once we have access, we'll post tracking updates on our Eagle Tracking page.

Successful Eagle Release! Ed Clark of the Wildlife Center of Virginia releases this mature female bald eagle back to the wild near the spot where it was found three months ago. Yesterday, biologists from VDGIF put a GPS transmitter on the bird and you will be able to follow it's movements here: http://wildlifecenter.org/critter-corner/success-stories

Posted by Virginia Department of Game and Inland Fisheries on Wednesday, August 26, 2015

Here are some photos from the Bald Eagle (#15-0642) release I attended this morning. Simply amazing. Thanks to ACO...

Eagle release in the news:

Eagles scheduled for release this week, The News Leader

Bald Eagle #15-0642 was caught up and brought into the Center’s clinic today so that Dr. Dave could band the bird prior to release. Department of Game and Inland Fisheries eagle biologist Jeff Cooper also came today to fit the Bald Eagle with a GPS transmitter. 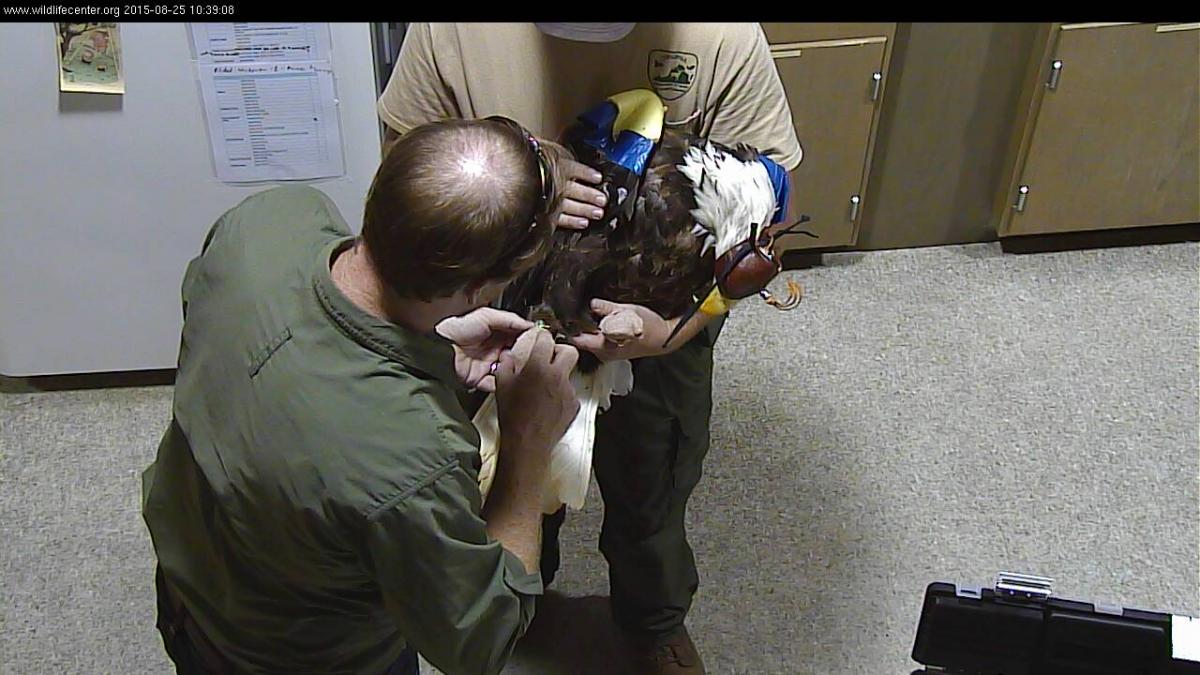 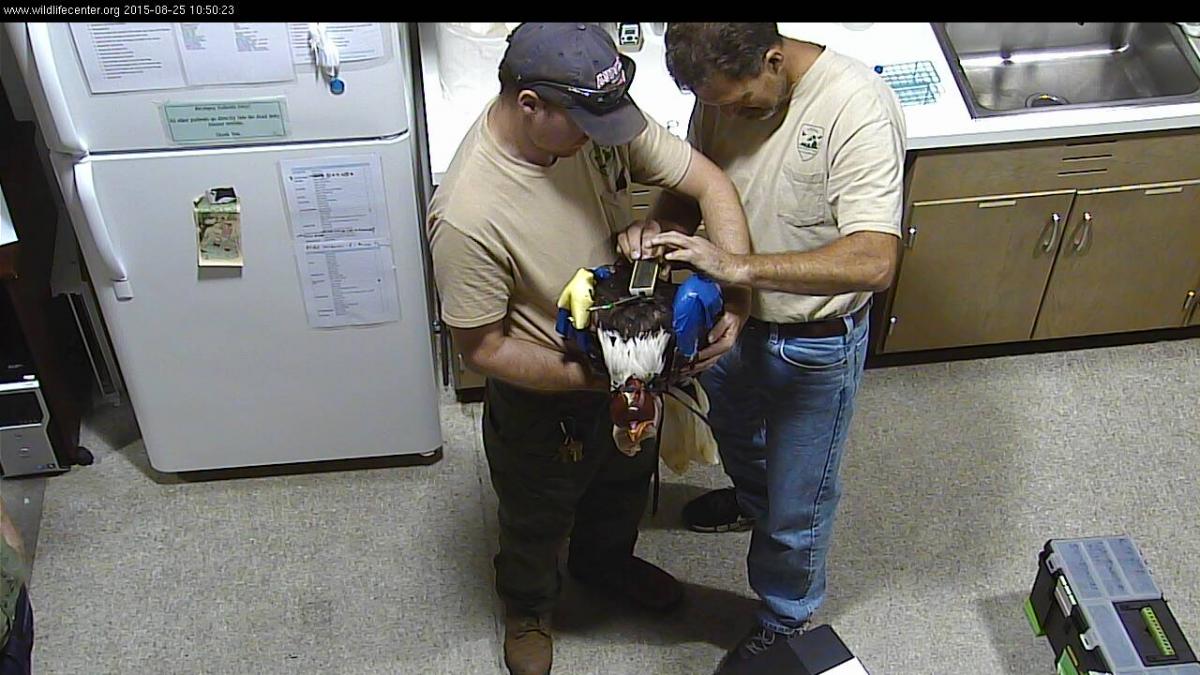 Because the bird is being released, and will no longer be a patient at the Wildlife Center’s hospital, the bird will be referred to in tracking updates as W20. “W” represents Widewater, where the bird was rescued and will be released. The numbers are the last two digits on the transmitter. Each transmitter has a five-digit number written on the side of it in permanent black marker so that the eagle can be identified at a distance. 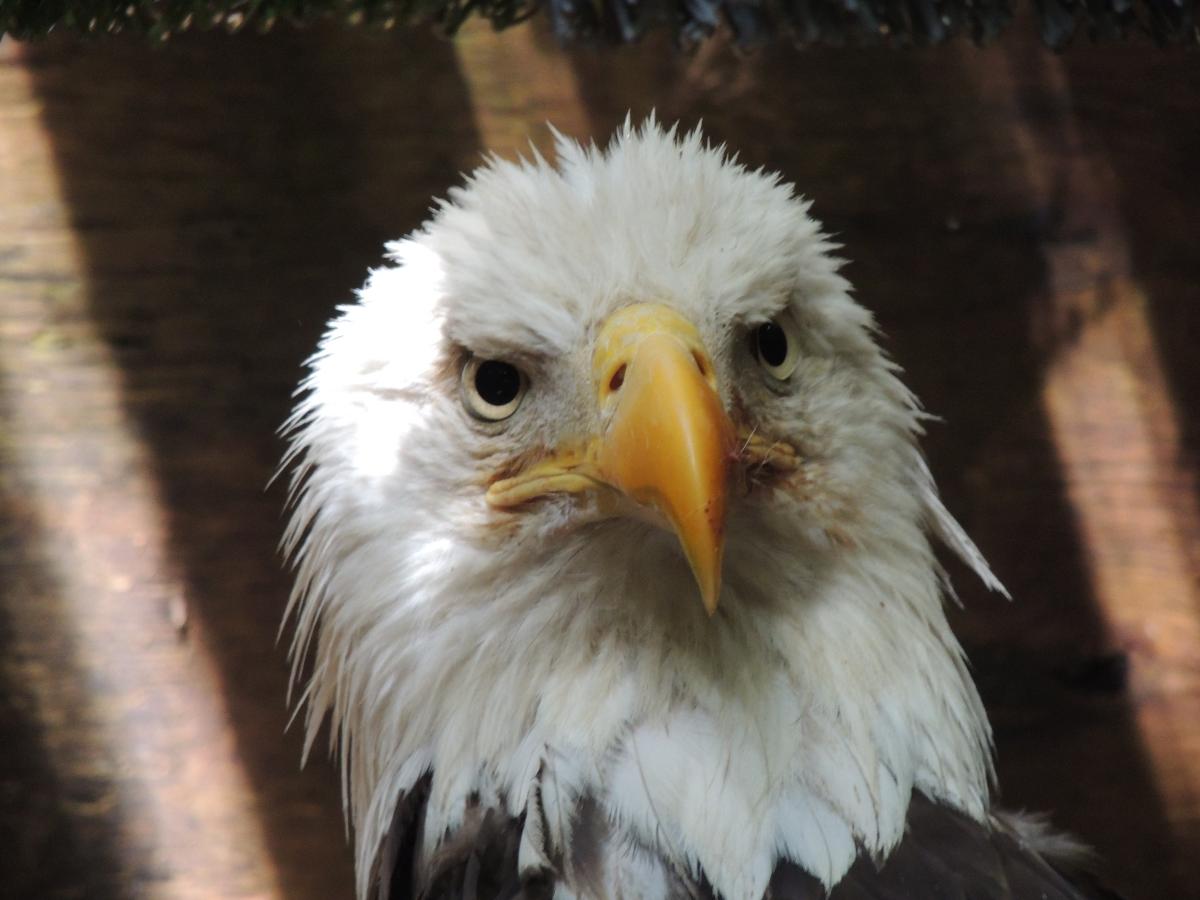 Bald Eagle #15-0642 has been very flying well during the past week. On August 20, the veterinary team caught the eagle for pre-release blood work and an examination. Dr. Dana declared the eagle to be in good condition, and blood work results were all within normal limits. The eagle is ready for release!

Wildlife Center President Ed Clark will release Bald Eagle #15-0642 at Widewater State Park on Wednesday, August 26 at 11:30 a.m. The release will be open to the public; those planning on attending should RSVP to lkegley@wildlifecenter.org. As we will have two Bald Eagle releases next week, please indicate which release you plan on attending!

Widewater Park is in its initial development. Please note that there will be no restroom facilities at the release site.

The release will take place off of Brent Point Road. The approximate location of the gated entrance to the field can be found here. Please use these directions to get to the release site:

Directions:
On I-95 S from DC toward Richmond, take exit 150A for Joplin Rd.
Turn right at the light onto Rt 1 southbound.
After about 4 miles, turn left (at a stoplight) onto Telegraph Rd.

Directions for anyone coming from Richmond are:
On I-95 N from Richmond toward DC, take exit 143A for Aquia Harbor.
Turn left at the light onto Rt 1 northbound.
After about 4 miles, turn right (at a stoplight) onto Telegraph Rd.

Upon turning onto Telegraph Rd:
After half a mile, turn left onto Widewater Rd.
After about 4 miles, Widewater Rd makes a sharp right and turns into Arkendale Rd.
After 2 miles, turn left to cross over the railroad tracks and onto Brent Point Rd.
Continue on Brent Point Rd for about 2.5 miles.
Immediately after passing a pond on the right is a turnoff with a metal gate, which will be open for the event.
Follow the park road (dirt/gravel surface) to the parking area.

Both Bald Eagles currently housed in flight pen A1 [juvenile eagle #15-1250 and mature eagle #15-0642] are flying well. As of August 12, eagle #15-1250 is flying an average of 17 passes perch-to-perch during daily exercise sessions; the rehabilitation team reports that the bird has great height and form while flying, and the young bird’s stamina has also improved.

Bald Eagle #15-0642 has also improved greatly during the past few weeks. The adult eagle is able to fly an average of 15 passes during each exercise session, and is able to maintain good height while in flight.

If both eagles continue to fly at this level for the next week, the veterinary team will begin to consider each bird’s release. 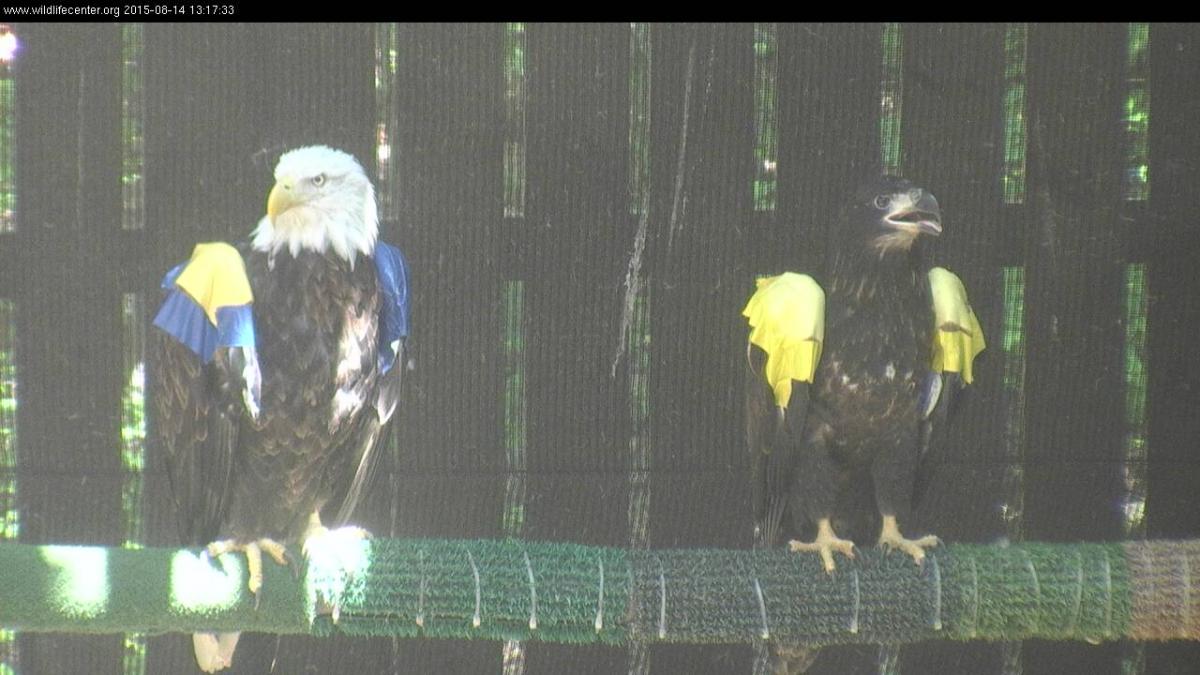 Bald Eagle #15-0642’s carpal [wrist] injuries continued to heal in late June. By the end of the month, the bird was ready to move back into flight pen A1. At first, the staff gave the bird time to get used to the enclosure again while doing a little “self-exercise”. On July 22, the rehabilitation staff began to formally exercise the eagle. So far, exercise is going well; the bird can make strong flights from perch to perch. Rehabilitator Leighann notes that the eagle needs more stamina at this point and is able to make about eight passes during each exercise session.

Once the eagle’s stamina improves, the staff will assess the bird for release. In the meantime, on July 30, the eagle received a roommate – Bald Eagle #15-1667. Eagle #15-0642 is wearing blue bumpers. 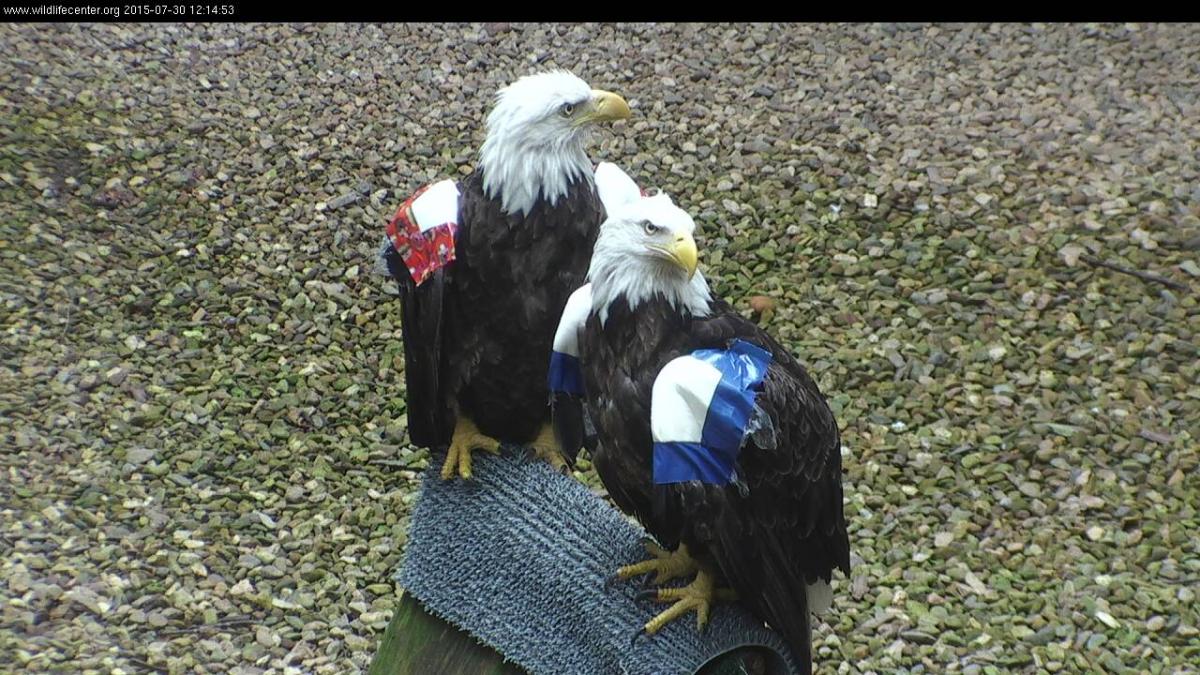 Staff continued to exercise Bald Eagle #15-0642 daily during early June. The bird appeared to be gaining stamina and strength, but on June 15, the veterinary staff noticed an open wound on the eagle’s left carpus [wrist] during a feet and feather check. The wound was cleaned and the veterinary staff replaced the bird’s carpal bumpers. 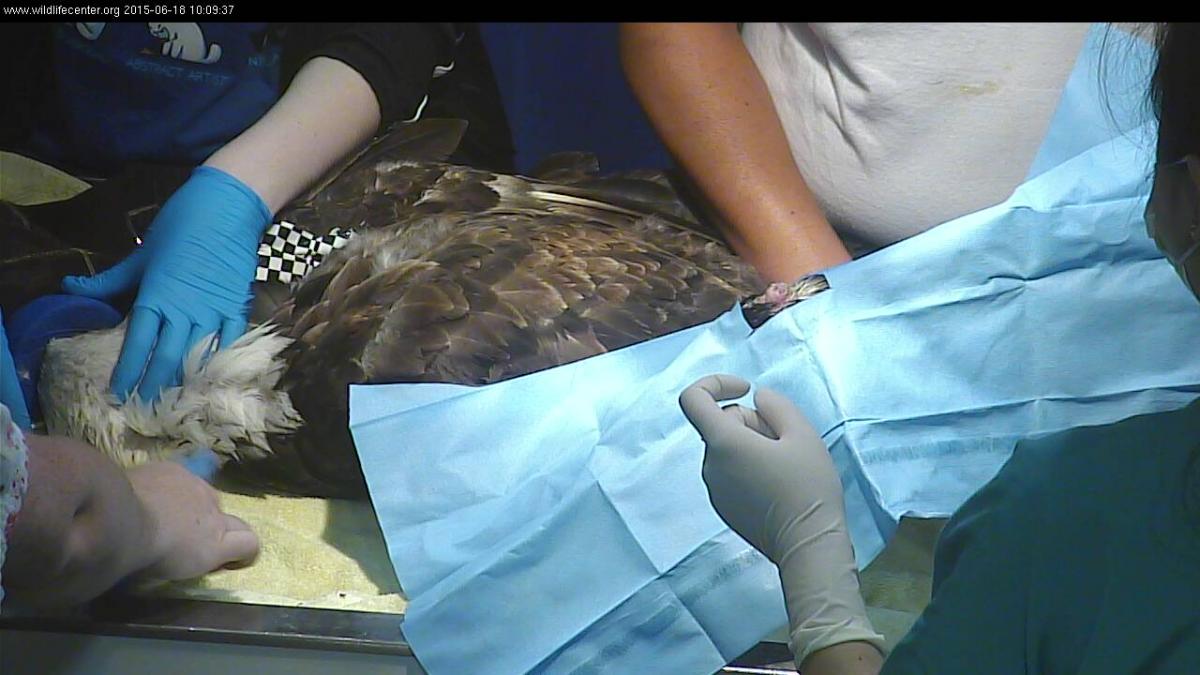 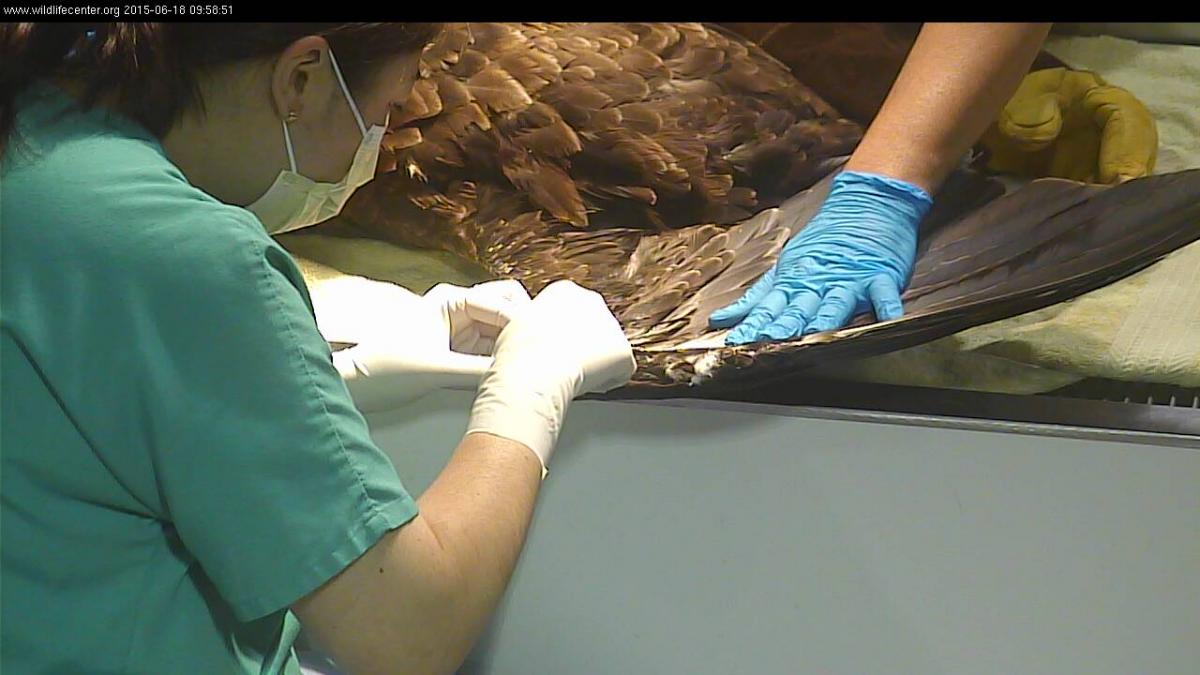 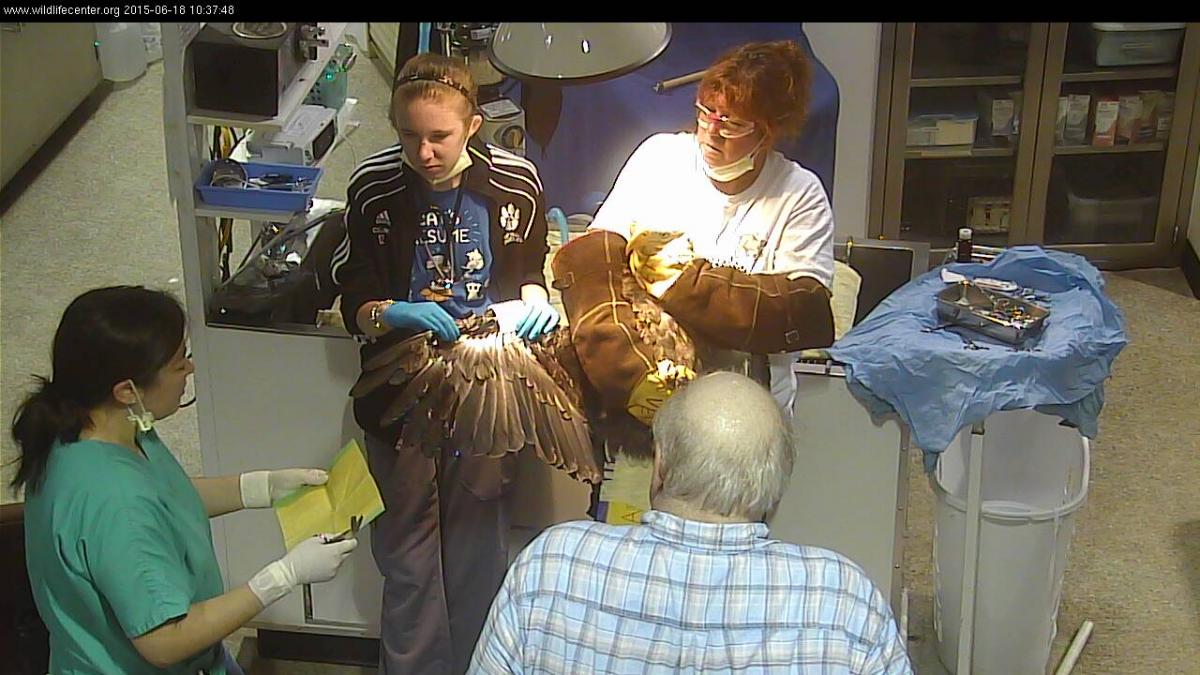 The following morning, the eagle was bright, alert, and feisty. The veterinary examined the surgical site and noted that the wound had slightly reopened, but the sutures were intact. The carpal bumpers were reapplied, and the bird was returned to its large airline crate in the Center’s holding room.

On June 21, Dr. Meghan found that the surgery site was open. Staff had noted that the bird was moving around its crate during the past few days and it is likely due do the location of the lesion and the bird’s increased activity that the sutures became loose. The bird was anesthetized and Dr. Meghan replaced one of the sutures. She then placed antibiotic ointment on the wound before replacing the bird’s bumpers.

On June 22, the staff noticed that while the wound had no swelling or discharge, the carpal wound had reopened. The staff decided to move the bird to a C-pen [C2] to prevent further injury. The bumper pads were replaced before the bird was moved to the outdoor enclosure. The veterinary staff will continue to monitor Bald Eagle #15-0642 and will administer antibiotics for the next three days.

During the past ten days, the rehabilitation staff has been exercising Bald Eagle #15-0642. The eagle has poor stamina, and although the bird can fly to the perches, she often flies low during end-to-end passes in the enclosure and misses perches when landing.

Eagle #15-0642 is now alone in flight pen A1, and staff will continue to exercise the bird daily.

The staff has monitored Bald Eagle #15-0642 (wearing checkered duct tape bumpers) in the large outdoor enclosure during the past two weeks. The eagle has been maneuvering around the enclosure and has been flying to the higher perches.

On May 30, the veterinary staff cleared the eagle for daily exercise to condition the eagle for release. During the first few days of exercise, the eagle has flown well but has poor stamina. The staff will continue to exercise the bird daily to build the bird’s strength and stamina.

On May 12, the veterinary staff determined that Bald Eagle #15-0642 should be moved to an outdoor enclosure [C4]. The eagle was not eating well inside, and Dr. Meghan felt that a larger enclosure outside may encourage the bird to eat and give her more room to move around.

During the course of ten days that the eagle was in the outdoor C-pen, her appetite improved slightly. The veterinary staff supplemented her diet by handfeeding the bird when she did not eat on her own.

On May 21, Dr. Meghan observed the eagle fly from the ground to a higher perch, showing signs of significant improvement in her ability to fly. Encouraged by her progress, Dr. Meghan moved the eagle to a larger flight pen [A1]; the eagle is sharing an enclosure with fellow Bald Eagle patient #15-0355.

The perches in A1 were lowered so both birds can more easily reach them. The staff will monitor the eagle’s appetite and ability to fly in the larger space.