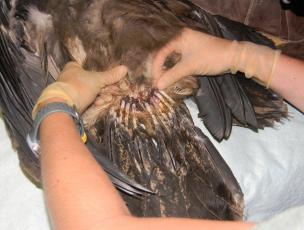 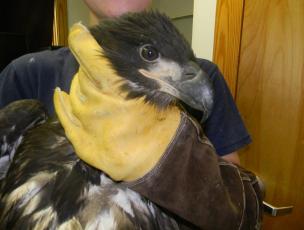 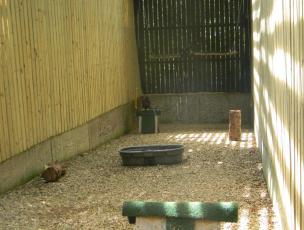 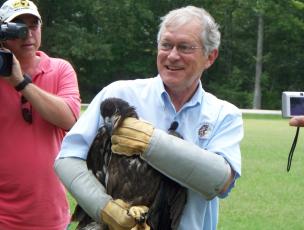 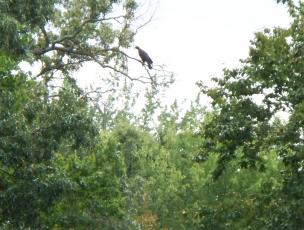 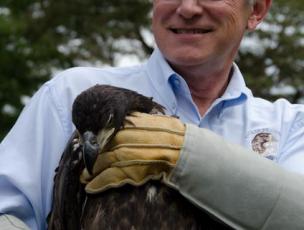 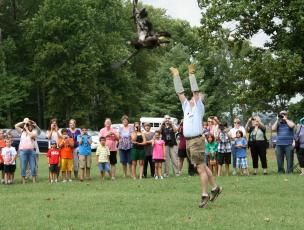 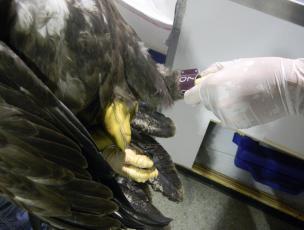 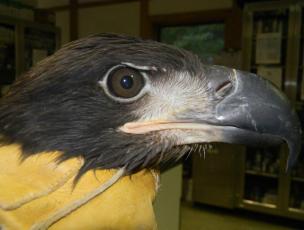 On May 20, a young Bald Eagle was found on the ground in Fort Washington, Maryland.  Unsure of where the nest was located, the rescuer took the eaglet to Feathers & Friends Wildlife Rehab Center.  The permitted rehabber there found maggots at the base of the bird's tail -- where a couple of blood feathers were broken.  This may have happened in the nest, or perhaps during the fall from the nest -- and flies typically don't take long to settle in with those types of injuries.  After cleaning out the maggots and offering supportive care, the rehabilitator at Feathers & Friends contacted another permitted rehabilitator who specializes in re-nesting birds.  After a phone call to the U.S. Fish & Wildlife Service, it was decided that the best course of action would be for the eaglet to come to the Wildlife Center.

This young Bald Eagle appears to be just a couple weeks younger than the Norfolk Botanical Garden eaglets.  Most flight feathers have grown in, though the ends of the primary flight feathers are still unfurling.  The eaglet is a little on the thin side, but is basically in good body condition -- the main concern at the moment is the base of the bird's tail, which is painfully swollen.  Two feathers are missing at this point -- and the other remaining feathers are all "pinched" at the top of the follicle.  While the feathers all appear to be intact, there is the chance that the eaglet could lose all of these damaged feathers. Radiographs were taken on Monday, June 6.  The only significant finding was a "radiodensity" on the eaglet's right wing -- Dr. Miranda describes this as the bone looking "angry."  This could be from the fall from the nest -- perhaps the eaglet hit its wing on something on the way down.  The wing will continued to be monitored. Since the base of the tail is already starting to heal, the WCV veterinary team will house this bird inside for another week, to continue to allow the healing without running the risk of another fly/maggot infestation.   The eaglet is on antibiotics, anti-inflammatories, and pain medication.

The Maryland eaglet appears to be doing well, despite the painful tail injury -- the eagle is perching and eating well.  Today is the last day that the Bald Eagle will receive the opioid pain medications, though anti-inflammatories [which have some pain reliving properties] will be continued over the next few days.  An assessment will be made next week as to whether or not the young bird may be moved outside.

Three new tail feathers are growing in on the Maryland eaglet -- an encouraging sign.  Since the area around the tail feathers is nicely scabbed over, the bird will be moved to a small outdoor enclosure on June 15.

The Maryland eaglet has been doing well in the small outdoor enclosure this past week.  The eaglet is eating well on its own and the tail feathers are continuing to grow in.  Since there isn't any reason to keep the bird in a small enclosure, the young eagle will be moved into one of the Center's largest flight pens on Tuesday, June 21.  Virginia Beach Bald Eagle #11-1234 [KS] will actually be keeping the Maryland bird company.

Bald Eagle #11-1170 was moved into one of the Center's largest flight pens yesterday -- the young eagle actually joined "KS" (Bald Eagle #11-1234 from Virginia Beach).  Both birds appear to be doing well.  The Maryland eaglet has been seen sitting on the swinging perches in the enclosure and can fly the length of the pen.  The bird's tail feathers continue to grow in. KS on swinging perch and Maryland eagle on the A-frame perch:

The Maryland eaglet continues to do well at the WCV, along with eagle friends "KS" and Hampton eagle #11-1235.  The two tail feathers that were missing upon admission to the WCV are still growing in.  The other tail feathers appear to be fine at this point.  Dr. Miranda reports that this young bird is flying well.

The young Maryland eagle will be released on Thursday, August 4 at 11:00 a.m. at Mason Neck State Park.  We hope you can join us for this special release event.

Bald Eagle #11-1170 was released successfully at Mason Neck State Park, in front of a crowd of about 150 people.  The eagle reportedly flew about 100 yards to a large tree to perch and checked out its surroundings.  Prior to release, the Maryland eagle was banded with that well-known purple-colored Virginia band.  The number is 07.

Your special donation will help the Center to provide state-of-the-art medical care to this Bald Eagle … and to the 2,200+ other patients the Center will admit this year.  Please help!