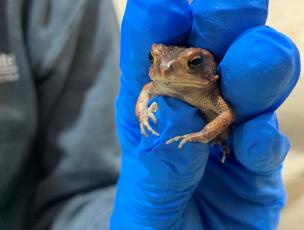 American Toad #19-3281 was admitted to the Center on December 7 after a private citizen found the amphibian in a plant she moved inside.  It is likely that this toad was hibernating in the plant, and came out of hibernation after being warmed by inside temperatures.

The toad is clinically healthy, but since the outside temperatures are not amenable to release, this patient will be kept over the winter in the Center’s reptile room until May, when reptiles and amphibians can be released in Virginia.  The prognosis for this patient is guarded; small amphibians are often fragile patients to maintain in captivity.

The toad weighed five grams upon intake – the equivalent of 250 grains of rice!

Your donation will help provide care to this young American Toad -- and more than 3,000 other patients that the Center is treating in 2019. Thank you!

Toad #19-3281 continued to thrive in the Center's Reptile Room this past winter and early spring, and was released into the wild in its home territory on May 14!

Since this patient's last update, the toad continued to gain weight and the last weight record showed that the toad was 33 grams!  When this patient was admitted in December, it weighed only five grams.

American Toad continues to thrive in the Center's Reptile Room.  This patient is now eating three whole crickets once a day, and has been eating well.  Upon intake, this toad was small at just five grams, but now weighs a whopping 28 grams!  This toad's stay at the Center has been otherwise unremarkable, and he is just awaiting appropriate spring weather after May 1 to return to the wild.

On December 19, Dr. Karra noted that Toad #19-3281 has been eating well, and had some edema, a build-up of internal fluid that causes a swollen appearance.  To assist the release of this fluid, the toad was given gentle body massages which proved effective and resolved the toad’s edema.

Amphibians are able to regulate their internal fluid levels through absorption of water through their skin, and sometimes they can take on extra water while in captivity.  Captive husbandry can’t perfectly mimic the conditions of a wild habitat – in the wild, toads move from place to place to regulate their fluid levels.  When toads are stressed or scared, sometimes they will eliminate liquid waste, which is likely a flight response making them lighter.  Massaging engages that response to minimize the edema.

Edema is something that can arise at any time for a toad in captivity, so the patient will continue to be monitored for this condition.