On September 24, 2011, American Crow #11-2432 was admitted to the Wildlife Center of Virginia. The bird, estimated to have hatched earlier this year, was rescued on the ground near Pulaski, Virginia. While performing the initial examination, the Center’s doctors noted that almost all of the crow’s primary, secondary, and tail feathers were either broken or missing. The crow was also missing feathers from its head and body. Due to the nature of the damage to its feathers, Dr. Dave McRuer and Dr. Miranda Sadar think that the crow was suffering from malnutrition and had been on the ground for quite some time before it was rescued.

The crow spent the first six weeks at the Wildlife Center gaining weight and growing some of its missing feathers -- mainly on its head and body. Because the crow was hatched this spring, the Center’s vets do not expect it to replace its broken and damaged flight and tail feathers until next spring when it should start its annual molt. Normally this would mean that the crow would spend the next few months of its life without primary, secondary, or tail feathers; however, the Wildlife Center of Virginia has just completed a complicated and lengthy procedure known as “imping” in an attempt to restore flight capability to American Crow #11-2432. 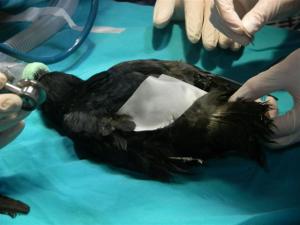 American Crow 2432 is anesthetized before the lengthy imping procedure. The extent of the damage to its feathers can be seen as Dr. Miranda Sadar holds what remains of its tail between her fingers.

Imping is the process of transplanting intact feathers from a donor bird of the same species to a recipient in need of new feathers. This is done by fitting and gluing new, transplant feathers into the trimmed original bases of the broken or missing feathers on the recipient bird. Although the technique has improved over the years, it was first developed by falconers centuries ago. In the case of American Crow #11-2432, the Wildlife Center admitted an adult crow in early December who, unfortunately, did not live very long after arriving for treatment. As unfortunate as its demise was, the crow passed away with all of its primary, secondary, and tail feathers intact and the Center’s vets decided that they would make good candidates for imping.

Dr. Miranda Sadar and Frederick Minazzoli, a veterinary extern from The College of Veterinary Medicine at Western University of Health Sciences in Pomona, California, removed the transplant feathers from the deceased crow and prepared them for imping by cutting their bases and laying them out in order on pieces of medical tape—one piece of tape for each wing and another for the tail. 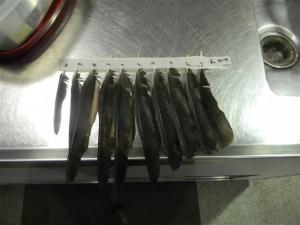 On the afternoon of Monday, December 12, Dr. Miranda and Fred began the arduous task of replacing American Crow #11-2432’s primary flight feather and tail feathers. The crow was anesthetized for the duration of the procedure. While Dr. Miranda carefully lined up each of the donor feathers with the corresponding feather shaft on crow #11-2432, Fred whittled slim pieces of bamboo to insert into the hollow shaft of the crow’s broken feather and the hollow shaft of the donor feather. Once the whittling was complete, Dr. Miranda used epoxy to glue the bamboo pieces into the ends of the two feathers—securing the transplant feather to its new base. 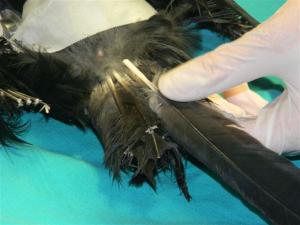 Dr. Miranada lines up a tail feather to be fitted during the imping procedure. 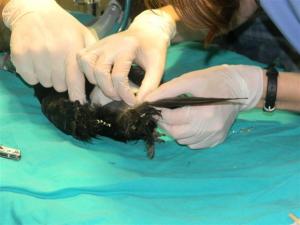 The entire procedure took more than two hours, and although imping is sometimes used to replace broken feathers in the wings and tails of birds, it is rare that all of the feathers need to be replaced. However, once Dr. Miranda and Fred finished their work, American Crow #11-2432 looked like a new bird! Instead of broken shafts, the crow’s wings and tail were now fitted with long replacement feathers. Once it was awake and returned to its enclosure, the crow flew almost the entire length of the enclosure before landing on the ground. Since Monday, the Center’s rehabilitation team has observed the crow in flight several times, and at the moment, the crow’s “new” feathers are all still intact. 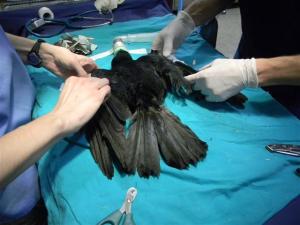 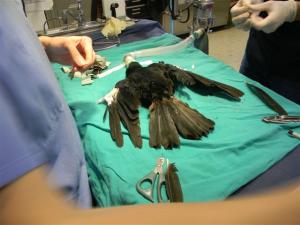 The final feathers are fitted into place.

The Center’s team will continue to monitor the crow over the coming weeks to see if the feathers remain unbroken and in place.

Monday’s blood work was analyzed by the diagnostic team and reviewed by the veterinary staff — all agreed that everything was in order for this crow’s release! On August 16, wildlife rehabilitation intern Zach was traveling south and passed the crow off to someone for release back in Pulaski County. After 328 days of treatment and recovery, the crow returned to the wild!

Last week, rehabilitator Amber noticed that American Crow #11-2432 had a large number of feathers growing in — and the crow had finally reached the point where more than half of its feathers were its own. She moved the crow to a larger flight pen, to check on its flight ability. The crow was caught up for a foot and feather check today, as well as routine blood work. The vet staff found that nearly all of the crow’s feathers have grown or are currently growing in — only a few feathers are missing at this point. The crow is flying well — and the staff are ready to start thinking about release!

The routine blood work will be analyzed and if all is well, after a few more days of exercise, the crow could be cleared for release!

At the American Crow’s last foot and feather check on July 16, the veterinary team noted that the majority of the crow’s feathers are “in blood” — and have grown a little more than halfway in! The next check will be on July 30. As long as the feathers continue to grow well, the crow should be moved to a larger enclosure in August for conditioning for release.

American Crow #11-2432 had a foot and feather check on July 2. The veterinary team noted that the crow continues to molt in new feathers — the current count includes three feathers “in blood” on the right wing, two “in blood” on the left wing, and four tail feathers “in blood”. This means that the crow only has four damaged feathers on the right wing, three on the left, and one tail feather missing. As long the feathers keep growing and aren’t damaged, the crow should be able to be released later this summer.

At American Crow #12-2432’s last foot and feather check on June 18, the veterinary team noted a total of seven blood feathers growing in — three on one wing and four on the other. The molting continues slowly, but surely!

At this week’s bi-weekly foot and feather check, the veterinary staff noted that the American Crow now has two blood feathers on its left wing, and three “in blood” on the right wing. Feather checks will continue every two weeks, but the crow appears to be getting closer to release during each check.

On May 7, the veterinary team caught American Crow #11-2432 for a foot and feather check. During the last check, the staff noted three blood feathers growing — meaning that the crow started to shed a few of its imped feathers, and was finally growing in its own new set. This time around, two additional blood feathers were spotted — an additional feather on the right wing, and one on the left wing.

The molting process may be slow, but the staff are pleased to see the crow starting to grow in a new set of feathers. An additional foot and feather check will take place in two weeks.

During the latest foot and feather check on April 23, the staff were excited to spot three blood feathers on the American Crow — one on the bird’s right wing, and two on the bird’s tail. This means that molting has started — and the crow is slowly growing in some brand new feathers of its own. The staff would like to ensure that all is going well before release, and that the crow has most of its own feathers in by that point. Another foot and feather check will be performed in two weeks’ time on May 7.

American Crow #11-2432 was caught for a bi-weekly foot and feather check on April 2; no changes were observed with the bird’s feathers. While the crow is able to fly well most times, rehabilitator Suzy has noted that on days with very heavy rain, the crow does have a harder time getting around. The team will wait for some indication of molting prior to release.

American Crow #11-2432 continues to fly well in one of the Center’s flight pens. When a bi-weekly foot and feather check was performed by the veterinary team on March 18, Dr. Adam noted that the crow is missing one imped feather on its left wing, otherwise, all other feathers remain intact. The team would still prefer to see the beginning of a molt cycle before considering release — just to be on the safe side.

After another month of living in its outdoor flight pen, American Crow #11-2432 has lost one of its imped tailfeathers. The other imped feathers remain attached; however, some of them are a little tattered.

The crow has not yet begun molting its feathers but it continues to receive bi-weekly feet and feather checks. the Center’s veterinarians want to continue monitoring the crow for the time being and it is currently scheduled to receive a complete blood count next month.

After more than a month, American Crow #11-2432 has not lost any of the feathers Dr. Miranda and Fred imped! Rehabilitators Suzanne Doell and Amber Detrick have also observed the crow flying in its enclosure almost every day and it continues to eat very well on its own. However, the hospital staff agrees that it still too soon after its “imping” operation to plan for its release yet. For now the veterinary and rehabilitation staff will continue to watch the crow in its enclosure and hope that it continues to improve. If after several more weeks, #11-2432 still has all of its replaced feathers and it continues to eat and fly well on its own, then the Center’s staff will discuss plans for the crow’s release.

So far, so good — American Crow #11-2432’s imped feathers continue to remain intact. The veterinary team will continue to monitor the feathers each week, while the crow flies and builds up stamina. If all continues to go well, the crow should be able to be released in a few weeks.