Chimney Swifts are not your ordinary bird! These insectivores live most of their lives “on the wing”, covering up to 500 miles a day – they even eat and drink while in flight. Chimney Swifts eat up to 12,000 mosquitoes, termites, flies, and other insects each day; as they skim over ponds and creeks, they scoop up water in their mouths. Due to their foot structure, Chimney Swifts are incapable of perching, even on tree limbs. Specialized toes, tail feathers, and long sharp nails allow them to cling to vertical surfaces. Unfortunately, these birds' numbers are declining significantly due to loss of nesting sites.

Chimney Swifts roost and nest inside brick or masonry chimneys, or occasionally in barn silos or old city smokestacks and hollow trees. These neighbors can be a little noisy at times, so conflicts most often arise when they roost in a homeowner’s chimney.

In Virginia, Chimney Swifts typically raise nest between June and August, so even if the birds are noisy, the noise is short-lived!

The swift parents build a cup of sticks, glued together with their own saliva, that attaches directly to the inside chimney wall.  In a typical house chimney, there is usually only one nesting pair. Chimney Swifts can only build nests in chimneys with inner walls made of stone, firebrick, or masonry flue tiles with mortared joints. They can’t attach their nests to terracotta walls or stainless steel liners. 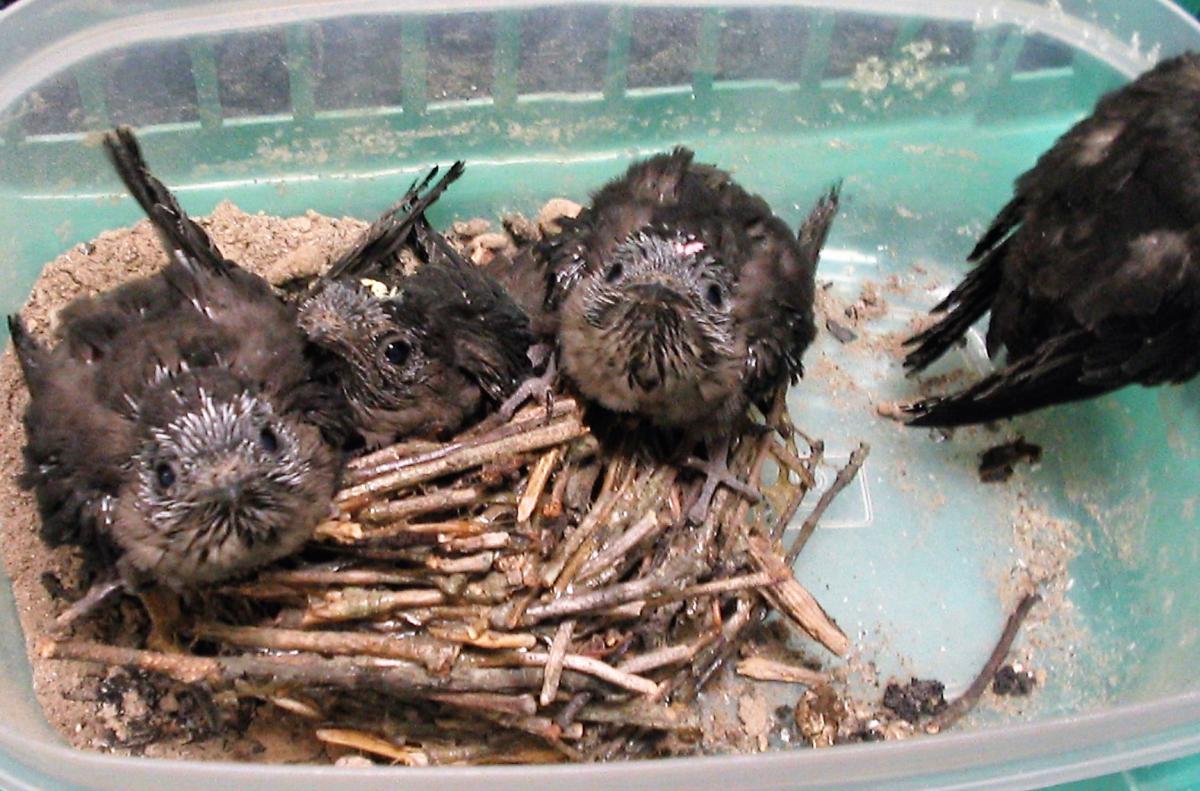 About three to five eggs are laid in a clutch and are incubated for about a week. After eight days, the chicks start to develop pin feathers; by day 14, their eyes open. At this point, they make frequent and loud begging noises, which is what often draws the attention of the homeowner. The young birds are usually ready to fly and leave the chimney at about 30 days of age.

Noise problems: Older juveniles do make a lot of noise in the daytime as they beg their parents for food. This can be very annoying to some homeowners, but remember, it will only last about two weeks. By allowing the birds to remain in the chimney, you are directly contributing to the conservation of a declining species – you are making a real difference!

There may also be a short period in August and September where hundreds of birds roost overnight in a chimney.  This occurs as they prepare for migration; Chimney Swifts congregate in large flocks before they fly to South America for the winter.  In an average year, a single swift can fly 1,350,000 miles!

If you hear birds in your chimney, close the damper to reduce noise and to prevent birds from accidentally getting into your house or fireplace.  If you do not have a damper, stuff some foam rubber up in the opening (not fiberglass). Delay doing any chimney cleaning until after the babies have fledged and left the chimney. Check that your chimney sweep knows that it is illegal to remove a nest when Chimney Swift babies are still in the chimney.

Fallen Nest: Chimney Swift saliva is very good at holding nests together, but sometimes becomes unglued after heavy rains or if the chimney is very dirty. There are a wide variety of chimney and fireplace structures and designs, so there is no one solution in every instance of a fallen nest. Replacing the nest may require considerable innovation, and in some cases may not actually be possible. There are several options worth exploring, however, before you call a permitted wildlife rehabilitator.

Option #1.  Place the nest and uninjured nestlings in a shallow wicker basket and place it on the smoke shelf just above the damper. The basket must be either weighted or wedged in such a way that it does not tip over when the parents land on it to feed their young.

Option #2. Place the nest and uninjured birds in a shallow wicker basket that is secured to a rope; lower it into the chimney from above. Make sure rope is secure at both ends.

Option #3. Tape the nest or replacement nest to a broom and wedge the broom up and into a corner of the chimney above the damper.

Remember, in each attempt, the nest needs to be at about the same height where the parents initially built it. Do not feed the babies before placing back in the chimney; swifts are very difficult to safely feed, and a hungry bird will make noise and quickly draw the attention of the parents!  If the nest is down a long time and it is very hot and humid, you can take the babies to a permitted wildlife rehabilitator for fluids before making a re-nesting attempt.

Single Bird Found in the Fireplace: Single babies with few or no feathers should be taken to a permitted rehabilitator. For feathered birds, it’s important to correctly identify if the bird is a juvenile or an adult.

Adults: Adult swifts have very long wings; when the bird is at rest, their wings cross over their tail. Adults are usually silent, as opposed to their more vocal juvenile counterparts. If you find an adult swift in the fireplace, simply capture it and release it outside. Swifts have difficulty taking off from the ground, so a small toss in the air may be helpful.

Juveniles: Younger swifts haven’t yet grown into their wings, which are shorter than their bodies. Young swifts will typically chatter when approached – raising an alarm call or making the food-begging call. As long as the bird is healthy and can grip with its feet, it can be returned to the chimney, similar to how nests should be returned to the chimney. Depending on the bird and the chimney style, use a broom, box, basket, or lower a rope from the top of the chimney.

After any young Chimney Swift is returned to a chimney, continue to monitor that the reunion has worked. Listen for sounds of adults flying in and out of the chimney to feed the babies.  You should hear the loud chattering of juveniles. You can use a flashlight to look in and check on the young after you replace them.

If you find an injured Chimney Swift of any age, place it in a cardboard box with an old cotton T-shirt (not terrycloth).  Do not attempt to feed or give water. Call a permitted wildlife rehabilitator as soon as possible.

How you can Help Chimney Swifts

Clean your chimney annually to keep the chimney free of creosote build-up; annual cleanings will provide a clean surface for successful nest attachment.  The best time to clean a chimney is in mid-March or when the local wood fire season is over.

When hiring a professional chimney sweep company, select one that is reputable and actively promotes Chimney Swift conservation. Nests are not a fire hazard, nor do the birds cause any structural damage to the chimney or fireplace.

To Cap or Not to Cap?

Capping a chimney will prevent many species of wildlife from roosting or denning in your chimney --  bats, starlings, sparrows, owls, squirrels, wood ducks, and raccoons are all species that could decide to use your chimney. By preventing access, you will not inadvertently hurt or kill an animal when you make a fire.

However, capping chimneys prevents swifts from roosting too – and there is a serious loss of available roosting and nest sites for this declining species. Consider not capping if you have a masonry-lined chimney.

If you add a stainless steel liner to your chimney, please add a cap on top. Otherwise, Chimney Swifts may enter thinking they will be able to roost, but will become trapped without an appropriate surface on which they can grip.