Bald Eaglets #14-0649 [C35] and #14-0650 [C46] were admitted to the Wildlife Center in May 2014 after both were found down on the ground in Chincoteague, Virginia -- the birds' nest blew down after a storm and was unable to be restored. Following three months of rehabilitation, both of the young eagles were released at the Chincoteague National Wildlife Refuge on August 20, 2014.

Center staff were able to track the travels of C35 for about 17 months, from the date of its 2014 release to January 2016 when tracking data was no longer being received. Based on the bird's last-known location, it's possible the area did not provide adequate cellular service for the device to function, or the eagle may have died due to unknown circumstances.

C46's tracking unit remained online for five and a half years! The bird's solar-powered GPS tracking unit's battery progressively showed low-level charges during 2020, with the final update recorded on April 9. 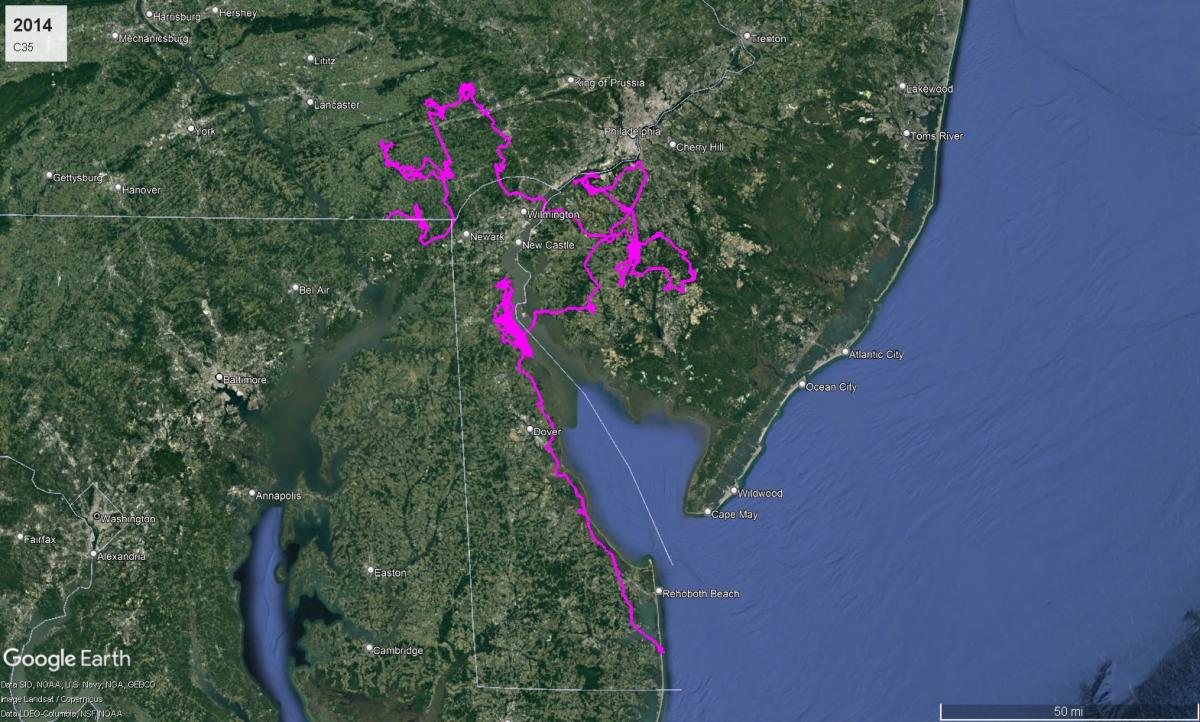 Similarly to C35, C46 began to travel northward soon after his release on Chincoteague Island. Unlike C35, though, C46 didn't fly too far -- he spent the following four months on the Chincoteague Bay in Virginia and the Rehoboth Bay in Maryland, consistently staying near the Atlantic Ocean. 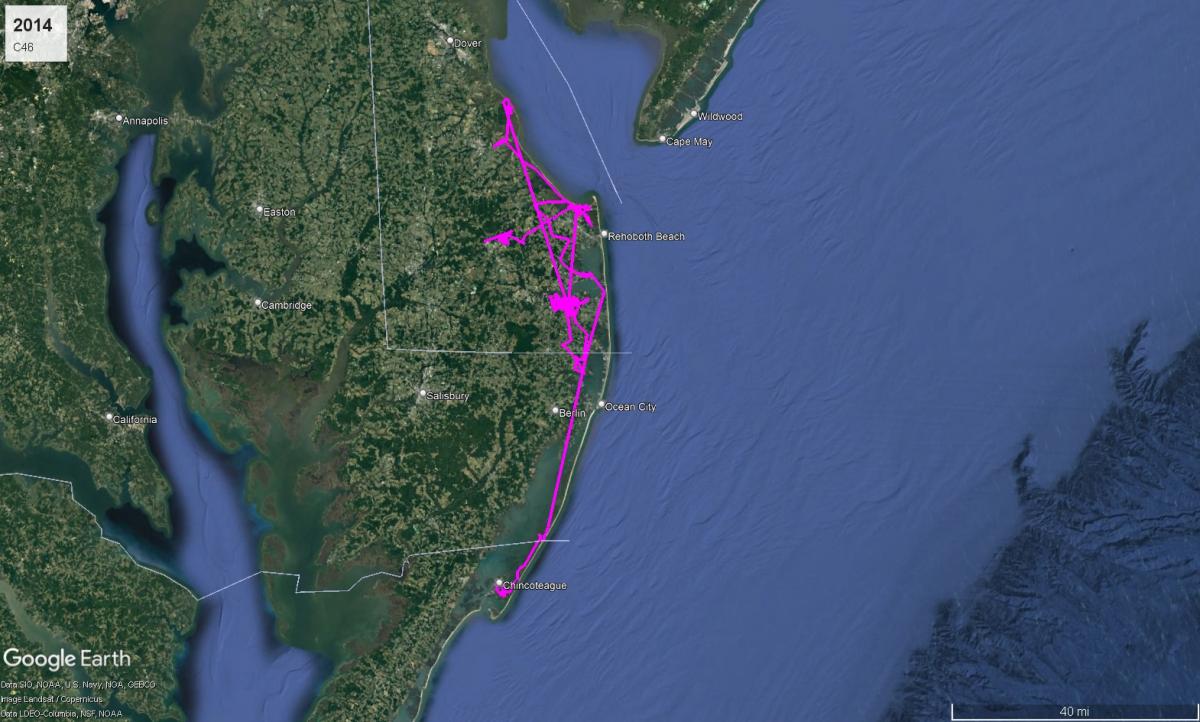 Throughout 2015, C35 made several extended journeys along the Delmarva Peninsula -- a landmass roughly 200 miles in length adjacent to the Chesapeake Bay. While she spent the most amount of time near Lancaster, Pennsylvania, C35 was also seen visiting Chincoteague Island on multiple occasions. 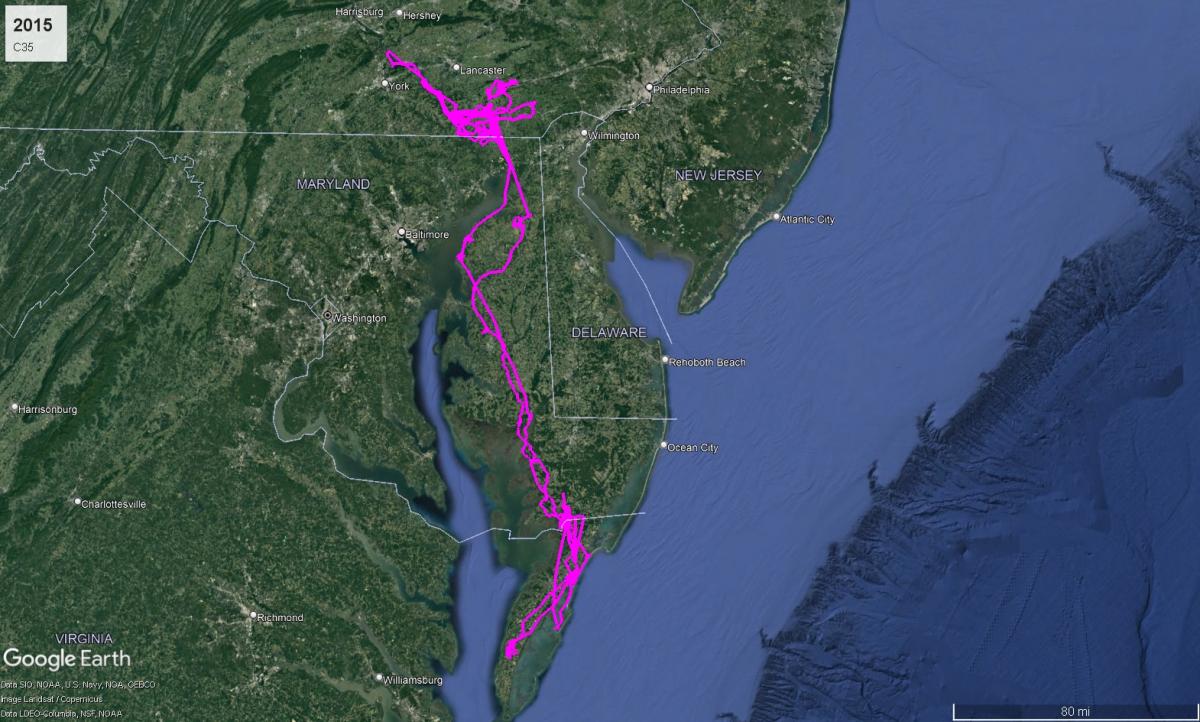 C46 spent the entirety of 2015 relatively close to his release site on Chincoteague Island. While he routinely crossed the state lines between Virginia, Maryland, and Delaware, he never left the peninsula -- a sign that the available habitats and resources there were quite suitable for a maturing Bald Eagle. 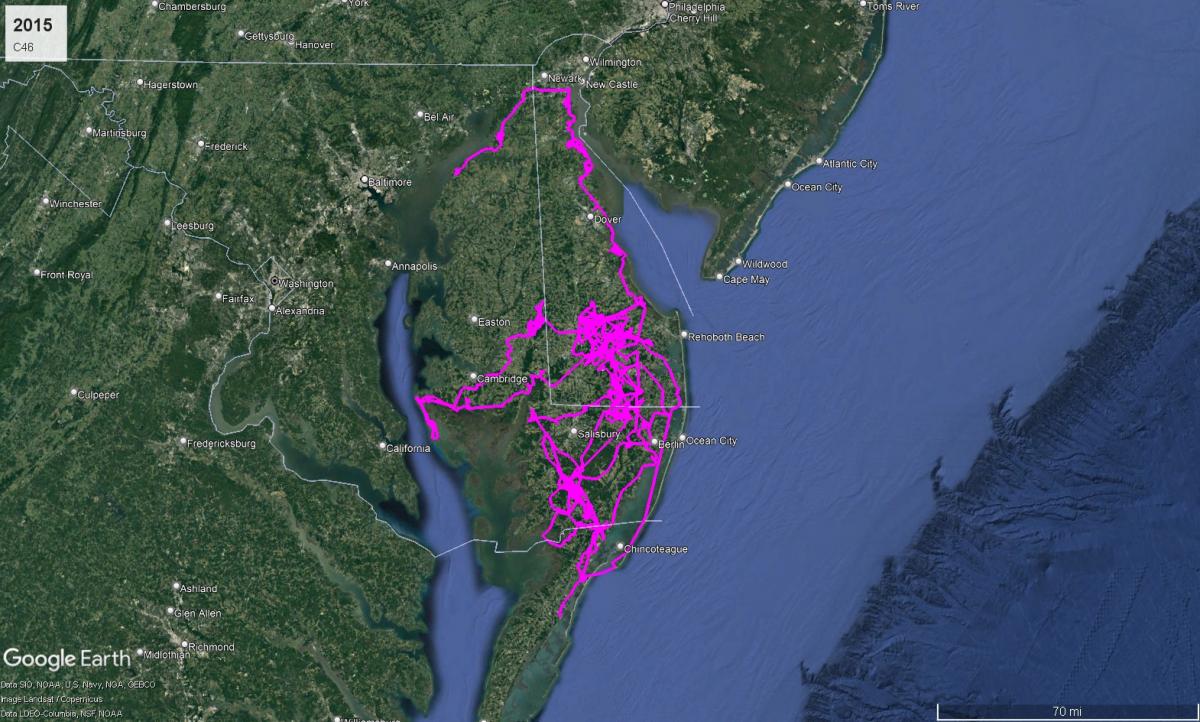 C35 kicked off 2016 by flying south from Pennsylvania back toward the Eastern Shore of Virginia. In just a few weeks, she was observed checking in at Onancock and Hog Island later on. C35's final tracking data transmission occurred on February 20, 2016. At that time, the eagle hadn't left the Eastern Shore region of Virginia but was actively traveling along the Chesapeake Bay and exploring the smaller islands and bodies of water along the peninsula. 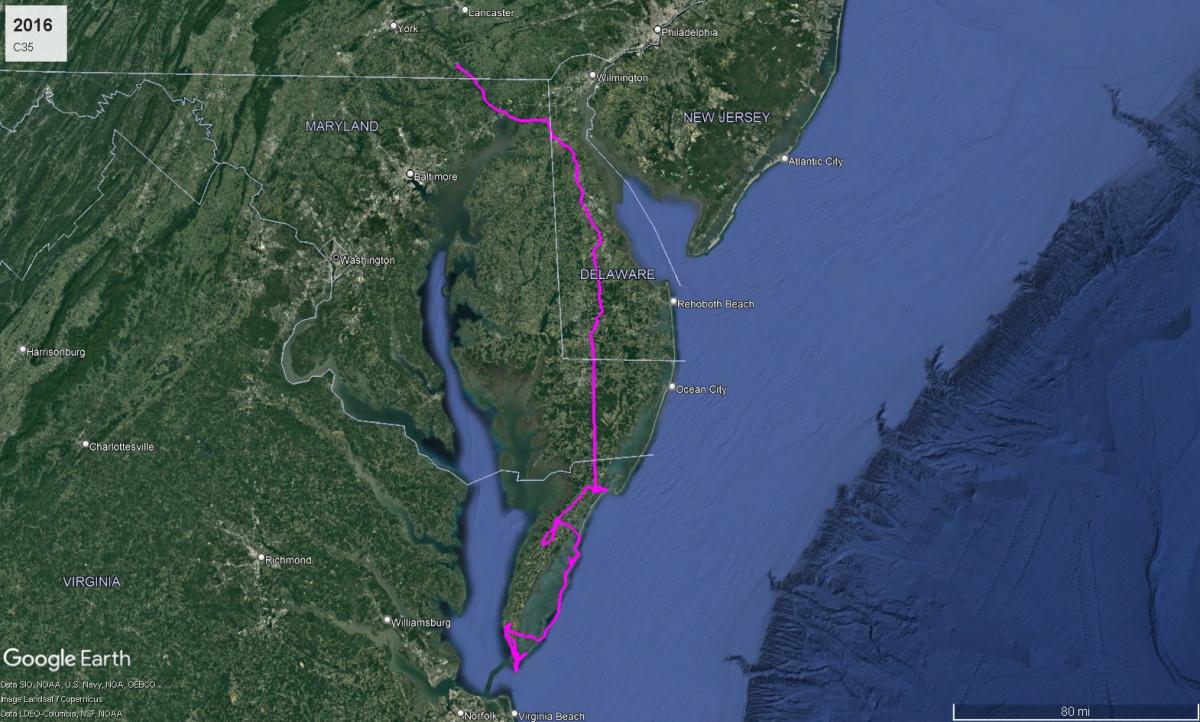 Throughout 2016, C46 spent another twelve months moving throughout coastal Virginia, Maryland, and Delaware on short-distance flights. C46's tracking data does show some irregularities during this year, however; the perfectly-straight lines of movement are not realistic in terms of his actual movements. Most likely, C46's transmitter was having difficulties communicating with the cellular networks available in the region, resulting in gaps in the data set. 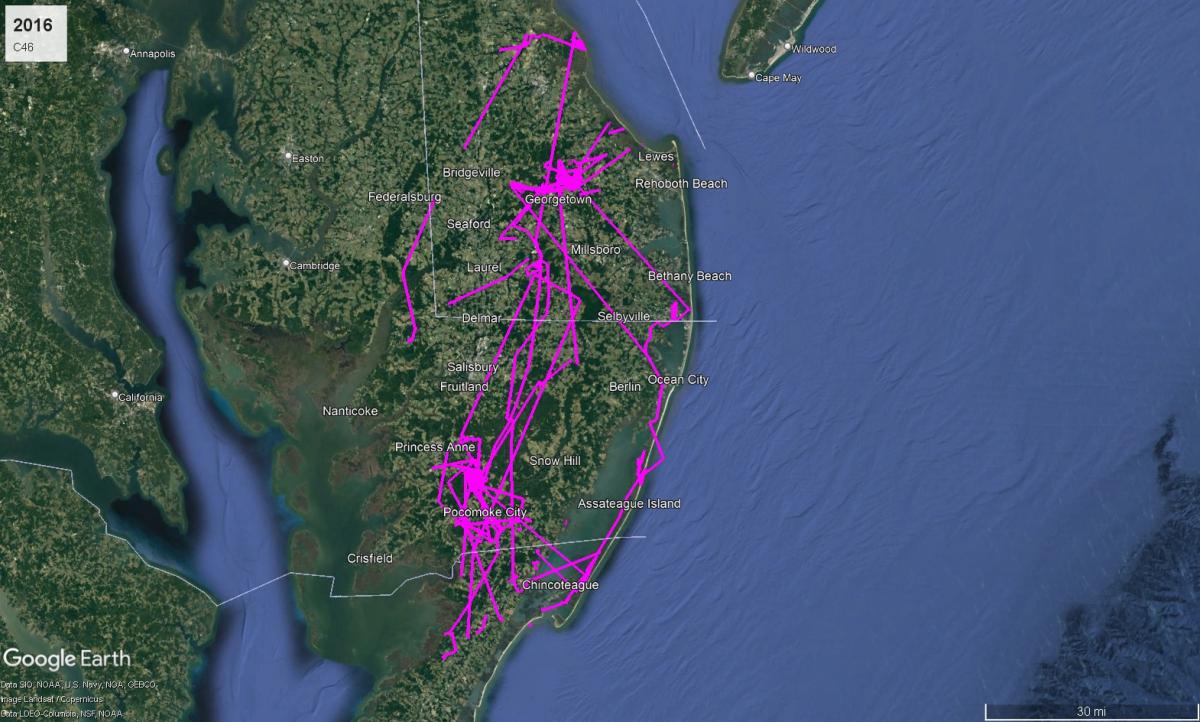 During 2017, C46's tracking data became more sporadic compared to the previous years. Even though the limited availability of adequate cellular networks and possible degradation of the tracking unit's battery resulted in fewer data points to analyze, C46's movements weren't too difficult to decipher; he spent another year traveling the Delmarva Peninsula, visiting Chincoteague Island, and exploring the rural agricultural areas of the region. 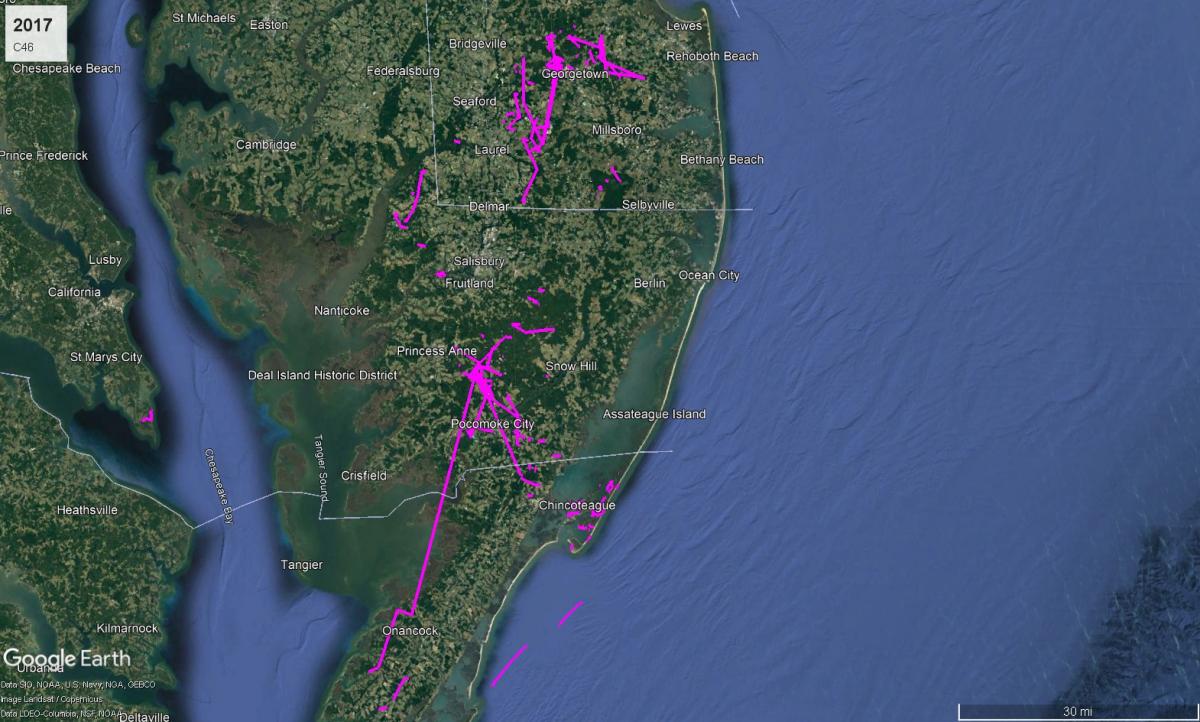 C46's tracking unit continued to regularly check in during 2018 despite decreasing communication with the online servers. Once again, he spent the year traversing the Eastern Shore and visiting both human-populated and rural areas. 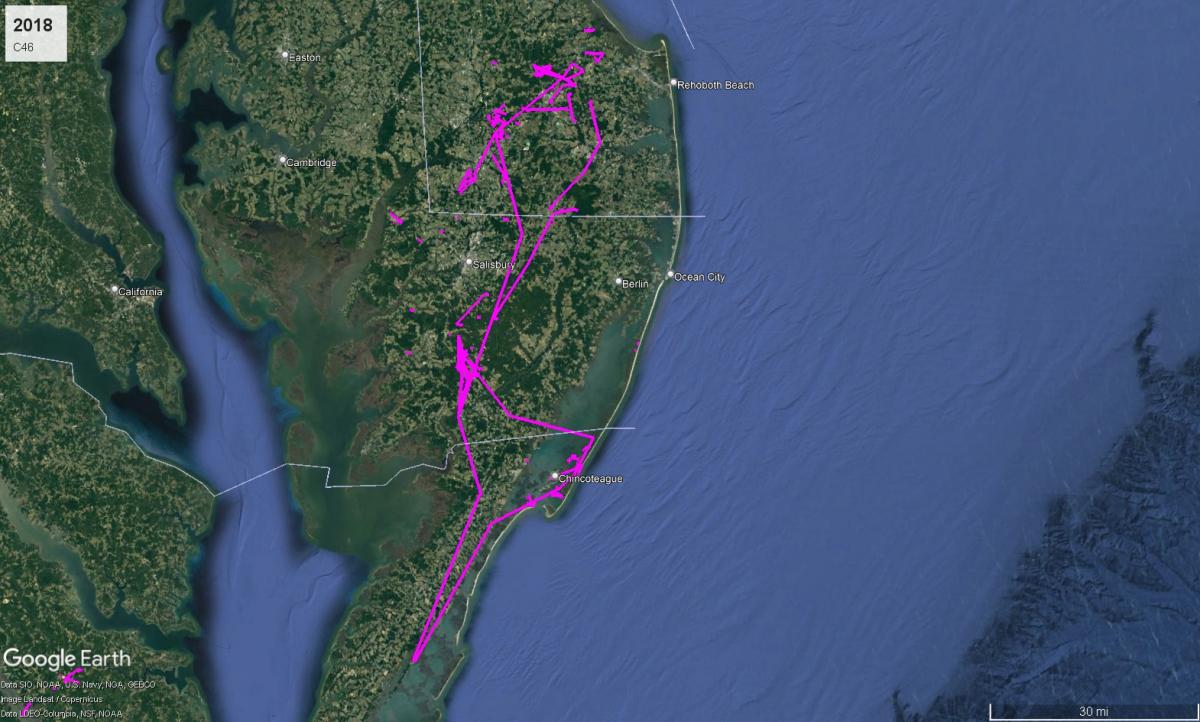 After five months without a check-in, it was presumed that Bald Eagle C46’s tracking unit battery was depleted – but this bird surprised us! On January 25, C46’s tracker did a “data dump” for the past four months. We can see that this bird spent time in its usual territory of southern Delaware, southeastern Maryland, and the Eastern Shore, including Chincoteague Island in Virginia. 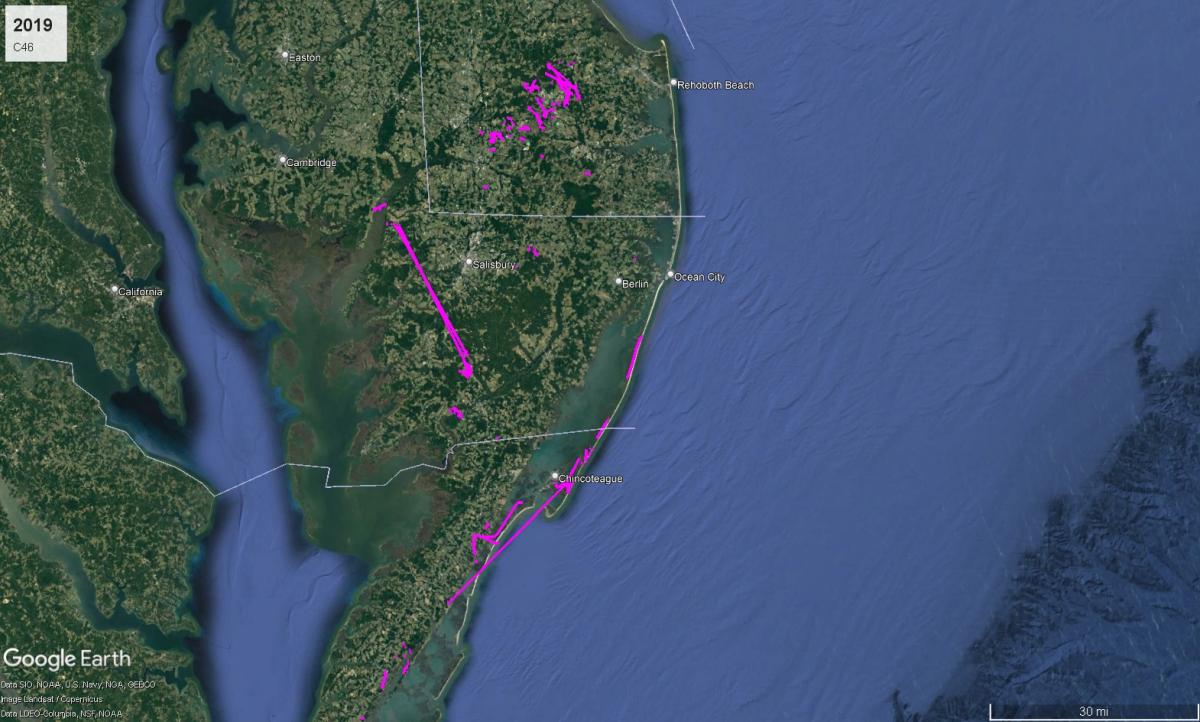 Following several months of tracking unit silence, C46's data was successfully uploaded just after the New Year. At this point, the eagle's GPS unit was reporting a low battery voltage -- unsurprising, given the age of the transmitter. During 2020, we saw C46 leave the Eastern Shore for the first time since his release while making a short trip across the Chesapeake Bay to Virginia Beach. His last recorded data point was uploaded on April 10, 2020. Coincidentally, C46's last check-in placed him just a handful of miles away from Chincoteague Island -- the same site of his release five and a half years earlier. 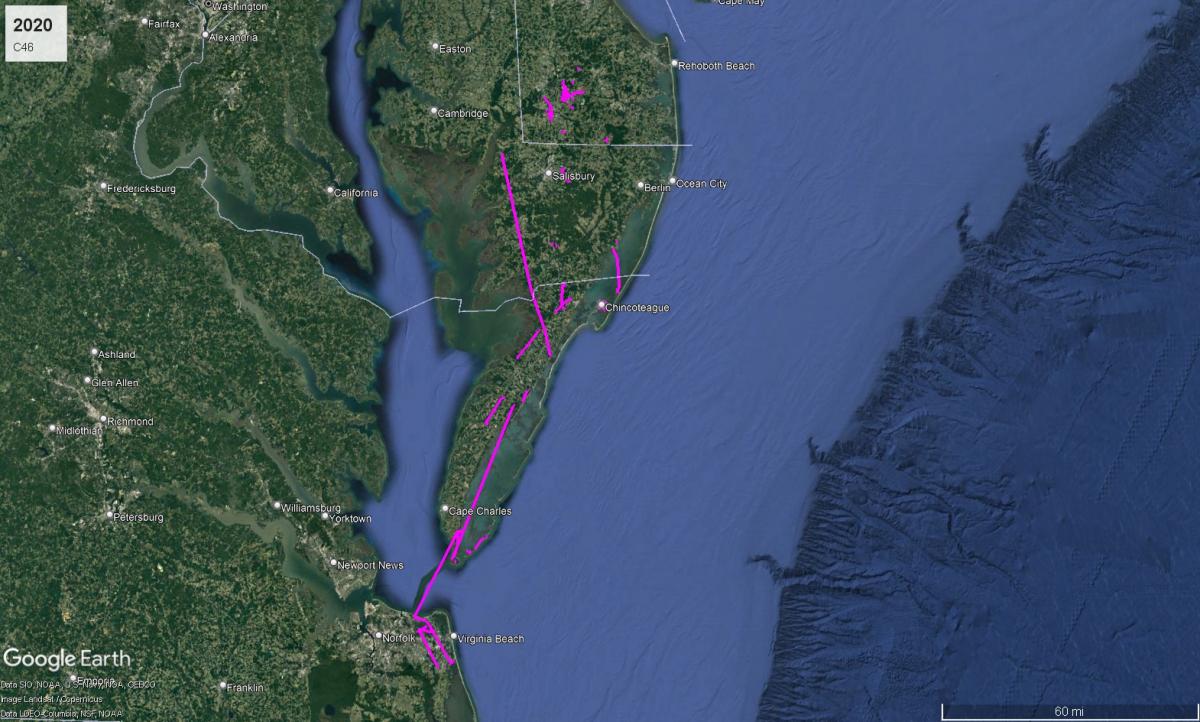