What to Expect When You’re Expecting…Turtles

The time I have spent at the Wildlife Center of Virginia over the past 12 weeks has been one of the most incredible experiences of my life. Growing up not far from this area, I have been familiar with the Center and its outreach since I was a child. My dad and I even brought in an injured hummingbird when I was a kid! But I had never seen the rehabilitation side of things, and as an environmental science major, interested in conservation, this externship seemed like a perfect fit. 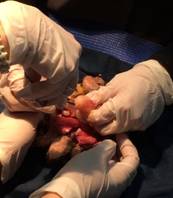 Still fairly early on in the externship all the externs were gathered together, and we were asked a very strange question: Who wants to be the turtle momma? After a brief moment of confused silence, I raised my hand, not really sure what exactly I was volunteering for. It turned out that we had received a female Eastern Box Turtle that was gravid, meaning she was carrying eggs. (You would say that a turtle is gravid, not pregnant.) Unfortunately, this turtle did not make it, but rather than letting her eggs die with her, the vet staff removed the eggs. The hope was that the eggs would then be incubated and hatched at the Wildlife Center. I was to be their surrogate mother.

At first, I had a small panic attack, as I imagine all new mothers would have, and became extremely nervous about holding these little turtles’ lives in my hand. I knew very little about reptiles, let alone hatching eggs.But when the tub of small oval eggs was handed over to me, I swelled with pride at the thought of those little eggs hatching one day. Over the course of the externship, we received more gravid turtles (both box turtle and snapping turtle) who tragically did not survive. These eggs were also extracted and added to the growing collection of eggs in the reptile room. By mid-summer we had nearly 30 eggs!

Once the eggs were removed from the mothers, they were passed over to me, and I would then bury them in a plastic incubation container filled with sand. The eggs were spaced evenly apart and covered lightly with the sand. 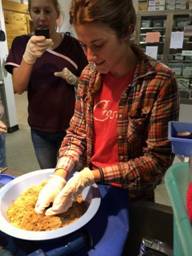 Once turtle eggs are laid, they embryos attach to the top of the shells. If the egg is turned once the embryo has attached to the top, it will drown in the fluids within the egg. For this reason, it is best not to move or handle the eggs once they are placed in the nest. The container is then placed in one of the “stacks” in reptile room to incubate for the next 50-90 days. One of the most interesting things about hatching eggs is that the turtle’s gender is determined by the incubation temperature. If the temperature is between 75°F and 80°F then the eggs will be male. If the temperature is 83.5°F or higher the eggs will be female. The incubation temperature was placed within the range of 81°F and 83°F, in hopes that there would be an even distribution of male and female hatchlings. 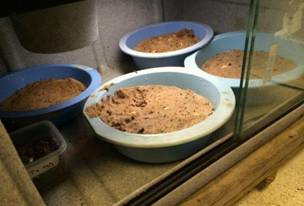 Turtle eggs, unlike bird eggs, have a soft, leathery exterior that is sensitive to humidity changes, so it was very important to keep the nesting medium (sand) damp. To maintain an appropriate percent humidity, the eggs are misted three times a day, in the morning, midday, and in the late afternoon. If there is too much water, the eggs could become fully saturated and drown. If they are not hydrated enough, the egg would collapse in on itself and become unviable. Infertility also causes some of the eggs to collapse. 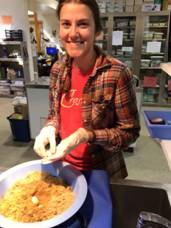 So far none of the eggs has hatched, but I still have hope! It is important to protect box turtles because, sadly, their population is in decline. These turtles do not reach sexual maturity until they are 5-10 years old, and even when they are mature they must travel long distances to find a mate. The search for a mate is further complicated by habitat fragmentation, meaning that the box turtles must cross developed areas to locate a mate. For this reason, many of the turtles admitted to the Center are struck by cars. Once the female has mated, she will lay 3-10 eggs, but unfortunately, many of these will not hatch, and even fewer will reach sexual maturity. This is why the Wildlife Center’s work to save adult (and unhatched!) box turtles is so vital to conserving this wonderful species.