The Trauma of the Turkey Vulture

When I first applied for the rehabilitation externship here at the Wildlife Center of Virginia, my email started with: “I am in love with a Turkey Vulture.” The vulture I was referring to is an educational animal I worked with at the New Mexico Wildlife Center (formerly The Wildlife Center) out in Espanola, New Mexico. His name is Sol, and he opened up my eyes to the fabulous world of vultures. I’ve been hooked ever since. 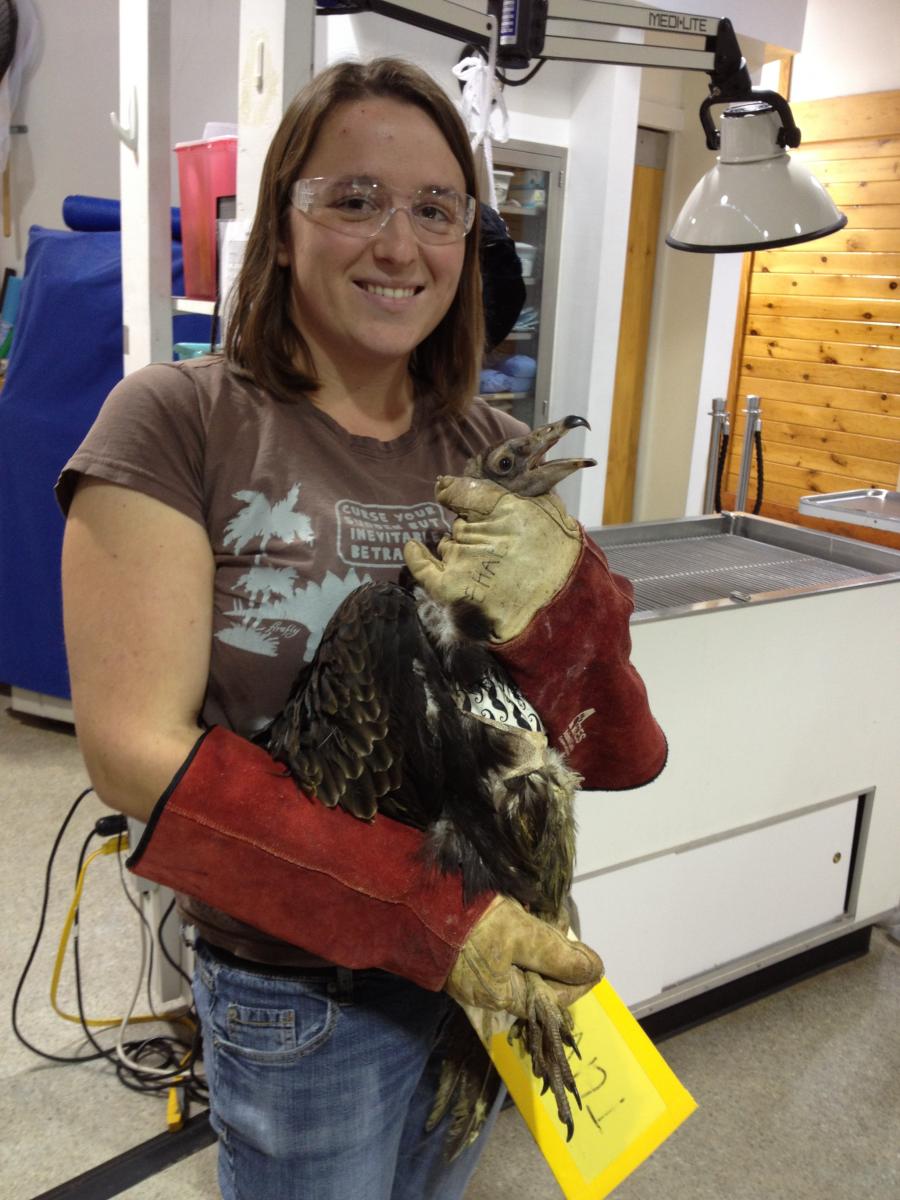 It seems that my email must have struck a chord with a kindred spirit at the Wildlife Center, because a few short weeks after I sent that email, I arrived in Virginia, eager and ready to start learning everything I could.

While I learned more than I could succinctly say in one blog post, I was slightly disappointed that there were no vulture patients for the first several weeks of my externship. It wasn’t until a Turkey Vulture came in toward the end of my time here that I started to learn the ups and downs of rehabbing vultures.

While vultures are usually categorized with falcons, hawks, and eagles in the category “birds of prey”, they have a few key differences. One is their diet: dead meat. Whether it’s rabbit, fish, deer, etc -- if it’s dead, vultures will eat it. In doing so, vultures provide a vital service to the environment; they’re acting as nature’s cleanup crew, eating meat that has very possibly been out rotting for hours or even days.

However, all other raptors prefer to kill their prey live and eat it fresh. While there are some birds of prey who, like vultures, will eat carrion—Bald Eagles, for example—they still have the adaptations of raptors: incredibly strong wings, a wickedly sharp beak, talons to match, and the grip strength to really drive the message home. These are birds that are built for hunting by watching, chasing, and ultimately killing their prey.

Vultures, however, aren’t built for hunting—their food is already dead. As a result, these birds are built differerently. Their feet are very weak, compared to the incredible grip strength of owls or eagles. Their wings are made for soaring and energy-conserving flight, not for chasing. And while the beak is very strong, it’s meant for ripping open dead flesh, not killing.

Because of these divergences, trauma cases in vultures can be very different than in other birds of prey. In the case of most raptor fracture cases, the raptor is usually admitted fairly soon after injury; without working wings or legs, the bird can’t hunt and, as it weakens from lack of food, it’s easier for people to capture. Vultures, however, don’t need to hunt for their food the same way other raptors do. If a vulture has a broken wing, for example, it can still continue to find food by walking instead of flying to compensate for the injury.

As a result, vultures often come into the Center with fractures that are already old and, in many cases, healed. In some cases, the fracture has callused and set itself fairly well and is healing on its own. In other cases, the fracture has started to heal poorly. This means that in order to fix the fracture and realign the bone correctly, the healing bone would need to be reset, which is incredibly painful and stressful. Setting fractures often requires the use of intramedullary (IM) pins, which are inserted into the fractured bone to hold it in place while it heals. However, using such techniques have limitations; if the fracture is too close to the joint, IM pins aren’t an option.

This was true for Turkey Vulture 14-2293, a juvenile who came into the center on October 29. When the veterinary staff examined him, they found a fractured right radius and ulna (the two bones of the forearm), along with a fractured left coracoid (a bone in the shoulder). The intake radiograph showed callusing around the fractures in the radius and ulna, indicating that they were old fractures that had already begun to set. The fractures were also close to the elbow joint, making them difficult to work with so intramedullary pins weren’t going to work. But because the fractures seemed to be fairly well aligned, the veterinary staff decided to simply stabilize the wing and give the fractures the chance to keep healing on their own.

In the meantime, we fed the vulture a diet of skinned, chopped rats. He often refused to eat on his own, though, so we would tease-feed him, dangling piece after piece in front of him, sometimes opening his mouth and placing it inside to encourage him to eat. The vulture’s bandage was changed regularly, and we kept a constant watch on how much he ate when tease-fed versus how much he ate on his own. We also kept track of his weight, which is a regular check at the Center. Weight loss is often one of the first indications to us that something is wrong.

Sadly, in the case of this Turkey Vulture, the recheck radiographs one week later showed that the two bones hadn’t set the way we’d hoped. Instead, they had callused together, which would have created problems for this bird extending and flexing his wing. Also, the elbow had luxated (dislocated), and with so many issues surrounding that joint, there was no way to fix him so that he could fly normally. He was humanely euthanized.

While it was disheartening to see, it was also a valuable experience, and a very educational one. This isn’t a field for the faint of heart. Decisions are made based on what’s best for the animal, not what’s best for us. If you can handle the downsides, there are amazing upsides. While I was here, I handfed squirrels, tube-fed bunnies and opossums, captured eagles, exercised owls, and wrangled fawns. What I’ve loved most about working here is how real everything is. It’s life and death, healing and hurting, the struggle to survive; everything is right there on the surface, in rain, shine, or snow. All of these animals are trying to live in their own way, and all of these people are trying their best to help them do just that. I am so incredibly grateful that I got to witness it all firsthand.