Before starting my twelve-week wildlife rehabilitation externship, I thought I knew a lot about the native wildlife here in Virginia. It turns out that I had an incredible amount to learn! It would be impossible to write everything I discovered about wildlife in one blog post, so I decided to talk about three major myths I believed before they were debunked during my training.

1. If a fawn is seen without a mom, it is an orphan.
It’s normal for deer moms to leave their babies for most of the day. In fact, moms only briefly return to their fawns once or twice in a 24-hour period to let them nurse. This seems weird to humans because it’s so much different from the survival strategy of our species! It turns out that most of the fawns that come into the Wildlife Center do not need to be rescued. People who see a fawn without a mother assume that the animal is abandoned, when, in reality, it’s simply part of how deer behave. In general, fawns that enter into human care are actually much less likely to survive than if left where they were found. 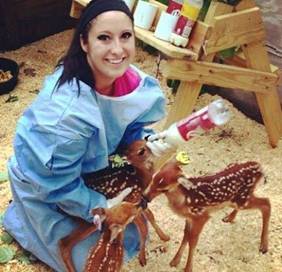 Have you ever heard the saying that girls are made of sugar, spice, and everything nice? Well, fawns in human care are made of stress and germs … with a dollop of adorable. I’m not going to lie, it was cool to be able to bottle-feed the fawns that came in. However, there were a ton of procedures we followed in order to prevent the animals from getting too stressed out. Deer can develop a condition called capture myopathy, in which they get so stressed from human interaction that their organs start shutting down. Another problem with deer is they carry lots of zoonotic diseases -- diseases that can be transmitted between animals and humans. We donned sterile gowns, boot covers, and gloves before touching any deer. This was one of many containment techniques used when working with the fawns.

So what to do if you find a fawn? Unless the mom is known to be dead or the fawn is injured, leave it alone! You’ll actually be doing more harm than good if you remove it from the area.

2. Opossums are dirty, ugly, and aggressive.
Opossums are probably some of the most misunderstood animals that I got to work with at the Wildlife Center. First of all, they are absolutely ridiculously cute. You can’t look at the picture below of opossum babies without feeling your heart skip a beat. Second of all, they are actually fairly clean in comparison to most animals. Like cats, they tend to use the bathroom in one area and are meticulous groomers. In fact, our education opossums are “litter box” trained! Finally, opossums are much more scared of you than you are of them. In the opossum’s eyes, you’re the predator. The classic opossum fear reaction: hissing, mouth open, and jumpy movement, is all designed to tell you to walk away … not that the opossum is going to run up 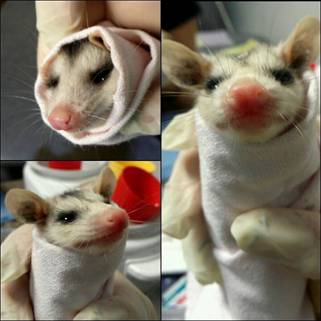 Unfortunately, the opossums’ unearned bad reputation encourages many people to trap and kill these animals. I’m not saying that you should try to go domesticate an opossum. Far from it! They’re wild animals who need to be left in the wild. However, people don’t need to go out of their way to remove or eliminate this species.

So what do you do if you happen to see an opossum trundling along? Unless it’s known to be injured, you should let it be. It’s likely to just pass on through, without harming you or your property.

3. You should try to feed an orphaned animal you have rescued.
Most animals have specific diets. For example, Chimney Swifts are insectivores, so they can’t eat fruit. Feeding a Chimney Swift anything but insects would be just as harmful as feeding a horse some steak. A common misconception about baby mammal diets is that a mother’s milk can be replaced with cow milk or other easily obtained substitutes. In reality, each species has its own mix of nutrients needed to keep babies healthy. Feeding a baby mammal 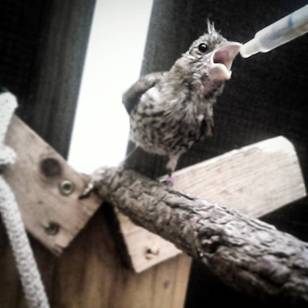 the wrong formula can lead to serious consequences, including GI issues, bloating, and death. We feed each mammal a species-specific formula. We have a different mix for bunnies, opossums, fawns, and squirrels. The formula even differs between babies that have their eyes open and eyes closed!

If you find an orphaned or injured animal, the best thing to do is to call a wildlife center before offering any sort of food. They’ll be able to tell you the best thing to give to your rescued animal before getting it to a rehabber.

Like I said, this is just a drop in the water in comparison to what I was able to learn at the Wildlife Center during my externship. This experience has opened up a passion for working with wildlife, and I can’t wait to keep expanding my understanding of the animals that live around us! 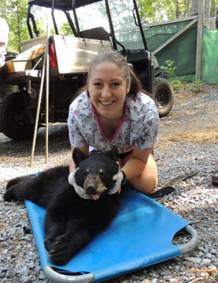