Hummingbirds are small birds found throughout North, Central, and South America characterized by thin needlelike bills, colorful iridescent feathers, and fast wing beats that create a humming or buzzing noise when flying or hovering. Hummingbirds are currently placed in the order Apodiformes, along with swifts, and make up the family Trochilidae.

The hummingbirds’ long bills are used to obtain nectar from long tubular flowers which the bird drinks using its long tongue. Hummingbirds are attracted to red flowers, which is the reason most hummingbird feeders are red. Male hummingbirds are brighter and flashier than females, and have iridescent throat feathers called a gorget. These gorgets may aid in mate attraction or resource defense. Hummingbirds flap their wings in a figure-eight pattern, can gain lift from both sides of their wings, and are able to fly in any direction, including backwards and upside down.

The majority of hummingbird species are found in Central and South America. Only 23 species out of the 336 total hummingbird species have ranges in North America. In Virginia, only one species, the Ruby-throated Hummingbird (Archilochus colubris), is found regularly throughout the summer during their breeding season, but the Calliope Hummingbird (Stellula calliope) and the Rufous Hummingbird (Selasphorus rufus) can occasionally be seen passing through the area in fall or winter.

Ruby-throated Hummingbirds migrate to Central America for the winter and make the journey there by flying across the Gulf of Mexico. In order to travel so far, hummingbirds rely on stored energy from food and their flight ability. Ruby-throated Hummingbirds birds are excellent flyers and can beat their wings about 50 times a second. They nimbly dart and zip quickly between nectar sources at an impressive rate. Hummingbirds have high metabolisms and need a rich diet of sugary nectar to support them. In addition to feeding on the nectar of flowers, hummingbirds also catch small insects, such as fruit flies or gnats, out of the air.

Because of their small size and heavy reliance on their ability to fly, Ruby-throated Hummingbirds can be very difficult to treat, care for, and rehabilitate. Every year the Wildlife Center of Virginia receives a few Ruby-throated Hummingbird patients. Since 2011, 43 Ruby-throated hummingbirds have been admitted at the Center. Out of the total 43 hummingbirds, only 15 survived and were able to be released. Hummingbirds must be able to use both of their wings to not only to fly between food sources, but also to make the journey across the Gulf of Mexico. Hummingbirds also have very short legs and are not able to walk or hop much, and mainly use their legs for perching. Therefore, hummingbirds need to be in excellent flight condition in order to be released, and, due to their size and fragility, traumatic wing injuries in hummingbirds are difficult to treat and repair.

The main reasons why Ruby-throated Hummingbirds are admitted to the Center are collisions with windows, cat attacks, orphaning, and unknown trauma. Hummingbird patients are housed in a soft-sided mesh enclosure [reptarium] with perches, flowers, and feeders full of nectar. Hummingbirds are small and fragile, so it’s important to be quick and gentle when handling them. 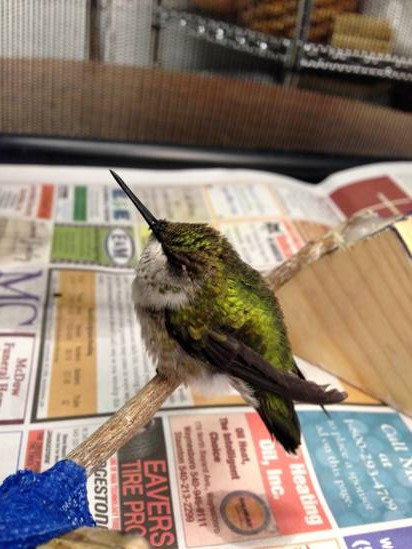 Every year the Center raises one or two juvenile Ruby-throated Hummingbirds. The juvenile orphans are not able to fly very well at first and so the Center’s rehab staff and volunteers look after and feed them until they are grown and able to fly. Unlike other juvenile birds the Center treats, hummingbirds are not fed solid foods and instead encouraged to drink nectar from a feeder. Every fifteen minutes throughout the day, the feeder is shown to the bird to ensure they are eating.

In addition to healthy juvenile orphans, the Center has also successfully rehabilitated a few injured hummingbirds this year. One was stunned by hitting a window and another was a cat attack victim. The hummingbird found after hitting a window was released within a couple days of its admission it was in excellent flying condition. The cat attack hummingbird miraculously was still able to fly well but had wounds, and a significant number of feathers missing. After its initial care, the Center transferred the hummingbird to a permitted rehabilitator who specializes in hummingbird care; the bird will need to be overwintered.

So far in 2014, the Center has admitted 11 Ruby-throated Hummingbirds. The first came in on May 2 and the last was admitted October 2. Because hummingbirds need to migrate south, the Center needs to release Ruby-throated Hummingbirds by the end of October in order for them to have time to travel. If a bird is not in a suitable condition to be released, then it will need to be overwintered.

Ruby-throated Hummingbirds can be a fun visitor to observe in your backyard. Male Ruby-throated Hummingbirds defend territories of flowers and feeders and will fight and chase of any other birds that try to feed there. Occasionally, you may see several females all feed from the same feeder. Hummingbird feeders are a great addition to backyard habitats, but before placing one outside you should make sure there are no outside cats around that can prey on the birds; feeders should also not be placed too close to a window. Cornell Lab of Ornithology “All About Birds” recommends making a sugar water mixture with one-quarter cup of sugar per cup of water. Hummingbird nectar should also be changed regularly to prevent bacteria growth. At the Center, the nectar is changed three times a day. At home, you don’t need to go to that extreme, but should change feeders every few days especially if the sugar water becomes cloudy or discolored.

Hummingbirds are truly amazing animals and add to the great diversity of species on the planet. Many hummingbirds are important pollinators for plants and therefore have an effect on the other species around them. Hummingbirds, as well as many other animals, can be helped by keeping cats inside. In order to conserve hummingbirds and other species, it’s important to stay educated on what you can do to help.

For more information about hummingbirds check out this fact sheet from Defenders of Wildlife and South Dakota Birds and Banding site. There is also an amazing documentary by PBS Nature called “Hummingbirds: Magic in the Air” that I highly recommend.