Papa and the Owlets: A Surrogacy Success Story

Every year the Wildlife Center receives numerous displaced, orphaned animals. While rehabilitators are often able to successfully raise these young animals and mimic many natural history characteristics for each species, some behaviors are best left to the experts – animals. The Wildlife Center sometimes uses adult animals to help raise injured and orphaned animals of the same species. This spring I was fortunate enough to spend some time observing one of our resident “experts” – Papa G’Ho – help rear two displaced Great Horned Owlets that were brought into the Center.

Before each owlet was allowed to hop and fly around Papa’s enclosure, there was a short time period where the owlet was placed in a crate to allow Papa to familiarize himself with the owlet’s presence. The introduction between orphan and surrogate is always important because you never know how one will react toward the other. As a result, both owlets were left in a crate for more than a day before the crate was opened, and the birds mingled freely. In both instances, after their crates were opened, the two owlets quickly adapted to their new surroundings and their new surrogate Papa! 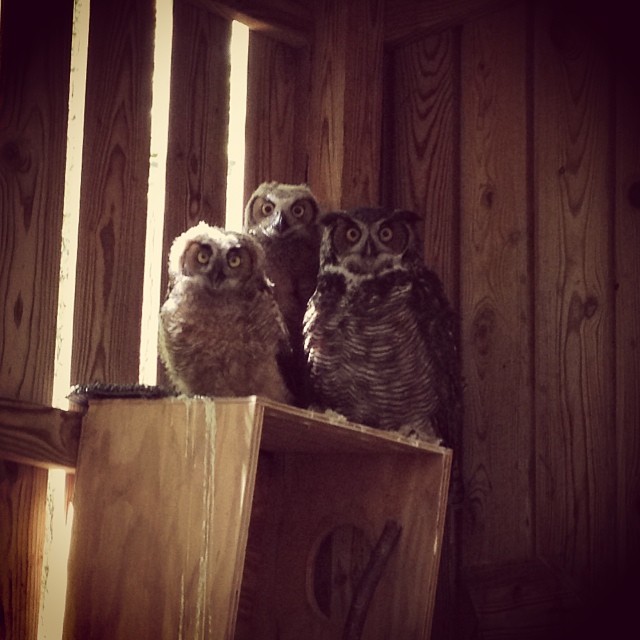 As many of you may have seen on one of our Critter Cams, Papa and his new owlets quickly became inseparable. They can often be seen all together on top of their owl box in the back right corner of the pen. As a first-hand observer, I can attest to the behavioral traits that are being passed from Papa to each of his charges, as they often display very similar defensive characteristics whenever they are approached.

Papa’s behavior was one of the main reasons he was kept as a surrogate here at the Wildlife Center. Though he suffered a wing injury that made him non-releasable back when he came to the Center twelve years ago, Papa’s defensive habits toward humans meant that he could teach young orphans how to fear and avoid us, a critical trait needed in wildlife to ensure their ability to be released back into the wild. Young raptors are at a relatively high risk for imprinting on humans, so having a surrogate like Papa to carry out the orphan’s rearing helps ensure that these young birds have the ability to thrive once they are released.

The Center also employs other surrogates than just Papa. Currently, we have a non-releasable Barred Owl patient acting as a surrogate for an orphaned Barred Owlet. Additionally, two yearling Black Bears are currently acting as surrogates for five cubs in the bear pens. We hope that, through the use of surrogates like Papa and others, the Wildlife Center will be able to release orphaned animals with the behavior and tools they need to successfully adapt to life in the wild.