Exercising Raptors at the Wildlife Center of Virginia

I have been a rehabilitation extern at the Wildlife Center of Virginia (WCV) for three months, and during that time I have learned countless things about native Virginia wildlife. One of the things I found most interesting was the flight conditioning of raptors. Once a bird is healthy enough, and is living in an appropriately sized enclosure, it will be “exercised” before it can be released. Flight conditioning involves making the raptor fly from one end of the cage to the other for a set number of times, or “passes.” The number of times the bird must fly back and forth depends on the condition of the bird, how long it has been in the enclosure, and when it will be able to be released. Most birds will fly away from you when you approach them, which is how you get the raptor to go from one side of the cage to the other; however, sometimes a raptor will be stubborn and refuse to fly, in which case you try getting closer to the raptor, waving your arms and stomping your feet, or even taking a pool noodle and putting it near the bird to scare it away. While exercising, you always want to stay to one side of the enclosure so that the raptor flies in the middle of the cage and doesn’t hit the wall (or you) with its wings. 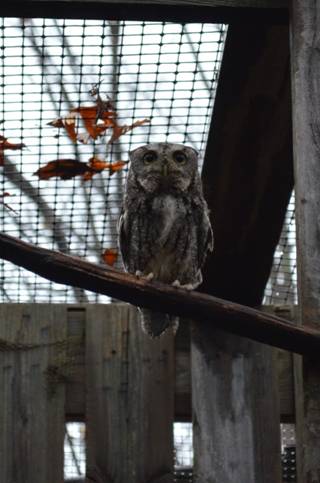 Only certain cages at the WCV allow for exercise, and some birds can only be exercised in specific cages. For example, A-pens are the largest pens at the Center and are typically for exercising eagles and vultures. Flight pens are smaller than A-pens and are used to house and exercise all large and medium-sized raptors, including Great Horned Owls, Barred Owls, Barn Owls, and different kinds of hawks. B-pens are the smallest pens and are used to house Eastern Screech-owls. There are seven small enclosures within the B-pen complex where the screech-owl patients live, and a large area in the middle of the pens called the “yard,” where the screech-owls are exercised.

There are several things you must note while exercising a raptor; some are the same for all species, but others are more specific criteria. First of all, when exercising a bird, you want to push the bird to its fitness level but not to the point of exhaustion. If you see a bird open-mouth breathing, refusing to fly, and/or its wings drooping, then stop exercising the bird immediately whether or not it has reached the optimum number of passes. Several items need to be recorded during an exercise session: the number of passes, the altitude at which the bird flew, the patient’s stamina, if the bird perched or not, and the position of the bird’s wings, tail, and feet. The more you exercise the different species of raptors, the more knowledgeable you will become in what to look for and will know what is “normal” among the different species. For example, owls need to be completely silent when they fly since they must sneak up on their prey, hawks depend mostly on speed to catch their food, while vultures depend on neither stealth nor speed to eat since they are scavengers. This means that these three species will have different criteria for what is normal and necessary in order for them to fly successfully and be released.

Before a bird can be exercised, it must first be cleared by the veterinary staff as being healthy enough to do so. After that, the raptor will be exercised at optimum level for at least seven days; optimum level means that the bird is flying the minimum number of passes required for the species. The patient must also have good height, good endurance, and good maneuvering. After those seven days, the raptor can be considered a candidate for release as long as all the other release criteria are met.

A complete list of criteria to note during exercise is listed below:

The inactivity forced upon recuperating wild animals often results in their loss of physical fitness Exercising raptors at WCV is an extremely crucial part of the rehabilitation process and is necessary before a raptor can be released.

Here are examples of raptor exercise in action at WCV: