An Eastern Screech-Owl (EASO) is swooping down within reach of its prey when … wham! It is struck mid-flight by a vehicle. Thus begins the unfortunate story for many Eastern Screech-owls – this one in particular is about one we will call #14-0150. Fortunately for EASO 150, it has been found and brought to the Wildlife Center of Virginia.

On March 12, EASO 150 is admitted to the Wildlife Center. Shortly after its arrival the owl is examined by the veterinary staff. They carefully examine its body, observe its behavior and vital signs. Owl 150 has some serious trauma to its left eye; there appears to be no visual ability remaining. Throughout the examination, 150 grows weaker and weaker. Vet staff decides if 150 survives and becomes stable enough, the eye will be surgically removed.

Once the examination is over 150 is placed in Hold, a quiet area where all Wildlife Center patients stay while too sick or injured to be in larger outside pens. Here 150 is given daily medical exams, medications, and food (all predators at the Center are served dead prey items).

On March 19, owl 150 is finally strong enough for surgery; one of the Center’s veterinarians removes the bird’s left eye. After surgery, 150 is once again placed in Hold where it is carefully monitored for signs of infection.

On March 31, the sutures around the bird’s eye are removed and 150 has improved enough to be moved to a much larger outdoor enclosure where it can fly. After two weeks in this new 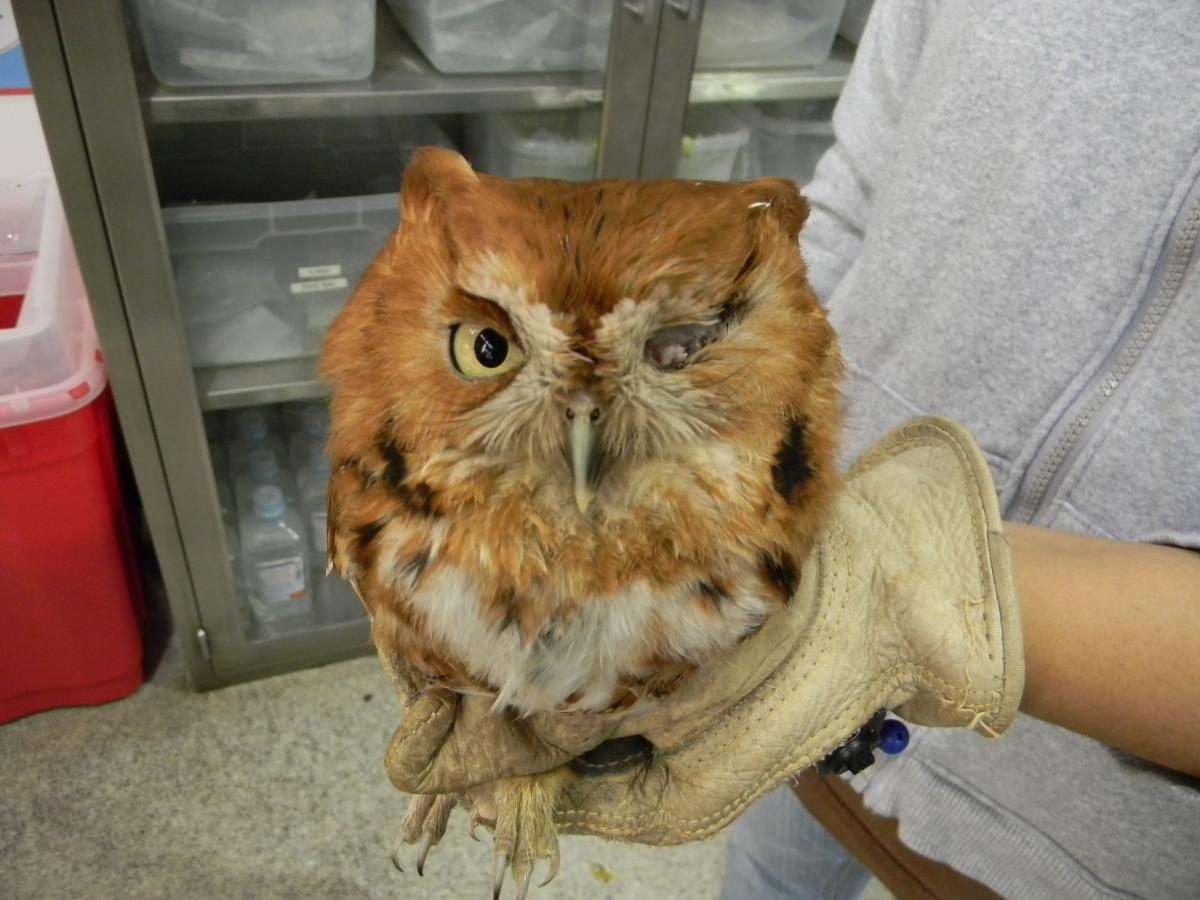 enclosure, 150 has made enough improvements to begin exercise. (Birds are exercised to help strengthen the muscles and stamina weakened by injury and/or inactivity during the time spent under medical supervision in Hold. Exercise also ensures proper conditioning for the patient’s return to the wild.)

It is, as is for most birds at the Center, a rocky start for 150. It is not easy to fly under the constraints of an enclosure; restricted flight is confusing for some patients. After about 10 days of exercising, 150 is finally improving. 150 can navigate around and through obstacles, can perch well, and flies with good altitude and is silent in flight. Silent flight is extremely important in owls; if they are not silent they cannot properly hunt because prey will hear them coming. Owl 150 continues daily exercise to improve stamina.

On May 5, owl 150 has improved so much with exercise that it is ready for the next step in the rehabilitation process: mouse school (or live prey school). For the next five nights, two live mice are place into a large tub filled with leaves in the owl’s enclosure. Owl 150 must catch and eat at least one mouse per night for the next five nights in order to be deemed a capable hunter. 150’s hunting skills are sharp, passing mouse school without a hitch. The next steps is a blood test, to make sure that 150 is healthy and ready for release. 150’s blood showed no indication of a problem. Time for the final step – banding.

On May 12, 150 is fitted with some new jewelry (a U.S. Fish and Wildlife band) and is ready for release. Wildlife Center staff arranges transportation for 150 back to Rockingham County.

On May 16, a little more than two months after sustaining its injury, a one-eyed 150 was released back into the wild.

The story of 150 has a happy ending. There are many others not so fortunate. In my time at the Wildlife Center, I have seen a large number of our patients (mostly EASOs) come in. The majority are struck by vehicles. People should be aware that there is something significant they can do to prevent such tragedies: do not litter. Even such things as throwing apple cores (or other biodegradable objects) out your car window will attract both predator and prey to roadsides, thus increasing their likelihood of being struck. If you see injured wildlife, please notify your local rehabilitator immediately. And of course – slow down! There is a whole world outside that requires sharing.