Can We Keep It? 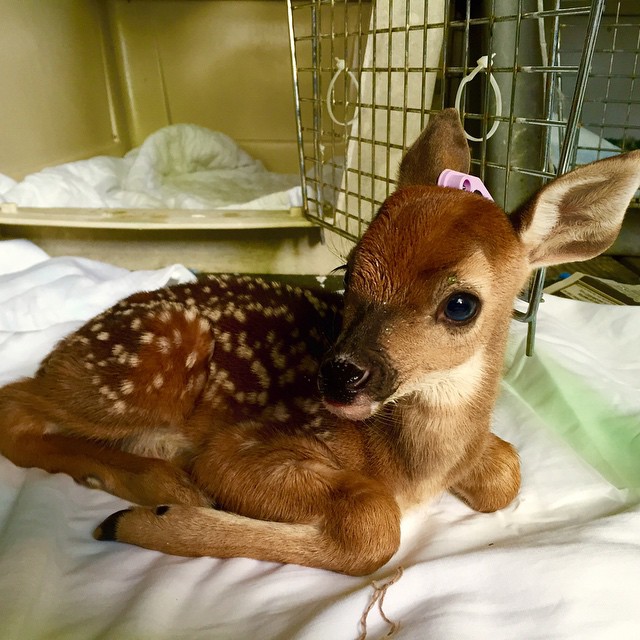 “It’s adorable! Don’t you just wish you could keep it?”

“I couldn’t do your job, how can you bear to euthanize an animal?”

Those are the two most common questions I hear when receiving a patient into our hospital. Unfortunately, they can sometimes apply to the same animal, with the link being “inappropriate human possession.” It’s a convoluted phrase, but at its simplest, it means keeping a wild animal in captive conditions without due care for future release.

For the first question: “… don’t you wish you could keep it?” Quite simply, no! Working at a wildlife hospital, we deal with creatures on a daily basis who are scared, injured, frightened, and traumatized following human contact. Our examinations are as brief as possible without compromising diagnostic capability; our treatments are coordinated to minimize handling. We don’t talk to the animals, we avoid staring at infants. To the best of our knowledge, in their eyes, we resemble gigantic predators whose every utterance can be translated as “snack time!” All of these precautions describe “due care for release” and align with the guiding principles of the National Wildlife Rehabilitators Association:

Wildlife rehabilitation is the treatment and temporary care of injured, diseased and displaced indigenous wildlife and the subsequent return of healthy animals to appropriate habitats in the wild.

If you are not a trained, permitted rehabilitator, keeping a wild animal in care is not in that creature’s best interests. At best, the animal’s chances of recovering from injury plummet due to severe stress. At worst, that animal adapts, and ceases to view you as a threat – it may even come to you for food. Upon release, the outcomes are depressingly predictable for an imprinted animal: starvation, dog attack, cat attack, car collision, hunting fatality, or neighborhood nuisance and eventual euthanasia. A squirrel approaching humans for food may appear “cute” until it becomes destructive; a black bear tends to tear garbage bins and gardens apart.

Humans as a species are not benign -- we commandeer large metal boxes hurtling along at high speed, we keep large carnivores in our homes, so an animal that views us as “safe” or as a food source is immediately at risk.

So, we come to the second question: “... how can you bear to euthanize?” I always find it a difficult topic, but a surprisingly easy question to answer. Understanding the severity of an animal’s injury and the long-term consequences of that injury means that euthanasia is a treatment option – not just an ending. Knowing that I have prevented a recognisable level of suffering that could not be prevented any other way means euthanasia is in the same category as stitching a wound, or surgically pinning a bone. It’s an essential treatment in the humane care of that animal.

But sometimes I also may need to humanely euthanize physically healthy animals that come through our doors when they are displaying highly inappropriate behavior due to prolonged close contact with people. Sadly, these animals think I am their friend. I am a human, and I represent a species that is definitely not their “friend”.   In these cases, I can bear to humanely euthanize a too-friendly animal in order to prevent it from suffering from a likely outcome: starvation, dog attack, cat attack, car collision, or neighborhood nuisance and eventual euthanasia. It is never a decision made lightly, and constitutes the darkest part of an otherwise inspiring job, made all the more horrible by the fact that the situation is frequently preventable from the start.

Rescuing a wild animal is a hugely selfless act and the first step in the often-long process of returning that animal successfully to the wild. Regardless of the circumstances of rescue – each person who goes to the effort to bring an animal through our doors has been an inspiration with the level of compassion and empathy displayed. We all want to see our wildlife remain wild, and we can all contribute in small ways to improve the (sometimes overwhelming) odds of an animal returning to its native habitat.