Between a Tree and a Hard Place

I have just finished up a very enjoyable stint as a rehabilitation extern at the Wildlife Center. During my time I got to work with a large array animals, everything from White-footed Mice, White-tailed Deer fawns, Horned Grebes, eagles, and everything in between. 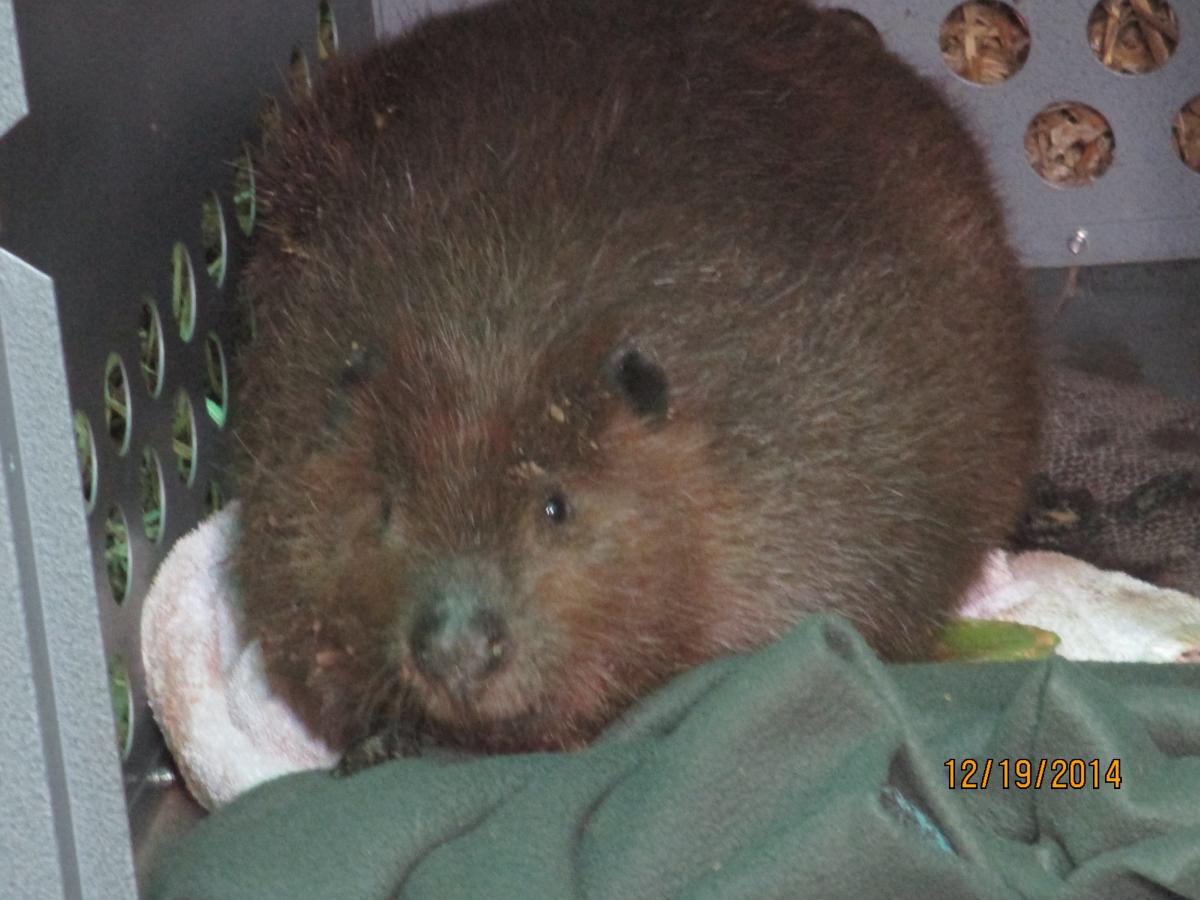 On one recent, magical occasion I worked with a North American Beaver. The period between intake to release only spanned about 48 hours, but goodness gracious, it was fun. Before I tell that story, here’s a little natural history on the noble beaver.

There are two species of beaver: the North American beaver (Castor canadensis) and the Eurasian beaver (Castor fiber). Beavers are active almost exclusively at night. While being incredible swimmers, they are very vulnerable and clumsy on land and spend most of their time in the water. They can stay submerged for almost 15 minutes at a time. Almost all beaver dams have an underwater entrance to allow the beavers to escape from predators more effectively; the underwater entrance also keeps predators out. Now that you have a little background information, on to the story.

It began as most of my days off from the Center: sleeping in a bit, not getting out of my PJs until noon -- that kind of thing. Then my cell phone rang. When I answered, I realized that it was Kate, WCV’s front-desk coordinator. At one point, earlier in my externship, I had told her to call me if there were ever any animals that needed captured or transport. Kate said that she had gotten a call from a woman who found an injured beaver on her property – and she was in desperate need of some help. I told her I was more than happy to help and was soon out the door driving out to the property.

I called the finder to get a little more information; she answered the phone obviously just beside herself with worry about this poor beaver. After I got her calmed down, she told me that two hunters found a beaver on her property; the beaver was trapped under a tree that it had chewed through. The property owner and her husband had spent nearly two hours scouring their property finding the little guy. I told her that I would be there in about twenty minutes. She told that she would be waiting at the end of her driveway to lead me through the pasture out to where the beaver was trapped.

When I got there, I pulled around the corner and saw this small woman just pacing back and forth in front of a large truck; as soon as I pulled in the driveway, she ran up to my window and told me to jump in her truck because she didn't think that my car could make it through the field without getting stuck. The setting was a wooded hillside, slippery from rain the day before. I parked my car, grabbed my capture gloves, a couple of towels, and my transport crate and off we went. We drove through two fields over to her husband’s truck, where the beaver was trapped under a tree next to the river. 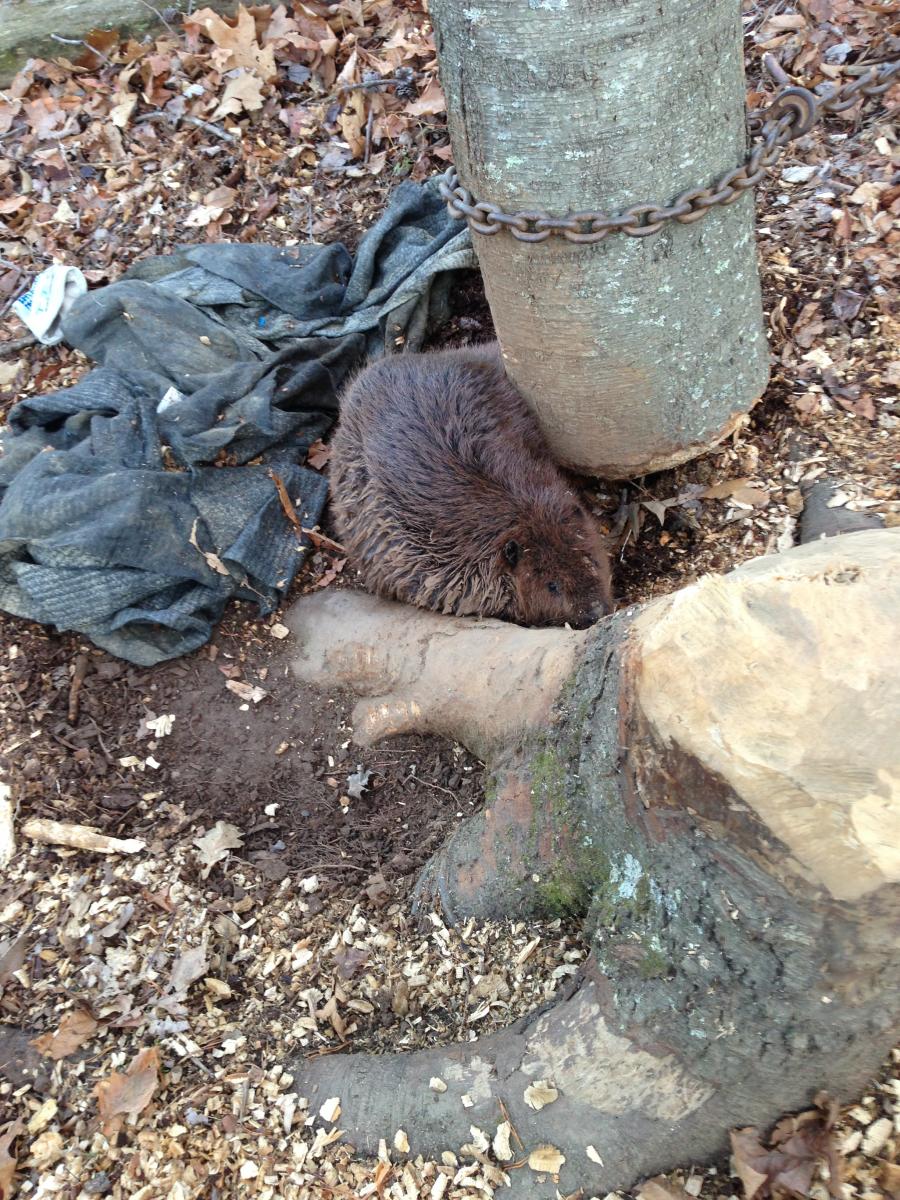 I climbed over a short barbed wire fence and got my first glimpse of what I was up against. First of all, the poor little guy was not so little – the beaver weighed about 45 pounds. Knowing how some beavers grow to nearly twice that weight, I was fairly lucky on that count. Somehow, as this beaver had chewed through a 50-foot tall tree; the tree had “fallen” and landed on the beaver’s tail! The tree was still standing up vertically, about a foot away from the stump and was directly on top of the beaver’s tail, pinning him to the ground.

The first thing I realized was that my transport crate was nowhere near large enough for this beaver. The second thing I realized was that I had no idea of how to get this beaver out from under the tree. I ended up going up the hill to the next farm over where a man was working with a tractor; I asked if he could come over and use the tractor to help us pull over this tree and free a beaver. He agreed, so I jumped up on the tractor and directed him to the fence. We ended up cutting a hole in the fence for the tractor to enter, and then ran a cable down to the tree. I hooked the cable onto the tree, the tractor driver threw the tractor into reverse, the cable went taut, and then ... nothing. Due to heavy rains the day before, the tractor couldn't get the traction on the steep incline to pull over the tree.

After an irritating fifteen minutes in which I sat on the ground and drew diagrams in the dirt, we finally came up with our best idea. We attached an additional cable to the tree and decided to try and lift the tree straight up with an agricultural jack that is designed to lift up tractors. Very slowly … the tree started to rise. I had one of the other rescuers manning the jack; after slowly lifting the tree a little more, I ran over to the beaver to try and dig the beaver’s tail out just a little more. We did this over and over again until we almost had the tail free.

I had the property owner bring my car as close as she could get it, because I realized I would just have to put the beaver in the trunk of my car. We got to the last moment before the beaver’s tail was free and I ran down the hill to get between the beaver and the water. One last click of the jack, and the beaver was free! Luckily, he didn’t realize it, so I was able to scurry up the hill and wrap him up in my coat and towels and quickly hustled him up the hill into my trunk.

All and all, it took about four-and-a-half, super-stressful hours. I drove the beaver back to the WCV in about half an hour, where he immediately went into the tender care of our extraordinary vet staff. I headed home for some much-needed sleep.

The next morning I headed into work as normal, eager for an update on my rescue. It turned out that even after being trapped for at least a day with nearly a ton of tree resting on his tail, the beaver required just a single suture and he was good to be released the next day.

This quick turnaround was very important, considering beaver’s lifestyle. Beavers mate for life and their offspring stick around for years and years before moving on. Some family groups exceed ten beavers. The males also have to teach all of the kids how to do everything from felling trees to building a dam, so by saving and releasing this adult male in such a timely fashion, we also helped the rest of his little beaver family.

I decided to tell this story because this is one of the parts of wildlife rehabilitation that I find the most satisfying. The knowledge that I saved this animal from a slow death by starvation, exposure, or predation is very meaningful to me; even when the animal has to be euthanized, I know that it is a far gentler and humane death then it would have faced in the wild. Even after more than 150 captures under my belt (all but two were birds of prey), I'm sure this is an experience that I will cherish for a long time. 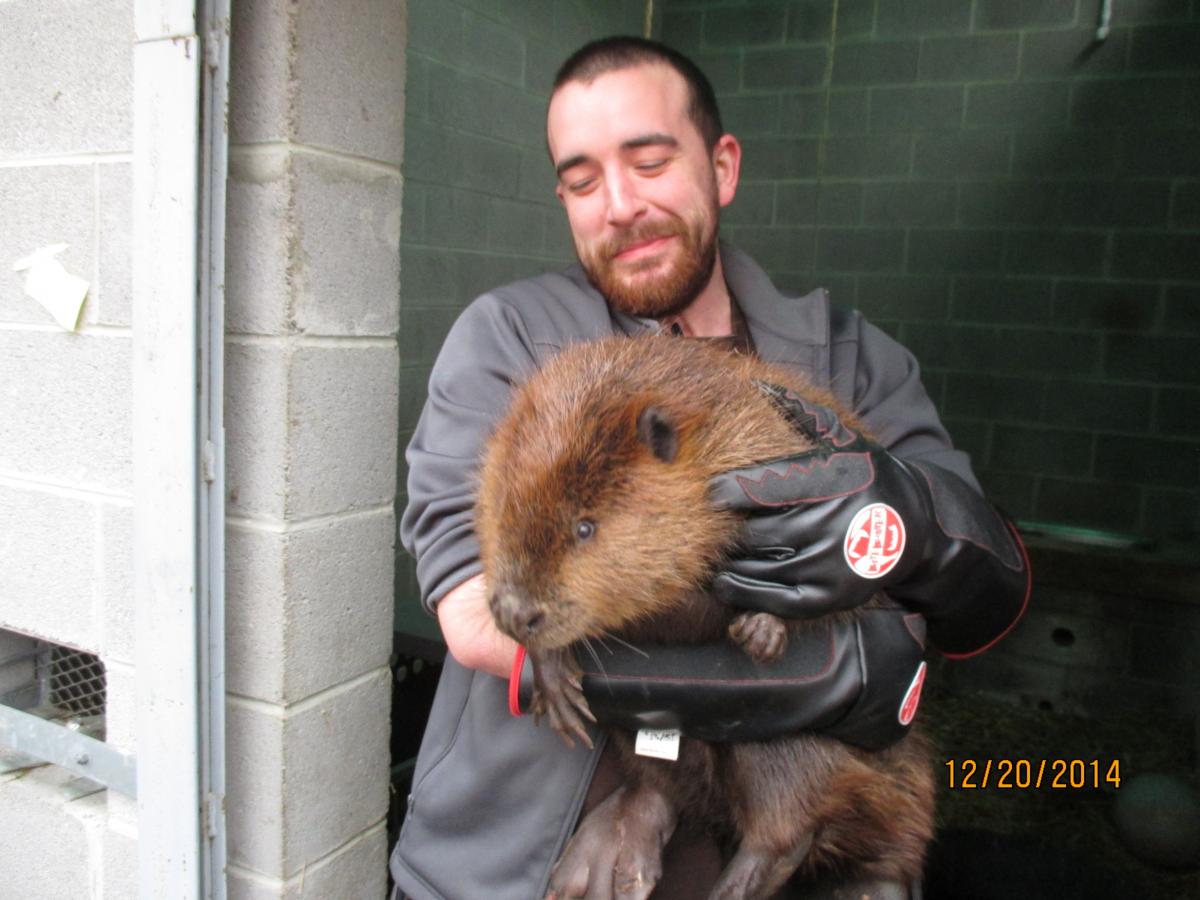 If this strikes a chord with any of you, I implore you to be a Wildlife Center transport volunteer so you can help transport (and possibly even capture) injured wildlife when finders are unable to help. You can find an application form on the Center's website. [Editors note: Being a transporter doesn’t require the skills of a beaver rescue; most of the time we simply need volunteer drivers! Learn more here.]