On October 16, the Wildlife Center of Virginia admitted an American Bittern. The patient was seen “falling out of the sky” on October 15 and the next day was transferred to the Center. Initial examinations showed no significant injuries, although the patient’s body condition wasn’t quite what we would like it to be and he couldn’t fly very well.

With most species that are admitted, the rehabilitation staff has a general idea of their husbandry needs because we often see those species. In the case of the American Bittern, it had been a few years since one had been admitted, so it was a good opportunity to do some research on bittern natural history and develop a plan of care. This husbandry plan would include housing and nutrition.

First, we had to decide where and how to house this bittern. Through our research we found American Bitterns live in freshwater marshes and wetlands with tall and thick vegetation. They use this vegetation to forage and hide in. The rehab staff knew that having this vegetation in the patient’s enclosure was a must to keep the bird less stressed.

To provide this environment for the patient, we had to be resourceful with our surroundings at the Center. This meant all of us going on the hunt for cattails and tall thick grasses. And guess what? We did it! We found a patch of tall grass and a few cattails, and another extern followed a stream until she found a jackpot of green ferns. We had exactly what we needed to give this bird a wetlands environment.

Additionally, we added an assortment of textures to the flooring, including a few different rubber mat substrates and Astroturf. We then provided areas for the patient to hide and feel safe -- a sheet hanging off of the wall and a dog house he could fit into. 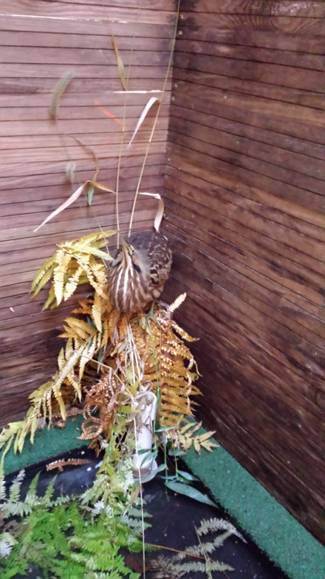 Looking further into Bittern natural history we found they are naturally solitary, so we housed him in an enclosure away from other patients. When we entered the bittern’s enclosure the next day, it took us about a minute to locate him -- I would say his enclosure was set up great!

Next, we had to decide what to feed this unusual bird! The first night we offered the Bittern a huge range of options to see what he liked to eat. This first meal included live meal worms, live goldfish, live red wiggler worms in a dirt pan, dead mice, and dead silverside fish. The Bittern definitely enjoyed the food during its stay here at the center; on one particular day it ate 119 live fish!

After a few days with plenty of rest and plenty of food, as well as a test flight, the American Bittern was deemed ready for release. When releasing any of our patients we have to again look at their natural history to find a suitable home and location. For this patient, we needed to find wetlands! After some looking, we found an appropriate wetland habitat and had an extremely successful and fulfilling release of our American Bittern!