It’s time to look back on 2022! Check our blog between Christmas and New Year’s for a variety of stories and memories of 2022 from the staff and volunteers of the Wildlife Center of Virginia.

Normally, out of the thousands of animals that come through the Center's doors each year, we might only add one to the Center's team of education ambassadors. Often, we don't add any. We frequently get asked why we can't take on more, and while we wish we were able to, the answer's not that simple. There is a lot of criteria we need to meet for an animal to become an education ambassador. We need to make sure that we have the space to house it, the knowledge to care for it, the staffing and time required, and most importantly, that the animal can become comfortable in human care. It's not often that we add new faces to the team, and that's why, this year, what stands out most for me is that we added not one, not two, but three new ambassadors to our team.

Clover the American Kestrel was the first new ambassador to join the team this year. She came to the Center after attempting to fly to people at a gas station in Staunton and someone swatted her to the ground. On admission, we found a silver band on her leg, and after reporting the band number online, we learned her backstory: Clover was taken from her nest by falconers at only 16 days old, and later released into the wild. They did this because they wanted to help Clover survive her first winter, a period of high mortality for young birds. Sadly, they made a big mistake: they took her at such a young age that she imprinted on people and didn't know how to survive on her own. She was only flying to people because she was hungry and wanted companionship.

Luckily, even though Clover wasn't equipped to return to the wild, she was equipped to make an excellent education ambassador. It didn't take her long to get used to her new home, and by spring we had already built up enough trust for me to take her out on the glove. Most birds take a while to get used to the sights, noises, and unexpected things that come with going outside their enclosure, but not Clover. She took to it immediately and had a strong curiosity to meet people and see new things. In fact, it has become a regular part of our routine to go for daily walks around the Center. I always look forward to our strolls. 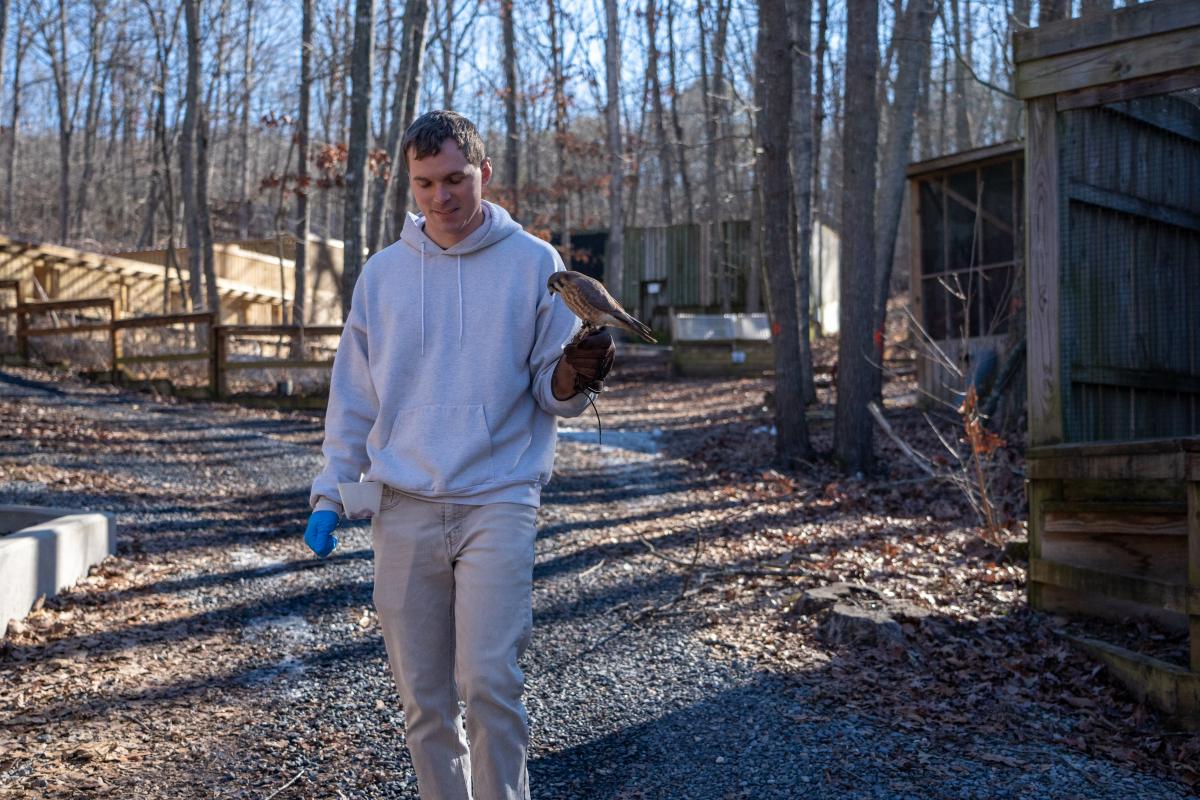 Fast forward to now, Clover is fully trained and ready for programs, we're just waiting for the USFWS to add her to our permits so her role on the ambassador team is official. In the meantime, Clover has been spending many of her days coming into the outreach room and sitting on a perch by my desk, from which she likes to watch the going-ons of the Center. We like to joke that Clover supervises us and makes sure we're getting our work done. 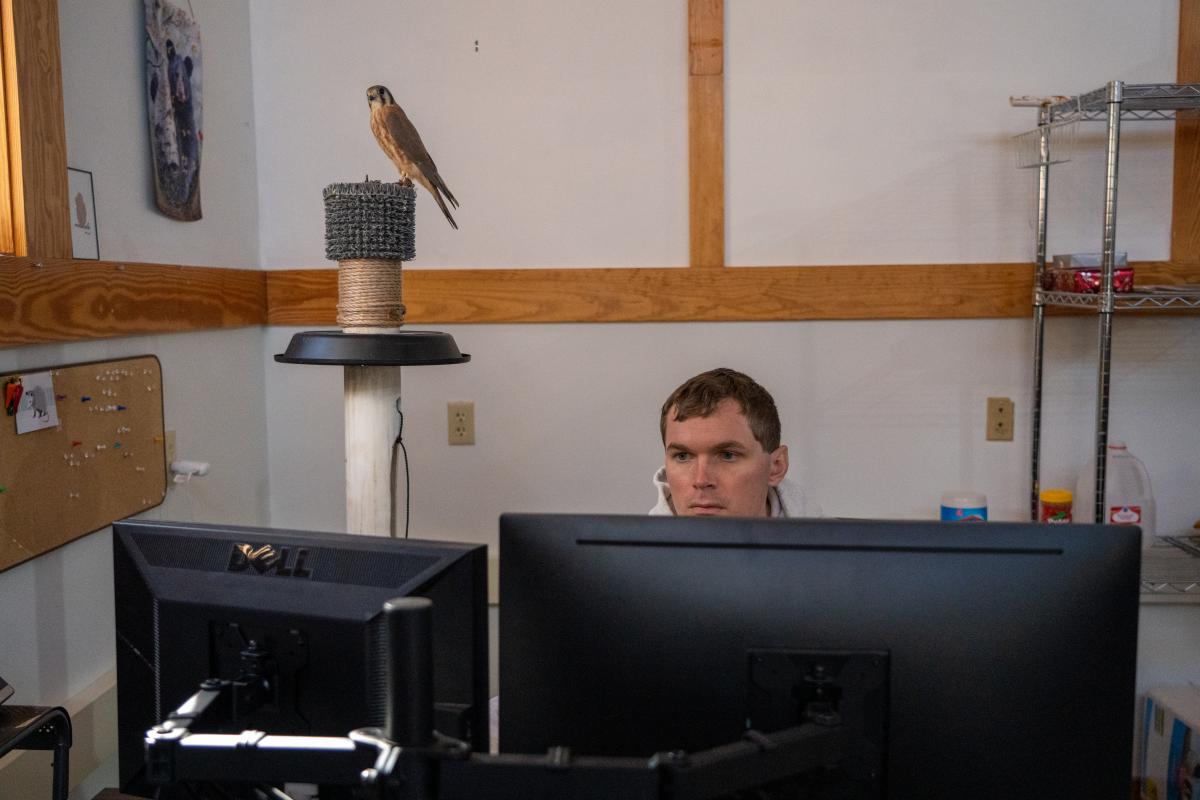 Not long after Clover joined the team, Dr. Karra informed us about a new patient at the Center: Virginia Opossum #22-0690. The young opossum, weighing in at just 131 grams, had been caught and injured by an outdoor cat. Though he survived the attack, his right eye was severely damaged and needed to be removed. He could no longer live a life in the wild. Generally, this ends in euthanasia, but Dr. Karra felt he might do well as an ambassador if we were interested. Our two opossums ambassadors Violet & Marigold were becoming geriatric, so we decided it was a good time to add to the team.

Alex and I started working with the opossum in early spring and our first impression was that he was a little spitfire. Every time he'd see us, he'd open up his mouth wide to try to intimidate us, which was honestly somewhat amusing considering his size. But once he learned that we always brought him his food (his favorites were mice bits and apples) and that we never did anything to harm him, he started to warm up to us. During the next two months, we got to witness a lot of "firsts" as he grew up: his first time climbing, his first bath, and my favorite, his first time trusting us enough to take food from our gloves. 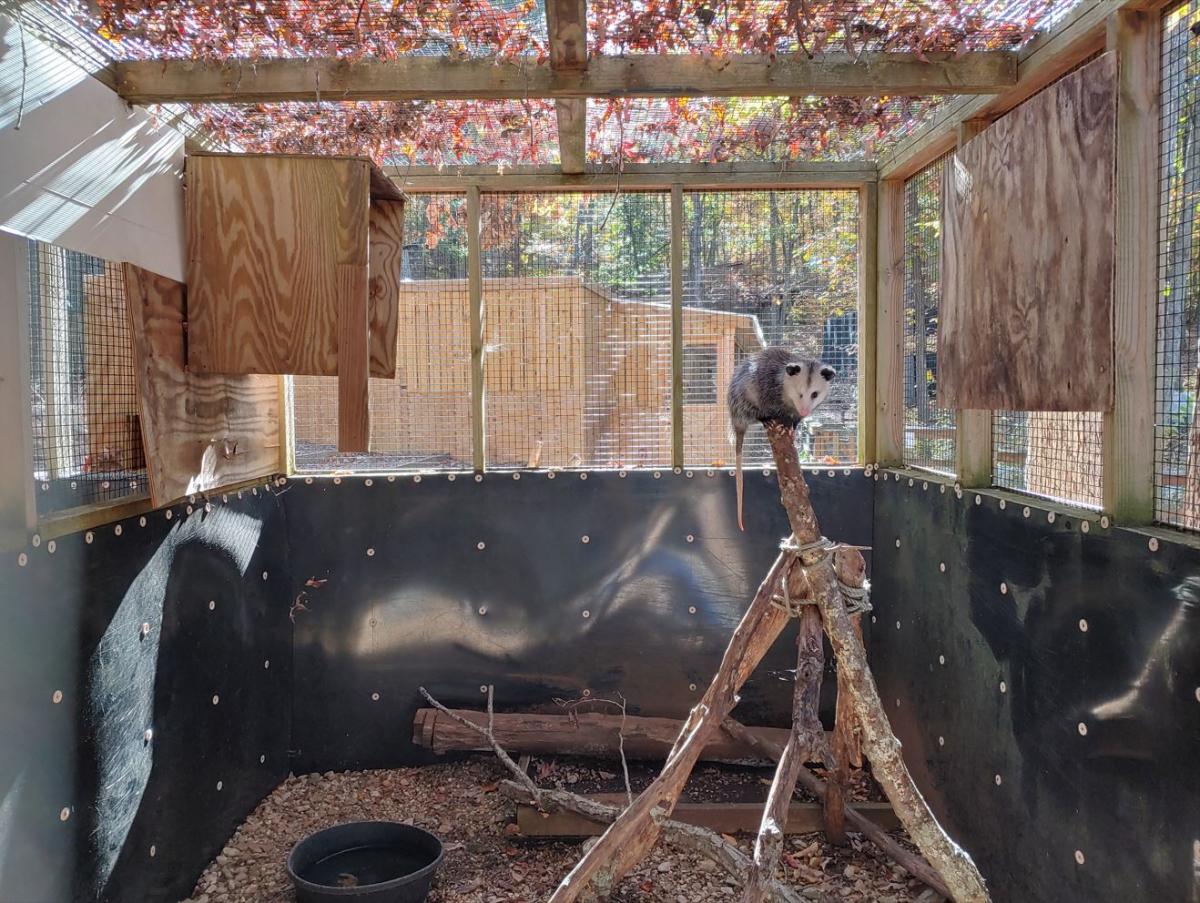 The 131g opossum we used to know is now bigger than Violet and weighs 2.33kg (about 5.1 pounds). And he has a name ... Oliver! Outreach docent volunteer Lydia Price won his naming rights at our Annual Gala and gave him the name Oliver because it "derives from the olive tree, which has been said to symbolize peace." It's the perfect name. Oliver is special to me, not only because of his wonderful personality but because he's the first opossum I've helped raise at the Center. He's also the Center's first-ever cat-attack victim who has become an ambassador. 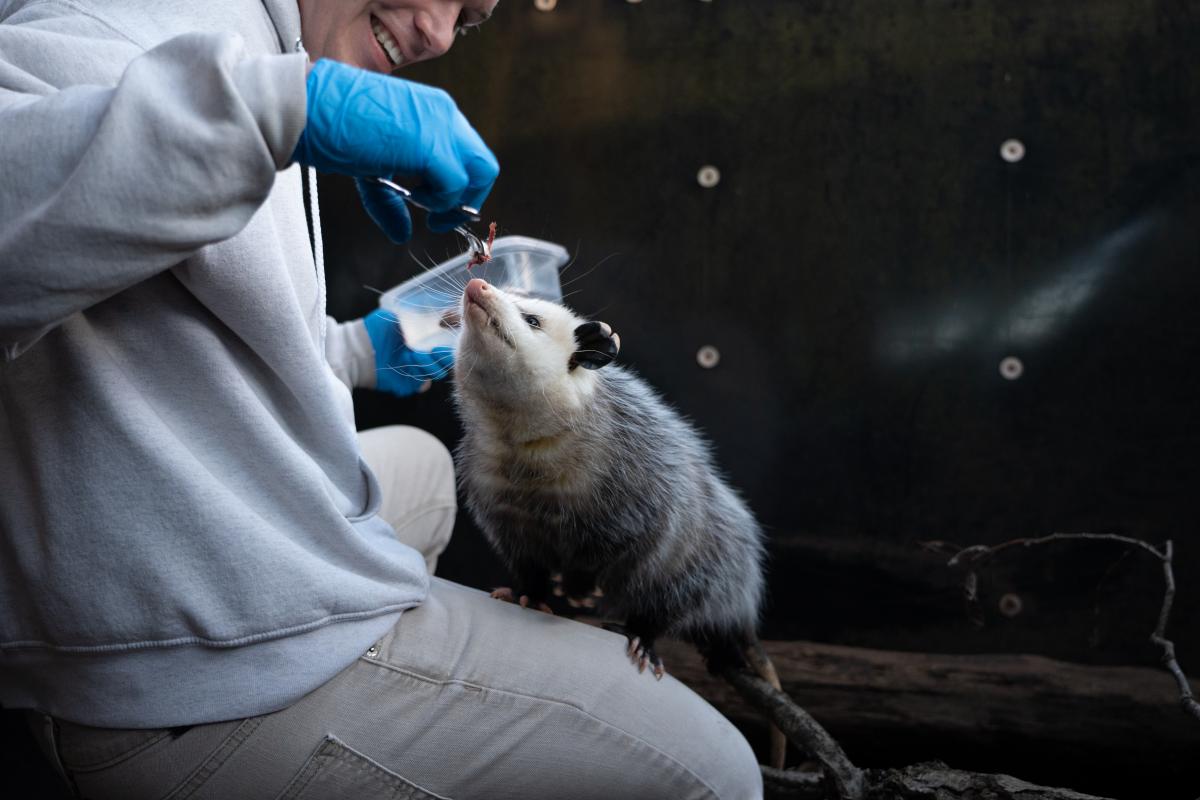 The third and final ambassador we added to our team was a ratsnake that came to the Center almost a year ago. The snake was brought to the Center after being kept as a pet for an unknown period of time. Needless to say, the snake was very comfortable around people, so we started reaching out to other organizations that might want to have him as an ambassador. Sadly, during that time, our education ratsnake Albus's health took a downward turn, and we had to euthanize him. Though we were very saddened to lose our long-time snake friend, we realized that the ratsnake we had been trying to find a home for could stay at our Center and take on Albus's mantle of teaching the world about these misunderstood animals. 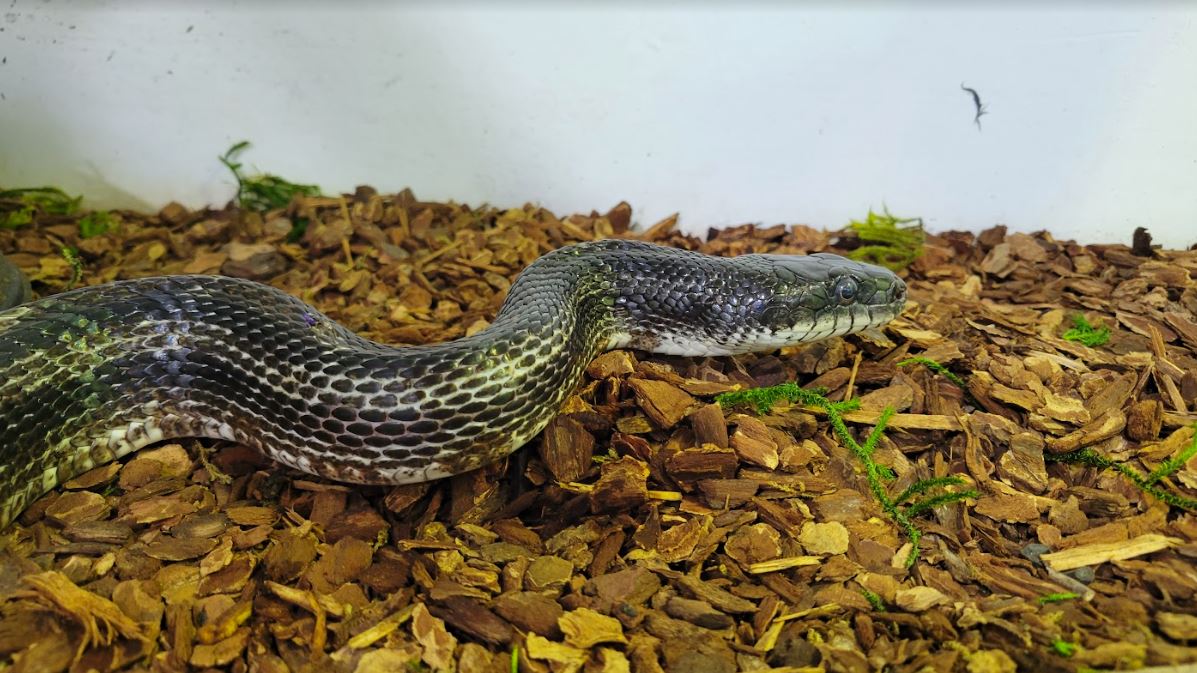 What was most fun about having this ratsnake join our team was the naming process – we enlisted the help of the public in naming him! I had so much fun reading through the more than 100 submissions, but it didn't take long to narrow it down to one name: Allegheny, an ode to both his species (their Latin name is Pantherophis alleghaniensis) and the habitat where they can be found. The best part was a week later when Allegheny and I visited one of the schools that participated in the naming contest. He was a big hit! And admittedly, Allegheny was so curious and active during the program that I had a hard time keeping him still long enough for the students to get a good look at him. At one point he even wrapped around my microphone and unplugged the cord. The kids absolutely loved it and burst out laughing. I had a good laugh too.

Getting to know each of these animals' personalities, quirks, likes, and dislikes has been the best part of my year. They truly bring a smile to my face even on my worst days. I can only hope to make as much of a difference in their lives as they have already made in mine.

I can't wait to see Clover, Oliver, and Allegheny flourish in the new year. Keep an eye on our event calendar, because we might just be heading to a program near you. And trust me, you don't want to miss the opportunity to meet them.

P.S. You might say we added four ambassadors to the team if you include Ozzy the Eastern Screech Owl. Though he came to the Center early last year, it was this year that Amanda has made the most significant strides in his training. We've submitted an application to add him to our permits, but the process is taking quite a while. That will be the last step before he's officially an ambassador. Keep an eye out for updates on him in the future!