Eyes open. October 8th, 2020. I didn’t want this day to come. Twelve hours from now it will all be over and I will be left not exactly knowing what I am waking up for. For the last three months that hadn’t been a problem. The fawns needed browse, the box turtles needed to be taken out to soak, the raptors needed to be exercised - staying in bed wasn’t an option. The patients were counting on me. But tomorrow? Tomorrow, my externship in Wildlife Rehabilitation at the Wildlife Center of Virginia will be over. The baby squirrels in ICU will still need formula, the bears will still need more than 150 pounds of food weighed out for them, and Papa G'Ho will still need his joint supplement. But someone else will do that work. It won’t be me.

Deep breath. It’s ok.  What an unexpected adventure it was. An unforgettable one. Yes, soon the experiences you had will move to the plane of memories, but is that something to regret? Something to mourn? Just think about how proud your eight-year-old self would be to see you. God, he would beam, he wouldn’t believe it. He would tell you to be happy. He would tell you to enjoy these final moments. Ok. Here we go. One more day.

I wish I could tell you I remember the details of that day. I am sure there were moments that I felt lucky and so full of joy. I am also sure that there were moments where I thought about how I wouldn’t miss this (probably when mopping). I do remember saying goodbye to people and thinking about how much I would miss them. The end of the workday came and I watched them all depart as I headed into the rehabilitation office for my exit interview.

It isn’t a painful process. Kelsey and Shannon, who had welcomed me and taught me so much over the past three months, give me valuable and frank feedback on the work that I have done. They applaud my successes and point out areas where I still need to grow. I remind them that they will be hearing from me again soon in the form of an application for the year-long Rehabilitation Internship. At some point, Shannon leaves. It is more than fair. Twelve-hour shifts are no easy breezy hair flip. I won’t miss the exhaustion.

Out the window, Kelsey and I catch the glare of headlights. The Center is closed. But someone is here. Kelsey goes out to check on the situation. I wait. She comes back with a box.

The specifics of how exactly these final moments played out have escaped into the darkness of the past that exists outside of that aforementioned plane of memory. I suppose they didn’t matter to me. What mattered to me and what I do remember quite vividly was that there was a Virginia Opossum in the box, resting in a blood-spattered sweatshirt. It, like many patients we see at the Wildlife Center, had been hit by a car. The resulting injuries were significant and I particularly noted a bulging and blood-filled eyeball. I had seen patients like this be admitted before. The prognosis for them was generally grave.

As I looked down at the poor, broken-looking creature, I felt the future exist in the present. The future of the Wildlife Center was there, in that box. To me, that opossum was not just itself but a representation of every patient that would arrive from that moment to an ending indeterminate. As long as wildlife was in need and there were passionate and talented people to help them, the Center would remain. The dam would hold. I had helped. But now it was time for me to go. Wherever this opossum’s journey was leading, I would not be a part of it. I stepped away from the box, wished Kelsey good luck, and left, passing Dr. Karra as she arrived back at the Center to evaluate the opossum.

February 6th, 2021. I’m back. Because this isn’t a story about endings or saying goodbye; it is a story about coming home. I got the internship. As I type that, it feels surreal. Every time that I leave the Center and use my key to lock the door behind me, a moment of awe washes over me. I can’t believe that my life brought me here. I am so grateful that the goodbyes I said back in October were not forever and I feel so privileged to work once again with such an amazing group of people and such an awe-inspiring array of patients. But on this day, I am going to see one animal in particular.

I carry in my hand a small bowl filled with a premade mixture of canned dog food and finely chopped fruits and veggies, half a hard-boiled egg, and a mouse perched on top. I put on a hefty pair of protective gloves and open the door to the enclosure. I put the food down, refill the water dish, and out she comes, no longer bloody, no longer in a box. The opossum that I left behind on that night in early October waddles over to me, places her small front hand on my boot, and looks up. 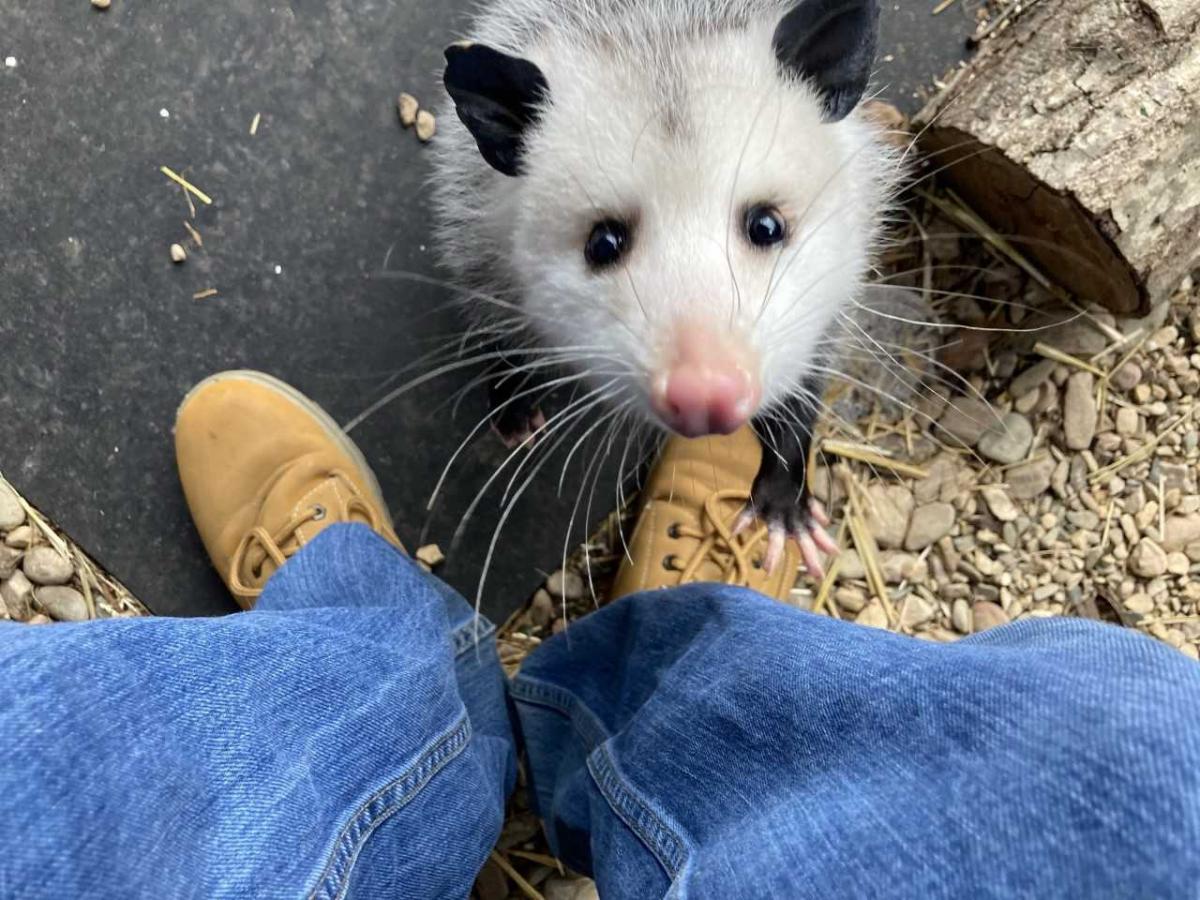 It is hard to know what she sees. The accident left her blind in her right eye, and with only limited vision in her left, which meant that she was not able to be released. But the Center gave her a second chance and she joined the ranks of the Center’s educational animal ambassadors. We are alike in that way because I too was given a second chance by this very special place. I didn’t get a degree in biology. I still struggle to remember the meanings of tibiotarsal, dorsal, proximal, medical term x, medical term y. I still don’t understand how x-rays work (magic?). But I do have a passion to help these animals and I do have a voracious appetite to learn more. I do belong here. So does Marigold, the opossum now standing at my feet. And as I looked down at my new coworker, the future for us seemed endless, defined by new possibilities. Our story didn’t end that night. It carries on, echoing into the vast space between where we stand now and the future yet to be experienced. Onward.