Get Involved and Save Some Turtles!

An international crime spree is being committed, one which is estimated to be worth anywhere from 7-23 billion dollars annually. This crime is happening everywhere, from Brazil to Thailand, Tanzania to Turkey, and yes, even right here in Virginia. The crime in question: the illegal trade in wildlife. This illegal trade is one of the most costly illegal activities in the world, moving living animals, and parts of deceased ones, across a global network of organized crime. Illegal harvesting of rhino horn and elephant tusks has made international news, as has shark-finning and, more recently, the Pangolin trade. However, these are not issues happening just in far-off lands. In fact, a concerning trend is threatening one of this region’s most beloved species: The Woodland Box Turtle. 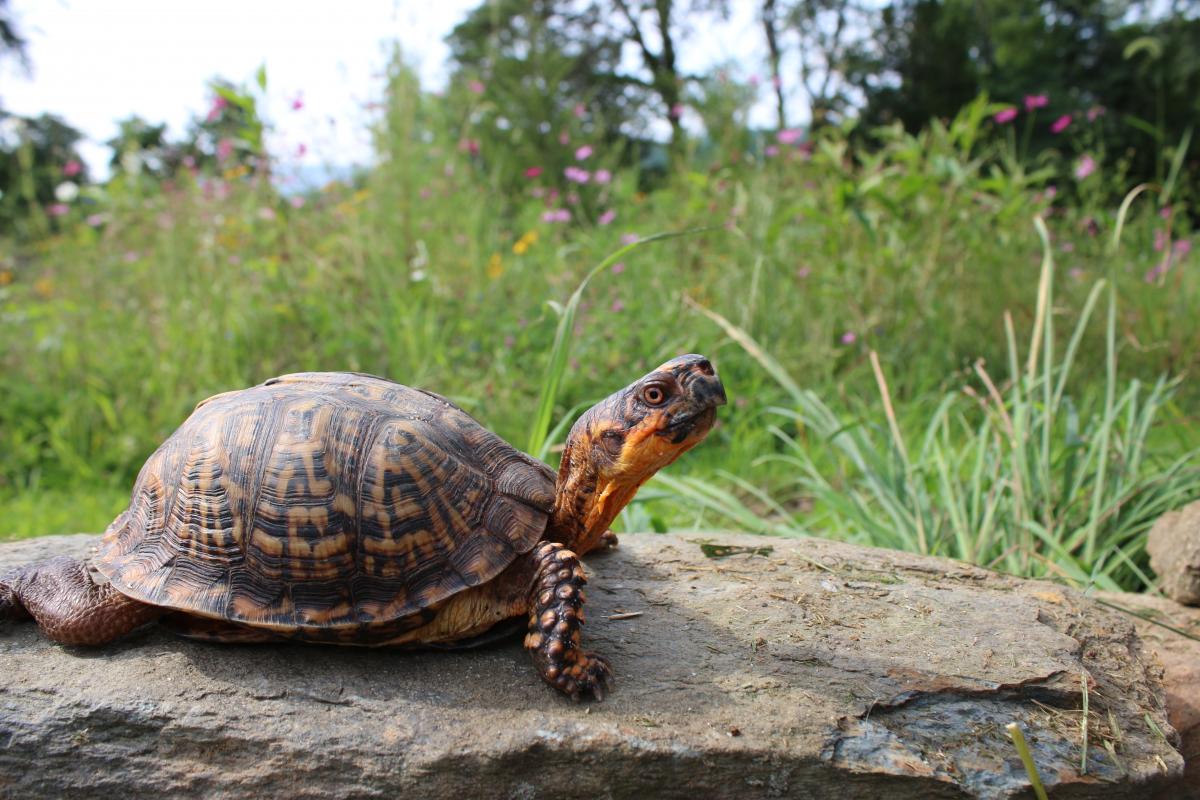 Although Box Turtles may seem to be a widespread and commonplace species of reptile, they are coveted for their beautiful coloration and unique patterns.   They are in demand as living pets, but their shells and other body parts are used for everything from cheap souvenirs to traditional medicines.  Box Turtles, both living and dead, have been known to fetch a hefty price in some markets, and the demand from consumers drives the need for a supply. In parts of the Eastern United States, authorities have found illegal capture and transportation of thousands of these turtles, as well as various other turtle species. There is evidence that these illegal activities are happening in the Commonwealth as well.

In order to combat this illegal activity, The Virginia Department of Wildlife Resources has recently proposed amendments to existing regulations, which if adopted, would limit the number of reptiles and amphibians an individual can possess, and completely prohibit the collection of reptiles and amphibians on all state and federal land without an appropriate permit.  These measures are intended to protect Species of Greatest Conservation Need from collection for any reason. These recommendations will protect reptiles and amphibians, including the Box Turtle, from the pressures of legal and illegal harvest, and make it much more difficult to capture and transport these species for sale in the global marketplace.

The Wildlife Center of Virginia wholeheartedly supports this proposal, and we hope that you will join us in submitting your comments in favor of this change. If you would like to learn more, visit DWR’s website to read their statement concerning the amendments. An important aspect of any proposed policy is public input, and that window is open, now through May 10, when the comment period ends. Every comment submitted will be read and considered as part of this regulatory process.  Comments can be submitted here (Look for VAC 4VAC15-360-10 "Fish: Aquatic Invertebrates, Amphibians, Reptiles, and Nongame Fish. Taking aquatic invertebrates, amphibians, reptiles and nongame fish for personal use" under Wildlife Diversity Regulations).

WCV President and Co-Founder Ed Clark has already submitted his comments in approval of the proposal, saying:

Positive impacts of the proposal:

“In 1989, by request of the Wildlife Center of Virginia (with behind-the-scenes support from DGIF), Delegate George Grayson introduced a bill that changed the wording of the section of Code which previously stated that there was ‘a continuous open season’ on all wildlife not designated as game, fur-bearing, federally protected, or threatened & endangered species.  The new wording reversed this to state that all wildlife was protected unless allowed to be taken by specific designation as game, fur-bearer, or nuisance species, by the establishment of a specific harvest season, or by permit from the agency.  This created Virginia's non-game program.  The five-individual, private possession allowance was a concession to people who had wild pets, particularly box turtles and snakes, and who claimed that DGIF was turning them into criminals.   It was a mistake to simply allow possession of so many individuals then, and the elimination of this allowance is long overdue!!   I applaud DWR for proposing these changes, and enthusiastically encourage their adoption!”

“There will be no negative impacts of this proposal, especially not on the wildlife resources the Department is charged with protecting.”

“Measures, such as this proposal, which acknowledge that individual animals matter in the effort to protect populations, are a very positive step, which reflects a very positive change in attitude and perspective within DWR.   As the agency continues to move away from the myopic "hook and bullet" focus it manifested for most of its existence, and toward a comprehensive conservation stance, it better serves the wildlife and the citizens of Virginia.  Congratulations on this proposal and the very positive movement in becoming the wildlife agency for all Virginians, not just those of us who hunt and fish.”

Again, we do hope that you take action to help us push for this proposal’s adoption. Every voice in favor of the proposal is another voice standing against the illegal trade of wildlife as well as protecting our ecosystems, and every animal’s right to live within them undisturbed.