It’s time to look back on 2021! Check our blog between Christmas and New Year’s for a variety of stories and memories of 2021 from the staff and volunteers of the Wildlife Center of Virginia.

I have only been at the Wildlife Center for about three months, but in a short time, I have been able to share experiences with so many new species that I have never worked with before. A new species for me, in particular, are Black Bears. Our five Black Bear cubs had long since moved outside in the Bear Complex by the time I arrived, so they are completely hands-off in terms of care, but we still go up to their yard twice a day to feed them. We try to keep the bear yards as natural as possible, which allows many other species to enjoy the vegetation and spend time amongst the bears. In my daily trips up there, I have seen other animals exploring the yard for leftover food scraps or just hanging out in the trees – wild visitors including vultures, squirrels, many passerines, and a very special opossum. I have seen this opossum making its way around the enclosure a few times, usually just minding its own business.

One morning in early December, I noticed the bears were very intrigued by something and as I got closer, I saw the opossum scurrying across the yard toward a tree. It quickly climbed the tree to escape, but with the cubs being as curious as they are, they surrounded the bottom of the tree, and cub #21-0545 (Double Lavender) felt bold enough to climb up the tree to get a closer look. 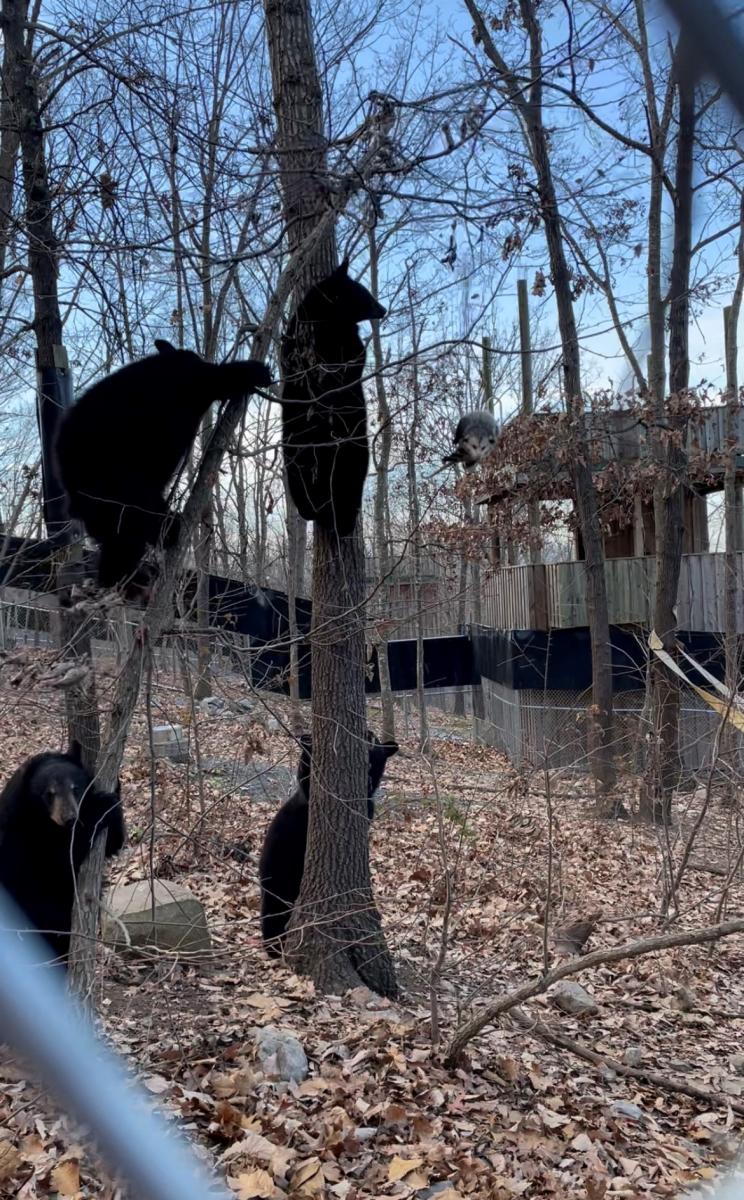 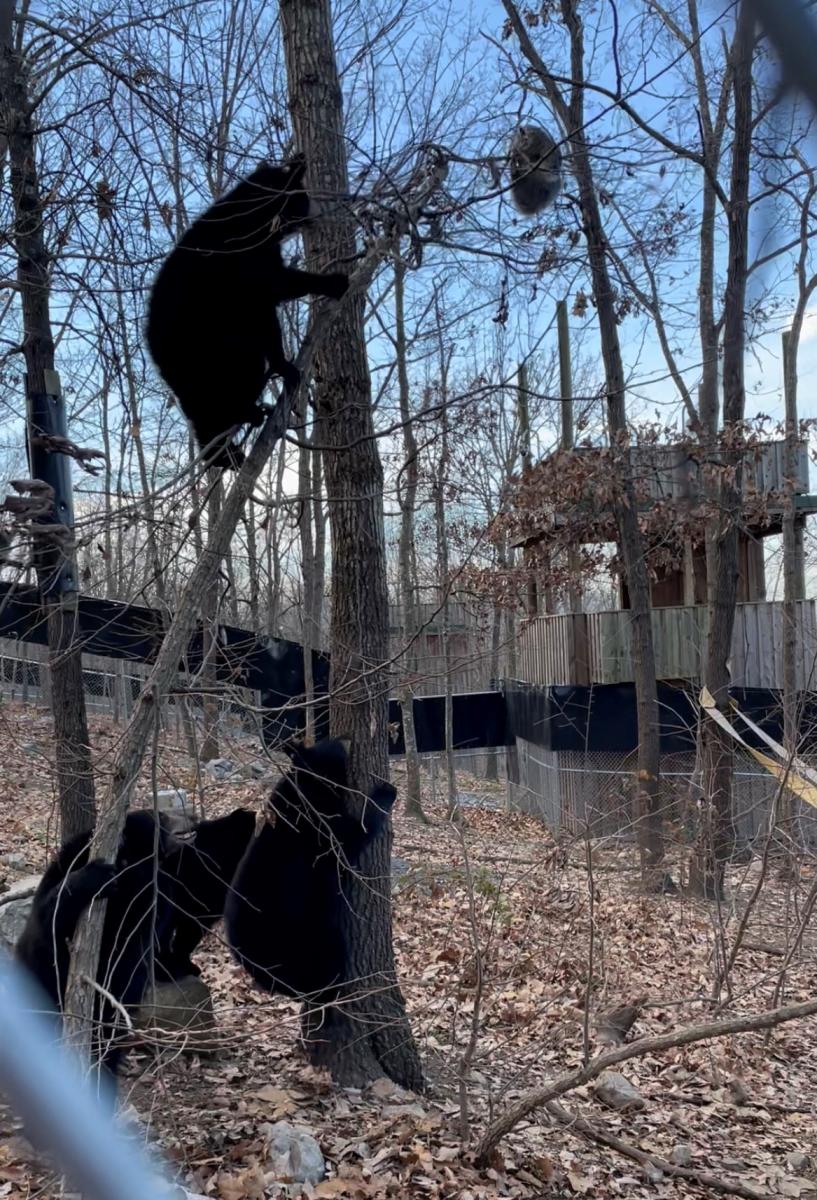 One incredible thing about bears is that somehow they manage to climb even the smallest trees, even though it seems impossible to support their weight. The opossum was holding on at the very end of this small tree, which began to bend and sway with the weight of Double Lavender. Each of her advances up the tree would shake the opossum, causing him to have to adjust his grip so as not to fall to the ground where the four other bears were anxiously waiting. 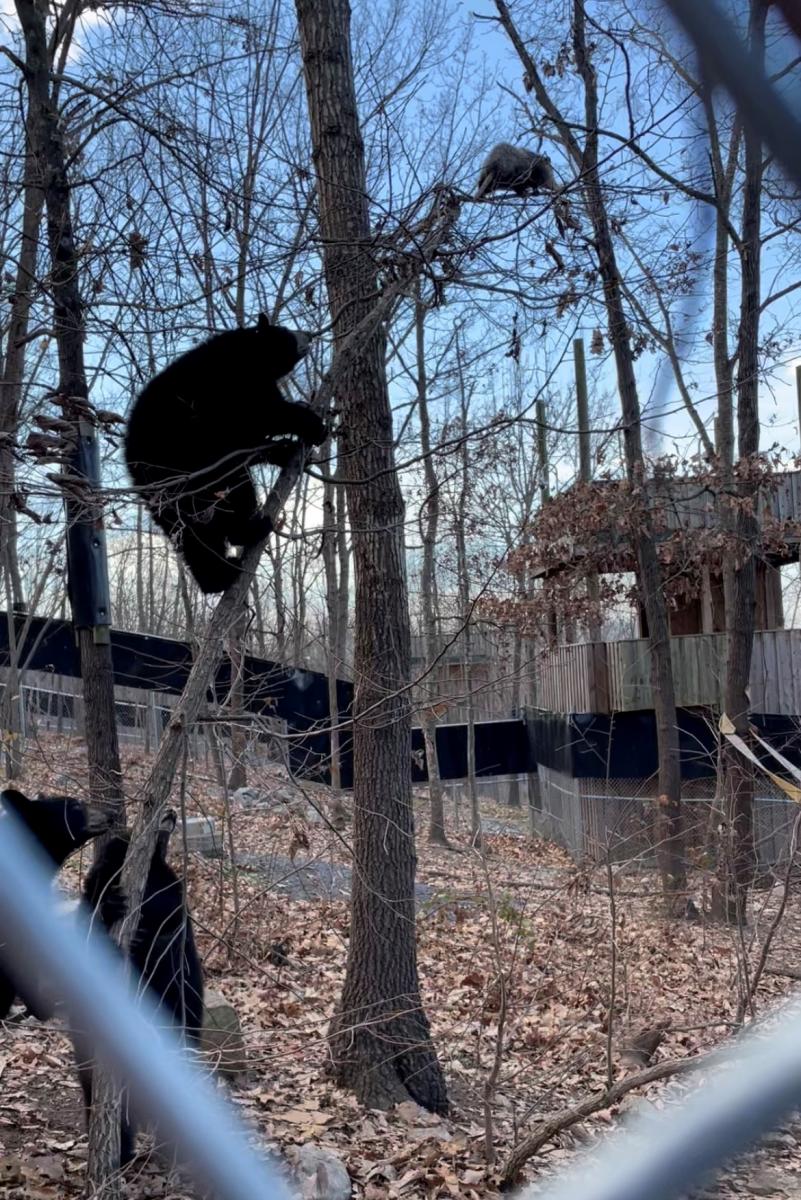 I stood on the outside of the fence, watching in fear as to what would happen next. Suddenly, I gasped as I saw the opossum finally lose his hold on the tree and fall to the ground. I think the bears were as shocked as I was because they just stood staring as the opossum stared back. After a few minutes of silence, in typical bear cub fashion, they wandered off to find something else to play with. The opossum was free to run off and hide in a tree cavity, safe at last. 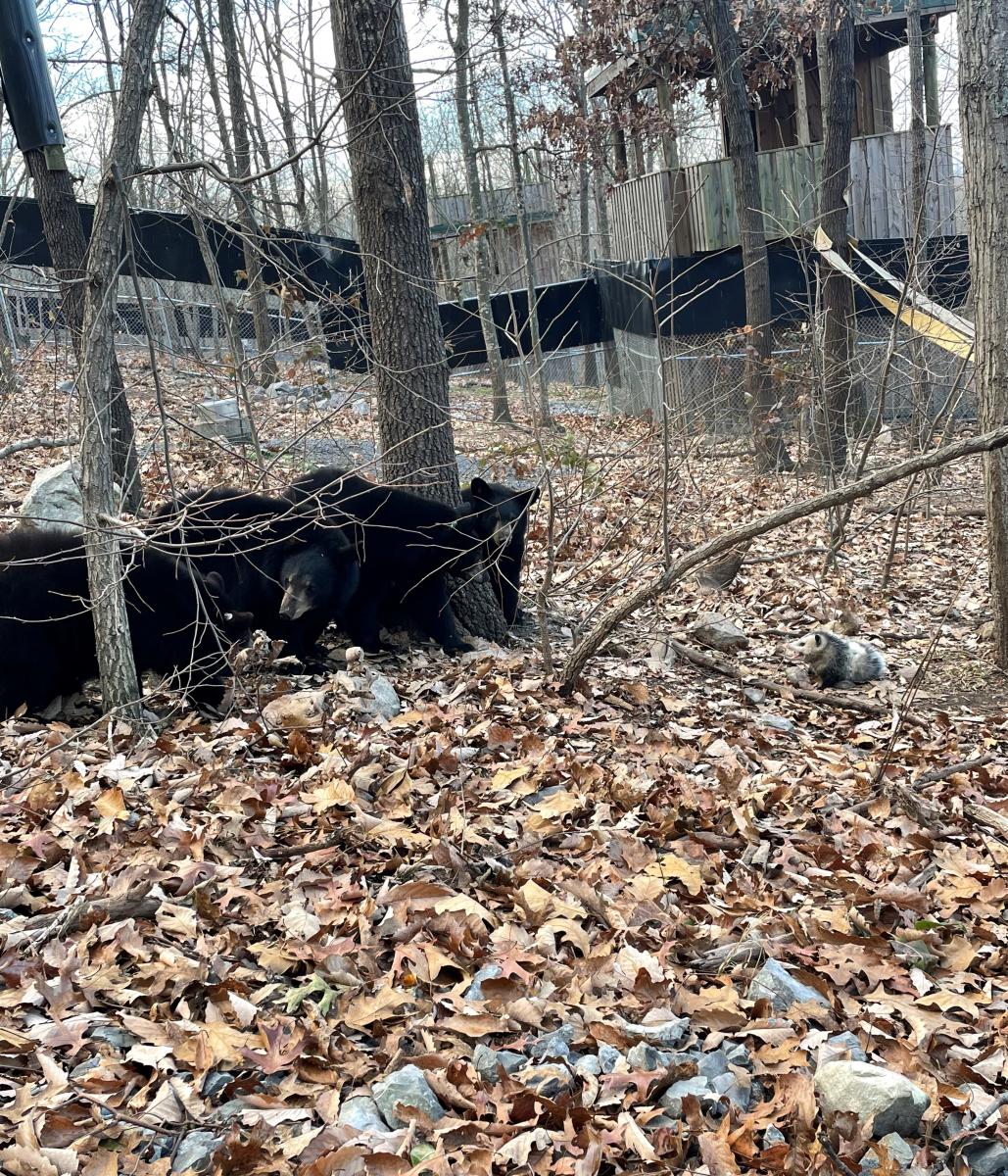 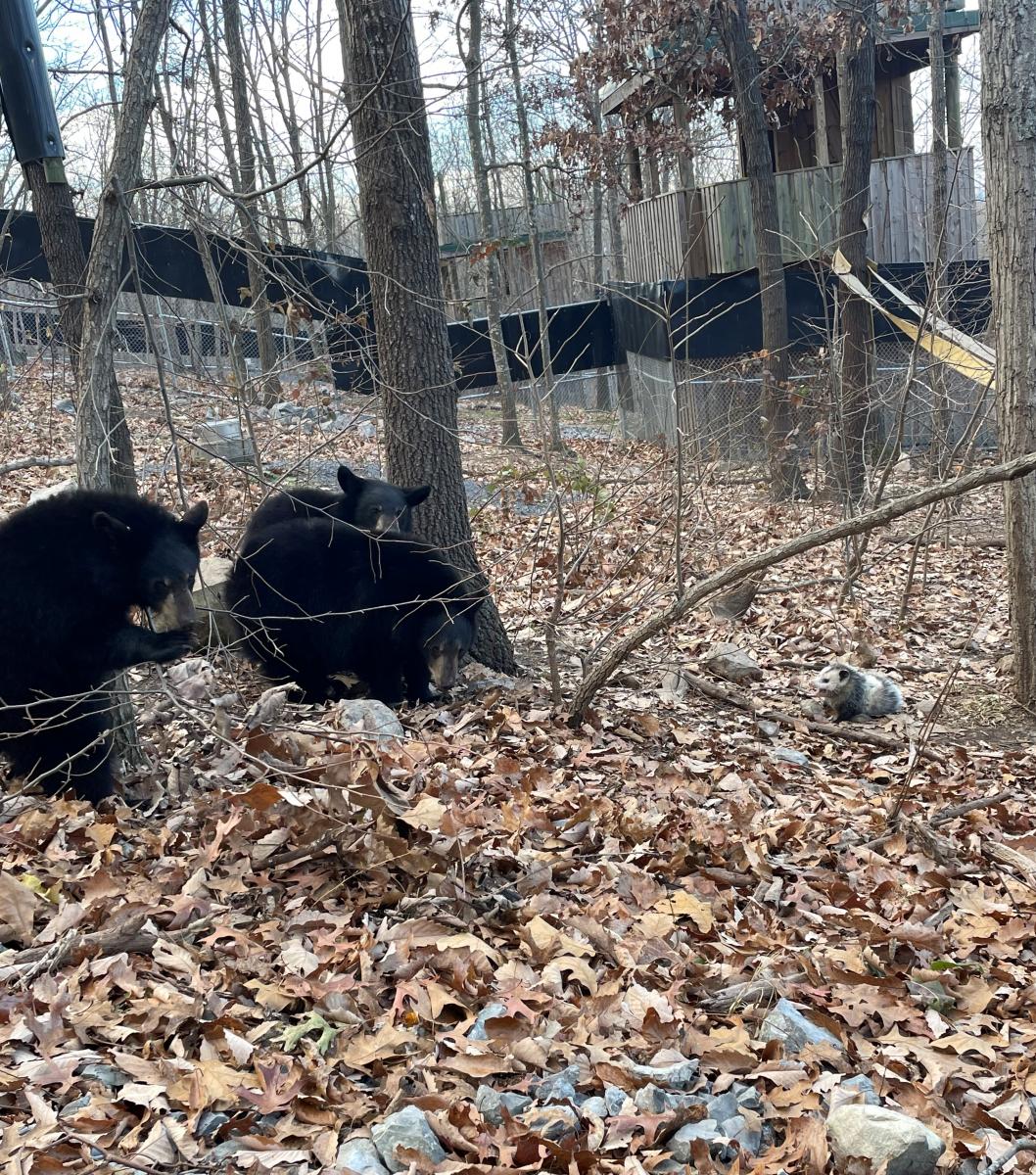 I have not seen the opossum since, but I expect he’s been a little stealthier when looking for food to avoid any more bear encounters. 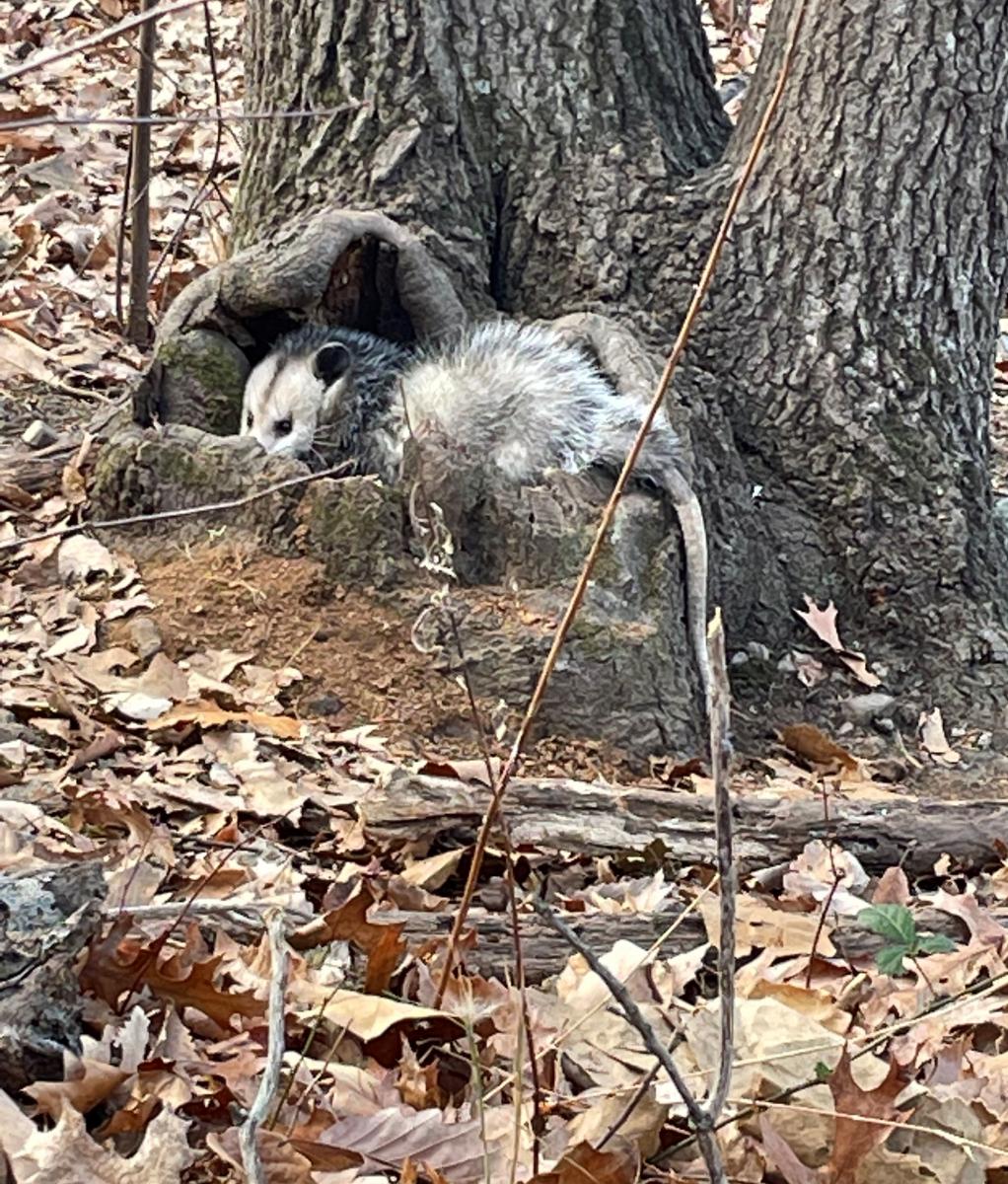