Last week, Genesis came into the library and said, "We just admitted a painted turtle ."  I perked up and said, "Oh yeah? That's an exciting patient!" (because painted turtles are cool!)  Genesis responded, "Sorry, I mean a turtle that has been painted."

Unfortunately, the Center sees more turtles with painted shells than you'd expect.  This one was decorated with shiny blue paint -- which appears to be spray paint. 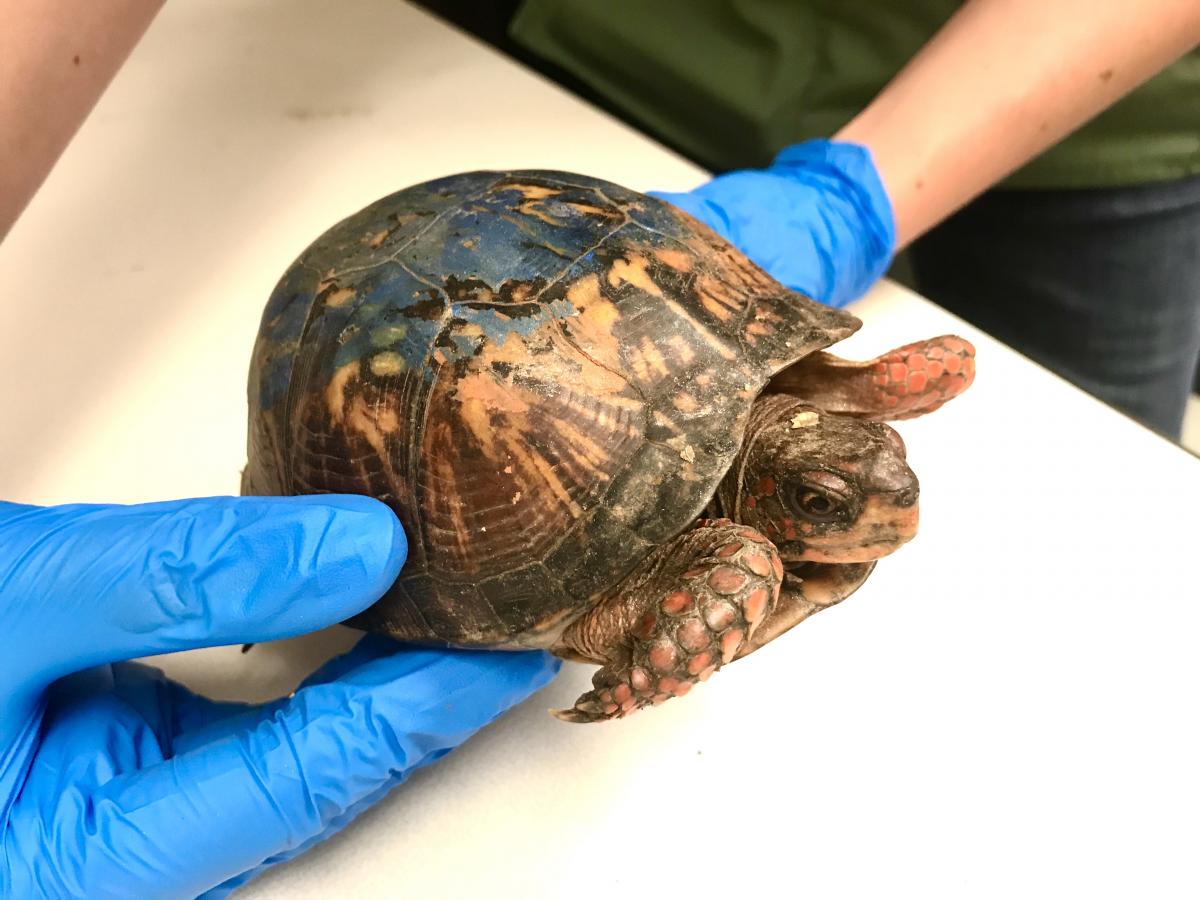 Admitting “painted turtles” is sad for us for a number of reasons, and an issue we feel very connected to.  Our two non-releasable education Woodland Box Turtles were originally admitted as patients with painted shells.  This kind of treatment of a wild animal isn't something that's preferable by any means, and here's why:

Painting a turtle's shell can be harmful to their health.  Often wildlife have very sensitive respiratory systems, and turtles are no exception.  The fumes from paints can be damaging to turtle's lungs and sinuses.

Would you paint your skin with permanent paint?  Probably not.  You wouldn't be able to soak up the rays of the sun, and you'd also stand out among other people.  The shell of a turtle is a living, growing part of its body, which means that covering it with paint can block vitamin-packed rays of light from reaching the shell.  A brightly “painted” turtle would also stick out like a sore thumb among its natural habitat.  Bright blue shiny paint isn't part of a turtle's natural color scheme.  Not only is that not fashion forward, it's also dangerous.  Turtles like Woodland Box Turtles don't have sharp teeth or big claws to defend themselves.  Their main defense is to remain unseen and unnoticed by using their amazing camouflage.  Cover that up, and they're likely to be noticed no matter where they hide.

It’s also disheartening when turtles like this come in, because this turtle was likely just doing its own thing in the wild and living successfully before someone decided to intervene and paint it.  Being picked up can be a terrifying experience for a wild animal. It’s not just the risk of secondary injuries likely caused by being painted an unnatural color —it also causes a great deal of stress..  Sadly, even the treatment for this can cause stress -- when turtles are admitted with painted shells, our veterinary staff have to painstakingly scrub all of that paint off -- a process that's likely very uncomfortable for the turtles.  A process that could have been avoided all together by simply leaving them alone.

Wildlife deserve to be wild.  Don't we disrupt their habitats and lives enough?  We should try our best to stay out of their way, and be kind to them whenever we can.  Painting a turtle might seem like a fun thing to do, but it's more often than not very detrimental to the animal -- and most importantly, it's not necessary.