His name was Harris

On March 14, a rabbit that had been attacked by a cat was admitted by a kind, private citizen from Harrisonburg.

I happened to be in the clinic, talking to one of the rehabilitators, when the rabbit arrived. Rayshaud, our veterinary technician intern, went into radiology to start the patient admission exam.  Instantly, Rayshaud’s gaze pointed toward me. As he held the box with this little rabbit in it, he realized the animal wasn’t a cottontail -- he was a domestic pet.  It looked so similar to a wild rabbit — I’m not surprised there was a mix-up! 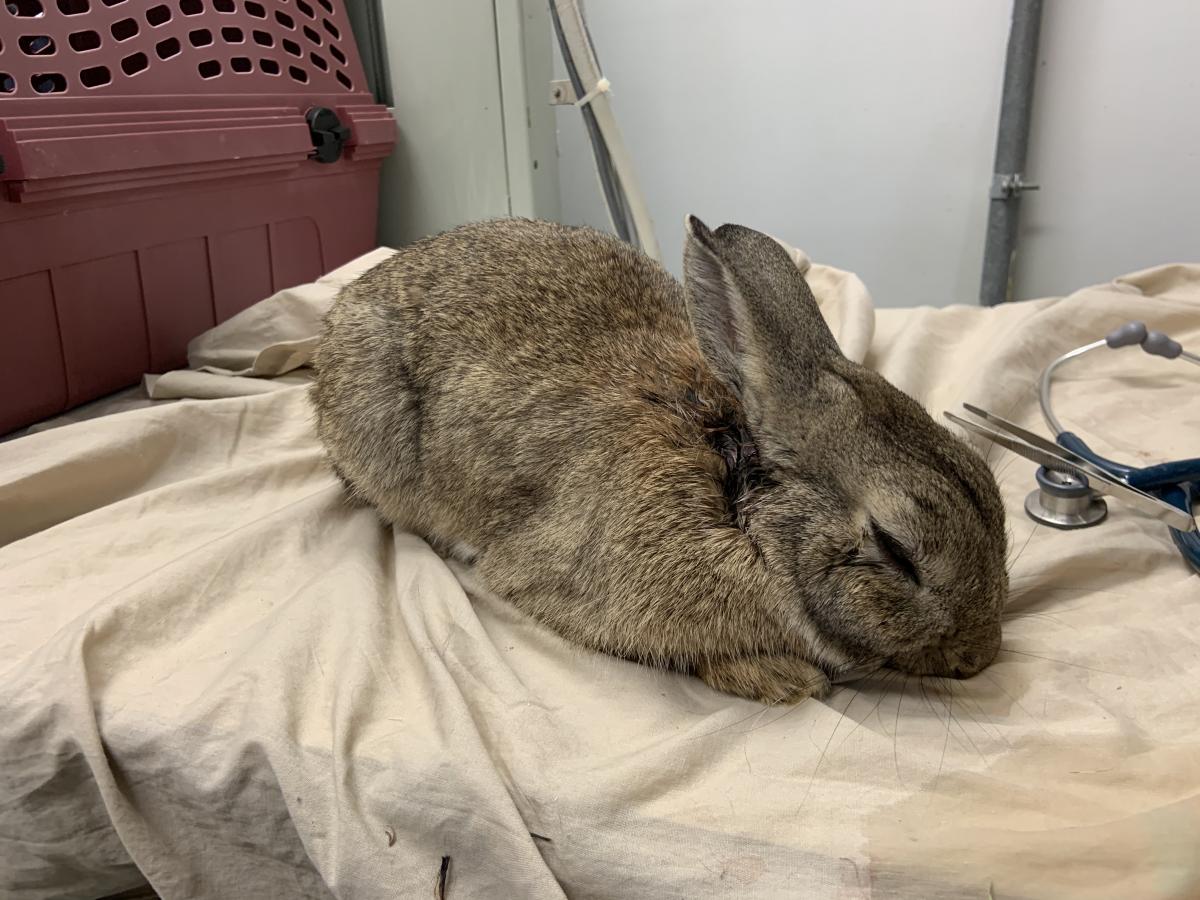 Some of you may know I have a pet rabbit — his name is Jimmie and he may very well be a dog in a rabbit’s body.  He’s personable, joyful, and will drool on you if you pet him for long enough.  Some of you may also know that one of my precious buns and Jimmie’s cage-mate, Caroline, suddenly passed while I was home in NJ for Thanksgiving this past year.  That experience was so gutting that I swore off ever having another rabbit. 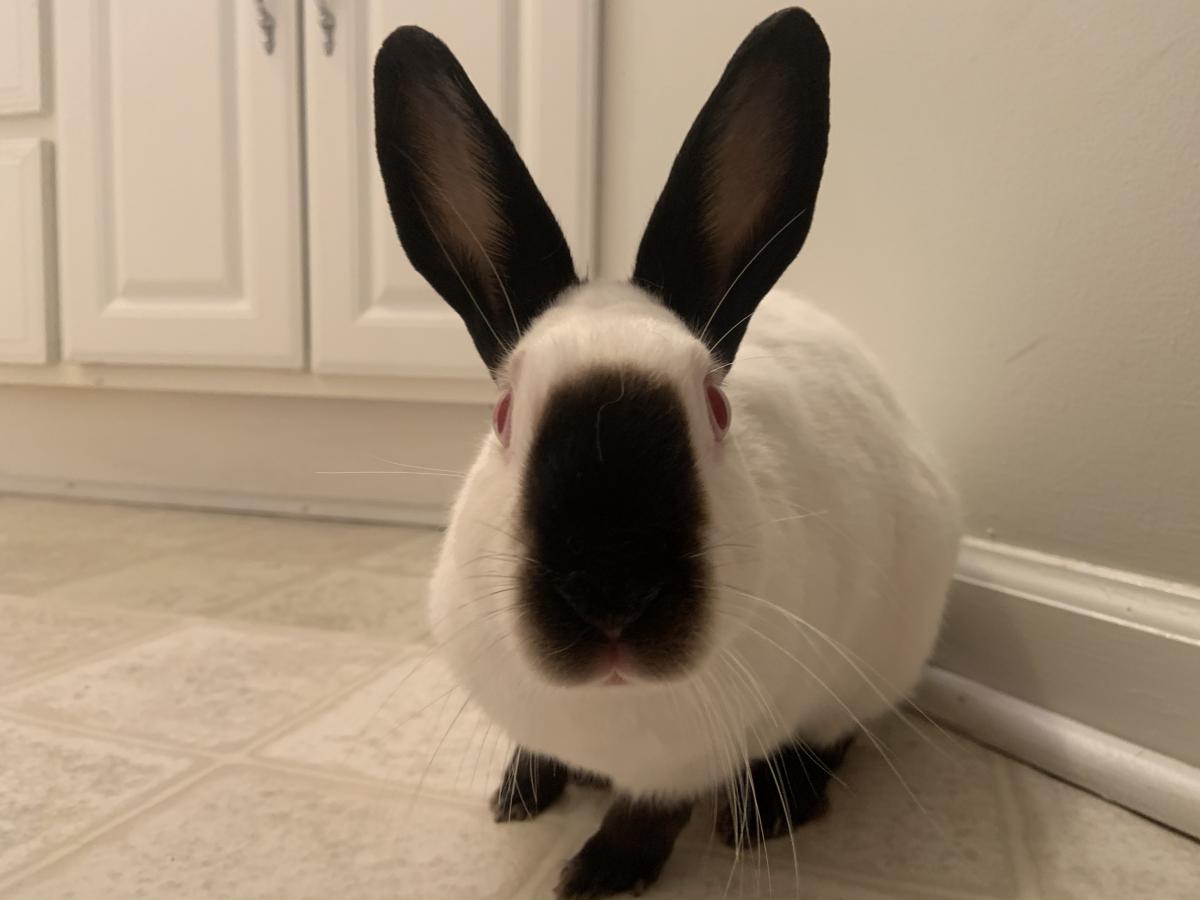 Pet rabbits (not unlike their wild counterparts) are very delicate creatures — they have flora in their gut that exists nowhere else on the planet.  Their care is very sensitive, and often, stress can make them decline rapidly without hope of mitigation.  If rabbits stop eating for even a short while, they can decline rapidly as their GI tract slowing down.  I’m very familiar with the fine-tuned care that they require, and also very familiar with the repercussions of them suddenly deciding they don’t prefer their food — thanks, Jimmie.  Often, you must literally jump to action to catch symptoms before they become larger problems.

Unfortunately, this little rabbit was likely in shock, and his cat-inflicted injuries were very serious.  In 2016, The Journal of Wildlife Management published an extensive 11-year study conducted by the Wildlife Center of Virginia, which shows that domestic cat attacks are one of the most frequent and most lethal causes of animal admissions at the Center.  In the 11-year period, of all small mammals admitted due to cat attacks, more than 70 percent died or had to be euthanized.  Cats have very aggressive bacteria in their mouths that totally obliterate smaller animals through bite wounds.

The Center cannot treat domestic admissions as we would wild patients.  That required this stray rabbit would have to be “adopted” in order to be treated as a staff pet.  I knew that taking him home meant he would have a big fight to overcome to survive, and his chances were stacked against him.

My heart still cautious to have another pet bun, I took him home.  I was his only hope, and he deserved a fighting chance.

Dr. Claire set me up with fluids, antibiotics, pain meds, and some syringes for force-feeding.

I held him close that night when my house was quiet, the dogs asleep, and Jimmie settling in for the night munching some hay.  I could tell the new rabbit was very uncomfortable, and he was not doing well.  I checked on him twice overnight.  His breathing was labored, but he slept.  It broke my heart to think that he was probably a pet and was either dumped outside to fend for himself or escaped and someone was missing him.  Released pets are not equipped to survive on their own — they rely fully on humans for all of their care.  What abandonment and panic he must’ve felt being out in the world on his own.

The next morning I woke up early to administer his morning meds and fluids and try to feed him.   This creature was doing so poorly that he didn’t want to swallow anything without some encouraging touches to his throat.

I put him back in his crate and checked on him about 30 minutes later.  At this point, he was laying on his side, labored breathing and refusing to sit up.  I knew that these were his last moments and it wasn’t fair for him to suffer any longer.  I drove him to the Center to ease his transition.  Humane euthanasia was the last gift I could give him — he was comfortably sleeping (snoring, even!) under anesthesia and went peacefully, finally free from the pain.

The minute I saw the rabbit and felt Rayshaud’s knowing look that I couldn’t refuse helping, I knew I had to share his story with all of you.  I am heartbroken that his story was so short, and did not have a happy ending, but his experience illustrates two things that I am very passionate about — keeping your cats indoors, and not releasing pets into the wild. 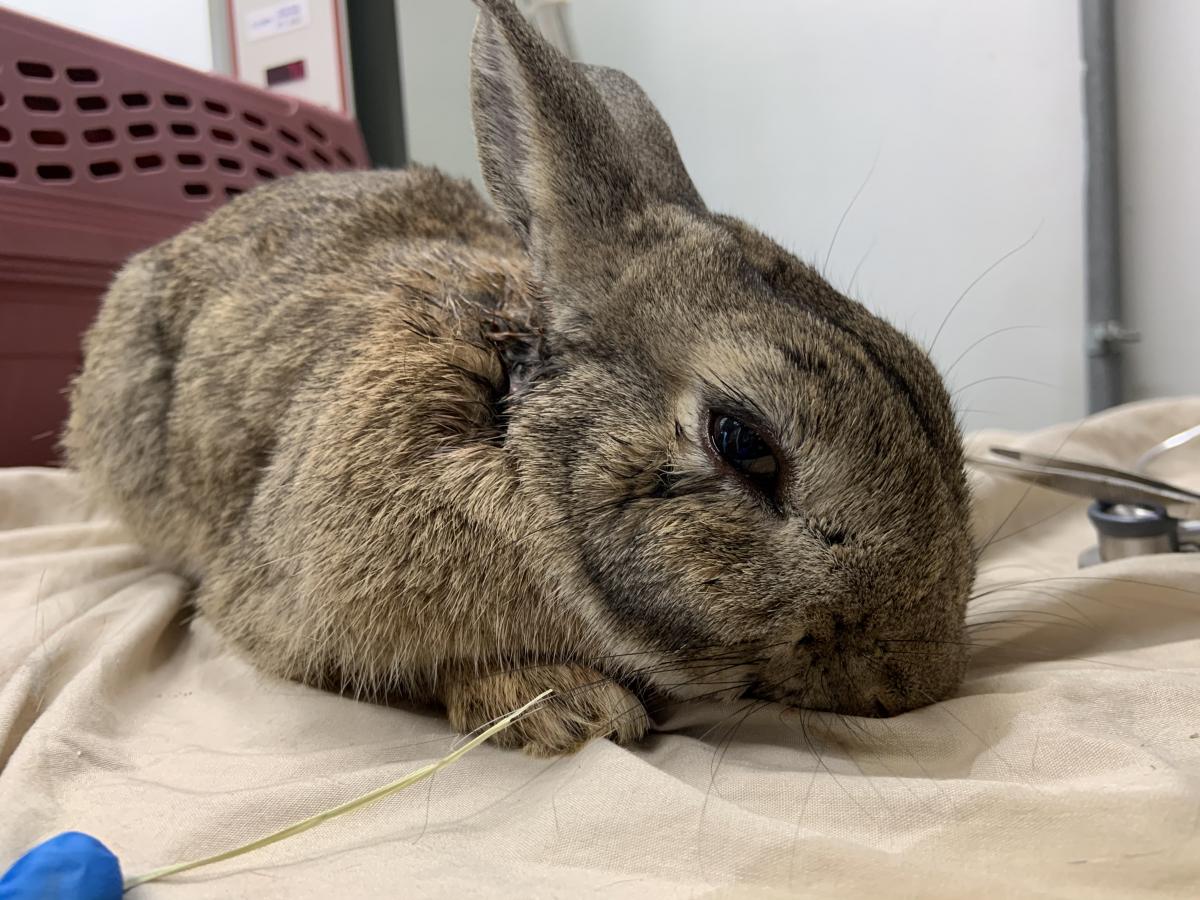 I named him Harris, and he was precious.  He didn’t deserve an ending at the claws of a cat, and I did the best I could for him.  I’m very lucky that I work with some very dedicated people like Rayshaud and Dr. Claire who jumped to action to help this little animal without hesitation.  Please let his story be a reminder that cats kill indiscriminately — they are not simply going after mice.  Their predatory drive activates with any small moving thing.  And, it’s not the cat’s fault — it’s our responsibility as humans to put cats in situations where that skill isn’t aimed at an animal unable to defend itself.  Animals — like Harris — deserve better.