In February 2020, we were actively planning Season Two of Untamed, the Center’s television show with Virginia Public Media. Editing and production for the actual show was underway, but Team Outreach was also brainstorming on what we could do for our Untamed compendium – our supplemental materials that complement each episode of the show. Aaron and I were excited to hit on this idea of Untamed Unfiltered – sort of an after-the-episode talk show in the style of The Talking Dead, where we’d recap what happened and get to dig a little deeper into stories that our special guests had to share. We were excited to get started.

And then, of course, by mid-March we were ushered into a strictly “work from home” world as a worldwide pandemic struck. Filming anything together – with multiple people in one space – would be impossible. Like so many people, we decided to explore this world of Zoom and see if we could make something work.

It wasn’t at all what I envisioned – instead of setting up a comfortable area in the Center’s library or outside in the woods to chat with co-workers and special guests, I was in my basement, trying every variation on lighting that I possibly had. I was bribing my dogs with peanut butter-filled kongs, hoping to possibly make them quiet for an hour while we filmed. I was trying multiple uncooperative webcams and stringing a variety of wires through the room, trying to plug directly into the router since discovering my wifi was unpredictably spotty.

While this was yet one more aspect of work that looked totally unfamiliar in this environment, we fell into a routine with our own production, and it started to feel normal. Many of the little frustrations that happened ended up being a catalyst for creativity – and a memorable part of our project.

I realized that my built-in webcam was not robust enough to handle a cool Zoom background that I envisioned. Instead, I was determined to create a “green screen” by hanging my actual green bedsheet on the wall and adding lighting with an old cobwebby shop light. Well, that didn’t work, but, unbeknownst to me, Aaron captured this feeble attempt and turned it into something fun – the “sting” (opener) for Untamed Unfiltered.

There were many attempts to bribe my dogs, walk the dogs before filming, shut the dogs outside during filming, remove every single squeaky toy within reach – but despite all that, there were constant interruptions from my adorable, yet very distracting, work-from-home officemates. Those interruptions were also captured by Aaron and turned into something delightful – one of my favorite gifts of this year, which perfectly encapsulates my work from home life.

Back in February, I never would’ve thought that this is the way our new project would go, but now I wouldn’t have it any other way. It was a fun challenge, and it was a great way to get to know Aaron better as a new member of our team. It was a really fun and different way to talk with co-workers, especially at a time when I wasn’t seeing any of them. It was also an unexpected way to be able to host a variety of former co-workers and colleagues who otherwise may have not been able to participate – I was able to reconnect with people I hadn’t talked with in a long time. 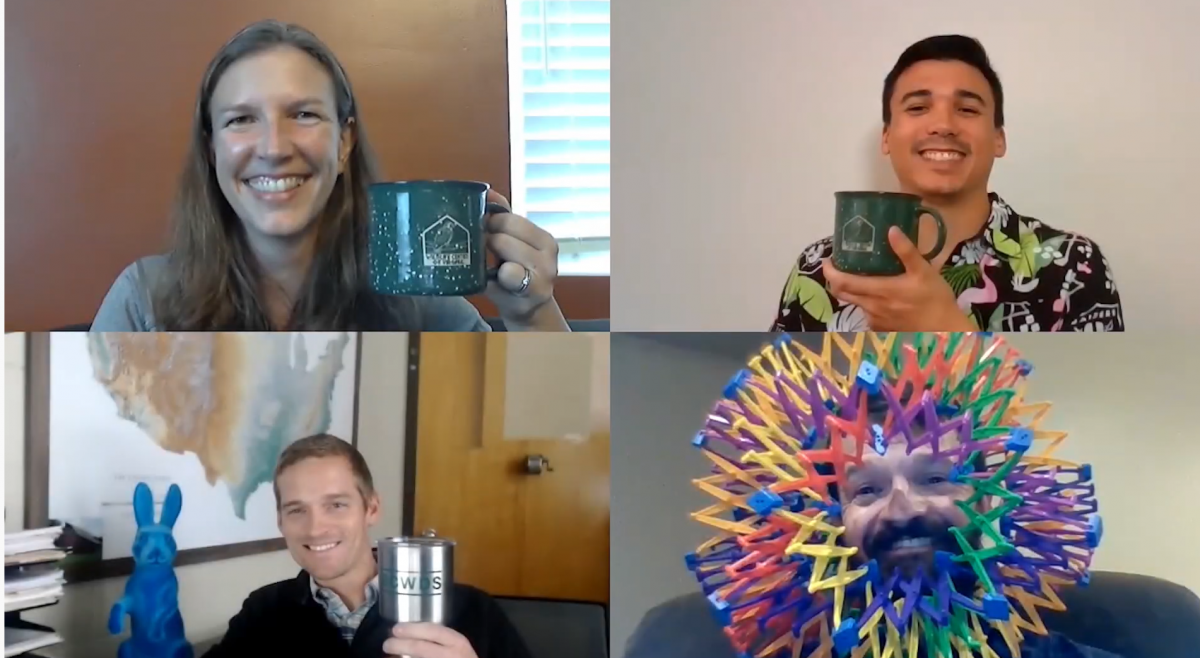 As we say goodbye to 2020 and look forward to 2021, I’m excited to see what new and creative things we can accomplish together and share with the world. My guess is that we haven’t even thought of many of the things we’ll be doing in 2021 – I think that’s the exciting aspect of the Center’s outreach work, just how ideas come together in a really organic way. I’m reminded of a similar thought I had at the end of 2013, as I reflected on the things we were able to do with technology. I’m excited to see where we grow in 2021!