As a newcomer to not only the Wildlife Center of Virginia but also Virginia, I spent this year doing a lot of exploring. Granted, due to the current situation, that exploring happened away from people, and out in the woods and hills of this big green state (or Commonwealth, if you care about semantics).

The best way that I found these little adventures was volunteering to transport and release many of our patients this spring, summer, and fall. In doing this, I was able to help our hospital staff complete their mission and to travel all across Virginia and visit places I never would have if I wasn’t carrying this precious cargo.

In just a few months that I have been here, I have released a Barred Owl, a groundhog, two Woodland Box Turtles, two Great Horned Owls, an Eastern Painted Turtle, a Red-tailed Hawk, a Brown Thrasher, and an Eastern Musk Turtle. You may have seen me do some of these releases on Facebook live, which is where I did my favorite release: the little musk turtle. 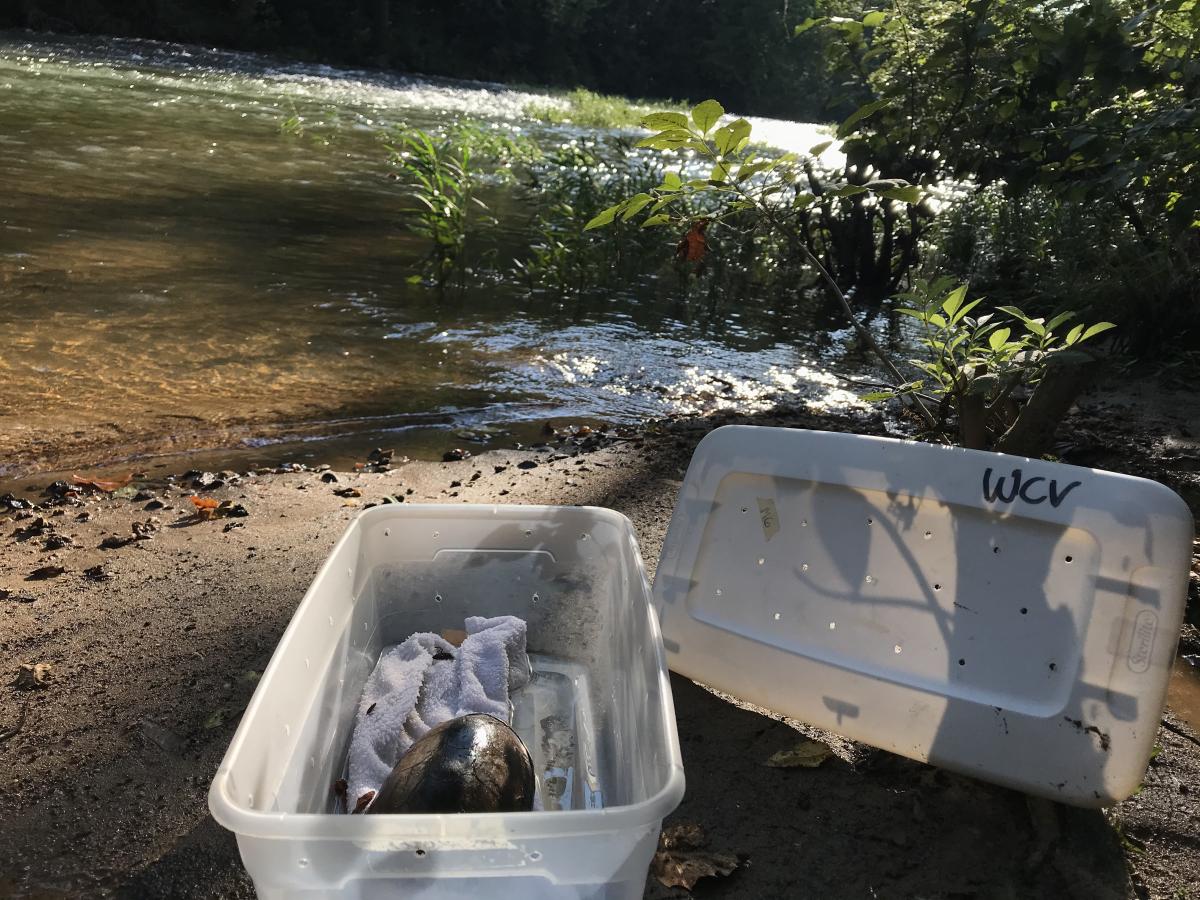 It was a warm summer day in Virginia, and I was standing ankle-deep in silty mud on the edge of the Rockfish River near Schuyler. I had climbed down the steep bramble-covered embankment, to get access to the river below, holding a small plastic tub containing an even smaller turtle. The sun was bouncing off the lively river water as I took in the sights and sounds of this place. After pausing for a moment to enjoy the peace and solitude, I grabbed my phone and began to livestream the release, sharing this turtle’s story with the world. After placing it on the muddy bank, I stepped back to allow him to survey his surroundings before taking his first steps to freedom.

Well, as turtles often do, he froze and didn’t make any moves at first. After a time, I decided I needed to go and release the Brown Thrasher that was waiting impatiently in my car, so I walked back up the thorny bank and set the bird free.  By the time I returned, the turtle had disappeared, probably moving downstream with the river’s current.

While I was disappointed to have missed the turtle’s eventual return to the water, I was also struck with the realization that this is the very reality of day-to-day life for many of our employees here at the Center. They spend hours, days, weeks, and months working to save, heal, rehabilitate, and nurture these wild patients, before watching them leave, never to be seen again. And although I’m sure there is a significant measure of happiness and pride from watching their patients be packed up for transport, our rehabilitators and veterinarians often don’t get to experience that animal’s first steps, flaps, slithers, or leaps back to freedom. They simply get back to helping the next patient do the same.

I think sometimes it is easy to overlook the sacrifices that our hospital staff make for the sake of their patients. I have seen firsthand how much work and dedication they put in, especially in a year such as this. And often, those sacrifices don’t end in a sunny day next to a river, watching the fruits of their labor stand quietly on a muddy bank contemplating their own freedom. As we come to the end of a year that has been anything but ordinary, I want to thank and congratulate our hospital staff for being extraordinary.