What it Really Means to Love Thy Neighbor

On the Fourth of July this year, I climbed into my Jeep in the late evening just as it began pouring rain. I was in such a rush from my front door to the car, I did not see that I had startled “someone” in the process …

As I frantically pulled the car door shut, I realized I had eight eyes staring right at me – a foot away – at my eye level. I was face-to-face with a spider, which was perched silently beyond my driver’s side window. The spider must have been just as surprised as I was to realize that neither of us was traveling solo any longer, and I watched it make an elaborate escape to the inner casing of the mirror.

Suddenly it made sense; in the days leading up to this, I had repeatedly noticed spider webs stretching from the side mirror to my car door; I didn’t think much of it. The first time I noticed a web, I simply swiped it away. The second time, I chose to leave it be, thinking the spider had decided to hang around for just a bit longer. Never before this particular day had I actually seen the culprit.

Now that I had, I was intrigued to know how long it had lived there. Over the weekend, I watched out for my new little friend. I could have easily removed the spider, or worse, but it was obvious that something about my car mirror was quite appealing. I didn’t mind playing landlord for just a few more days. 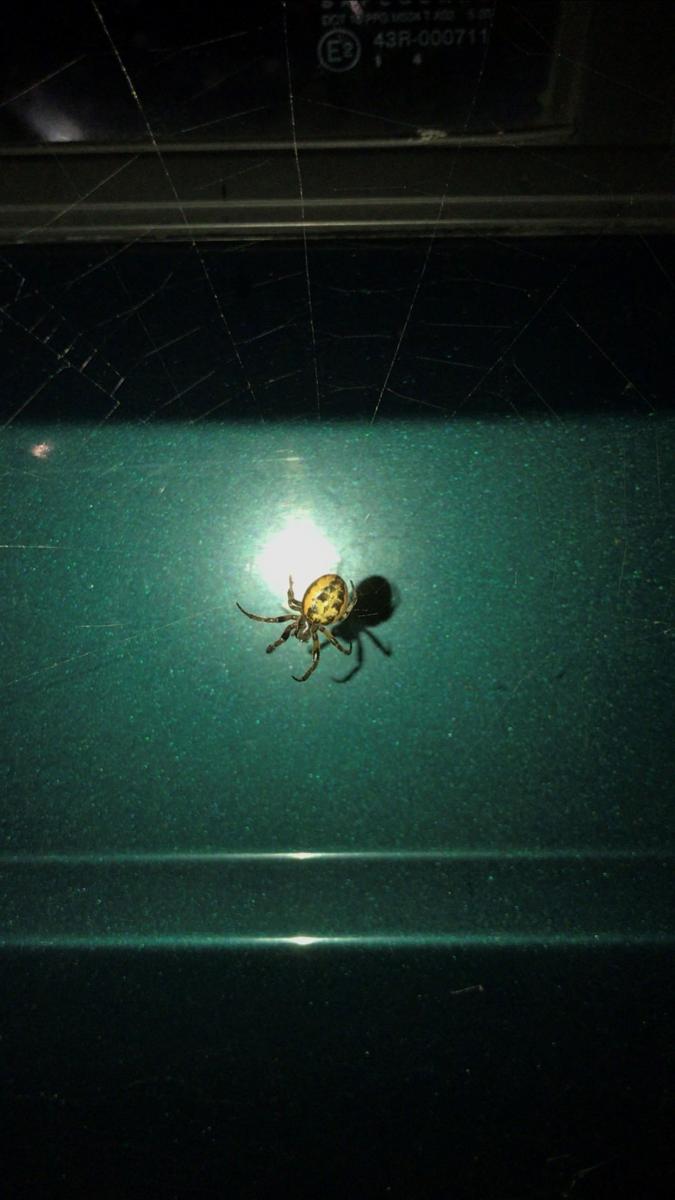 A few days turned into a week. The spider, who I had finally decided to name Harry, was present every night, rebuilding its web or feasting on tiny insects. I was sure to give its rump a poke whenever I needed to take the car somewhere at night, in fear that the wind while driving would send my new neighbor packing. I was never too concerned that it was going to turn around and bite me, as anytime I had ever poked the spider, it simply hightailed it back to the inside of the mirror.

I told a few of my coworkers about Harry and the little routine we seemed to have developed. My colleague Maggie even looked at a photo of the spider and brought up the idea that perhaps Harry was a Marbled Orb Weaver! I was more than happy to find out exactly what species “my” spider was, and when I shared the photos with the Wildlife Center’s Vice President Lacy she enthusiastically confirmed that it was indeed an Orb Weaver – and that Harry could be short for Harriet, because my spider was a female!

In the weeks following, I learned more about Marbled Orb Weavers –  how they remain very still at the center of their web, waiting for prey to become caught, or how they can grow quite large but are rarely aggressive. I was fascinated by the fact that Harry remained within my car mirror as I travelled to and from work, home, and even long distances! She sure does get to travel a lot for a spider; every weekend she goes to my hometown about an hour and a half away from where I live now. She’s even been to West Virginia a time or two!

Our routine has always remained the same; she stays in the interior of the car mirror, behind the reflective part during the day. At around 9:30 p.m. she emerges and either feeds on the prey that she caught in her web that day, or she begins rebuilding her web if my daily drive on the interstate was too much to handle. I rarely drive at night, especially now that I know she’s there-- but when I do have to drive at night, all I do is poke her rear gently and she will retreat back to her home long enough for me to drive from place to place.

The only time the routine has ever changed was a few weeks ago--one of the hottest days this summer. It was 100 degrees (and climbing) outside, and when I left work for the day at around 5:15 p.m., I was very surprised to see that she was resting in the shade on the underside of the car mirror, an uncommon sight during this time of day. I figured the casing of the mirror was probably too hot and stuffy for her to be inside, though I had no choice but to give her a poke and watch as she reluctantly returned to the mirror. The whole drive home I was nervous that she was slowly cooking, and I can’t say that I didn’t speed a little bit, trying to make it home so she could come back out into the open air.

This proved to be only Part One of a climactic series of events in our relationship that has caused me an unreasonable amount of emotional distress. It took more than 24 hours for Harry to make a reappearance after that, and for the entire day following the last sighting, I was so worried that, because of me, she may have passed away from the heat. The relief I felt when she finally showed up on July 22nd was unexplainable.

She has another habit that’s convinced me that she is living a life on the edge -- she tries to come back out onto her web at night whenever I come to a stop sign or light. I’ll slowly accelerate again and watch in horror as the wind blows her itty, bitty body around. I found myself screaming at this little spider for pushing too many boundaries.

While I am well aware that she may be “just a spider”, the weeks I have spent chauffeuring her around have only made me feel more and more responsible for protecting her. I even went as far as to delay my car inspection until the last possible second as I feared she would be spotted by someone and they would kill her, thinking they were doing me a favor.

It’s been about a month since Harry made her first appearance, and I feel it’s important to share why I have grown to care so much for someone so small and seemingly insignificant. I’m sure that I’ve squashed plenty of spiders in my life, especially growing up with someone who had a great fear of them (my mother.) However, as is true with a few other aspects of my life, coming to work at the Wildlife Center of Virginia has taught me a thing or two about tolerance.

At first, I thought that allowing Harry the Orb Weaver to continue living in my car mirror was only benefitting her. I thought I was showing her an act of kindness that many other people would not care to do. But that’s not quite true. Over time, even just a few short weeks, I have grown to feel that Harry’s existence benefits me, too.  She could have chosen any car to live in, but she somehow managed to find mine, and I could not push that aside as being a coincidence.

As a front-desk coordinator, speaking with people who have questions about “nuisance animals” is one of the many challenges I face daily; often, these calls relate to someone having to share their space with a wildlife neighbor. I often offer guidance on the benefits of having that animal in the caller’s backyard; I am teaching tolerance. While most of the animals I am helping people better understand are far larger than a little spider, I feel that it is just as important, if not more important, to encourage people to tolerate even the smallest of creatures. The life of one spider might not have a huge direct impact on the environment, but think of all the people in the world and how many spiders may be saved by reversing just one person’s intolerance?

Every animal, even— and especially— arachnids, play a key role in our ecosystem. In their very short lifespans, spiders like Harry will eat dozens of bugs that humans consider pests. Some species of spiders, including Harry, will even rebuild their webs after every time they catch something, even if this means building several webs in a single day. They are incredibly hard workers and we simply do not give them enough credit.

I think there is much to learn from my eight-legged neighbor, and though I know not everyone will have such an open mind when it comes to all those critters considered “creepy and crawly,” I can only wonder how different my summer—and perspective—would have been had Harry the Marbled Orb Weaver chosen someone else’s car to make her home. She has taught me the importance of accepting others and recognizing the value that each and every animal -- and person -- possesses. I did not have to allow her to live so close to me, yet now that she’s here, I find myself dreading the day that will come where she will no longer be around.

[Editor's Note: If you suffer from "spider intolerance", arachnophobia, or if you're just curious about spiders, we recommend you read Spiders: Learning to Love Them by Lynne Kelly -- the August 2019 Wildlife Book Club selection that garnered 4-star ratings from book club participants.]