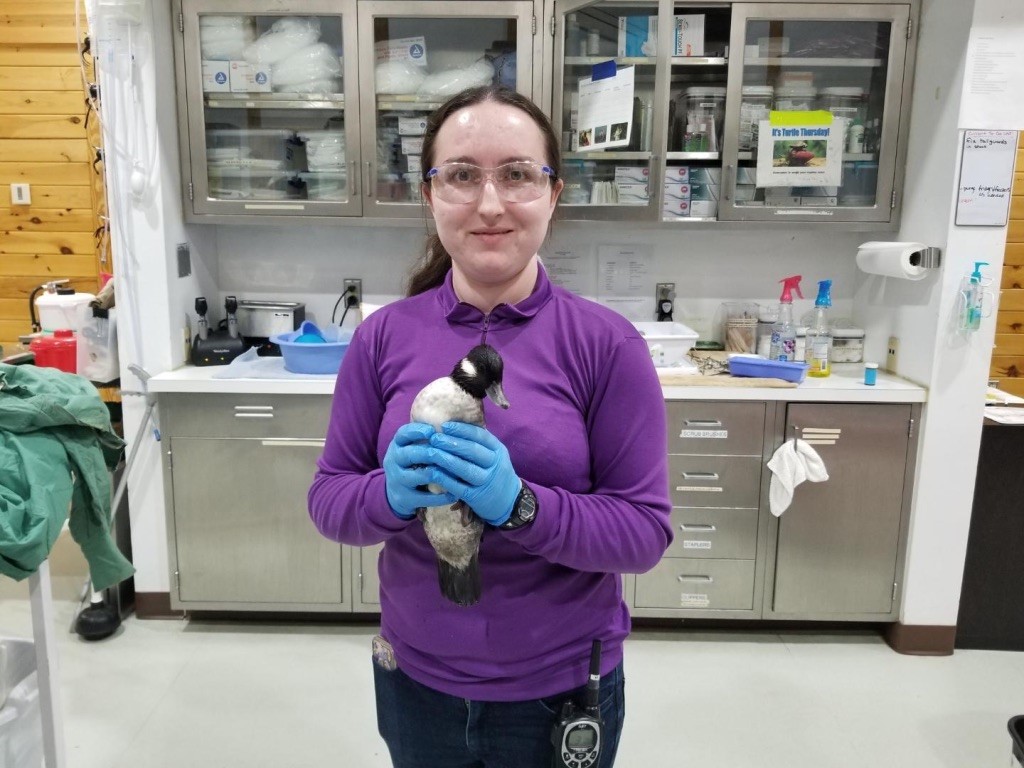 When I first applied to the Wildlife Center of Virginia’s rehabilitation externship program, I had no idea what I what I was getting myself into.  I had barely any experience working with native Virginia wildlife.  All of my previous animal care experience was with domesticated animals, specifically horses and dogs. To say I was nervous coming to the Wildlife Center was an understatement.

During my first week at the Center, I learned about all the different tasks I would be performing during my time here. I learned how to make meals for a variety of patients, syringe-feed baby squirrels, feed and pick up after raptors, and care for turtles. By the end of the week I felt I would never be able to remember everything I was told. But looking back now, 12 weeks later, I have realized that I not only remembered everything from that first week, but that I can accomplish those tasks exquisitely. Throughout my time here I have found my favorite daily tasks and my not-so-favorite tasks.

One of my favorite assignments was caring for raptor patients. When you are assigned to raptors, you first have to make all the meals for raptors under your care for that day. Depending on the day and/or species of raptor in care, meal prep consists of mice, rat, fish, chick, or quail. After meals are prepped, you go into each raptor’s enclosure to feed them, give them new water, and pick up old food and pellets. Some of our patient raptors have to be exercised, which means having them fly back and forth in their enclosure a certain amount of times and watching to see how they are flying. For instance, for owls, we have to make sure their flight is silent so their prey cannot detect them in the wild. We do more on weigh days for raptors, which is when we capture and restrain them in order to get a weight and a body condition score. When I came to the Center, raptors were the animals I was most excited about working with. On my first weigh day, I was nervous but excited because I had never caught a raptor before. Slowly but surely I got more comfortable handling raptors. I started off learning how to restrain medium-size raptors such as Red-Tailed Hawks and Great Horned Owls, then worked on handling smaller raptors such as Eastern Screech-Owls and American Kestrels. It took a bit of work, but in my final weeks, I could confidently capture and restrain any of the raptors found at the Center, including Bald Eagles.

My second favorite task was being assigned to the ICU, where we house a variety of baby mammals and birds. I arrived at the Center thinking there would be no babies to feed since I was arriving at the end of baby season, but I was very wrong. We had several baby squirrels throughout my externship. ICU duties included warming up the formula for the squirrels, and while that was heating, making new clean cages for the squirrels to be transferred into after their hand-feeding. The number of hand-feeding sessions was determined by the age of the baby squirrel -- younger squirrels in our care needed four feedings a day, while the other squirrels were reduced to fewer feedings. When I fed my first squirrel, I felt a bit overwhelmed -- there's a lot to think about, including pulling formula into the syringe, testing it on my wrist to see if it was too warm or too cold, feeding the squirrel, extracting the nipple from its mouth, and repeating the process all over again. I had to do all of this while trying to gently restrain the squirrel. By the end of my first day in ICU, I felt I had learned a lot and had accomplished something. By the end of my externship, I could easily feed baby squirrels and I became good at keeping them calm.

My externship here at the Wildlife Center has been a wonderful experience. I started off with hardly any experience with wildlife and I was nervous about practically every task I was given. This externship has given me more confidence in working with wildlife and has brought me down a path that I never thought I would go down. I am so glad I applied to WCV and will treasure every ability I have learned here.