2019 year-end memory … and five fun facts.  In the spirit of the season, let’s call them Five Golden Wings.

In seeking inspiration for my 2019 year-end memories, I did a quick review of my memories from earlier years.

So … in keeping with all of those findings, my 2019 recollection is a somewhat cheeky remembrance of an eagle release.

On June 12, the Center admitted a Bald Eagle that reportedly – their words, not mine – “fell from the sky” at a landfill in Campbell County.  A Conservation Police Officer was able to capture the bird and transported it to the Wildlife Center. 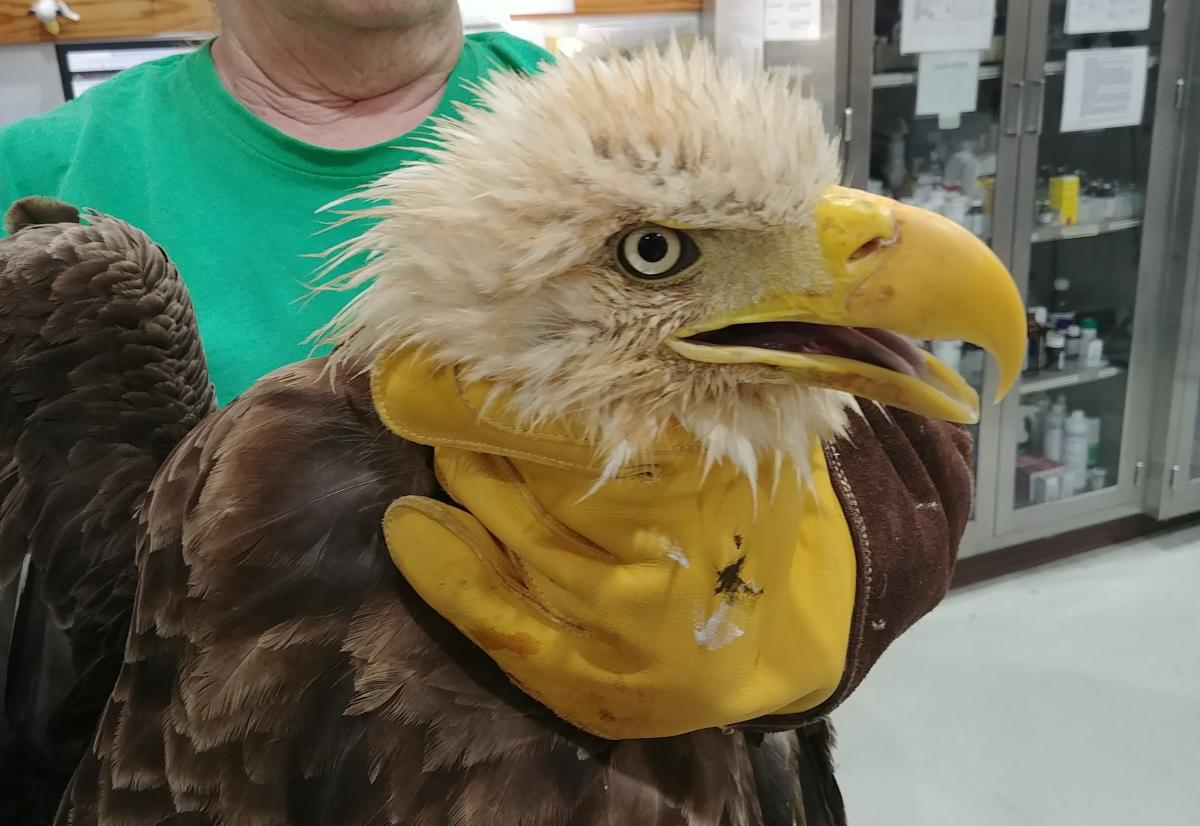 Upon admission, the eagle was lying down and motionless; at first Dr. Karra feared that the bird had died during transport. Suspecting that the eagle had ingested some sort of toxin – a landfill is pretty much a Golden Corral endless buffet of hazards for a scavenging eagle.  Dr. Karra gave the bird fluids and a heart stimulation medication and placed the eagle in our oxygen chamber. The bird was later treated for lead exposure.

As it turns out, the eagle had some history – it had been banded back in 2012 as a hatch-year bird in Mecklenburg County, North Carolina.

The seven-year-old eagle bounced back from whatever she ate, responded well to treatment, and by late July was deemed ready to be released.

Best I could tell, the Center had never before admitted a Bald Eagle from Campbell County – and we had never released an eagle there.  Campbell County is south of Lynchburg, east of Roanoke – Rustburg, the county seat, is about 70 miles from Waynesboro.

Rustburg was named for colonial settler Jeremiah Rust and is not so named because it is rusty or in decline.

I did some Google-searching and map-scouring. Hmmm, no luck. I needed to find a place that would be good habitat for a just-released eagle … and also good habitat for humans attending a release [bathrooms, a parking lot, a GPS address].

I reached out to the Campbell Parks and Recreation department and talked to most-helpful Mary Pascale [the Campbell County equivalent of Leslie Knope].

Leslie Knope was born in Eagleton, Indiana. Eagleton! She was not born in Pawnee, due to a raccoon infestation at the time. Google can help you learn more about Leslie.

Mary offered some alternatives and we decided on Long Island Park – about 60 acres, located right along the Staunton River, complete with ample parking … and bathrooms.

The Staunton River is an 81-mile stretch of a 410-mile river otherwise known as the Roanoke River, which flows from the Blue Ridge Mountains to Albemarle Sound in North Carolina. Why does this portion of the river have a different name?  I’ve asked a few people about that. Thus far I’ve gotten sort of muddled responses that pretty much end up with the observation that I’m not from around these parts.

So … Long Island Park it is.

The release was set for July 30, at 11 a.m.  By 11, it was hot and steamy at Long Island.  I mean, it was July.  Ed arrived with the eagle, talked to the crowd about its history, and moved to near the pitcher’s mound of a baseball field.  One … two … three … and the eagle flew away, powerfully. A perfect release. 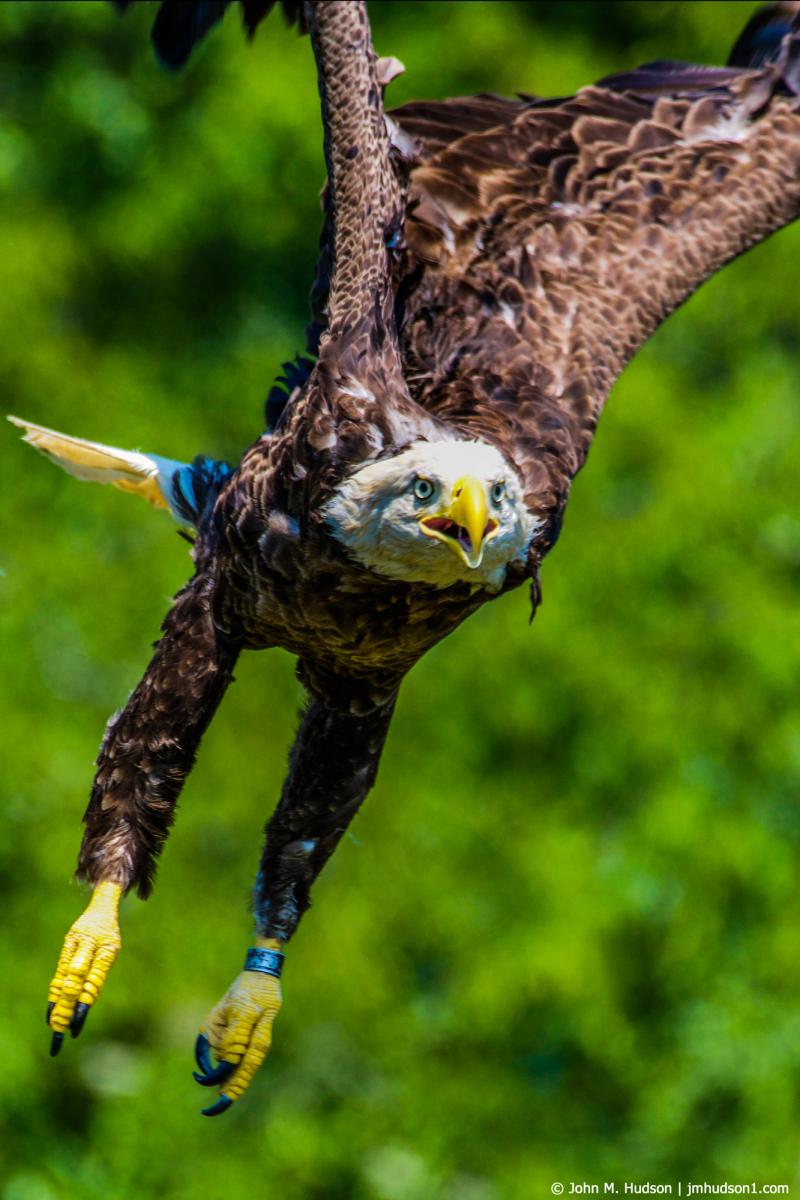 But, what I remember most about the event were the people who attended.  There were more than 100 – and I got the chance to chat with many of them.

There was a couple that had driven up from North Carolina.  They had been involved with this eagle back in 2012, when she was a hatch-year bird.

There was Cory Harbour, the Conservation Police Officer who had rescued the eagle and driven her up to the Center.  With him were his colleagues and his justifiably proud family.

There was Mary Pascale and other folks from Parks and Rec … and animal control and law enforcement officers.

There was Franklin Rice, who came to the release with a camera lens that was about the size of the Hubble Telescope.  Franklin is a local textile worker who got permission from his employer to take the day off to go to the release.  Franklin is a talented nature photographer and puts that big lens to good use; he is particularly proud of his photo of a partially leucistic American Robin [that’s Lacy’s term].

The actual Hubble telescope is nearly 44 feet long and weighs more than 24,000 pounds. OK, so, maybe Franklin’s lens was a little smaller than that.

I had brought a few copies of the Center’s report on Bald Eagles and handed them out to some attendees.  One young man was studying it carefully; his mother told a newspaper reporter, “We didn’t even sleep last night, we were so excited.  I’m so excited I feel like a kid.”

In fact, there were an abundance of children at the release – and they were all pretty excited.

And there were many people who were attending their first eagle release.

The resurgence of the Bald Eagle population is one of the great success stories of the conservation movement. Here in Virginia, that means that, with increasing competition for food and habitat, eagles are moving away from traditional nesting areas along the Chesapeake Bay; eagles are increasingly moving up rivers like the Roanoke/Staunton.

For me, an eagle release is always an emotional event – and it reinforces and celebrates what we do here at the Wildlife Center.  It was great to share that experience with so many first-timers.

AND … we got some great media coverage.  I’m always delighted when we get to share this kind of news through the media. 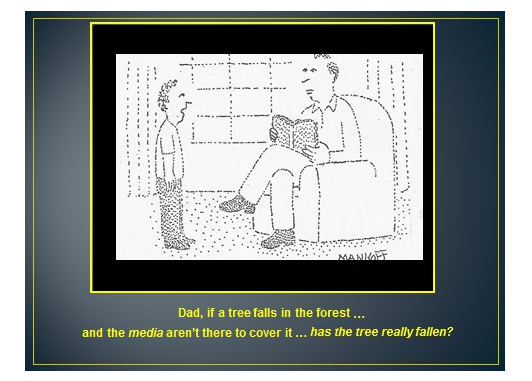 Links to the media story have been posted on the Center’s website, as part of the description of the release of this Bald Eagle.  Take a look and a listen – you can see Ed and the eagle release and CPO Cory and the children and Frank and the partially leucistic American Robin photo.  If you crank the thermostat in your home up to about 95 degrees – it’s like being there.  [And … if you watch carefully … you might even see me scurrying about.]

This successful event – the timely emergency intervention of our veterinary team, weeks of recovery and rehabilitation, public outreach – was made possible through the support of caring friends.  Thank you!

P.S.  Added benefit.  For me, a trip to Campbell County takes one right by Dr. Ho’s Humble Pie: The Alternative Pizza.  “It’s the best, Jerry.  The best.”

This is the first time I’ve ended my Wildlife Center memory with a quote from Seinfeld.

P.S.  On December 12 The News & Advance, the Lynchburg newspaper, did a photo retrospective of the 2010s, publishing a selection of 100 photos from the decade.  Ed releasing that Bald Eagle is one of the photos they chose.  The photos are in chronological order, so look for Ed’s nearly at the end.  My advice?  Don’t be in too great a hurry … take some time to wander through these great photos.