It was a Thursday in late May, the busiest time of year for rehabilitation, when I received a call from a woman in Waynesboro. She found a nestling screech-owl at the base of a tree in a local park. There can be many reasons why a nestling raptor is out of the nest: it fell out, a predator pulled it out, its sibling pushed it out, or it’s actually a fledgling learning to fly. We determined it was a nestling that had no outward signs of trauma; however, I wanted her to bring the owl into the Center just in case it was injured from the fall.

The veterinary team found the owl to be a healthy nestling that was only slightly dehydrated. The Wildlife Center does a great job of raising orphaned raptors, but rehabilitation in captivity is always the last resort. If possible, we want to attempt re-nesting with all healthy raptors. The clock started ticking. Nestling raptors can only be re-nested within 48 hours if there are no siblings. If there are siblings, then you can re-nest up to a few weeks later. In this case, we didn’t know if there were siblings or not – actually, we didn’t know exactly where the nest was! Eastern Screech-owls nest in tree cavities a few feet from the ground, so you need a ladder to check potential nesting spots. Thankfully, the rescuer left a trail of orange tags that led us to the spot where the owl was found.

After emailing all our local volunteers, we finally found someone with a tall ladder who could go out to the park and attempt to find the nest. We were hoping there was a sibling, as it would make finding the nest a lot easier. After a long couple of hours, our volunteer called back to say he found a nest … with a baby screech-owl in it! He was even able to snap a picture so we could confirm they were the same age. 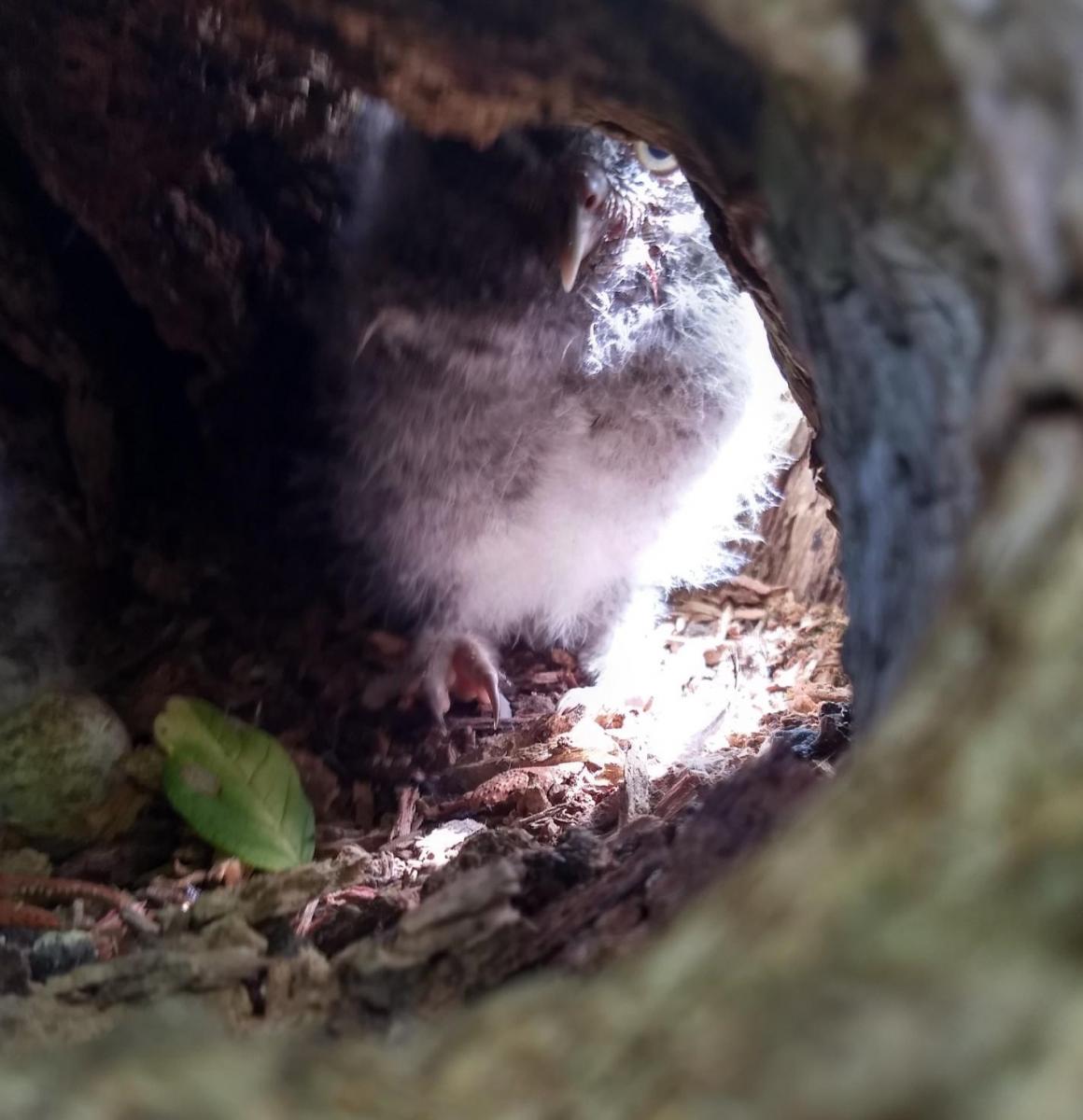 The next morning, our amazing volunteer came to pick up the owl that had been found out of its nest.  We were fairly sure that our bird was from the same nest that the volunteer discovered, but the good news is as long as the babies are of similar age, the parents will still care for the young even if it isn’t theirs. The volunteer also checked back the following day and confirmed all was well!

This is one of my first successful raptor re-nesting attempts and I love to think back on it when I’m finding it difficult to get a baby animal back to its parents; sometimes it would be very easy to give up and tell everyone to just bring the baby in. In those moments, I remember this story and remind myself that rehabilitation is always the last option – the best chance at survival for baby wild animals is to be reunited and raised by parents in the wild.