My favorite memory of 2018 started like many of my WCV days do - with the opportunity to share the stories of some of my wild ambassador friends with the world. It was a chilly September day, and the sky looked like it was going to burst open and pour rain over us at any moment as I pulled into the parking lot to meet outreach director Amanda Nicholson and our scaled, shelled, and feathered friends. We were attending the birthday party for WVPT [the Harrisonburg-based public television station] - a fun-filled festival complete with fire trucks, police cars, and rumors of attendance by Clifford the Big Red Dog!

Amanda and I set up a tent outside and got to the business of teaching the world to care about wildlife and the environment. I had decided to work with Oscar the Eastern Hog-nosed Snake that day. Amanda alternated between Grayson the Broad-winged Hawk and Wilson the Woodland Box Turtle (someday I will remember that we call them Woodland Box Turtles now without looking it up! If you still think of Wilson as an Eastern Box Turtle, you are not alone!)

Snakes pose an interesting challenge in wildlife presentations. There are people that refuse to even look in the direction of a snake, let alone step up to see one up-close. Then, there are people that love snakes - and those who feel everything in between, from begrudging tolerance to curiosity to acceptance. I'm speaking mostly of adults here, as most kids seem genuinely curious to check out a snake. It's easier to attract an audience with an owl on my arm; I've met far fewer people who dislike or fear owls! But I was up for the challenge. 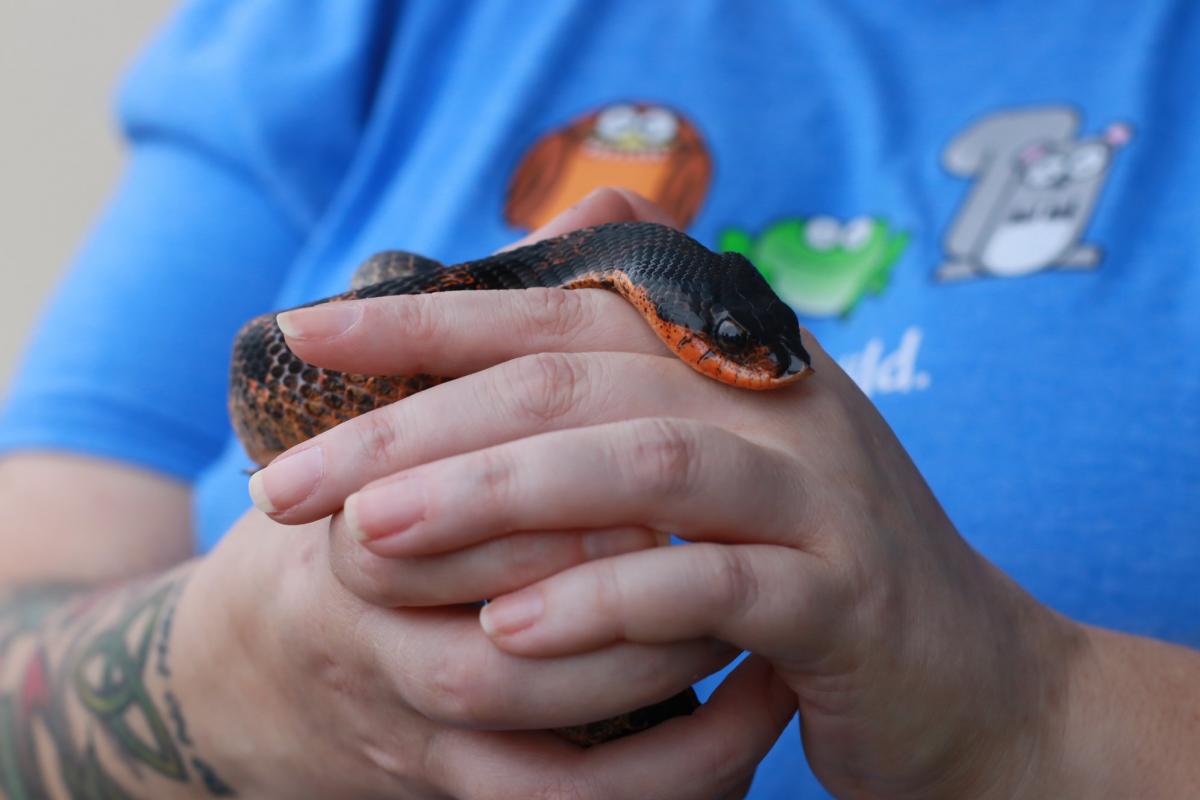 I thought this birthday party would be a good chance to share the awesomeness of snakes with kids and their parents. I think of Oscar as a "gateway snake." He's so small that it's hard to be intimidated by him. His upturned snout is so cute that even people that don't like snakes have a hard time denying the cuteness of that face. And the behavioral traits that earned Oscar his name (the Oscar award-worthy scenes where hog-nosed snakes "play dead" to evade predators) make such a funny story that it's tough not to be endeared! Once you appreciate Oscar, it's easier to accept other snakes (or so my "gateway snake" theory goes).

For maximum impact, I always led with, "Look how cute his nose is!" or, when someone stayed back and said they didn't like snakes, "But I promise you, this is the cutest snake you will ever see." It worked! Even the people that initially said they didn't like snakes stepped up to look at Oscar and listen to his story. Then, I gave people a few positive snake facts - like their role in controlling rodent populations, which can ultimately help decrease the prevalence of Lyme disease (fewer rodent hosts for ticks = less Lyme!), or how they can eat the insects that have been destroying your beloved garden (look, Mom - no pesticides!) I may not have converted anyone into a snake-lover, but I know for certain I at least made a few new snake-accept-ers.

That's always the best part of the day when I'm working with the Wildlife Center - seeing people come to a new understanding about an animal or the environment or each creature's place in the ecosystem. The second best part of this particular day was when Oscar took a nap in my hands. It limited my options for telling snake-tongue stories, since he wasn't tongue-sniffing everybody, but it made me happy that Oscar was relaxed enough to take a little snooze.

The third best part of this particular day was seeing former rehab intern Jordan Herring in a starring role as Smokey the Bear (a spectacular performance). We never did get to see Clifford the Big Red Dog, but Jordan the Big Brown Smokey the Bear was even better. 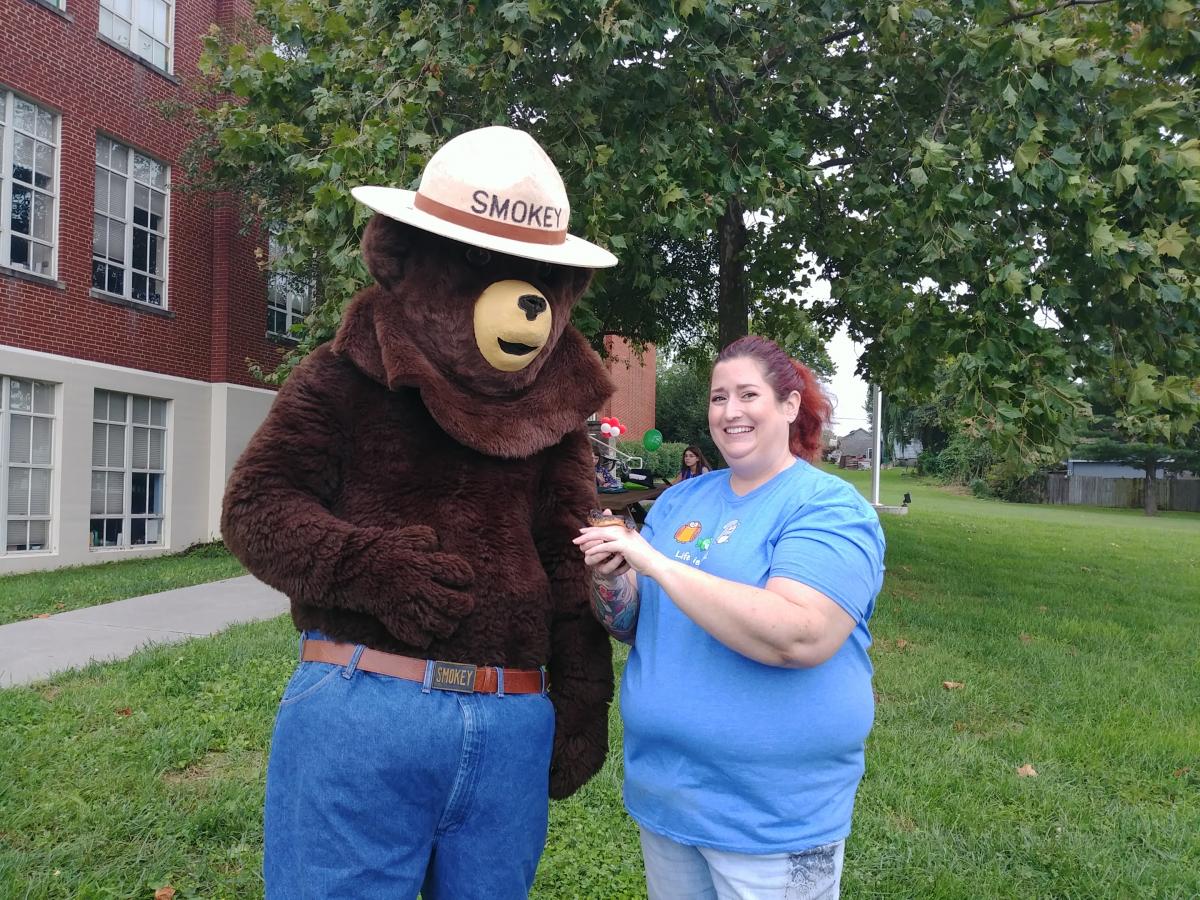 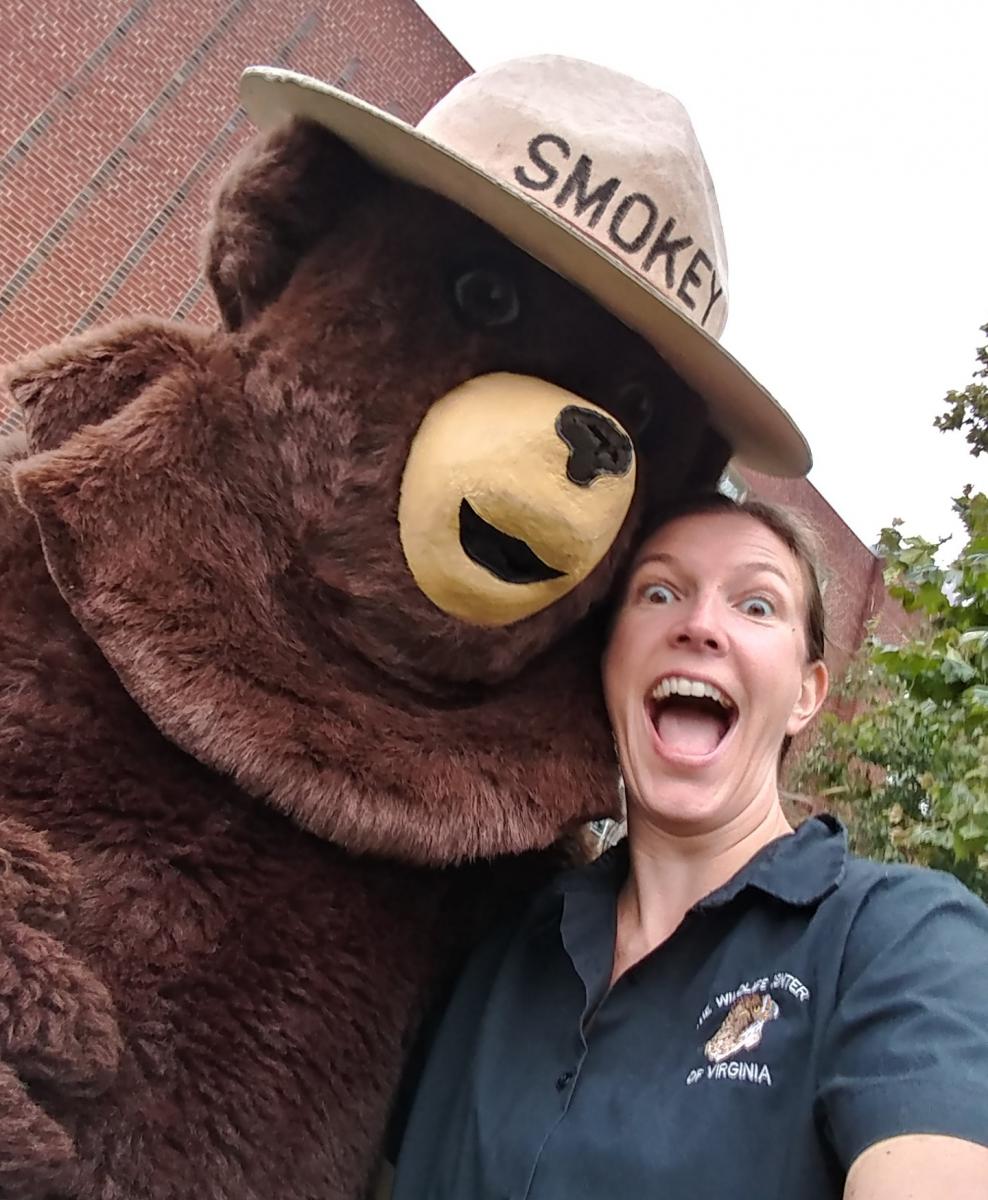 The fourth best part of the day was the Big Fish version of how the day ended: Amanda had stepped away to retrieve end-of-the-day snacks for us, and I was showing Grayson to one last group of people. All of a sudden, the menacing skies stopped taunting us and unleashed their fury. Wind ripped through the party, shaking our tent until its stakes sprang from the ground. The tent flew through the air like it was in the Wizard of Oz! Rain poured down and Amanda rushed to help the onlookers that were chasing our tent down the road while I shielded Grayson from the flying debris.

OK, that might be a little dramatic. It did rain and the tent did blow a couple of feet away and yep, I ran in the opposite direction with Grayson (bird > tent!), but the tent was caught quickly and we were able to get it taken down and put away and everything was fine. It's a lot more fun to tell the Big Fish version of the story, though! Biggest fish you've ever seen!

Here's to more opportunities to teach the world to care about and to care for wildlife and the environment in 2019. Happy new year, everybody!