I’m the type of person that struggles at sporting events. Instead of feeling joy for the winning team, I feel sympathy and disappointment for the losing team. Similarly, my “favorite” patients tend to be the “under-dogs” rather than the flashy charismatic patients that often get the most attention in wildlife rehabilitation.

I truly love all my wildlife patients. They are all so incredibly fierce and adapted to do their “job” in an extraordinary way. I am continually impressed and surprised by their ability to heal, and their ability to cope with severe injuries. The case that gave me the most satisfaction so far this year isn’t one that required fancy surgery or intensive care; it was actually one of my first cases as the veterinary intern at the Wildlife Center of Virginia.

In July, an adult female Mallard duck came to the Wildlife Center after she was found on the side of the road, unable to fly. We suspect she was hit by a car.  When she arrived at the Center, she had multiple cuts and bruises and two broken bones in her right wing. Her radius (part of her forearm) was broken very close to the elbow joint, and a little (but very important piece) of her metacarpus (wrist) was broken. These fractures were particularly concerning because both were very close to joints, which meant that if they healed in an even slightly abnormal position, the duck would be unable to fly and not considered releasable. We placed a wrap on her wing to stabilize the fractures, treated her wounds and gave her plenty of pain medication and food.

The wounds healed quickly, and we monitored the progression of her fracture healing with radiographs every week. Things appeared to be healing well, but I was still nervous she wouldn’t be able to fly. Several weeks later it was time to flight test her. It is challenging to evaluate the flight of waterfowl (ducks and geese) in a captive setting, as they need a long stretch to run along before they can take off. In order to check her flight, we had to take her up into our large eagle flight pen (without an eagle in there, of course) and run behind her until she took off. Dr. Ernesto did the honors while I observed. She flew perfectly!

A few days later, I released her at a local pond, where there were other Mallards and Canada Geese. Interestingly, she went straight for the Canada Goose. I’m pretty sure she knew her doctor was Canadian and that something from Canada would be a good choice for a companion. I think I liked this case so much because we simply set the duck up for success and kept her safe and comfortable while she did all the healing she needed to do, which is such a big part of wildlife rehabilitation!

Of course, there were a million (well more like 1,000) other cases that excited me and inspired me as much as this one and that is because I truly have the best job in the world. Getting up every day and coming to work is easy because I know I’m going to have a great day, with great people, in the most amazing place, doing the coolest and most meaningful work. 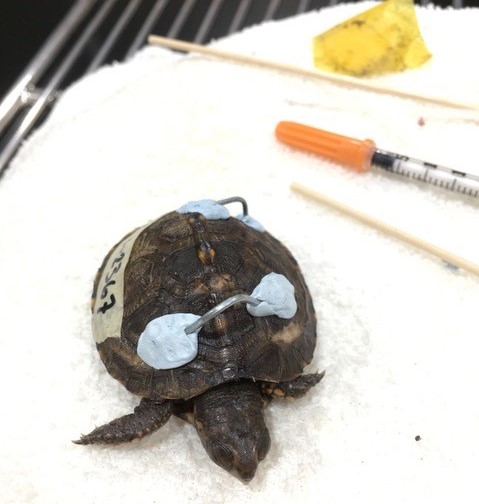 Runner-up moments/cases would be: repairing a shell fracture on a 25 g Box Turtle hatchling (I had to use a paper clip because traditional bars were too big!); removing a fishing hook from the inside of the neck of a 12 kg snapping turtle; repairing a humeral fracture in a Bald Eagle with Dr. Ernesto; removing five snakes from a single glue trap; and traveling to Richmond with a Black Bear cub so that it could have orthopedic surgery on its elbow after being hit by a car.

Because of my love for the “under-dogs”, people will often question, “Why do you bother rehabilitating something that is so common, like a squirrel or a duck or crow?” My response to them is always the same: ”does a duck or a crow experience pain and suffering any differently than an eagle or a Peregrine Falcon? Is a squirrel that was hit by a car less deserving of pain medication than a bear suffering the same injury?”  My job as a veterinarian is to improve animal welfare and relieve animal suffering, and for me, that applies to all animals whose paths I cross, regardless of their species or natural history.  I feel incredibly fortunate to work in a place where there are so many opportunities every day to improve the welfare of wild individuals, especially since so often their welfare has been diminished due to human activity.

The last six months have been nothing short of incredible. This Wildlife Center of Virginia and wildlife rehabilitation mean the world to mean, and I am so honored to be part of this incredible family!