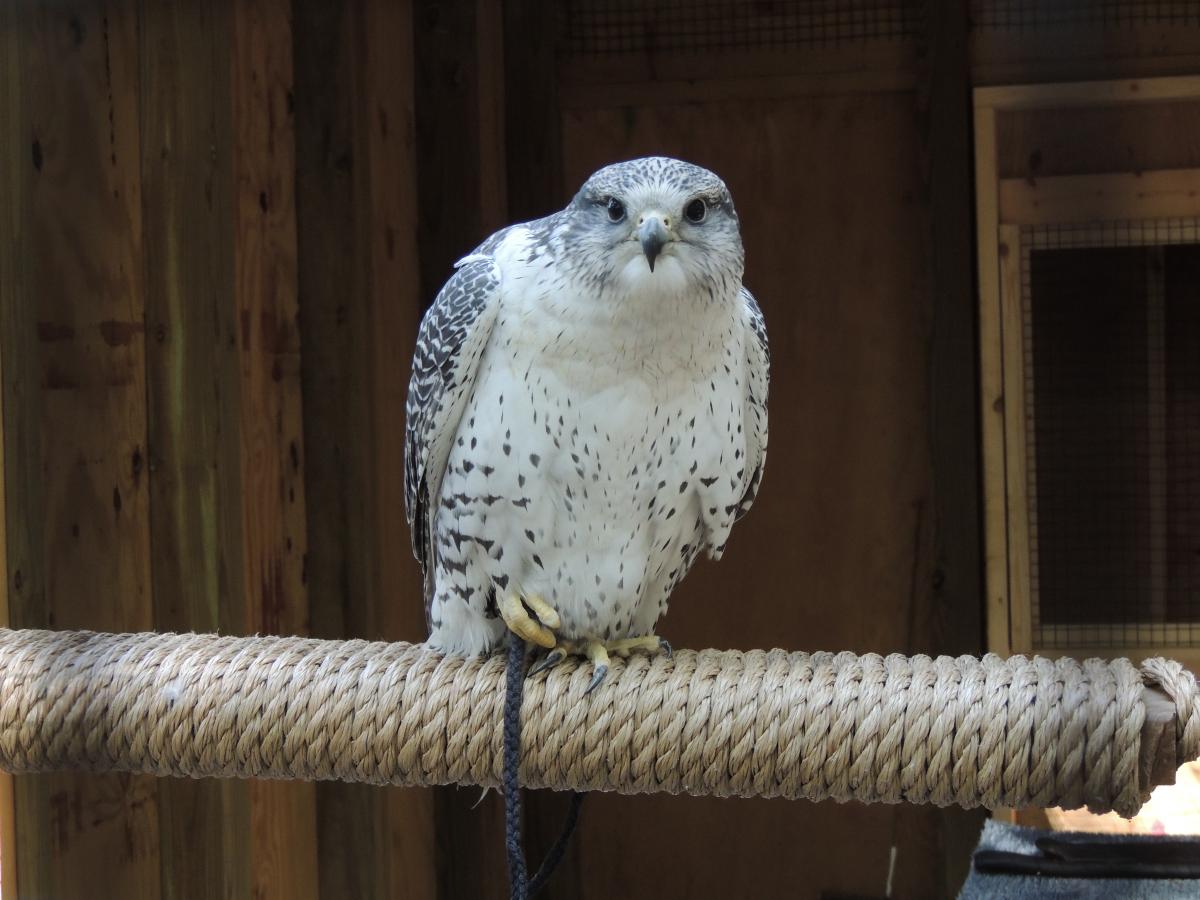 This year, I had the honor and privilege of working with Hudson, our new education Gyrfalcon. It’s always exciting to start working with a new member of the ambassador team – getting that first insight into their individual personalities and habits.

Hudson came to us from a former wildlife rehabilitator/educator; we didn’t have much history on him, so we were unsure of the details on his former housing, training, and handling. During our assessment period, before Hudson was added to our permits, he was housed in a patient flight enclosure. I decided to essentially “start from scratch” in the training process; while I knew Hudson was used on the glove before, he and I had to build our very own relationship and routine.

During the past few years, we’ve used a number of training methods and plans, but in recent years have shifted to training a new bird in their enclosure, using basic operant conditioning methods. Step one for Hudson was to establish a specific spot in his enclosure where I’d drop food, so I created a flat, turfed perch somewhat close to the door of his flight pen. At first, I’d drop food on that perch and would leave the enclosure, then I’d drop food and stand outside the enclosure and watch for him to eat; next would be to drop food and stay in the enclosure … and so on, until we shortened the distance between us.

Hudson is very food-motivated and curious, though is wary of new people. But, he and I progressed fairly quickly through our initial steps. Every day, at least four times a day, I’d drop food on that flat, turfed perch – our “home base”.

About two to three weeks into the training process, there were a couple of times when I’d enter the enclosure to find a rock on our “home base” perch. I didn’t think anything of it, and brushed them off the perch. 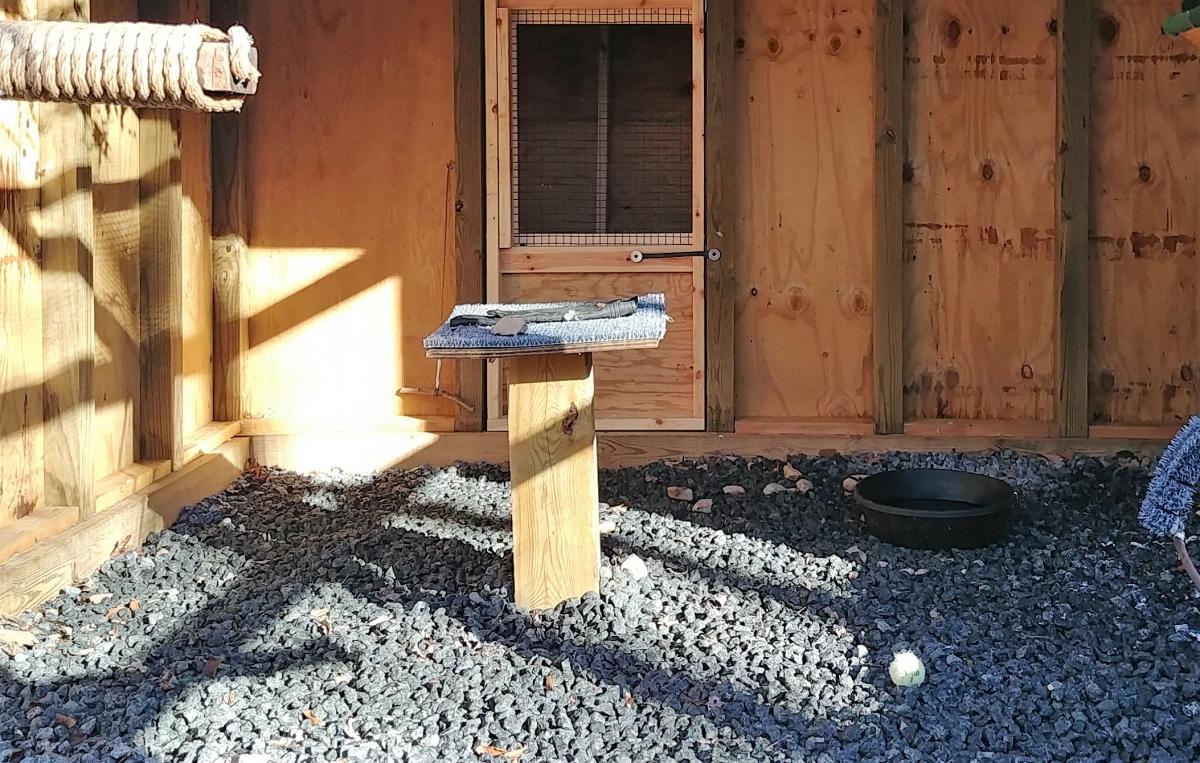 One day when I entered, I found a substantial rock on “our” perch. It must’ve been the third or so time a rock was there – this time, the size of the rock made me pause. Was Hudson intentionally putting rocks there?

In thinking about it now, I’m not sure why I ever doubted his intention – it’s not like he would accidentally clutch a rock in his talons and carry it somewhere … it’s not like the rocks were getting stuck to him!  The only way for them to get there was by his intention.

As the weeks progressed, I intermittently found more rocks placed on the food drop perch – and one time, a small piece of wood. They were always decently sized rocks – bigger than the ones that made up most of the flight pen floor. Was there a chance he was putting them on “our” perch … for me?

In reality, I have no idea why he likes moving rocks around. But on the day I found a heart-shaped one on our perch, I decided to embrace my inner anthropomorphized version of the scenario – Hudson was leaving me presents! 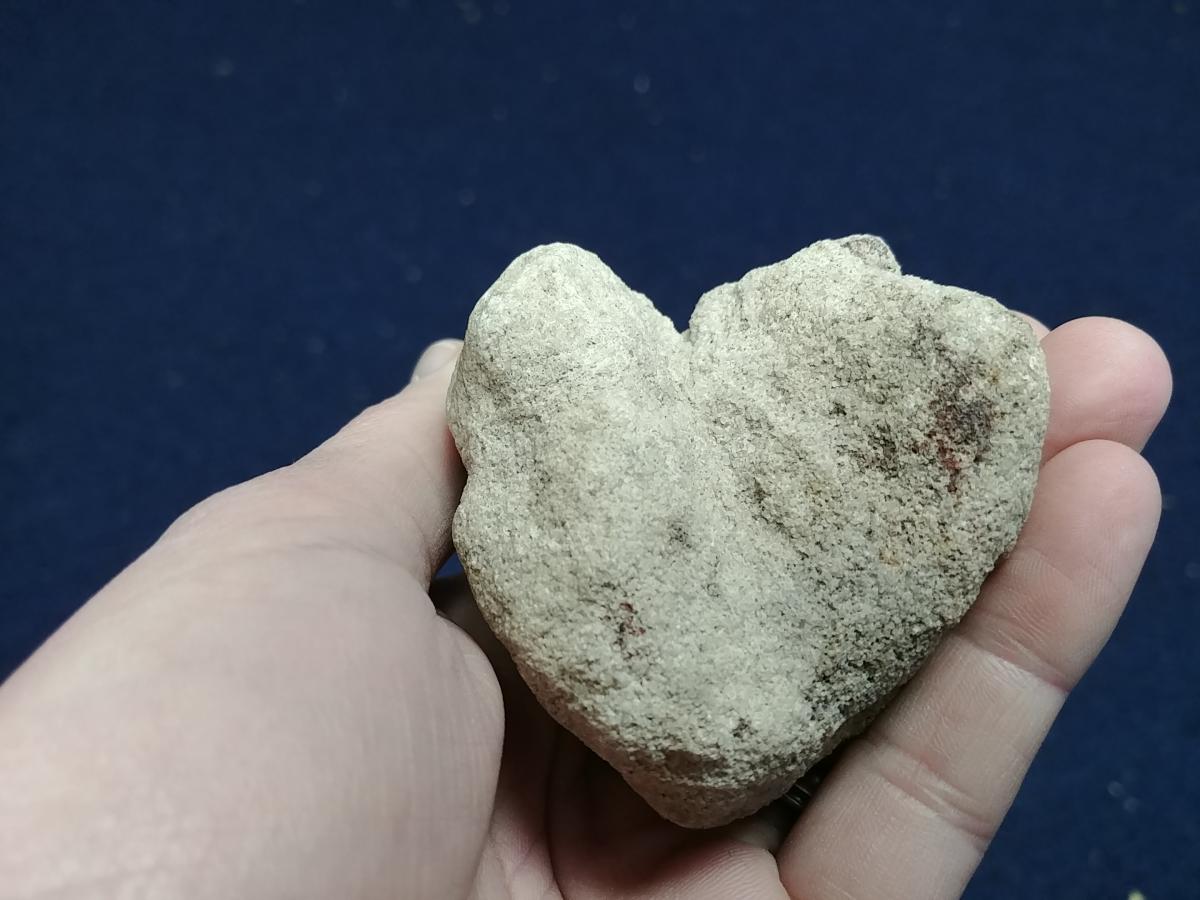 Now that Hudson is in his new education enclosure, he still leaves me presents – I made sure to put a variety of rocks in his new place, so he could choose to move them around, or give some to me if he liked. Of course, I always keep what he gives me – and I’m building up a nice little collection! Every day, I look forward to working with him – and seeing if there are any “gifts” from my new friend. 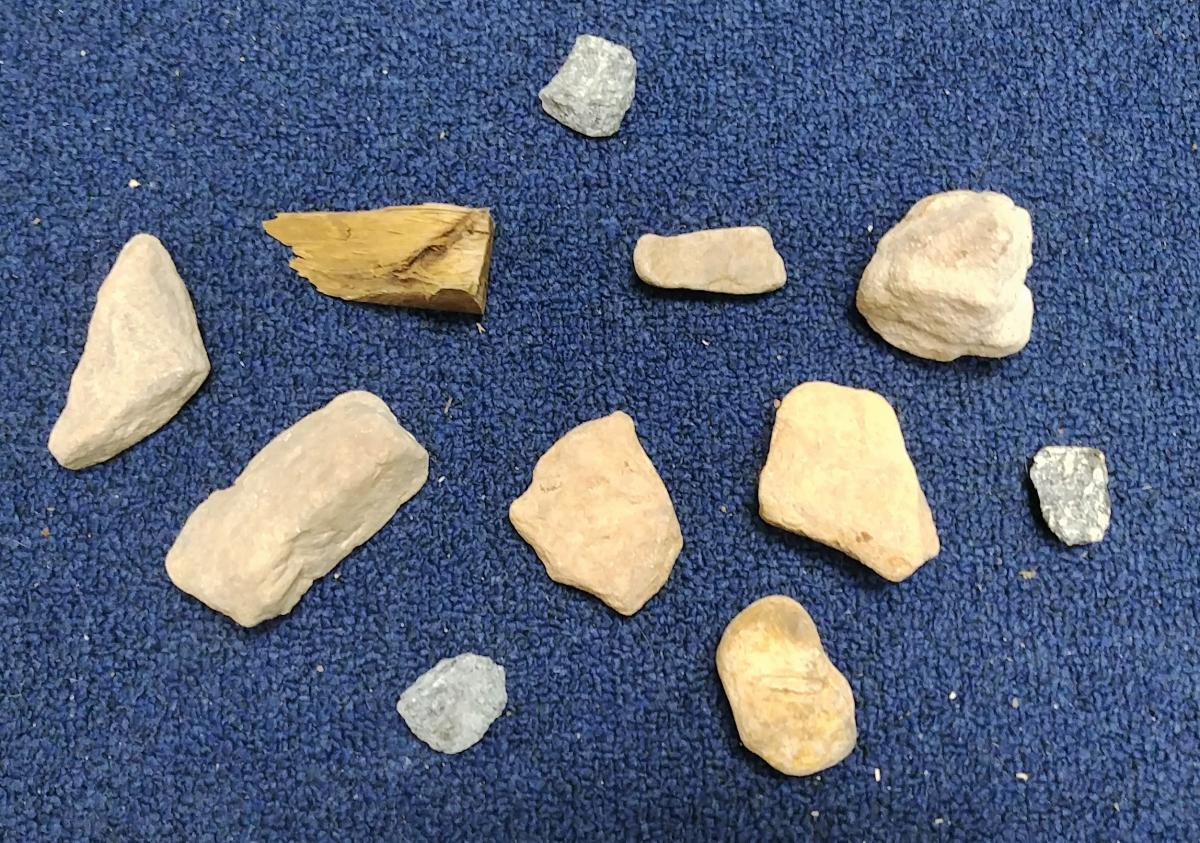 As I’m reflecting on 2018, I feel like I can’t not mention our terrible November ice storm. Going through that experience and seeing Maggie’s smashed enclosure was memorable in all the terrible and traumatic ways. But, the one good memory I will take from that situation is how our team pulled together in a crisis.

As everything was literally crashing down around us, everyone dropped what they were doing to spring into action – getting crates set up, grabbing towels and perches, and bringing in animals. Every time I turned around, someone was there to say, “What do you need?” Everyone was so ready to help – the animals and each other – and that made the experience memorable in all the good ways.