It’s time to look back on 2013! Check our blog between Christmas and New Year’s for a variety of stories and memories of 2013 from the staff, students, and volunteers of the Wildlife Center.

As I think back over all of the events of 2013, I have a hard time pinpointing a single memorable event. What I think stands out to me this year is the growth of our technology – and the pure fun of sharing it.

The past few years at the Wildlife Center have been nothing but growth when it comes to technology. The Critter Cams and moderated discussion were put in place in 2011 … we had a major website overhaul in 2012 … and this year, we’ve just seen everything expand and develop even more.

The Center’s outreach department is responsible for public education and community involvement, which means we focus on sharing a lot of the Wildlife Center’s stories – in person at programs and events, through our website stories, and through the Critter Cams and moderated discussion. I seriously can’t imagine a more fun job – basically, one of my responsibilities is simply to share the Wildlife Center’s stories. The technology that we’ve continued to develop this year has made it so much easier – and more fun! 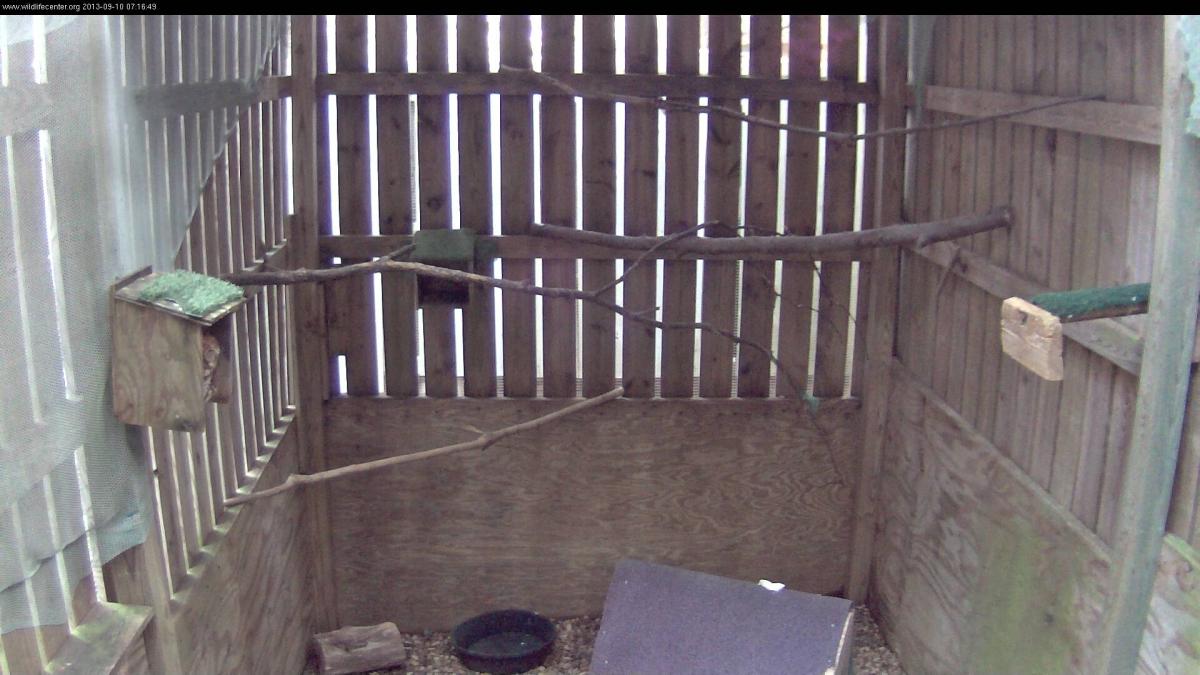 At the start of 2013, we had nine webcams in place – truly impressive! Over the course of the year, we’ve been able to add six more cams to that network. Some of them were a part of the great Black Bear Complex fundraising, one was purchased with a grant, and another camera [the “FeatherCam”] was purchased by one of those rapid “drive by” fundraisers on the Center’s moderated discussion.

Over the past year, I’ve become more adept at installing the newly configured cams – another one of those odd tasks that contributes to a diverse job 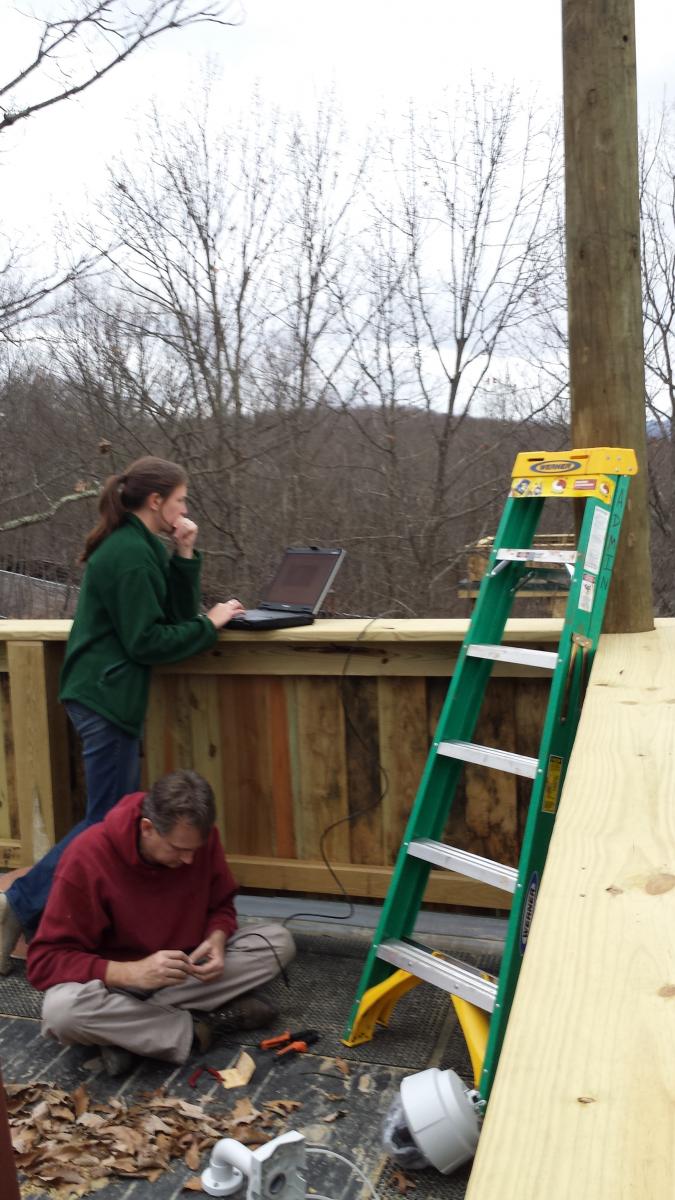 description. Having a brand-new camera placed in a new location is so exciting – not just so that we can watch another patient at the Center, but because I know how thrilled our Critter Cam family will be. I love that moment of first seeing the cam footage of a newly installed cam and thinking, “the viewers are going to LOVE this!” The afternoon that Kurt, Dr. Dave, and I hung the two new Bear Complex cams was so exciting, I could hardly stand it! Those that know me on the Center’s moderated discussion know that I like to “tease” a bit when I have new information – in all honesty, I think I’m just prolonging that feeling of excitement. It’s just so fun to share good news.

The other new little gadget that we added to our repertoire this year was the GoPro Hero3 cam. This was purchased after another a very rapid-fire fundraiser, started by a good friend of the Wildlife Center. The GoPro has been such a fun addition, and it has helped us share stories that we never would’ve been able to capture otherwise. The GoPro’s very first video was of some of our young Black Bear cubs – and as you can see from the video, we definitely needed a hands-free way of recording the feeding sessions if we were going to be able to share those!

As I first watched the recorded footage and started editing, that was another incredibly exciting moment – because I just couldn’t wait to share it with other people. I’m fairly sure that anyone within a 20-foot radius of my office could hear me exclaiming to myself – “This is SO good! I can’t believe this!” [I tend to talk to myself a lot when I get excited.]

We continued to do a series of bear feeding videos on the GoPro – each one more fun that the last. Throughout the spring and summer, we managed to capture a wide variety of release videos, footage of our education animals, a fawn catch-up, and more. You can see all of these videos on the Center’s YouTube channel.

So, what’s in store for 2014? Well, I’ll just say that I have a few “tech-y” projects in various stages of production. I also have a few more ideas on the back burner ... things that I think you’ll really enjoy.

Post-script: Days after writing this blog entry, we held our ribbon-cutting and dedication ceremony for the Black Bear Complex. What occurred that day ranks at the very top of my best technological moments of 2013!

Outreach coordinator Raina and I had been scheming about streaming a live event through our GoPro camera for several months – we knew it could be done, we just had to see if we could manage to figure it out. We spent the day before the ceremony wading through tutorials, fiddling with the GoPro on several computers, and pulling our hair. We got excited … we got frustrated … and toward end of the day, we had made some headway, but were mostly convinced that we couldn’t make this happen for the dedication ceremony, because we didn’t have a much-needed cable to drag into the middle of the bear complex.

By the end of the day, IT Guru Kurt hinted that he might be able to get us that cable … and I spent the rest of the night dreaming about us pulling off this live streaming event. I turned to Raina to keep my hopes from getting too high, but she was just as excited as I was. I’m fairly sure I dreamed about it that night … and I woke up early on December 17, eager to get to work to see if we could pull this off.

By mid-morning, Kurt was at the Wildlife Center and was working on getting us what we needed. About 45 minutes before the ceremony, we had our 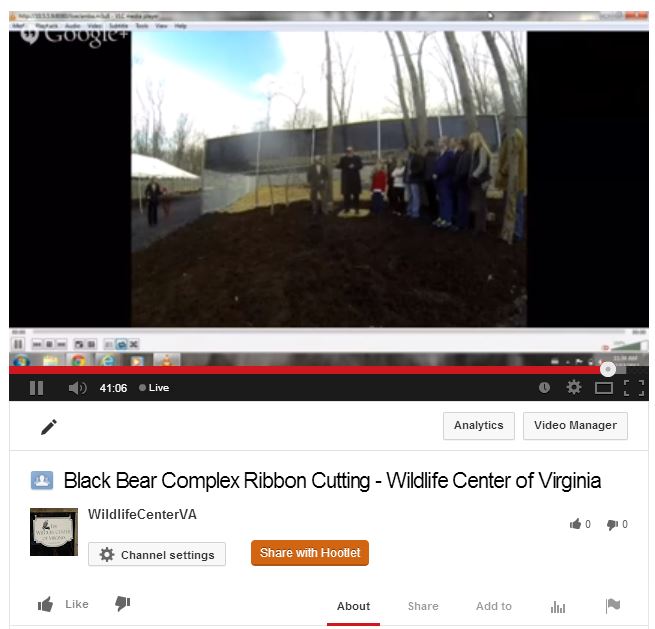 important cable at the bear complex. I was beside myself with excitement – I could literally not sit still when I realized that we were going to make this happen! At 11:00 a.m., as the ceremony was starting, we were able to stream the events live through the GoPro camera, through our YouTube channel. It was a proud moment.

We still have some learning to do as we figure out how to improve the set-up – but we look forward to using this technology again to share even MORE events online. It’ll only get better from here!