Being a Director of Outreach: Amanda Nicholson 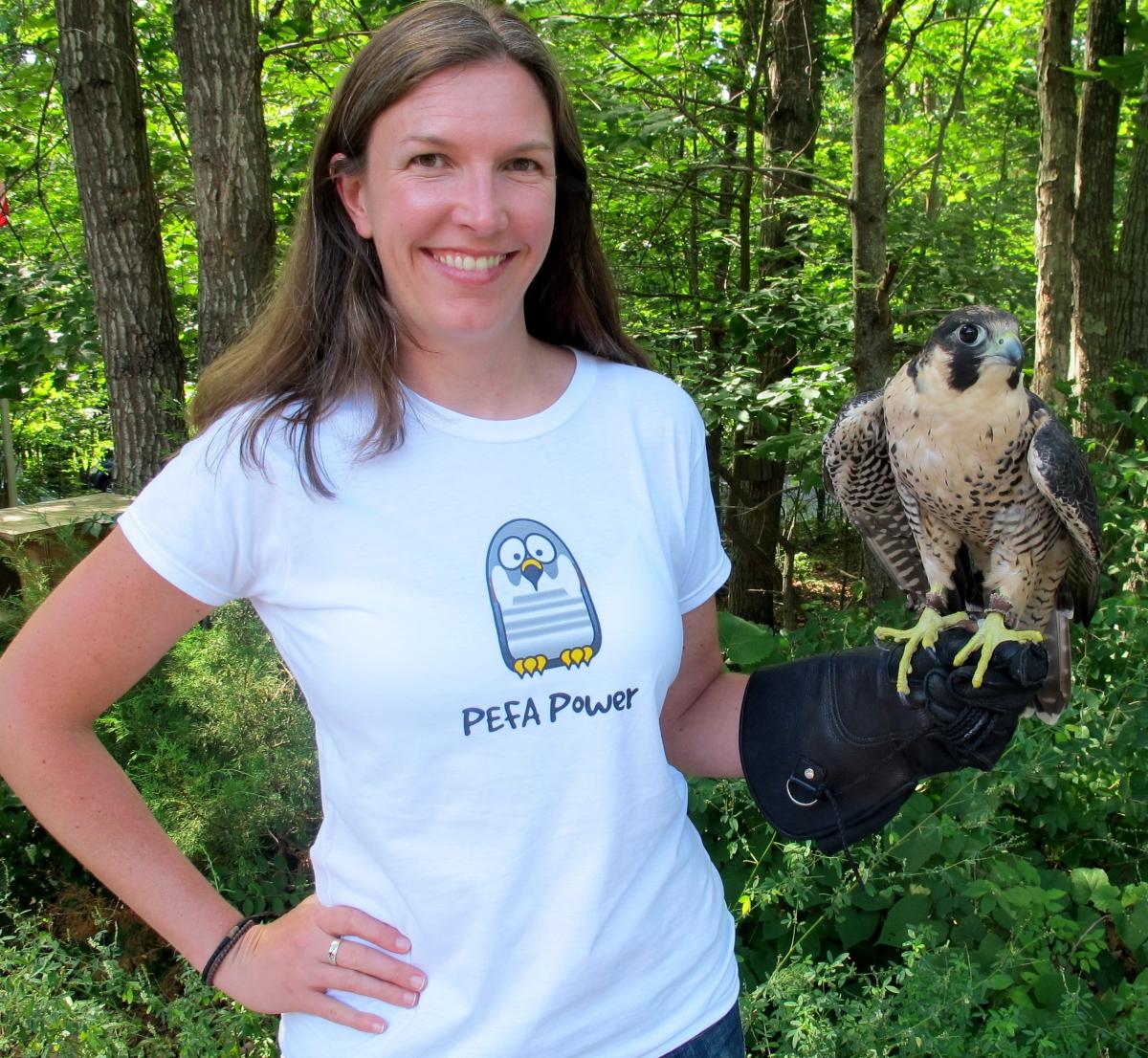 Amanda Nicholson has worked at the Wildlife Center since June 2001. As the Director of Outreach, Amanda oversees the department responsible for public education and community involvement.  Amanda manages the Center’s ever-changing website, maintains the “Critter Cams” and moderated discussion, organizes the annual Call of the Wild conference, helps plan various events, and works with the Center's team of education ambassadors. Amanda is also an associate producer of the Untamed series.

See Amanda at work in our 13-episode TV series, Untamed!

When and how did you join the Wildlife Center? Did you always work in the outreach department?

I joined the Wildlife Center in 2001 – I found out I got the job just two days before I graduated college! My initial position was a split one – I worked three days a week as a wildlife rehabilitator, and was the weekend front-desk coordinator. My various roles and responsibilities changed during my time here, and in 2010, I was given the opportunity to be the director of the newly formed outreach department. Looking back over the 18+ years that I’ve spent here, I couldn’t have imagined my position would grow into what it is now!

What’s your favorite kind of raptor to work with as ambassadors? Why?

Falcons! I don’t know if it’s a general species thing or that I just really lucked out with the three falcon individuals I’ve worked with and helped train, but they are incredibly smart, funny, inquisitive, confident birds. Also, I love their ridiculously long toes. 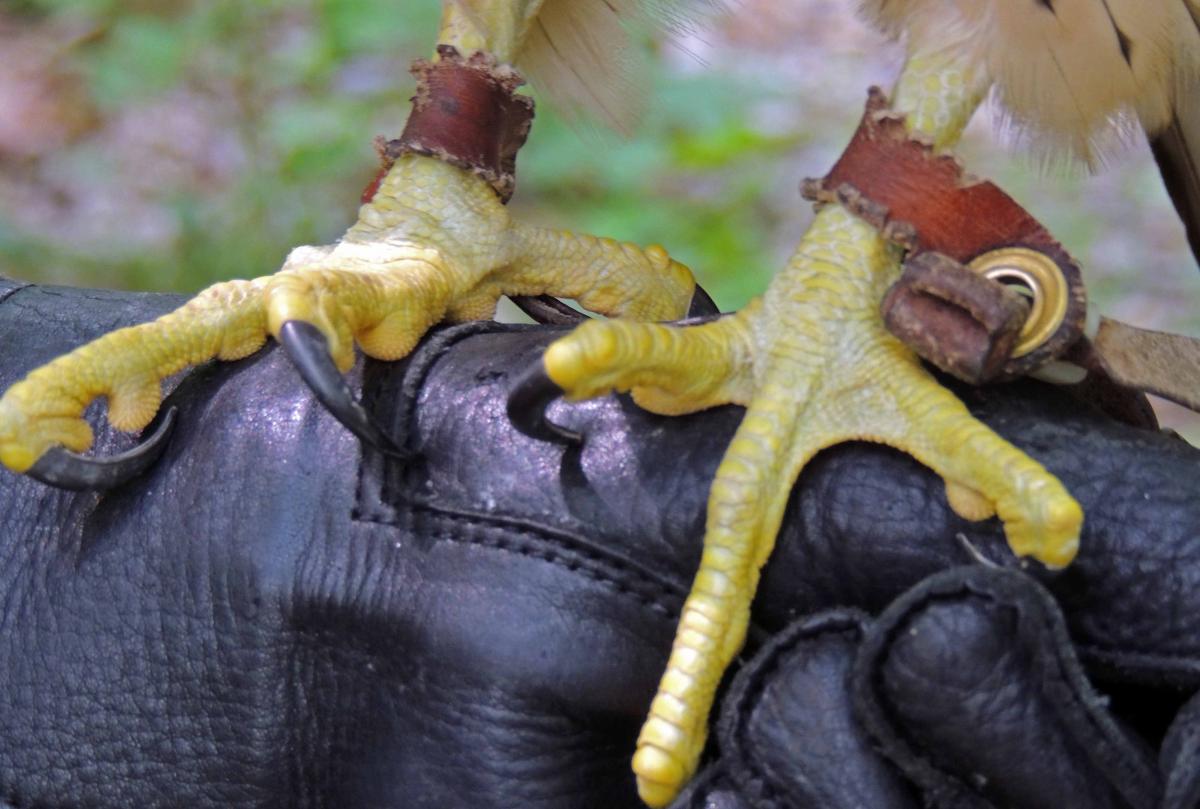 Can you tell us how education raptors usually get their names at the Center? What are the most meaningful names to you?

We generally want an ambassador’s name to be meaningful and help tell that animal’s story. The name might reflect on a component of the animal’s natural history, or perhaps reflects on the animal’s rescue location or situation. Sometimes the staff comes up with a good suggestion that feels right; sometimes we come up with a “short list” and put it to an internal or public vote, and other times we’ve had a naming contest for elementary school students.

Hudson the Gyrfalcon was a fun bird to name; the outreach staff came up with a few suggested names and then all staff voted. I was partial to Hudson, as I was really drawn to a name that had a geographic link to this species – Hudson Bay is in Canada and is within a Gyrfalcon’s subarctic range.

By far though, the most meaningful name to me is Maggie the Peregrine Falcon’s – we auctioned off Maggie’s naming rights at our 2014 auction. I was nervous since I had worked with this bird in training and gotten a strong sense of who she was; I just didn’t want her to end up with a weird name. Unbeknownst to me, a whole group of people pooled their money together and got into a bidding war with someone else at the auction; the group of people “won” the naming rights at more than $9,000. They promptly ran to the microphone to explain that this was a group effort to win the rights, which in turn, were to be gifted to me – that I should have the right to name her. I was completely overwhelmed and very touched. 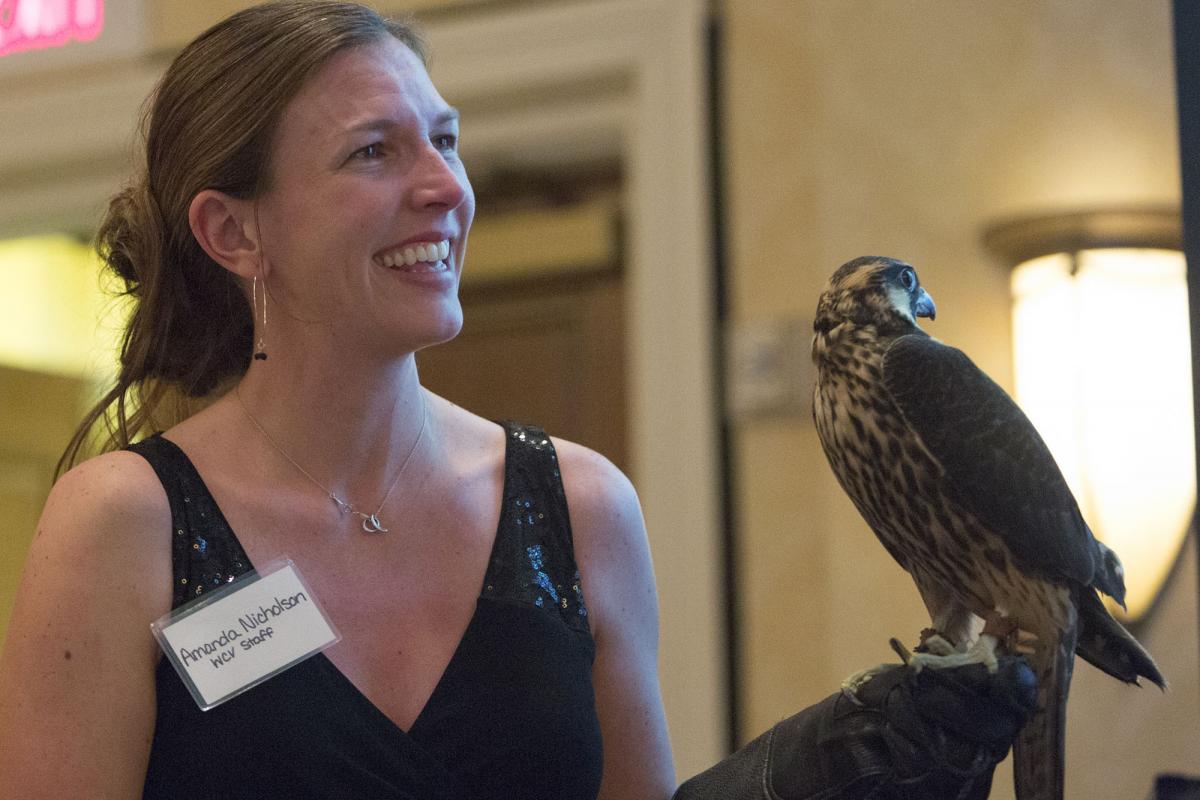 After about a month of deliberating, I decided on Maggie – named after Maggie L. Walker [1867 – 1934], who was a famous Richmonder (where Maggie the falcon hatched). Maggie Walker was the first woman president of a bank, a well-known teacher, and an advocate for people with disabilities. I wanted a name with strong Richmond roots since Maggie’s parents were a well-established pair and did so much to contribute to the recovery of Peregrine Falcons in Virginia. Plus, the name just felt right.

What fact do you most like sharing about the falcons and hawks at the Center?

Many people (particularly kids!) already know that Peregrine Falcons are the fastest animal on Earth and can reach speeds of more than 200 miles per hour when they are in their hunting “stoop”. But I’m continually amazed by their high-speed hunt. When you really stop and break that down – the pure aerodynamics of how peregrines are built, and taking into account their insanely acute eyesight that lets them keep focused while chasing a moving target – it’s all amazing. There’s even a bit of confusion still as to how peregrines strike their prey in the air – some sources have suggested they “punch” it, others, after technology has allowed for more high-speed video capture, say that they “slap” it with an open foot. I love it when humans don’t know every last thing about wildlife yet, and there are still some mysteries in the world.

What advice do you have for people who want to work in public outreach?

Get an internship! That’s good advice for whichever field you want to work in – an internship will give you real hands-on experience in a way that will really let you assess what you like (or don’t like) about a job. You might just surprise yourself.

For public outreach specifically – develop strong writing skills. Practice, proofread, install a grammar-checker on your computer, and practice some more – and then always, always have someone proofread your writing. The ability to write well is an incredibly valuable skill!