Being a Bat Rehabilitator: Leslie Sturges 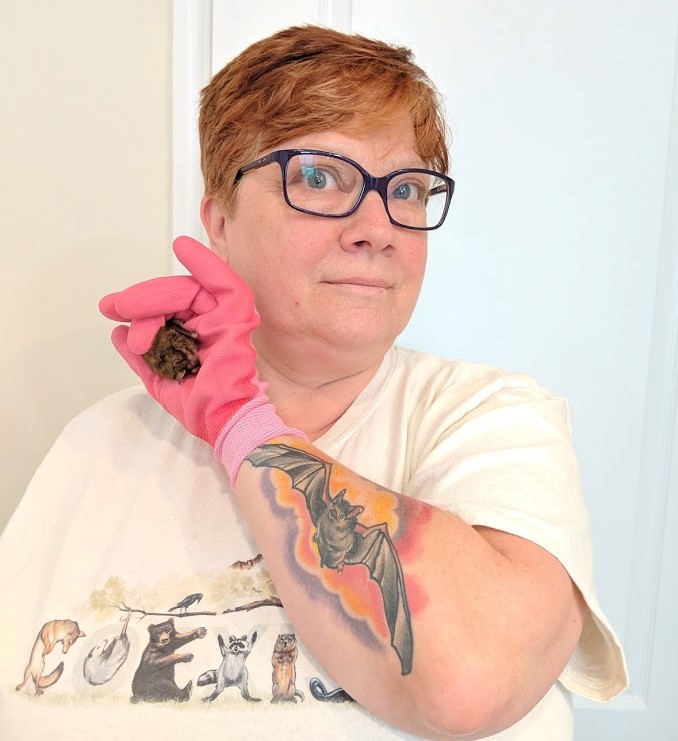 Leslie Sturges is a permitted wildlife rehabilitator and educator and is the president of The Save Lucy Campaign. In 2001, Leslie founded Bat World NOVA, a satellite rescue center of Bat World Sanctuary, so that she could pursue a lifelong love of bats. Since then she has cared for more than 800 bats at her facility and has maintained a colony of bats that visit schools and other venues to educate the public about bats and wildlife conservation.

What’s your background? How did you become a permitted bat rehabilitator?

I wanted to work with bats and I didn't want to go back to grad school. Rehabilitation seemed like a great way to do it. Almost 20 years ago, Bat World Sanctuary offered "bat boot camp" to get people up to speed for bat rehabilitation and I signed up right away! It was a wonderful experience for someone who'd never even held a native bat before. And here I am.

What has surprised you the most about working with bats?

Bats can do everything any other mammal does, plus fly! And most of them do it in a very tiny package.

If you could get the general public to remember just ONE thing about bats, what would it be?

Bats aren't scary! Don't grab them or poke them in the nose and you'll be fine.

In Episode Nine, you shared an amazing story about being a bat midwife! Surely this was one of your more memorable “bat moments” – but aside from that, do you have a favorite case or story?

There are so many! There's Mooch, one of our education ambassadors who was accidentally "released" by a caregiver. I searched high and low for him. One day I was on the phone talking about how sad I was, and I glanced at a pile of clean laundry. There he was, echolocating at me like crazy. I'm sure he had been trying to get my attention for days! He was fine and lived with us for 13 years.

Another one -- back when we had Little Brown Bats in the area, a bunch fell out of a bat box in a local park and we took them in for care. Because we knew White-nose Syndrome was close by, we gave them their own flight cage when they got old enough to go outside. They are very, very smart bats. They kept getting out. I would put them back in every morning because they'd be lined up along the outside of the flight cage.

One of them got out and did not stay on the outside of the flight cage. I knew she was there because she would fly around my legs and around my head whenever I was outside after dark. I think she was showing off.

When the time came to release everyone, I gathered up all the ones who were still inside the flight cage and transported them back to the colony that they came from. I thought "that's really too sad for the little lonely one. She's all by herself now."

The next day I brought in the bat laundry from the clothesline outside. I was folding it up neatly, and one of the towels started yelling at me. I carefully unfolded the towel, and there was the little lonely one. She got a ride back to the colony the next day!

Oh, and one more!

There was an old Little Brown Bat colony in a park in a very urbanized setting. They were there because an old house had been taken down for development, and some Boy Scouts had installed bat boxes for them. The bats moved into the boxes, and the colony housed approximately 1,000 Little Brown Bats.

There was a really hot day in late May when I was checking on the colony, and I realized that a bunch of baby bats had fallen out of the bat boxes. They got stuck in a really nasty invasive vine called mile-a-minute. I was picking little baby bats out of this awful vine and all the poison ivy. We tried to return them to their boxes that night after we made sure they weren't seriously injured, and the mother bats were flying all around us and landing on these little tents where we had temporarily housed the babies. They clearly knew that those were their babies. We set the pups up in temporary bat boxes, but when we went back the next morning, they were all still there. We decided to take them back because we thought the mothers had abandoned them. Knowing what I know now, the mothers were probably feeding them in place, but the more you know ...

When the pups were old enough to go back to the wild, we took them back to the colony. We set them up in little temporary bat boxes and we put out food and water for them. We moved them in the middle of the day, thinking they would stay in their temporary bat boxes until after dark. But no! They started flying out all over the place. I was panicking! I just knew they were going to be eaten by crows and Blue Jays. But my husband said, "hold on; look!"

The adult bats were coming out of the big bat boxes and were collecting these crazy little juveniles who were flying all over the place. They ushered them back into the real bat boxes.  It was awesome. I don't know whether they knew those were their kids or whether they just knew to get the silly ones inside before they attracted predators, but either way, it was so cool to see them gather the new ones and lead them back to the colony. What’s your advice for people who want to work in the field of wildlife rehabilitation?

Know your species and pay attention to the natural world! I think you need to have a deep love of your local ecosystem, not just baby animals, to be a good rehabilitator. So take courses,  join a master naturalists chapter, go to conferences. Never stop learning!