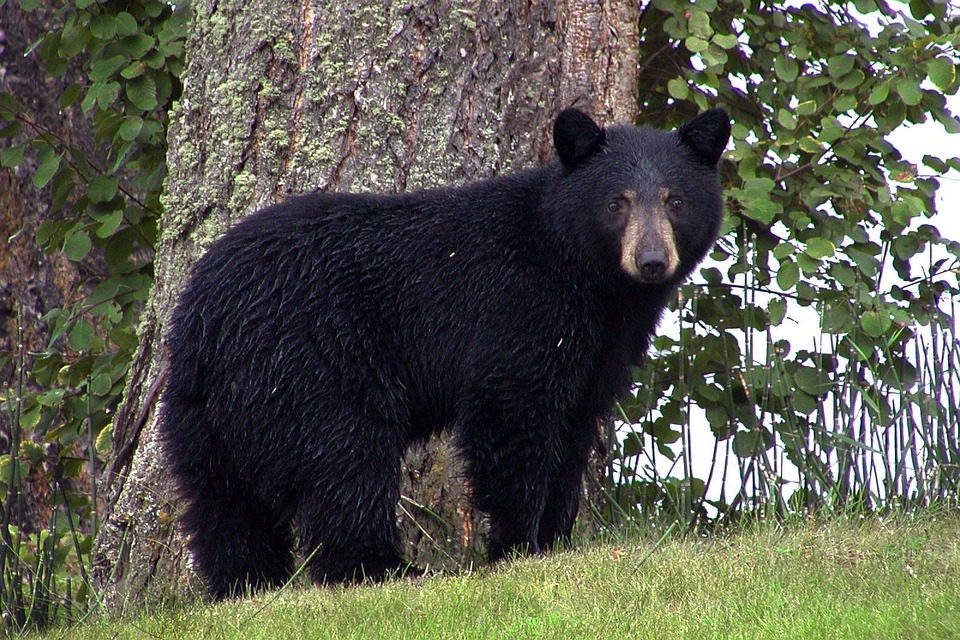 If you live in Virginia, you live in bear country! Black Bears are found throughout Virginia, and may even be seen in some suburban and urban locations. The bear population is healthy with an estimated 17,000 bears in the state. Increasing human development means that people and bears may come into more conflict; while bears are typically shy and avoid humans, we all have a shared responsibility to keep bears and people safe.

Bears in the backyard: With both abundant bear and human populations, bears can live quite close to people in a variety of residential settings. Most of the time, people may not even be aware that bears are nearby; other times, human food and trash will prove too tempting for bears to ignore. The most common attractants are unsecured trash, birdseed, and pet food. Bears that learn to associate food with homes and people can cause property damage and distress to homeowners. Fortunately, most of these common conflicts have simple solutions and if implemented quickly, can be resolved peacefully.

If a bear has successfully obtained food from your yard, it will likely be back to try again. It will take several failed attempts for the bear to get the message and move on in its search for food. Be persistent, and ensure all neighbors are being bear aware and preventing access to food.

If you (and your neighbors) continue to allow bears to raid trash, bird feeders, and pet food bowls, the bears may start to lose their natural wariness of humans. Remember, never feed a bear – intentionally or unintentionally. These bears can pose safety concerns; it’s up to all of us to work together to keep bears and humans safe.

Encountering Bears in the Wild: If you enjoy the outdoors by hiking and camping, you may encounter a bear. In almost all cases, the bear will hear/smell you and will leave the area before you even notice it! However, there are some precautions you can take to stay safe. 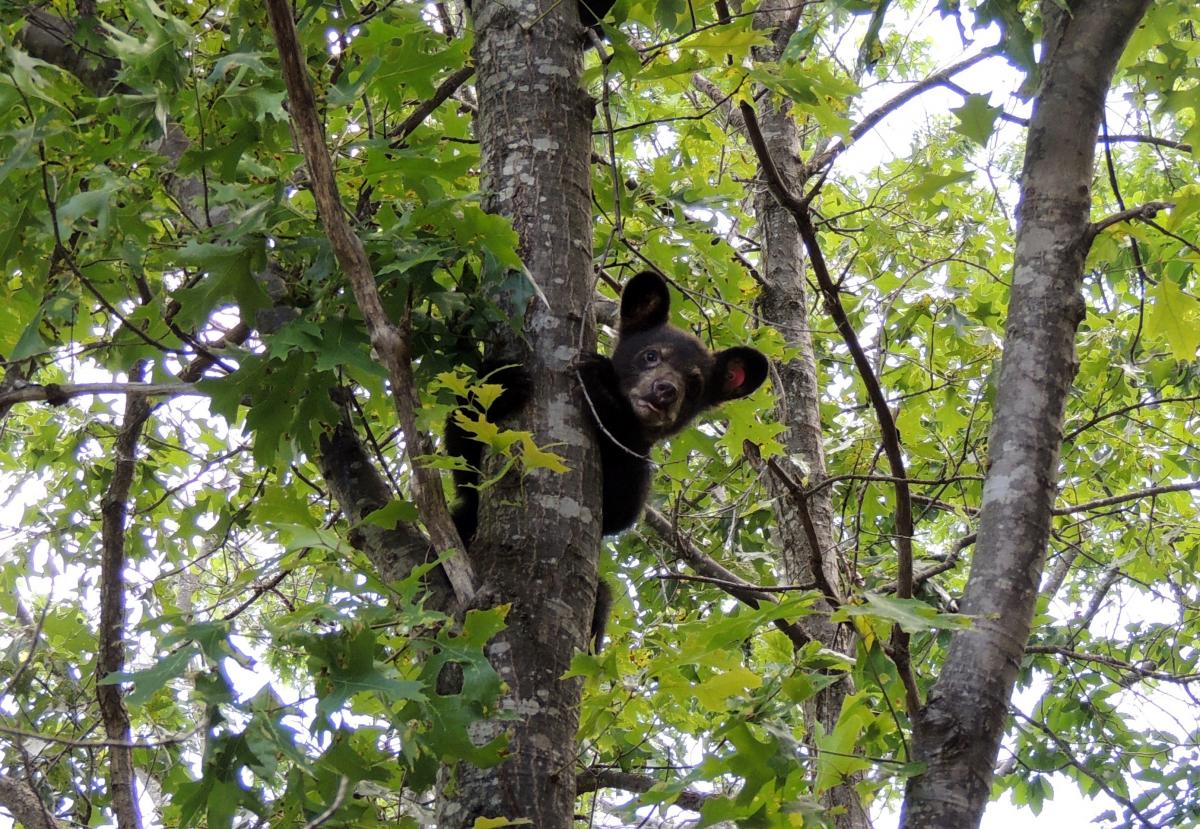 Hiking: If you’re concerned about encountering a bear while hiking, there are a few precautions you can take to avoid even seeing one. Hike with others, make noise while you hike so bears hear you first, and hike during the day – not at dawn and dusk. Bear spray can also be carried while hiking.  If you do see a bear:

Camping: Keeping food safe and away from bears is an extremely important part of camping in bear country. It will not only make sure you get to eat your own food, but it also helps keep bears safe and appropriately wary of people.

Keep Dogs on a Leash: According to animal behaviorist Dr. Stephen Herrero, “Canids and ursids have an ancient rivalry. This evolved conflict can quickly spill over to involve humans if they are nearby.” Studies have shown that more than half of bear attacks involve dogs, and in the majority of cases, the dogs were running loose at the time of the attack and drew angry bears back to their owners.

While many people think that mother bears are more likely to attack, a sow’s first line of defense for her cubs is to send them up a tree to safety. Since 2010, only 25 percent of bear attacks have involved a sow with cubs; of those attacks, more than 90 percent involved a dog. Sows protect their cubs from the natural threats of coyotes and bobcats and are more likely to directly confront dogs that they perceive as a threat. Owners get involved in conflicts when dogs provoke bears and draw them back to their humans.

When hiking or camping in bear country, always keep your dog on a leash.

Harassment: When bears are initially sighted in an area, loud harassment techniques will often work to startle bears. Bang pots and pans loudly and shout from your house to encourage bears to move along. For bears that are more persistent, shooting paintballs at a bear’s rump will not harm the bear, but will help deliver the message. Remember, all food attractants need to be removed from an area before harassment techniques will really work.

Get creative and add some creepy visual deterrents to a problematic area [note: this will likely deter human neighbors too].

Electric fencing: For areas that have more regular bear visitors, homeowners will likely need to take the time to install electric fencing around affected areas. Fencing will require more work at first but is inexpensive and extremely efficient. Different fencing techniques can be used around dumpsters, gardens, fruit trees, and beehives.

The Department of Game & Inland Fisheries has plans for creating your own electric fence as well as an “unwelcome mat”.

As with any “nuisance” wild animal, translocation may seem like a nice option for both homeowner and animal, but quite simply, doesn’t work. Removing an animal from an area doesn’t take care of the actual problem, which is typically due to food attractants. If one bear is removed, another will simply take its place and continue to cause problems.

Studies have shown that relocated bears travel hundreds of miles and can return to a known food source within a few days. Bears that are attempting to return “home” are at an increased risk of being hit by cars; resident bears may also kill new bears translocated to their territory.

There is no benefit – to people or bears – of translocating bears that are simply raiding bird feeders or unsecured trash cans. We all have a shared responsibility to be bear aware; secure trash and remove food from your property to help keep bears safe and wild. Remember, it’s illegal to deliberately feed bears on public or private lands – this includes repeatedly allowing bears to eat replenished bird feeders and trash.

If you Find a Baby Bear 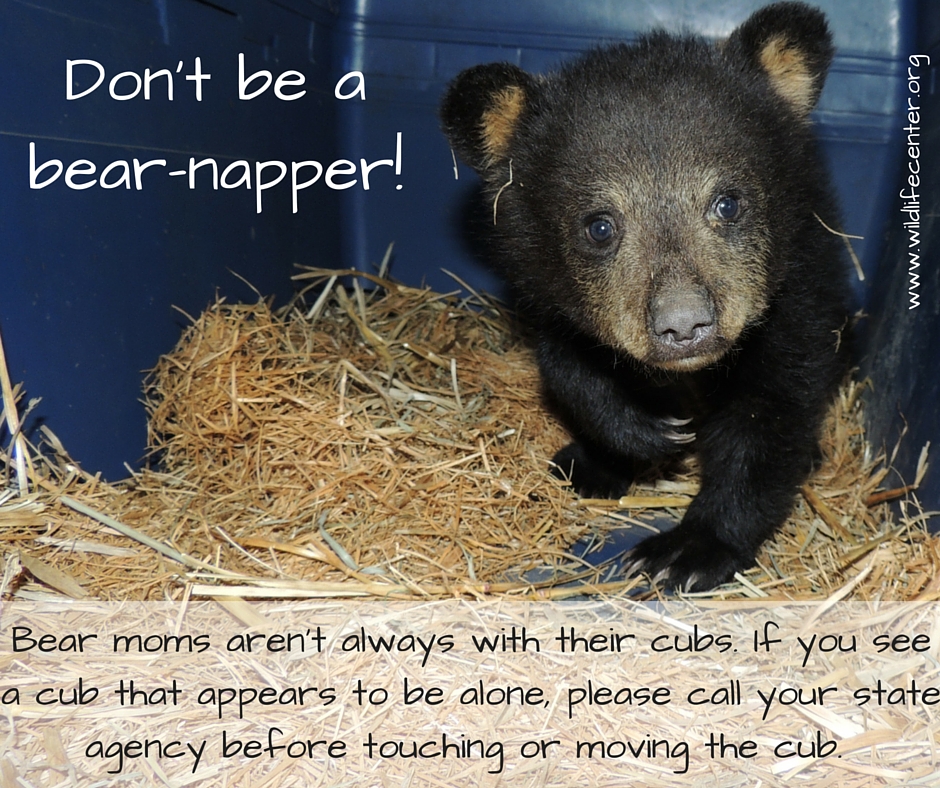 In Virginia, pregnant sows typically give birth to cubs in December – February, with the median birth date of January 17. Sows and cubs typically remain in their winter dens together until April or May, when the cubs are old enough to travel with their mothers.

One of the first things sows teach their cubs is to climb a tree to avoid danger. If a sow is nervous, she’ll send her cub(s) up a tree and will leave the area until danger has passed; she’ll then return to gather her cub(s), typically at dusk or after dark.

Cubs stay with their mothers until they are about 16-18 months old. Yearlings no longer need their mothers to survive and leave them in the spring. Many small bears that are spotted in the spring are actually yearlings, not cubs – it’s important to appropriately identify the age of the bear to determine if it needs help. Taking a photo and sharing with appropriate officials can help accurately identify cubs versus yearlings.

If you see a cub by itself, don’t pick it up! Leave the area and check back the following day to see if the cub is still present. Give the sow plenty of time to come back and collect her cub; don’t be a bear-napper! If you do see the cub the following day, or if you find an obviously injured cub, call the Department of Game and Inland Fisheries.

What NOT to DO

It’s important that we all do our part to keep bears wild.

More Info on Living with Bears

The Department of Game & Inland Fisheries: Living with Black Bears