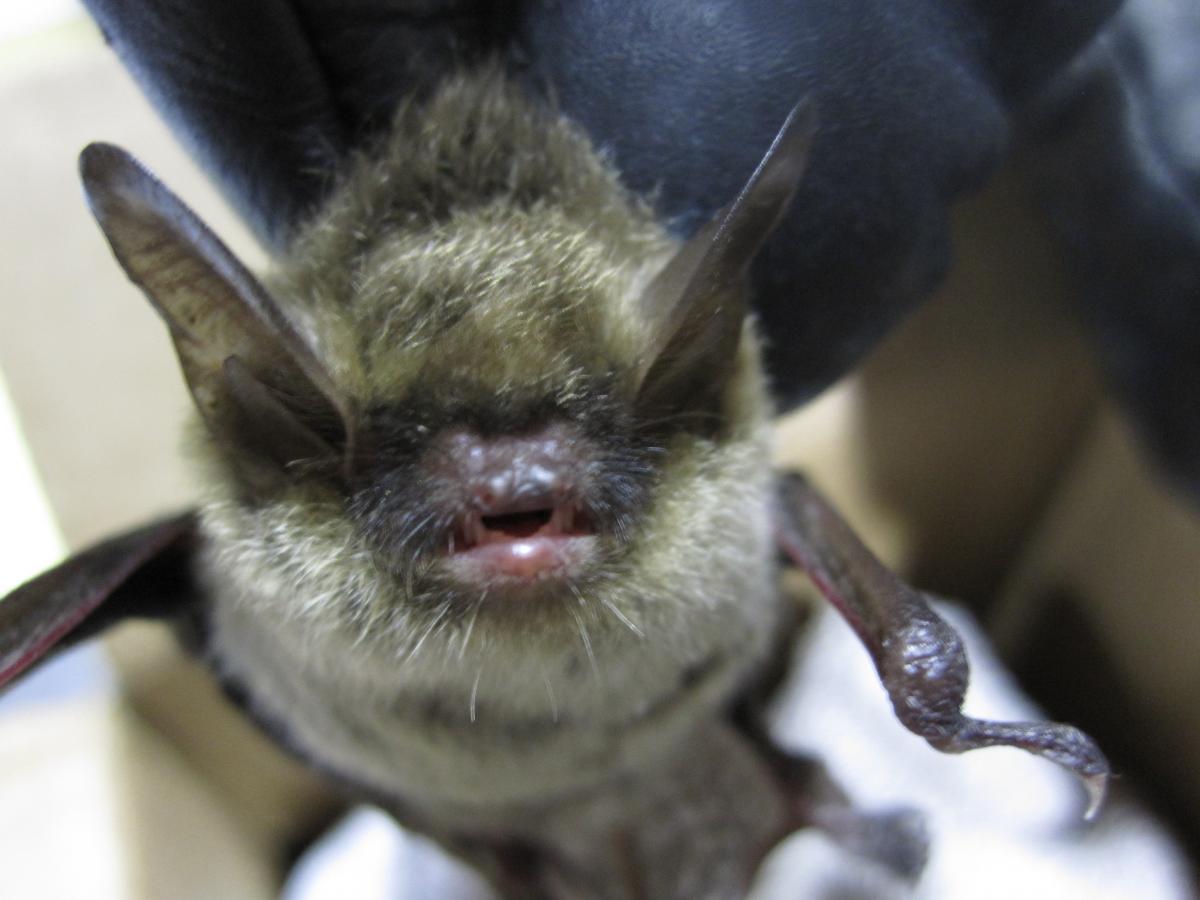 Bats can be excellent nocturnal neighbors – the common bats in Virginia eat between 50-100 percent of their body weight each night in insects. Some popular myths may cause people to fear bats, but these flying mammals are not blind, will not suck your blood, and don’t want to become entangled in a human’s hair. They do swoop down when flying, and may be after the insects that are attracted to you -- some bats can eat as many as 600 mosquitoes in an hour!

Bats in Attic: Bats can only enter your house through existing openings a half-inch or greater. They do not make or enlarge openings into the house. The entrances they use are high on the building, typically near chimneys, where roofs meet walls or dormers, or under loose shingles or siding. In the winter, bats may enter the house at the basement or soil line.

Bats often roost in houses for years before homeowners notice. Bat entrances will often become discolored due to the body oils of the bats as they enter and exit.  Another sign of a popular bat roost is guano [feces] that accumulates on the entrance wall or on the ground. Bats are nocturnal, so if you are attempting to spot their specific entrance, observe the suspected area just before sunset to about 30 minutes after sunset to catch them in action.

Permanent physical exclusion is necessary for any bat removal [see exclusion section below].

Bat Inside the House: Always wear leather gloves when working around a bat. Remove pets and small children from the room, and close interior doors to confine bat to one room. Never handle a bat barehanded.

In the main living space:

If you see a bat fly into your house through a door or window, work on confining the bat to a single room and open a window or exterior door. Stand still or move slowly and deliberately – chasing a bat only exhausts the human! The bat will likely fly in a U-shape, swooping lower in the center of the room and flying higher near the walls. Stay close to a wall and allow the bat some time to discover the exit out of the house.

If the bat can’t exit on its own, it may be best to wait until the bat lands, then catch it for removal. Bats will likely land on something from which they can hang – curtains, plants, upholstered furniture or other fabrics. Wearing leather gloves, cover the hanging bat with a cardboard box or small trashcan, and work a stiff piece of cardboard under the container, trapping the bat inside. Release outside at night.

Please note that most bats cannot take off from the ground, so hold the container and tilt away from you or allow the bat to climb a tree or other vertical surface away from your house.

Extra caution should be taken with bats found in a bedroom since in many states, bats are considered a high-risk rabies species. Because bat bites can be small and go unnoticed, health departments may consider a bat found in the bedroom to be a possible exposure. While bat bites typically hurt, small children may have trouble communicating this, and bites may go unnoticed for heavy sleepers, or those who are intoxicated or otherwise incapacitated. If you find a bat in your bedroom, contain the bat and call your local health department for advice.

Bat in a Woodpile:

Some bats hibernate inside woodpiles during the winter and may inadvertently be brought in the house on a piece of wood. Using leather gloves, place the bat outside at the base of the woodpile as soon as possible. Wear leather gloves to retrieve firewood in the future.

Visual: Moving deterrents such as mylar strips, streamers, pinwheels, or any other object that moves variably may help offer short-term solutions to encourage bats to stop roosting in a specific area. These are best used for night-roosting bats who seek out a spot to hang during part of the night. Deterrents shouldn’t be used in a roosting spot during baby season; they also shouldn’t be used in the winter when bats are unable to find a suitable shelter.

Exclusion: For permanent exclusion, it’s best to consult with a professional who can help determine the best time of year to evict and exclude bats from your specific area. Be sure to research the company to ensure they use humane methods.

The type of bat most people encounter inside their attics are “crevice-dwelling” bats; females and babies often roost in mass colonies. They move around within and between roosts to adjust to changing temperatures. Sometimes they use the same roosts year-round.

Bats should never be excluded during breeding season. Many bat species in Virginia will give birth to one or two pups a season, typically in May or June. For many species, pups stay in the roost until they are about four to six weeks old and can fly well enough to feed themselves. For some species, a mother may hunt with her very young pup clinging to her belly. Mothers can identify her own pup by its squeak.

In general, the best time to evict and exclude bats from your house is in early spring, before breeding starts, or at the end of summer, after babies are grown and before hibernation starts. On any given night, some bats stay behind in the roost and do not fly out. Bats are seeking dark and warmth in an attic, so brightening and cooling their space could make them seek better conditions elsewhere. This approach must be taken thoughtfully; brightening one area of an attic might encourage the bats to simply roost in another area of the attic.

If you’re unable to consult with a professional, Bat Conservation International and the Humane Society of the United States have detailed instructions for “do it yourself” exclusion.

If You Find a Bat on the Ground

Determine if the bat is an injured adult or a young bat pup that has been separated from its mother. 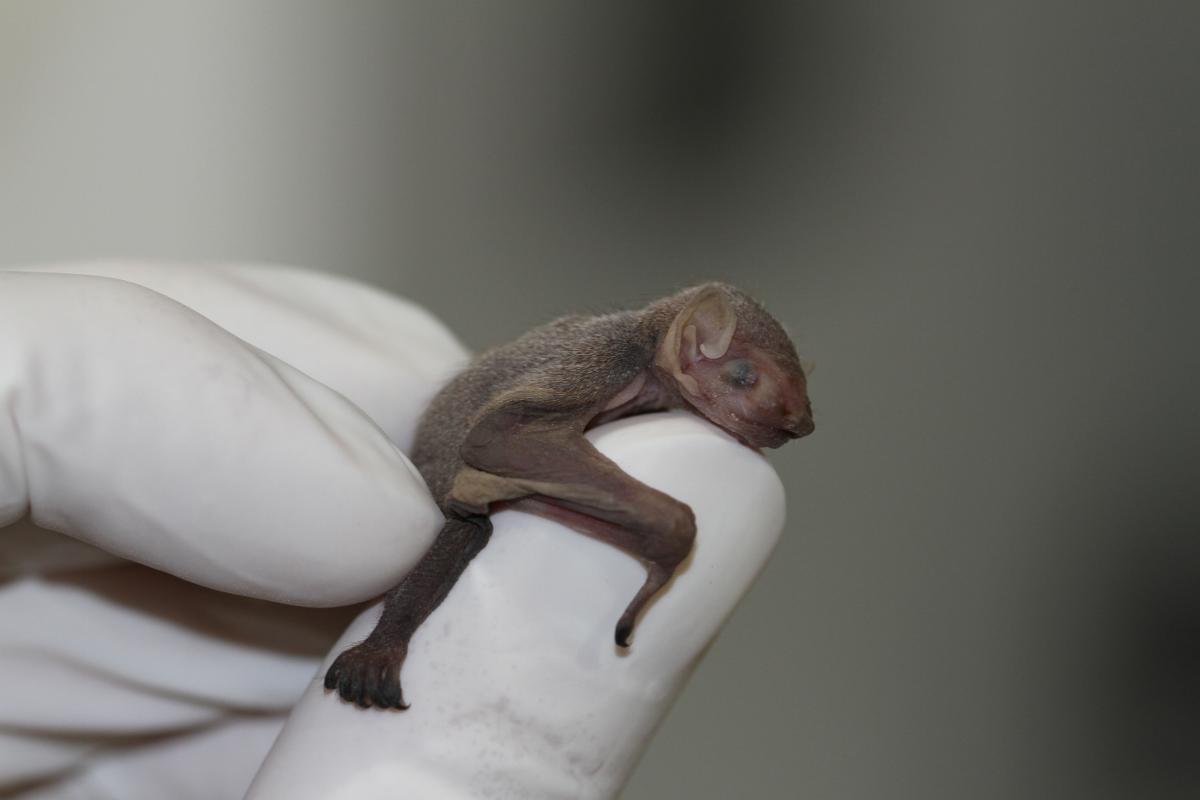 Pups: If the bat is hairless or has very short fur, is unable to fly, and lying under what appears to be a colony entrance, it is a baby and can be reunited with the colony. Use a pool skimmer or long-handled net to lift the pup back to the colony entrance. A healthy pup will be able to climb a short distance.

Parent bats will not recover fallen pups unless the pups are very close to the colony and the mother can sneak out to get them.

If you can see but not reach a colony, protect the pup from sun and predators and hang it in a cloth as close to the colony as possible. If the pup has not been retrieved a few hours after sundown, it needs to be rescued and taken to a rehabilitator. Any pup found alone and away from a colony needs rescue.

Adults: Adults may be on the ground if they are injured, have been disturbed from their winter hibernation spot, or even if a mother is protecting her pup [clinging to her] from a predator attack.

Call a permitted wildlife rehabilitator if the bat:

Use a solid shoebox and poke small holes in the lid with a pencil. Place a rag or small non-looping towel in the box and tape the lid securely so there are no gaps or flaps. Coffee cans (with holes punched in the lid) also work well.

Rabies: In Virginia, bats are a high-risk rabies species. There is no single set of indications that an animal may have rabies; since it is a neurological disease, rabies can manifest itself in many ways. While the stereotypical “furious form” (aggressive behavior, foaming at the mouth) is one manifestation of rabies, infected animals more commonly display the paralytic form of rabies, which is exhibited through lethargy, loss of balance, loss of fear of humans or other animals, and general depression. However, those same depressed signs can also indicate an injury. It’s also important to note that a mammal may have rabies and not yet be exhibiting any symptoms. Never handle a bat of any age without wearing gloves.

Histoplasmosis: Histoplasmosis is a fungal infection; the fungus Histoplasma lives in the environment, often in soil that contains large amounts of bird and/or bat droppings. Because the fungal spores are stirred up when cleaning, use caution if you are cleaning an area after a bat colony has been infected. Wear a dust mask and rubber gloves; spray the feces with a 10 percent bleach solution to minimize dust before cleaning. Wash clothes after cleanup. Learn more at the Centers for Disease Control and Prevention https://www.cdc.gov/fungal/diseases/histoplasmosis/index.html

Our bat neighbors are in serious trouble. White-nose syndrome (WNS) is a devastating bat disease caused by a fungus. Since the winter or 2007, WNS has spread rapidly throughout the United States and Canada. Millions of bats have died from this disease; bat population declines will have serious impacts for the environment and agriculture. Bats need all the neighborly help they can get – and they need us to spread the word!

More Information on Living with Bats

The Save Lucy Campaign

Humane Society of the United States: Living with Bats