In May 2018, Bald Eagle #18-0752 [RR53] was admitted to the Center after she was found down on the ground in Richmond County, Virginia. No fractures or significant injuries were found on the mature female eagle, and after nearly two months of supportive treatment, the eagle was released on Independence Day at Rappahannock River Valley National Wildlife Refuge in Richmond County, Virginia.

Center staff were able to track the travels of RR53 for three years, from her 2018 release to June 2021. Sadly, after a year of silence, the transmitter started relaying days in April 2022, though the data points were all from the same exact location, leading Cellular Tracking experts to suspect the eagle had died earlier in the year. A biologist went to the area and was able to recover the eagle's body.

During the three months following her release, RR53 lingered within a 15-mile radius of the Rappahannock River. The eagle's transmitter was silent for about three months during the fall, though finally checked in again in mid-November, revealing that the bird had traveled about 100 miles west toward Luray. Within a few weeks, RR53  moved east again, and ended the year along the Potomac River, just south of Colonial Beach. 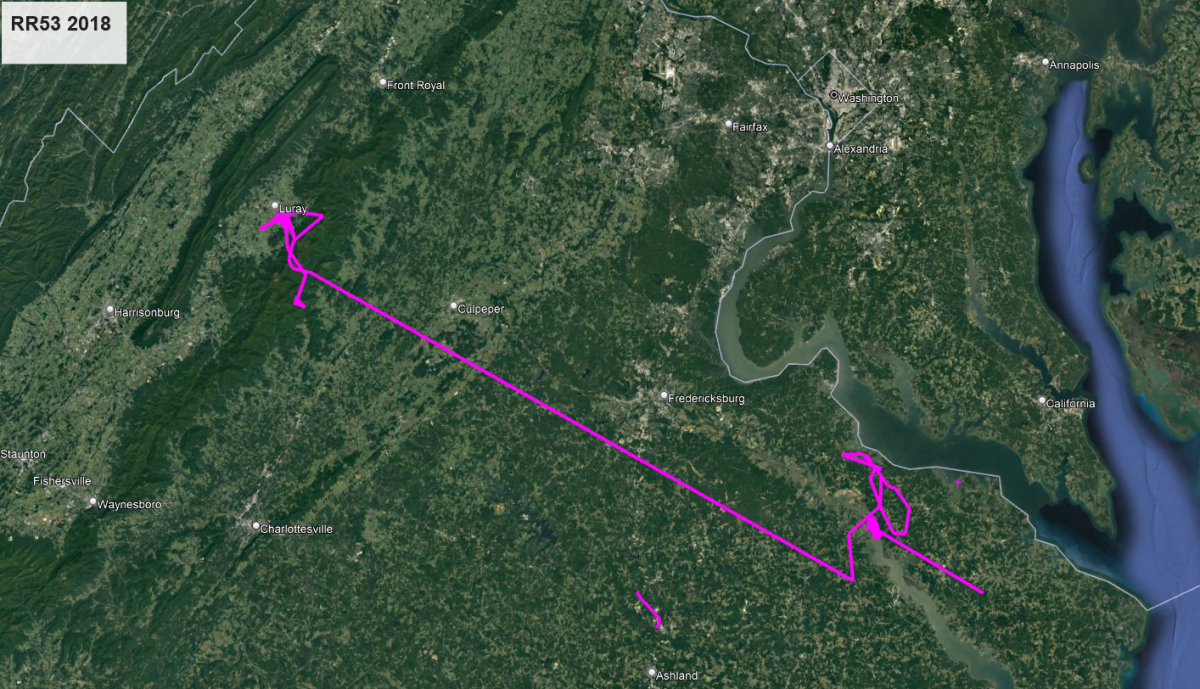 For most of 2019, RR53 centered herself on the Northern Neck of Virginia, between the Potomac River and Rappahannock River. In early February, RR53 checked near Boykins Island at about the same time that Eagle W20 did! In early September, RR53 eagle took a trip across the Potomac to explore Maryland, passing over a few notable landmarks including the St. Clement’s Island Museum and George Washington’s birthplace. The transmitter had another gap in data transmissions at the end of the year. 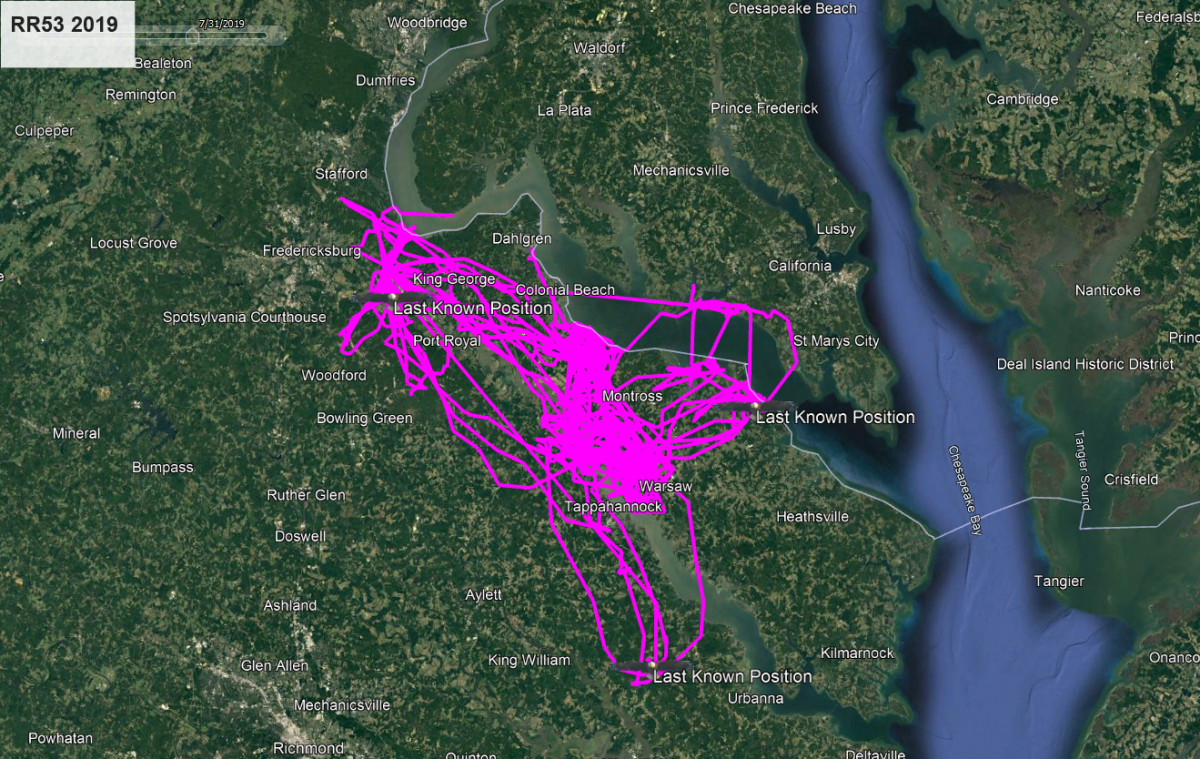 RR53's transmitter didn't provide data until mid-February; when the Center staff were finally able to see what the eagle had been doing, the data indicated that the eagle continued her previous exploration of the Northern Neck of Virginia. She remained in this same general area for most of 2020, though data transmissions were sporadic throughout the year. In November, RR53 made a surprise check-in at Shenandoah National Park, before traveling southeast again to her familiar territory.  In late November, RR53 visited the Dragonville landfill, in King and Queen County, which was a regular spot in Bald Eagle KG09's territory. Through the remainder of the year, RR53 traveled back to Westmoreland County, exploring the Northern Neck area of Virginia. 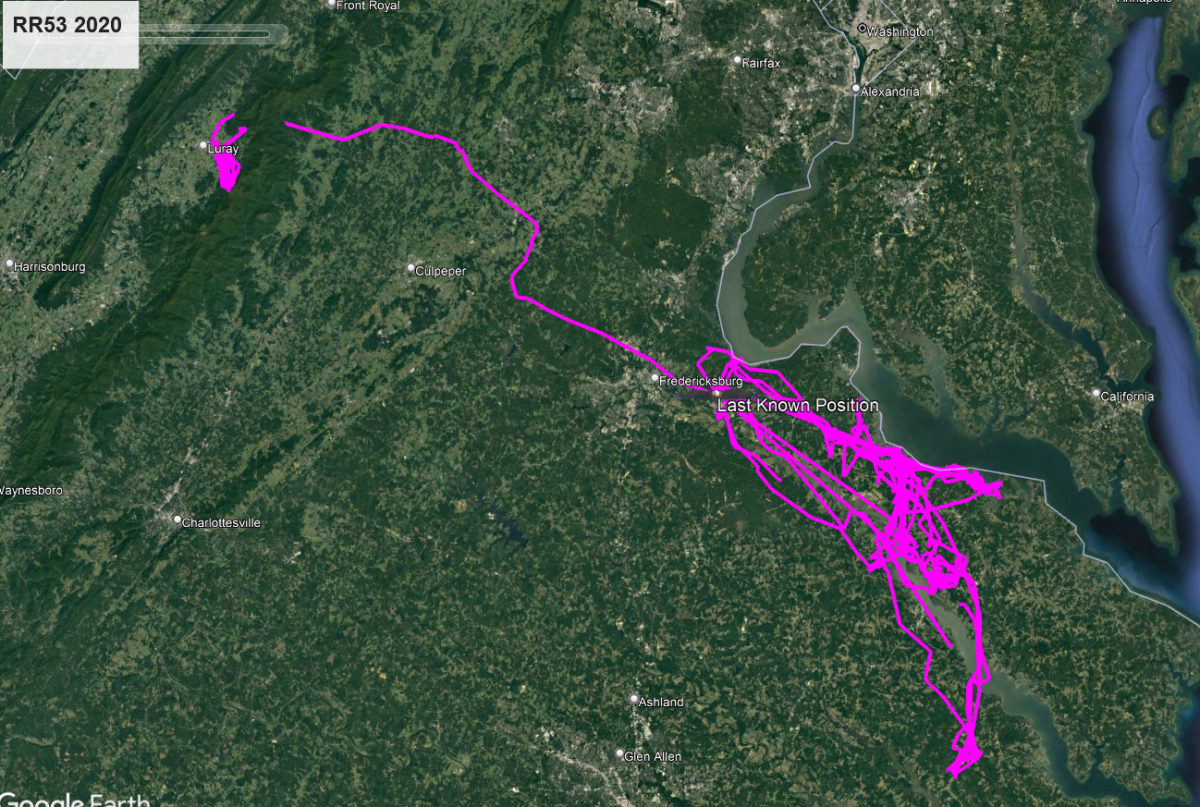 At the beginning of this year, RR53 developed a new pattern of lingering at King George landfill and occasionally taking trips to explore surrounding areas. She looped around Westmoreland, Caroline, and Essex Counties in mid-January, and in late January, flew to the Rappahannock River Valley National Wildlife Refuge before returning back to the King George landfill. In late February, she again visited the Dragonville landfill.  Her flight behavior suggests that she did not have a mate or nest. Throughout the spring, the eagle remained in her established area, flying through the Northern Neck of Virginia. In early June,  RR53 checked in from Fones Cliffs, the ancestral homelands of the Rappahannock Tribe and well-known habitat for Bald Eagles. The tracker stopped transmitting data after June 21. 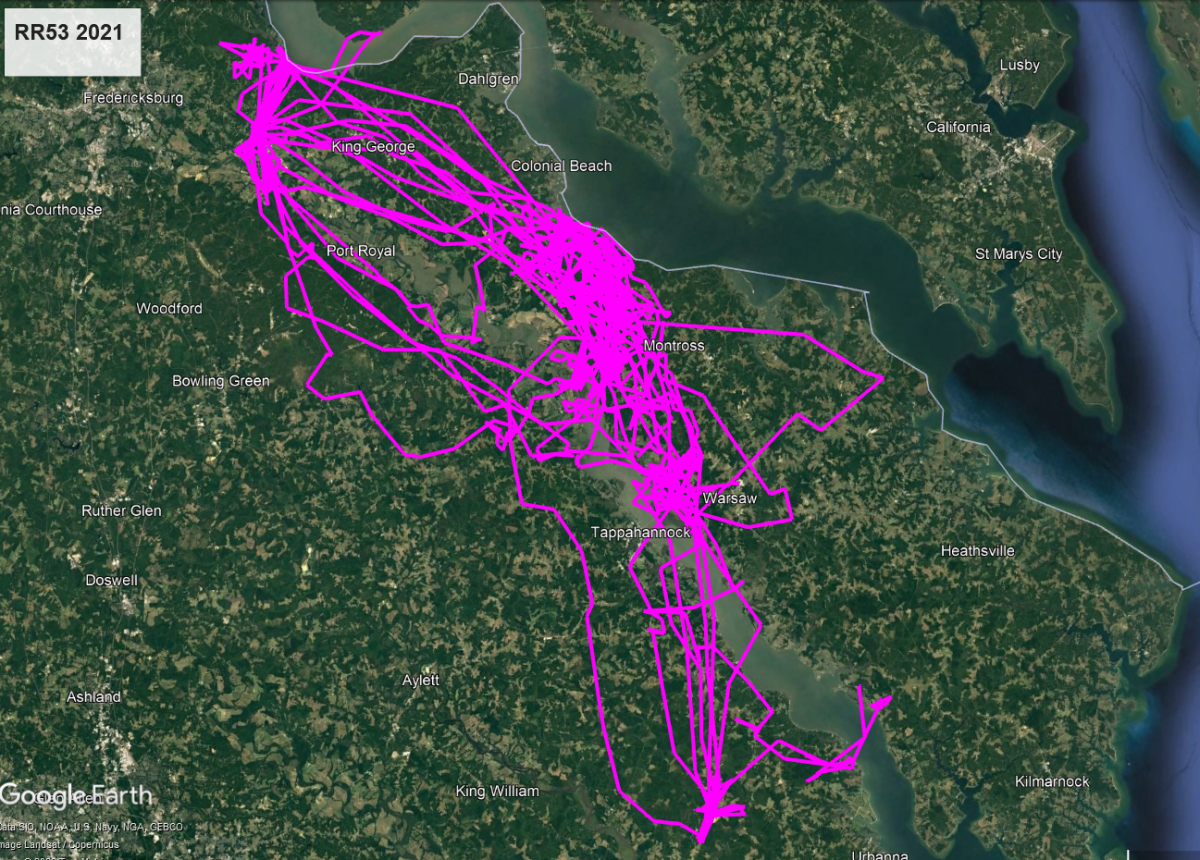 After nearly a year of silence, the GPS transmitter on RR53 began transmitting data in early April 2022. Unfortunately, the data points were all from the same exact location, leading Cellular Tracking experts to suspect the eagle had died. A biologist was able to go to the location and found the eagle's body and recover the transmitter. It's difficult to say exactly when and why the eagle died, though likely sometime earlier this year.